For anyone who didn’t already think they are fascinated and obsessed with dinosaurs…
By timbox129reloaded
On
Well, you guys know what sparked my fascination and obsession with dinosaurs that dates all the way back to my early childhood. It was back in the day of the early or mid 1990’s.

I have these images of these animals in my head, when I was a little baby or toddler. It was a half hour VHS hosted by Eric Broadman and the original voice of Space Ghost (the original 1966 Hanna Barbara cartoon, not the more popular Space Ghost: Coast to Coast and other William Street productions for Cartoon Network and Adult Swim.), Gary Owens. 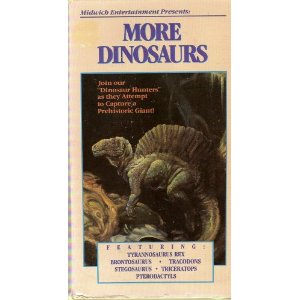 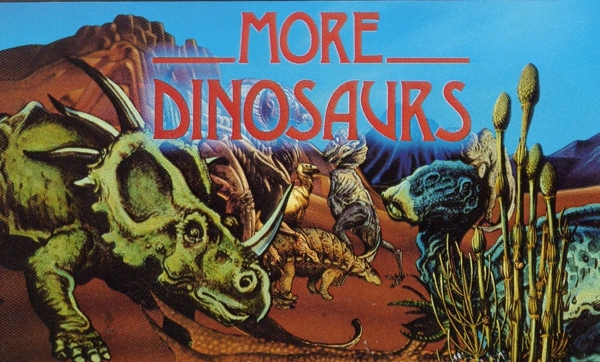 More Dinosaurs. I will tell you about what I saw in full detail…

It all started with Gary Owens meeting Eric Broadman in what turned out to be the home of Donald F. Glut (author of the Empire Strikes Back novelization). It then shows photos of the early dinosaur hunters like O.C. Marsh and E.D. Cope, which are the guys who are involved in the bone wars of the late 19th century. 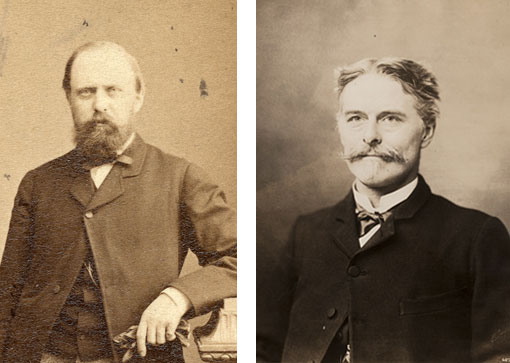 It then shows Eric saying how he could find more dinosaurs, and then zooms in to the mouth of a tyrannosaur and there is an opening title sequences fabricated from images of the classic 1981 William Stout book, the Dinosaurs: A Fantastic New View of a Lost Era (reissued in 2000 as simply The New Dinosaurs, y’know, the reissue of William Stout’s dinosaur book that I have in my house).

It then shows dinosaur caricatures of Gary and Eric.. 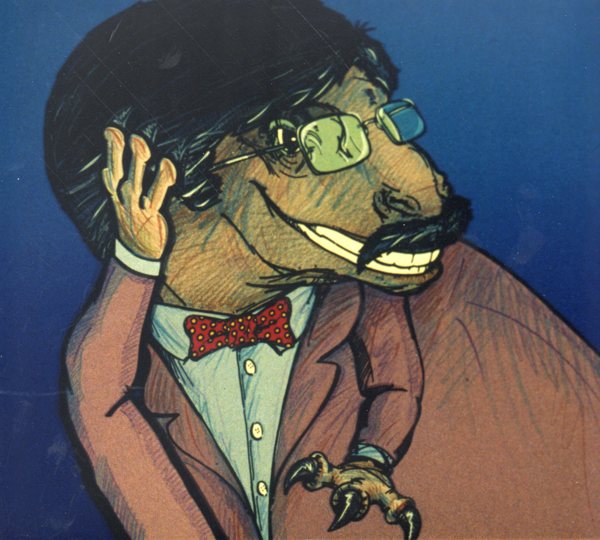 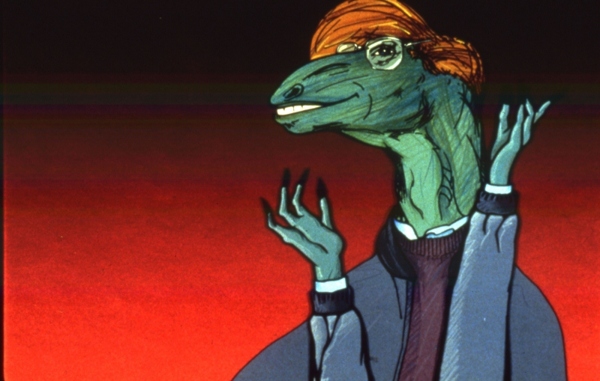 ...before moving on to a 1985 animation festival opening where a punk-dressed, anthropomorphic dinosaur juvenile delinquent making a graffiti outside a building before being chased off by the sounds of police siren alarms and shouts from the off-screen police (“HEY YOU!”) and then show what he wrote in the grafitti… Mokele-mbembe (translating from the languages of the African natives of the Congo region, it meant “creature that blocks the four rivers”), which is described by Herman Regusters (or whatever I say his last name) as a living 35 feet sauropod dinosaur.

It then show Eric Broadman documenting Herman’s failed attempts to find that living sauropod the African natives called Mokele-mbembe via video footage that has recovered from the jungles of Congo.

Eric narrates that Mokele-mbembe’s footprints were discovered in 1776 (around the time the Americans declare their independence from the UK, giving birth to the United States of America) and says that natives were humiliating and eating remnants/members of that sauropod’s family.

It then shows Charles R. Knight’s 1897 reconstruction of a sauropod by the name of Amphicoelias... 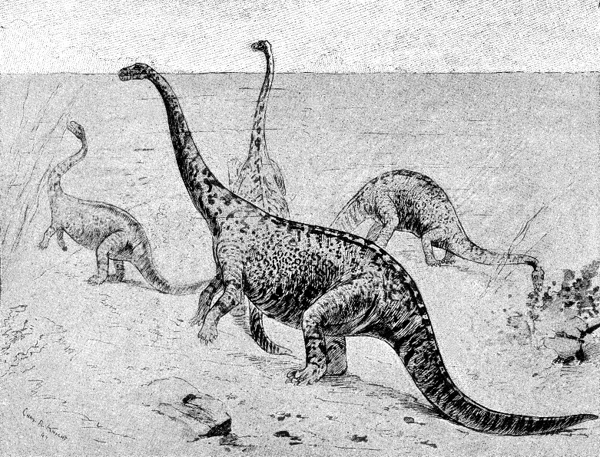 ...and then stills of what was supposed to be Mokele-mbembe swimming in the Congo river that Herman took in his failed attempt to find that dinosaur. 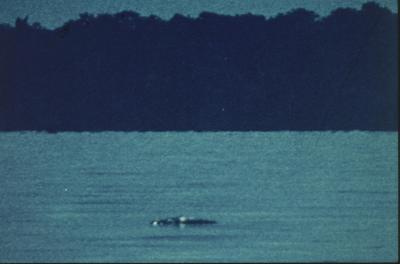 Well, Eric was sitting in some kind of lush tropical park and reminding you and I that the only way to see a living dinosaur was to see dinosaur films like Disney's ill-fated 1985 Touchstone Pictures release, Baby: Secret of the Lost Legend (which feature some great pre-Jurassic Park animatronic dinosaurs or brontosaurs or sauropods) followed by behind the scenes clips of that film (including the making of the animatronic brontosaurs) and a clip from that film as well. 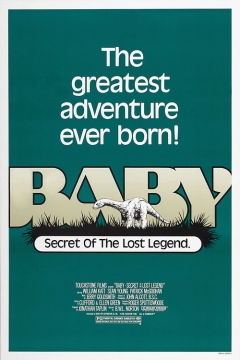 It then show Gary, who, in front of those zany and wacky dinosaur puppets… 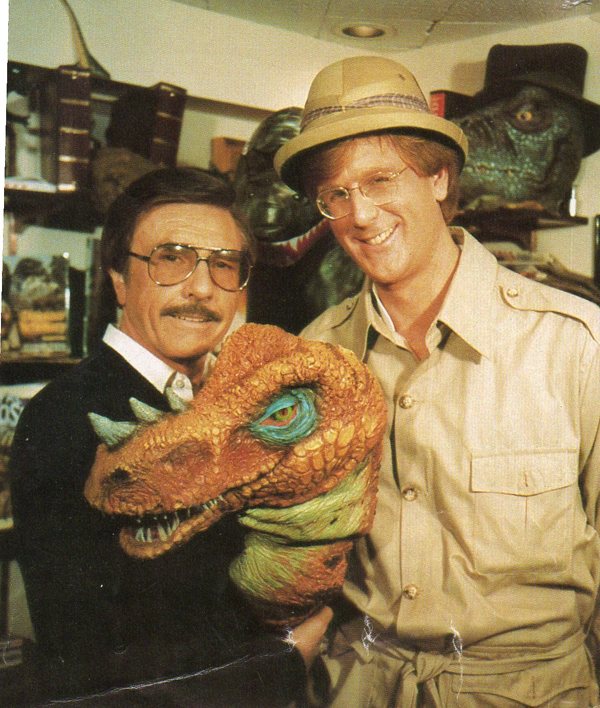 and while giving way to clips from the 1925 silent version of the Lost World, narrates that the first full length feature film to include dinosaurs might be that 1925 silent version of the Lost World, whose stop motion dinosaurs were brought to life by some guy who would later bring to life Kong and the Dinosaurs in the Original 1933 King Kong (later remade by Peter Jackson in 2005). He said it was a huge success in 1925 and indicates that in the climax of the 1925 silent version, an Apatosaurus rampages through London, the capital city of the UK, before diving into the Thames River to avoid capture and as its weight disintegrated the London Bridge it stood upon. 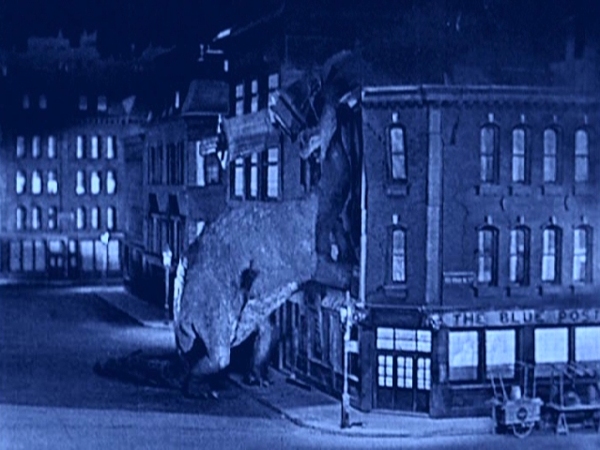 Gary also pointed out that earlier in 1914 (he said 1912), Animator Winsor McCay drew the first widely popular cartoon character with personality, Gertie the Dinosaur as well as showing a clip of that cartoon which precedes King Kong, Star Wars, Jurassic Park, Harry Potter, even James Cameron’s AVATAR (one of my favorite movies despite its flawed story and plot).

It then flashes back to Eric walking in the lush tropical park before moving on to an interview with a paleontologist living in the 1980s named Edwin H. Colbert and followed by clips from what it is used to be a stop motion short with a dinosaur and a caveman and what it used to be Ray Harryhausen’s unfinished and ambitious Evolution of the World project he made between 1938 and 1940 before he canceled his own project after seeing the Rite of Spring segment in Disney’s Fantasia. 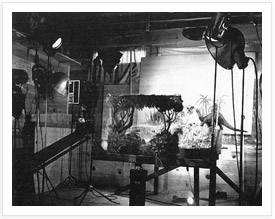 Gary Owens then pointed out that dinosaur movies are different than dinsaurology (which is dinosaur science), and then it shows a color photo of what Roy Chapman Andrews discovered in 1924 Mongolia what is used to be a nest full of Protoceratops egg embryos (now identified as an Oviraptor nest not long after Jurassic Park opens in theatres in 1993, 8 years after this video was produced in 1985 or something like that.).

It Was followed by one of Douglas Henderson’s illustrations that he did for a book called Maia: A Dinosaur Grows Up, Gregory S. Paul’s illustration of Hadrosaurs nesting or taking care of their young, and a sauropod herd illustration that you will find in an 1984 book called Ranger Rick’s Dinosaur Book as well as a illustration of an installment of the ZooBooks series where a baby Protoceratops hatches from its egg, Gregory S. Paul (the author of the classic 1988 book, Predatory Dinosaurs of the World) being interviewed and Mark Hallett’s 1985 contribution for the ZooBooks Dinosaur Book showing a herd of Triceratops defending its young from a pair of striding Tyrannosaurus Rexes, followed by a clip from test footage of Willis O’Brien’s unfinished 1931 Creation Project which led directly or indirectly to the original 1933 King Kong. It shows a Triceratops watching over its young. 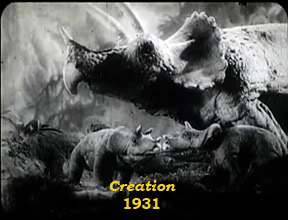 It then shows Eric traveling through the country side and passing and bumping through sculptures of a Stegosaurus, A Triceratops, what it look like A Diplodocus, and a Dimetrodon (which is a non dinosaur which lives in the Permian period which is way before the dinosaurs took over the earth), before being given some reward from some old guys.

Eric travels through a city full of dinosaur-related signs, before meeting a hitchhiker before stopping at the Dinosaur National Monument in Utah, where he was interviewed by a guy working in that quarry.

Eric then destroys the Quarry which collapses and reveals a scene in the Mesozoic showing a Stegosaurus and a Apatosaurus fleeing from what it look like a Tyrannosaurus or an Allosaurus which was stopped by Eric who warns the animal that a flood is coming, only to be wiped out, along with the dinosaurs by a flood engineered by a dinosaur surfer before being buried in the earth which then breaks apart and dug up by paleontologists, as Gary as narrator tells us of a mistake involving the Brontosaurus/Apatosaurus head controversy until cutting to Eric in skeleton form collapsing from his pilt helmet.

Gary then peers into a skull of a Tyrannosaurus... 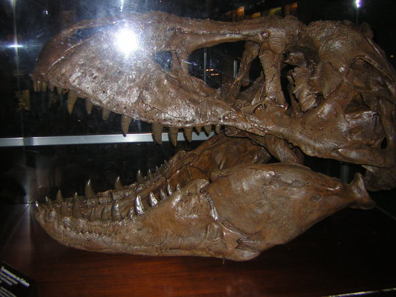 ...before talking to a curator at the Smithsonian (that museum with an African Elephant in the Museum’s entrance) who shows us the history of life on earth up until the dinosaurs’ extinction.

It then shows a skit featuring Eric visiting children in an elementary school being obsessed with dinosaurs, followed by a clip from the 1980 Will Vinton Claymation short, Dinosaur (not the 2000 CGI film from Disney that was notorious for placing talking CGI dinosaurs and lemur-like primates in digitally enhanced and manipulated live action footage) and by Eric playing with clay representations of a dinosaur and a pterosaur.

It then shows Edwin talking about Dinosaur footprints as well as a brief tour of what the dinosaur hall at the American Museum of Natural History probably look like when this video was made and put it on video store shelves in 1986 or so. 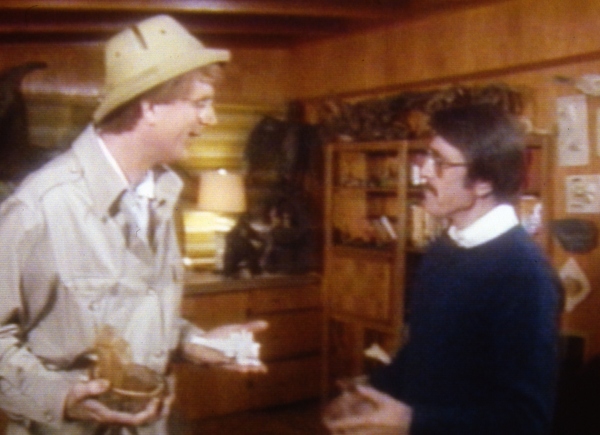 It ended with Eric reuniting with Gary and being spotted and stalked and pursued by a cheesy-looking Tyrannosaurus Rex before being gobbled up by the cheesy-looking dinosaur as the video and its closing credits were brought to a close.

It ended with a video promo of a 1987 dinosaur video titled Dinosaurs! Dinosaurs! Dinosaurs! (which is well known for Gary Owens’ transformation into a anthropomorphic stop motion animated talking dinosaur (paging the 1991 Disney/Jim Henson TV series, Dinosaurs) (That video actually came out after or alongside a video on the prehistoric mammals that took over after the dinosaurs became extinct, titled Prehistoric World), as well as a clip of the dinosaur parade from that video before closing out with footage of children playing alongside a Triceratops outside the Smithsonian before the video fades to black.

Note to self: More Dinosaurs and other prehistoric life shows from Gary Owens and Eric Boardman (especially those that used to air on the Disney Channel) are now available on DVD.

And so, besides my encounter with that video, can anyone please tell what sparked the fascination and obsession with dinosaurs of any of you who likes dinosaurs (even if it dates all the way back to the early childhood of even some of you), in addition to the video that I’m talking about? I really appreciate it. Thank you.
8
Login To Vote!
More Articles From timbox129reloaded