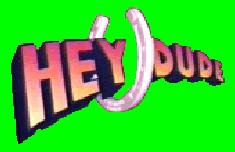 It was set at the fictional Bar None Dude Ranch in Arizona. The show focused on the always amusing predicaments the teens and the ranch owner, Mr. Ernst, got themselves into. I liked this show. It had a great cast and lots of funny moments. Mr. Ernst was very funny. I really miss it.

In every generation there is a Chosen One. She alone will stand against the vampires, the demons and the forces of darkness. This was a great action packed show. Sarah Michelle Gellar played the part of buffy very well. Just a shame this show came to an end it was very good.

Vallery Irons (Pamela Anderson) is a young and beautiful lady which enjoys life full of glamour and fame filled with style & fashion and has no idea how hard it is to be a bodyguard until she joins the crew and always gets into danger althrough the crew promised her that she'll not. Talk about action, this show is full of it Pamela anderson rocks, and this show just briten up her career more. V.I.P. was a great action packed show.

The show mostly surrounded around Tony, who took a Job as a housekeeper at Angela's House. Tony Danza is a very funny man, and this show showed him at his best. Thats why I liked it so much cause of all the funny antics and things he said and did on the show.

35. Clarissa Explains It All

Clarissa, as some preferred to call it, featured plot lines that teenagers can relate to. Clarissa's family members were her annoying little brother (Ferguson), her health nut mom (Janet), and her architect dad (Marshall). Her next door neighbor, Sam. Awesome show, one of the greatest on Nickelodeon. Clarssa Darling always talked to the camera which made it exciting cause you always knew what was happening.

The honorable Judge Harry T. Stone is a young hip, jeans wearing, liberal eccentric; and he presides over New York Manhattan Night Court. The best part of this series was Bull and Dan very funny and hip men, they would do anything to get laughs. I liked it cause of the funny things and that it teaches people how a courtroom works.
33. COPS

Called the original reality show, COPS hit the airwaves in 1989, putting camera crews in police cars all across the United States. Adopting the Cinema Verité style of documentary filming, COPS uses no narration, depending completely on the police officers and the footage shot as it happens to tell the story. This action\comedy reality series really shows how brave cops really are, and that they will do naything to get there men\women. That's why I enjoy it.

Set in small town Lanford Illinois, the show followed The Conners, a blue collar family with a humerous backbone, through the trials of: life, marriage, raising a family, and making ends meet.

Charles in Charge is an American sitcom series broadcast on CBS which starred Scott Baio as Charles, a 19-year-old college student working as a live-in babysitter. This show was a classic. Charles is awesome I loved this show cause of how Charles acted and what he did. He seemed liked a great babysitter to me.

Growing Pains was about a family of five, the Seavers, who lived on Long Island, New York. Jason Seaver was the father, a psychiatrist, who had his practice at home. (From the 1st to the 5th season) Maggie, his wife, was a journalist who worked for the Long Island newspaper in the first three seasons of the sitcom. She got a job as the news anchor for channel 19 news and worked there through the middle of the 5th season when she decided to stay at home. They had 4 children Mike, Carol, Ben, and Chrissy. Loads of laugh in this show.

Stay tuned for part 3 of shows 28-18, I know i said to 20 in this article but I didnt wanna add that many. anyways stay tuned for Part 3 coming soon.
-4
Login To Vote!
More Articles From alexmackfan