Where Were They Then

A look at resurrected celebrities and where they were in their heyday.
By NostalgicJester
On
We have seen the sad stories of celebrities that have outlived thier fame. We have seen thier lives played out before us as if we were sitting and watching a beautiful flower wilt and die. The famous rockstar who used to play to sold out venues that your neighbor just hired to do their daughter's wedding. The child star that once charmed the hearts of the very people he is now serving burgers to. The blockbuster film star that is desperately trying to recapture his prime by releasing not one but two updates to his most famous characters (Stalone you know what your doing).

These are sad stories but there is hope for past celebrities. Not every star that enjoyed fame during the Regan or Bush (That's daddy Bush) administrations has to hope for a drug bust or Surreal Life to be on TV. The following is a happy tale of a few celebrities that are seeing a resurgence of thier fame and are now living lives they can be proud of. (Sorry Dustin Diamond but you have giving the name Screech a new meaning and you really really should not be proud of that.)

Now:
One of the greatest (legal) ways to find your way back into the public eye is to host a popular game show. Many on this list have done this but non have been more enjoyable to watch then Howie. I love watching the admitted germaphobe Howie get hugged or high-fived by screaming strangers. He cringes each time a woman asks to kiss him on his bald head but milks it when the models greet him with their "Hi Howie" each night. We get to see Howie crack jokes at the expense of the ridiculous contestants and they never even know he's doing it. Deal or No Deal may not require any strategy, or for some contestants, formal education but it sure gives us a great hour with ol' surgical glove loving Howie.

Then:
Howie started out as a stand up comedian who could have people rolling in the aisle long before he pulls his trademark glove routine. He was funny and fresh and basically a far less annoying Robin Williams. He also has some real acting chops. His short stint on Gereral Hospital showed us that. However, his best roles are the roles that we used to love as kids. Four roles come to mind that will stick with me no matter what Howie does now or tries to remind us of from the past. Those roles are Maurice, Animal, Gizmo, and Bobby. 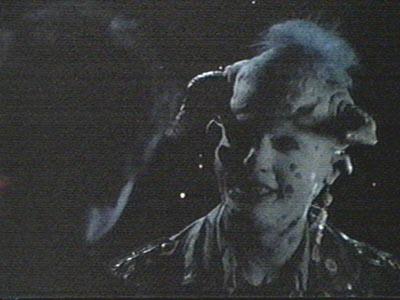 Little monsters was a mess of a movie that really made now sense but it was the manic performance of Howie as Maurice the monster that made the whole mess worth watching.

As much as we love to see Howie it is equally as fun to hear Howie and his best voice roles are a staple of any childhood in the 80's or 90's.

We remember Animal and how funny he was as a baby and Howie brought a great amount of hilarity that kinda fell off once Dave took over. 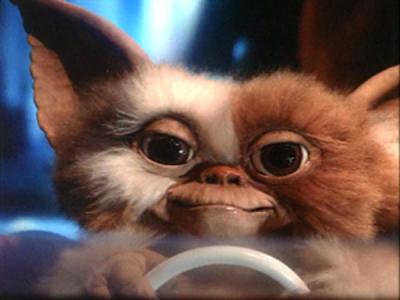 Gizmo is everyone's favorite Mogwai and it was Howie's high pitched and almost unrecognizable voice that made it so. 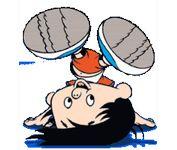 And let's not forget the cute little imaginative Bobby. This little guy was a great character that I know I will never forget. Don'tcha know?

So know that you remember Howie let us look at America's favorite dad: 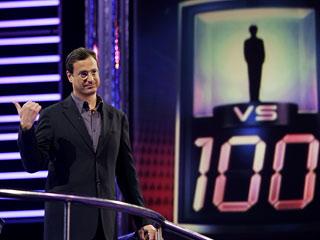 Now:
Bob has also gone the hosting route. Although 1 vs 100 is a hard to understand mess of a game show, anything with Bob is fun to watch. I won't go into the game show because frankly, I don't watch it. What is funny about Bob is the fact that he is back in the public eye but the public eye's view is a little blurry now. The Bob we see now is a lot different than the Bob we knew then. (Although the Bob we knew then was exactly the same but he was paid to be wholesome by the Olsen Twins, I mean Full House execs.) Bob has come back with a force and is desperately trying to come out of the shadow of squeaky clean Danny Tanner to show us just how dirty he really is. If you have seen The Aristocrats or Farce of the Penquins you know what I mean. Throw in a dash of the dirtiest joke ever and add that annoying high pitched voice of his to a sex-crazed penquin and you get a recipe for a dirty little Saget. And yes, we still love him.

Then:
Bob was in our home twice a week for years and is now in our home at least four times a day. He had two weekly characters that we watched week after week and is now on hour after hour on like 5 channels. Those characters were Danny Tanner and Bob Saget (I'll explain in a minute). Remember these guys? They were the two dorkiest men alive and for some odd reason, we loved to see them . 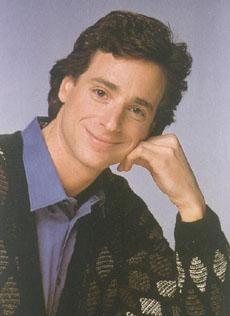 Danny was the clean freak that loved his 3 little girls Michelle, D.J, and Stephanie more than anything in the world. Danny, his best friend, and his brother-in-law raised the girls to be billionaires, a Christian speaker, and the host of Pants- Off Dance-Off. 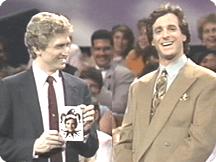 Now let's look at another resident of that house that was just too full:
John Stamos 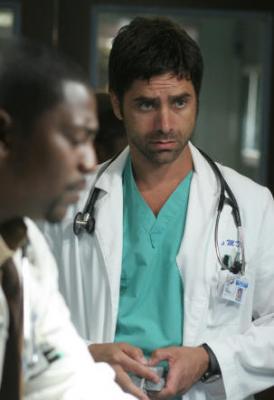 Now:
John has tried many times to get back to fame and fortune. He has filmed many failed pilots and had a few failed series primeres. He even tried to stay married to some model whose name escapes me right now. (I know who it is but she is currently playing a man on TV so I have lost the ability to recognize her as hot any more.) It wasn't until he became a regular on ER that people remembered how great this guy really is. It's funny because his resurrection is what saved a show in desperate need of a resurrection as well. Now John is back and is yet again making women swoon and men wish thier 5 o' clock shadow look as good as his.

Then:
John was all over the place. This guy was a new Fonzie. He even "borrowed" more than any other Fonzie wannbe and he still got away with it. His leather jackets and feathery black hair could literally make woman cry. Even when Jesse Cochran, or was it Katsopolis, left the motorcycle behind and became a tame father figure, no one cared because he oozed awesome. To be John Stamos in the 80's and 90's would have been any man's dream. But then again how could John not be considered sexy when he stoop in between Bob Saget and Dave Coulier? (Oh that's mean. Have mercy.) 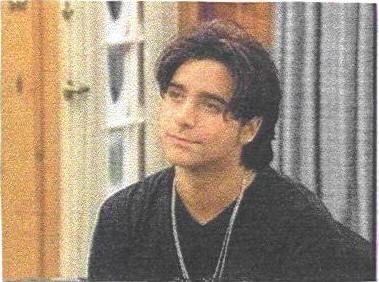 Jesse was and will always be the coolest freaking uncle on television. (Remember Uncle Buck was a movie.)

Now that we have covered these three guys lets turn our attention to a couple ladies. Although she does make some controversial headlines this lady star has still found legitimate fame: 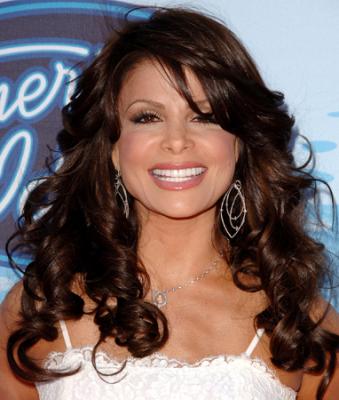 Now:
Each year Paula is involved is some sort of controversy surrounding her job as an American Idol judge but Paula really doesn't care. Why? Because it is 2007 and people are talking about Paula Abdul, that's why. She has been a judge on American Idol since the "Search for a Superstar" concept crossed the pond in 2002. She has to endure terrible singing, gay dudes professing their love to her, Simon Cowell, and worse, Ryan Seacrest. Who wouldn't be depressed and reaching for the liquor?

Then:
Paula was hot. In more ways then one. She had a successful career as a dance choreographer. She was behind the scenes and things were great. Then she either helped or really really hurt her carrer. She released a few albums of her own. If she had remained a choreographer she may never have gotten to be a judge on American Idol or have her current fame. Then again if she had remained a choreographer she may have never been the object of ridicule she sometimes is now. When tripping over your dog is big news than maybe fame isn't all it's cracked up to be. 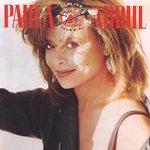 If she stayed a choreographer she might not be as famous in the public eye as she is now, but she would have remained famous to people that could have made her serious money. Plus the 90's teen popstars might have had better dance numbers with her help.

Now finally lets look at a woman who has had so much fame recently it is like she never had an earlier career. A woman so famous for what she does now that people have completely forgotten that at one point people liked her. She is in the headlines more often now than she ever was in her prime. Who could this woman be? Come on you really don't know? 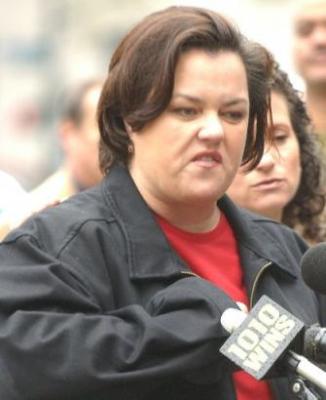 Now:
If you listen close you may actually be able to hear her yelling about something she really doesn't have all the information about. She is also currently between jobs as the loud obnoxious co-host of the view and the loud obnoxious whatever she does next. (Now I know I said these people were proud of what they do now but if Rosie wasn't so full of pride would she really do anything she does?)

Then:
She was loud and obnoxious back then too but loveable. Come on, try to remember and lets give her past self a little credit.

(I could post a pic of Rosie as Betty but isn't this a little better?) Ok now hear me out. Rosie was a bad casting choice for Betty Rubble but you have to admit she had the laugh down and still made her an endearing character. Watch it and forget who Rosie is now and you might agree. 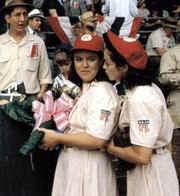 Who better than a loud and annoying character like Doris Murphy to take your mind off of Madonna's annoying performance? Thank you Rosie for that much at least. 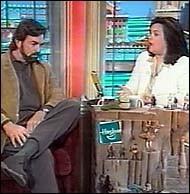 There was a time when many daytime viewers consciously tuned in to watch Rosie do a talk show. It was a fast paced, crazy, fun show. And it was the last thing Rosie did before she went totally nutzo. Obviously I chose this picture on purpose. That is Tom Selleck Rosie is talking to and we all now that the Rosie/Selleck thing was when we all realized how crazy Rosie was getting.

Well that is just a quick look at 5 resurrected celebrities. There are more but these were fun to write about so for now I will just stick with them. Tell me of others you have seen and let me know what you think of the article. Thanks for reading.
15
Login To Vote!
More Articles From NostalgicJester