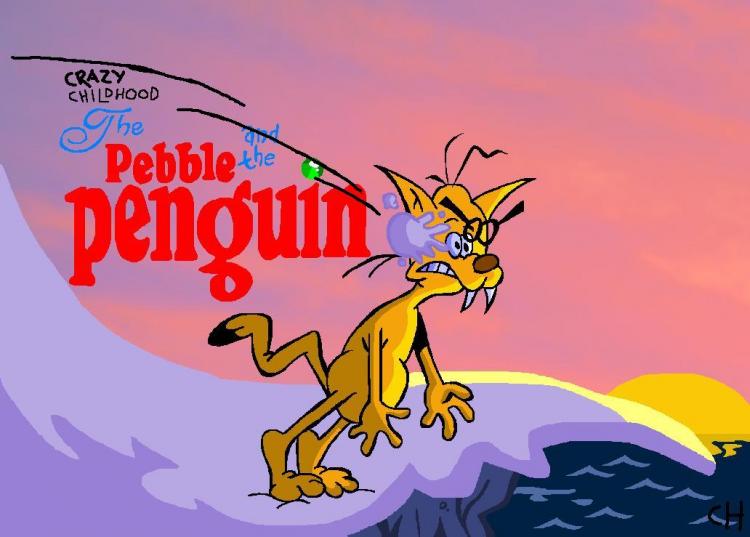 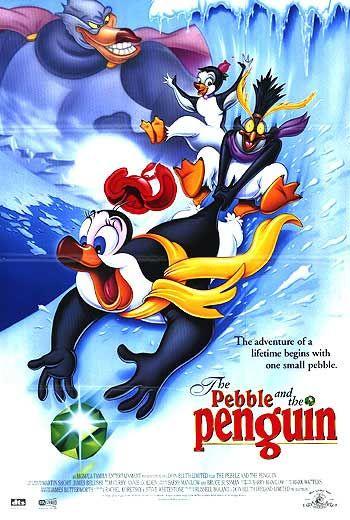 All righty, fellas. I'm just gonna go ahead and say this in front of all the readers of this article:


I never liked the works of Don Bluth.


Yeah, just keep booing, you whiners. Yeah, even as a kid, I didn't care for his films. I will say that I haven't seen what is considered to be his best work like The Secret Of NIMH or An American Tail, just his more mediocre ones. On the plus side, his films look great. They have first-rate animation, lush backgrounds, and interesting character designs. It's just Don Bluth's storytelling techinques that make his films forgettable. It feels like dumbed-down Disney. 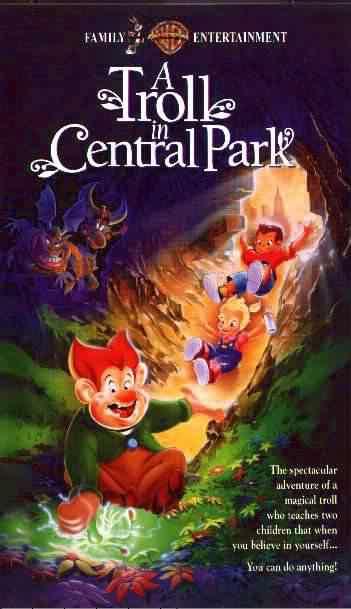 I'll settle with the movie Troll, thank you.


A lot of people say that his worst film of all time is his 1994 outing called A Troll In Central Park. Yeah, that was film was vomitingly cutesy, but at least looked nice. Plus, in my opinion, his all-time worst would have to be the one that came out 1 year later, The Pebble & The Penguin. 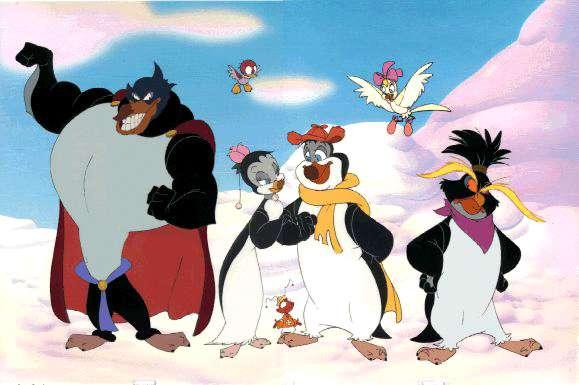 We have our publicity photo!


When I first saw this film as a kid, it was in 1st grade, when we were learning about penguins. When we were finished with that, we watched this. It was probably the first time in my elementary school life that I wanted to get back to work instead of watching that movie.

Well, cut to years later, when Nostalgia Critic's review of this film came out, and I was surprised that he actually didn't hate it. After watching the review, I figured I could give the film a chance and gave the film a watch not too long ago. The result? Well, just you wait.... 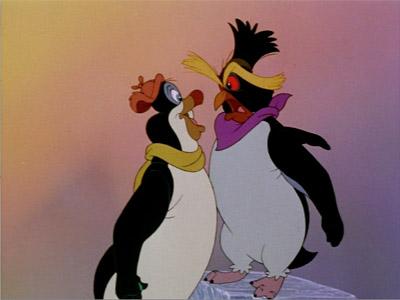 I don't know what to watch: Rocko the penguin or Rocko's Modern Life.

A shy penguin named Hubie (Short) plans to present his betrothal pebble that fell from the sky to the one he loves, Marina (Golden). But the evil penguin Drake (Curry) gets rid of Hubie, then he ends up on a cargo ship. He escapes with the help of a rebel penguin named Rocko (Belushi), but has only ten days to give the pebble to his beloved. 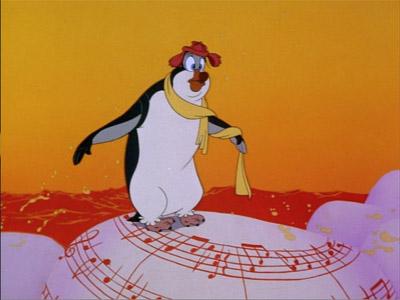 I watched the movie on Youtube, and I guess the movie was from the full-screen DVD from 2001. As I watched it, I couldn't believe that they let this film in theaters. This film is FILLED with mistakes. You'd think that Don Bluth would be the last guy to have his film have mistakes like this: 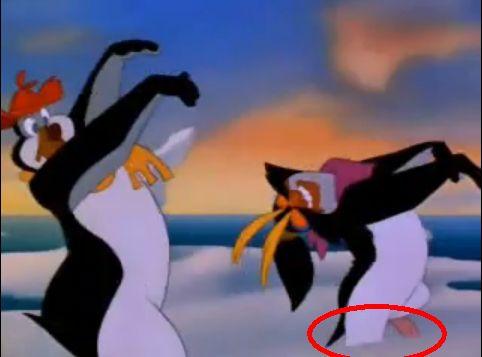 This is the majority of what kind of goofs you'll see in the film, or at least on Youtube: unfinished character colouring. Usually at the bottom of the character. There's also unfinished vines and water galore as well. But you know what? I don't think Don Bluth and his animation studio were part of this problem. MGM, the studio who released the film, made some extensive changes, very late in the film's production. Scenes were cut, characters were removed, and voices were re-recorded. While making these changes, some cheap Hungarian studio was given the task of finishing up the ink and paint work, which resulted Don Bluth uncrediting himself from the film. I'm guessing that the Hungarian studio responsible for their sloppy painting job is out of business, so the world is a better place in a way. 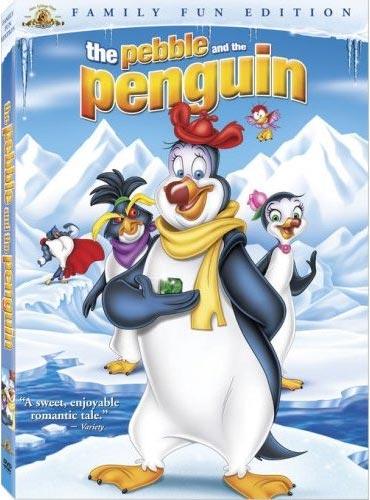 Now to be fair, Gary Goldman, the co-director, supervised the color restoration for the 2007 reissue DVD, so all the errors are missing and it looks a-OK. But the film is still pretty lame.

Another thing about this movie that's bad are the Barry Manilow songs. I wouldn't mind the songs if they weren't sung by some of the most annoying singing voices in a cartoon. The Good Ship Misery is a good example.

Plus, how on earth can the Rocko penguin possibly fly? I never got it as a kid, and I still don't get it now. Penguins can't fly and never will, and even a Disney rip-off should understand that. 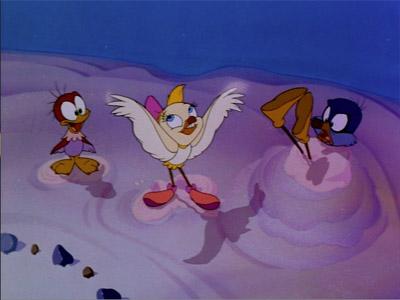 Oh, and don't even get me started as to why there are three canary-like birds in Antarctica.

There are two songs that are the least annoying: the villian's song, Don't Make Me Laugh, and Marina's variation of Hubie's love song at the beginning of the film. Probably because they're sung by people with good singing voices.

The best character is, of course, Rocko. When you think about it, he should've been the hero of this movie. He has a better personality, a better rival for Drake, and wouldn't know when to give up when in a jam. Hubie is just a sap and we get too much of that in animated films nowadays. Right, How To Train Your Dragon?

"Once I marry Marina, there shall never be another dawn."

Plus, Drake isn't that bad of a villian. True, he doesn't do much, but it's hard to dislke him. Tim Curry pulls off his American accent well, and gets some of the better dialogue in the film. But does anyone think that they should've replaced Drake's dialogue with The Lord Of Darkness's dialogue from Legend? 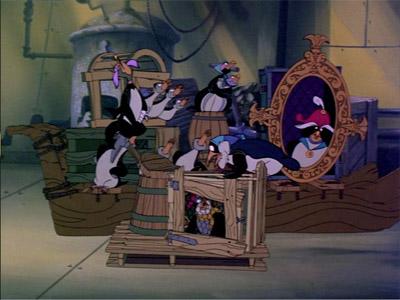 They really know how to put the "Misery" in The Good Ship Misery. 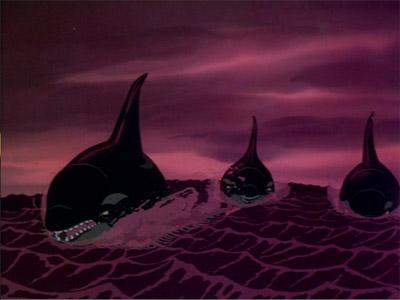 Looking at it now, I guess The Pebble & The Penguin isn't that bad of a film as I though it was, but it's still pretty light-weight. The story is thin, the hero is a wimp, and a majority of the songs are annoying. But the voice-acting is all right, the supporting characters are far more interesting, two songs are passable, and while the inking is sloppy, the animation is still Don Bluth-excellent. Plus, a short running time helps.

Is it the worst film ever? No. Far from it. I still think it's Don Bluth weakest film, seeing how I watched more of his other films more as kid than this one. But, in all homesty, I'll take this over Happy Feet anyday.