Cartoon All-Stars to the Rescue
By Nails105
On
Before we begin this article, I suggest you read this part first. I seemed to have noticed that whoever read my "Top 10 Hottest Cartoon Women", they really didn't give it a good response. I can understand that. That really wasn't my best moment. But to those who read it, I must point out one thing: Didn't I say at the end of the article "if you don't agree with my opinions, make your own article" ? Everyone has their own opinion at who's hot and who's not, and those opinions were my own. I would also like to point out that a particular person said that the article was the reason I don't have a girlfriend. To whoever wrote that comment, I may not have have a girlfriend, but it doesn't mean that you can tell me that I can try to find one. I'm not mad at you, and don't get mad at me, I'm actually kinda mad at myself for writing that article. Anyways, if that article is blown into obscurity, I guess that's my own fault, not yours. I sincerly apologize, and hopefully my next article will be more enjoyable. Let's hope we have more great imes together. Thank you for your time.Anyways, now to the "Crazy Childhood" review. Blah, Blah, Blah, Blah, was our childhood worth it, Blah, Blah, Blah. 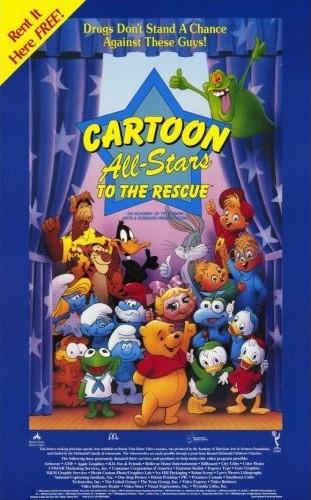 I just LOVE how Garfield is behind Baby Kermit from "Muppet Babies", as if Garfield had no part in this special. As a matter of fact, he isn't. He rarely does anything in here. I was a HUGE Garfield fan, and I still am, it's just when I saw this cartoon in 1st Grade, I was crushed to see Garfield get squat. Nada. Zip.

That's one of the biggest problems in this stinker, and I haven't started this review yet.


My opinion on this toon? It was WEIRD. 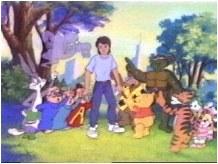 Why was it weird? Well, I'll take about that later.

The story's about a young kid named Michael who has a drug problem, which, of course, is unknown to his parents. Mike sinks to a new low by stealing his sister's piggy bank and using the money inside to buy more drugs, or as Simon the Chipmunk refers to it as : "Meeariwaana". 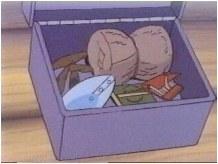 Apparently, our childhood icons such as Alvin and the Chipmunks, Alf, Bugs Bunny, Daffy Duck, etc. find out about Mike's drug problem and it's up to them to make sure that he doesn't go the wrong way in life. 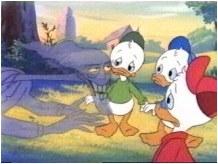 The villian is a sinister puff of smoke named.....well, Smoke, played the late-great George C. Scott. Smoke basically tries to encourage Mikey to keep doin' drugs and try to smooth-talk him outta any ridiculous speech by the toons.


WHAT'S WRONG WITH IT?
It's weird. That's pretty much it. It's just weird. How can you make a drug-prevention cartoon when most of the scenes show a lot of messed up crap that shows hints that the animators were on a type of drug?

The strangest scenes include Mike and the Muppet Babies take a roller-coaster ride through Mike's drug-stuffed brain and when Mike has a carnival-related breakdown. 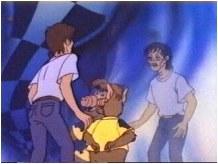 Another problem is that President George Bush introduces the cartoon. Need I say more? 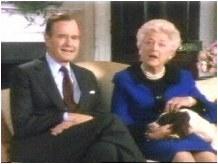 The final problem is the song, "Millions Ways to Say No".
It's downright obnoxious, and yet it's written by ALAN MENKEN. The same guy who wrote the songs from "Aladdin" and "The Little Mermaid". How could he write this song? I guess it wouldn't be so bad if it weren't sung by a bunch of cartoon characters with some of the most annoying voices ever (e.g. Baby Piggy, The duck nephews from "DuckTales").


WHAT'S GOOD WITH IT?

The premise. It's a pretty good one. If there's someone to tell us to syop smoking, it's the icons we grew up with. The animation is pretty good for TV standards, too. But that's about it. The rest is.....(shudder).

"Cartoon All-Stars to The Rescue" is worth a look for nostalgic value. The entertainment value leaves something to be desired, though. The special kinda mixes the message about drug prevention when the visual style clearly shows that the animators were on drugs themeselves.


Well, that's your "Crazy Childhood" review for today. If you have any suggestions for anything for me to look up, please comment below. No extremly negative comments. And remember, stop Simon the Chipmunk from saying "Meeariwaana" again.
[/b]
25
Login To Vote!
More Articles From Nails105