All you Disney fans enjoyed them, and here are my choices for the best.
By dalmatianlover
On
We all love to watch our favorite movies over and over and over again. When it comes to music, well, most people tend to get annoyed by songs in movies. All those "Land Before Time" sequels are nauseous examples. The only exception would be the Disney movies. Walt Disney was a flat out genius, and the movies his company has made had songs that stand out as some of the most memorable movie songs in history. I'm mostly referring to the love songs, but I'm going to take a little different approach in this article. I'm going to be listing my pics for the best musical extravaganzas in the Disney films. What do I mean by this? I'm talking about the upbeat songs that you'd want to get up and dance to! So without further ado, here I go again with another countdown...my pics for the Top 15 Disney Musical Extravaganzas! 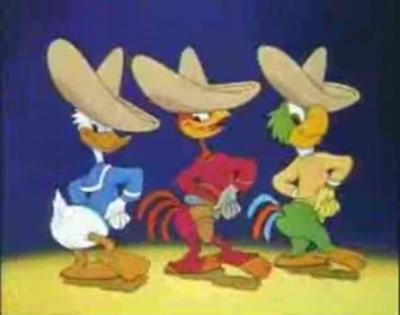 #15 - "The Three Caballeros" (The Three Caballeros)
Disney's famous Mexican anthem is really the perfect song to sing alongside your two closest friends in the whole world. Even though, this song is not a real mind-blowing song, it's got a nice bouncy beat, and you can dance to it. It's quite interesting that three male birds all from different countries managed to bond together to make this wonderful song. 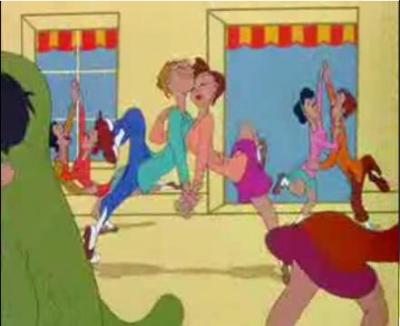 #14 - "All the Cats Join In" (Make Mine Music)
Probably one of Disney's most overlooked musical numbers. Well, it is from one of the package films from the 1940's, so it's no wonder it's so underrated. The cool cats of the 40's and the jazzy wonders of Benny Goodman's orchestra sure do make the perfect marriage. 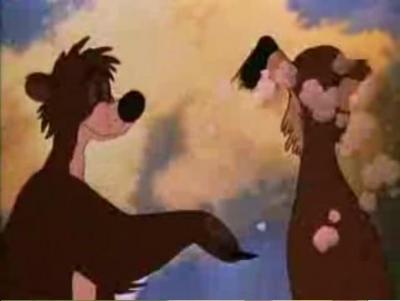 #13 - "Say It With a Slap" (Fun and Fancy Free)
Most people know "Fun and Fancy Free" more for "Mickey and the Beanstalk", but not as many know about "Bongo". A group of bears get together and make love to each other by slapping each other in the face, and they dedicate a whole song to it. From my perspective, it seemed to work pretty well. 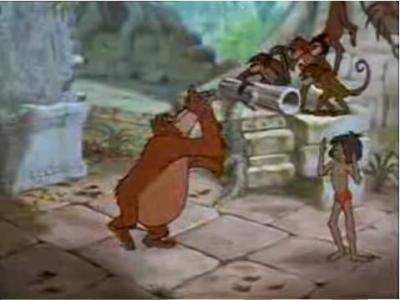 #12 - "I Wanna Be Like You" (The Jungle Book)
Now, here's a real catchy musical extravaganza. King Louie wants to be a man, and he says it by performing this jazz song along with his monkey soldiers and a surprise entrance from an incognito Baloo. "The Jungle Book" is a true gem of Disney's, and this segment rocks! 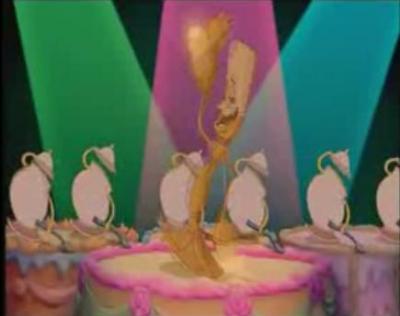 #11 - "Be Our Guest" (Beauty and the Beast)
Leaving any number from "Beauty and the Beast" off of this list would probably be a sin, but that doesn't necessarily mean it has to be #1. The songs in that movie are all so great, that it makes you feel like your watching a Broadway musical, but aside from the part where Belle dances with the Beast, it's the "Be Our Guest" segment that really made the movie. Lumierre invites Belle to be their guest by performing a big musical number on the dining room table along with all the other flatware and appliances. Dinner and a show. What more can you ask for? 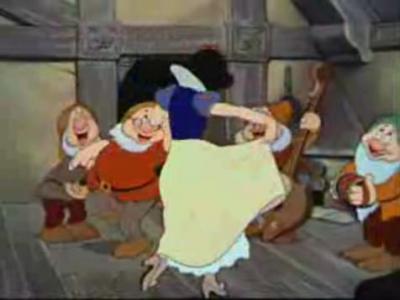 #10 - "The Silly Song" (Snow White)
Walt Disney's very first feature length film is still one of the best, and even today, it has a huge fan base. When doing his movies, Walt was the kind of guy who always wanted to go beyond the bare minimum, and this particular segment of "Snow White" showed a true example of that. Not only is it a mind-blowing number, but it's also one of the most fun moments in Disney history; just ask anyone who's seen the movie. 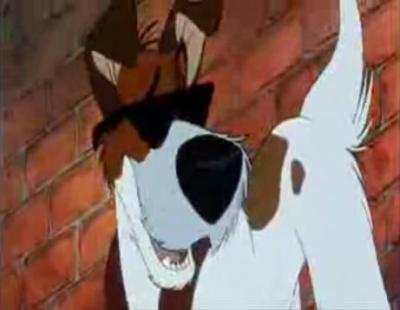 #9 - "Why Should I Worry?" (Oliver & Company)
"Oliver & Company" is one of the few Disney movies I know of that has contemporary music rather than classical music. "Why Should I Worry" is where Dodger sings about how he lives his life in New York City while other dogs join in with him. This was the movie's most popular song, and heck, you can't go wrong with Billy Joel! 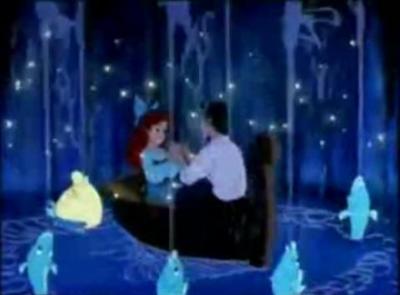 #8 - "Kiss the Girl" (The Little Mermaid)
"The Little Mermaid" had two really big musical extravaganzas: "Under the Sea" and "Kiss the Girl". "Under the Sea" may have been the more popular of the two songs, but if you know me, I often like to root for the underdog. I really love the percussion in this song, and that's why I picked it. The big scene where Ariel and Eric are about to kiss each other is such a big moment. It's a shame that it was...close, but no cigar. 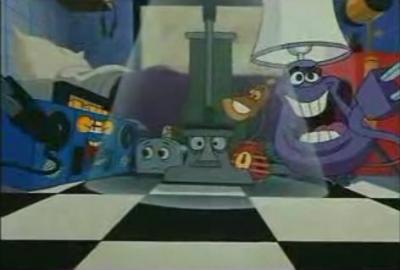 #7 - "Cutting Edge" (The Brave Little Toaster)
"The Brave Little Toaster" may have been one of the weirdest movies I've ever seen, but I absolutely loved the songs in this movie; they are awesome! The song performed by the appliances from the cutting edge of technology would have to be my favorite song in the movie. Also, it's high-tech 80's music, and with me, you can't go wrong with that kind of music. 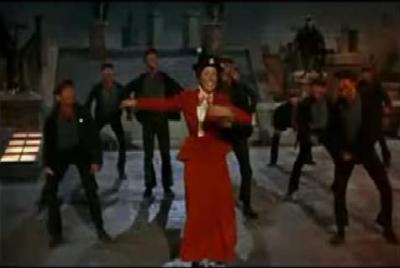 #6 - "Step In Time" (Mary Poppins)
Going back to some classic Disney, here we have what is most likely one of the most incredible musical numbers in the history of Disney films. Near the end of "Mary Poppins", which is undeniably one of the best Disney films of all time, Bert and all his chimeny sweep friends perform a kick ass choreographed dance number on the rooftops of London. Seriously, could you imagine any of this being done in the mid 60's? This must have taken like over 100 takes! On top of that, this segment is eight minutes long! 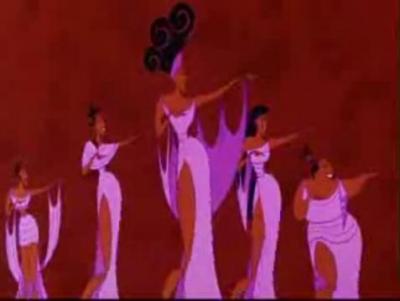 #5 - "Zero to Hero" (Hercules)
Admittingly, "Hercules" is not one of my favorite Disney movies, but a couple of the songs are quite good. This big number performed by the Muses is a good example. I consider this to be the movie's theme song since it's the song that highlights Herc and how he became famous. You gotta admit, it's a cool song. I'd like to see the Kids of the Kingdom pull this off! 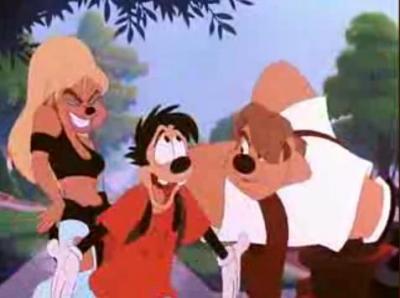 #4 - "After Today" (A Goofy Movie)
What a way to open up this movie! The movie's opening song where Max and his schoolmates all sing about their feelings toward it being the last day of school definately sets the mood for the film. This movie isn't just a Disney movie, it's a musical disguised as a teen flik disguised as a comedy disguised as a Disney movie! This is another one of those movie songs that'll make you feel like you're watching a Broadway play. If you thought "High School Musical" was primitive, then look again. 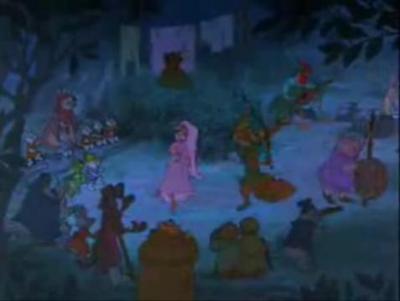 #3 - "The Phony King of England" (Robin Hood)
When I was little, I used to always get up and dance to this song whenever it came on, and I think I still do. It's the part of the movie where the villagers of Nottingham rant about Prince John and all the no good he's doing, and they do it in the style of a happy-go-lucky song. This immediately follows the movie's love song (What a mood killer!), which follows a very intense scene in the movie. Overall, I'm disappointed this song didn't become a big Disney hit, because I think it deserved to. Also, when you watch this segment, pay close attention to the movements, because they look very familiar. 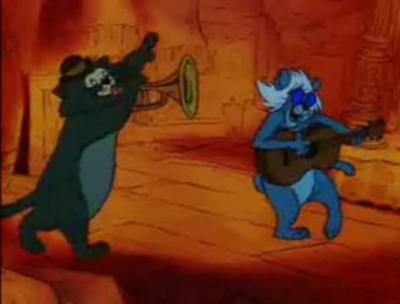 #2 - "Everybody Wants to Be a Cat" (The Aristocats)
Now, this is what I call a musical extravaganza. This song in "The Aristocats" is basically where Scat Cat and his gang sing to Duchess and her kittens about the joys of being a cat. It starts out as a smooth jazz song, then it explodes into a rocking jazz song, then it transforms into a beautiful soft song, and then it finally becomes total chaos! I really loved how the neon lighting all took affect; I think this may have been the start of Disco (half sarcasm). If you haven't seen "The Aristocats", then I reccomend you do; it's a movie worth checking out...especially for this segment! 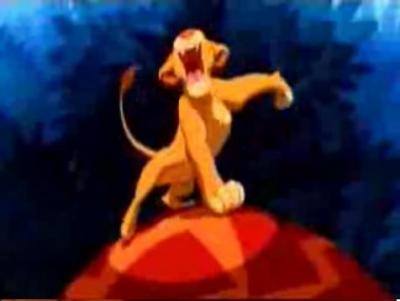 #1 - "I Just Can't Wait to Be King" (The Lion King)
My pick for the #1 biggest Disney musical extravaganza is kind of an obvious choice, but I think it's really hard to resist putting anything from "The Lion King" at #1. All of the songs in this movie are incredible, but the song where Simba sings about how he can't wait to be king is the song I find is the most appropriate one to be put on the list. If I could, I would have put all of my selections at #1, but because of how much this movie made me go "Wow", I gotta say that this one belongs on the #1 spot.

To all you hardcore Disney fans, I'm sure most of you probably love every single one of these musical numbers, as I do. Can't you tell I'm a hardcore Disney fan? I was thinking of including YouTube links to these segments, but then I thought, "Nah, that'll be pointless"; besides, they are gonna get deleted eventually. I do encourage you to check YouTube, however, and check out each of these segments if you're interested. As for the rest of you, I look forward to hearing your thoughts.
20
Login To Vote!
More Articles From dalmatianlover 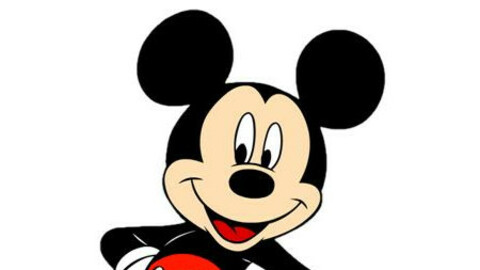