In a movement against the digestion of historical works of art, Sesame Street brings you this film.
By Mystie
On 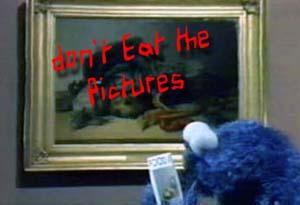 Sesame Street isn't always just numbers and colors. In their specials you learned the essentials of the essential like. DON'T EAT THE PICTURES! Oh sure, it seems simple enough, but I assure you, it happens. So for your sake, for my sake, for the safety of the children, please don't eat the pictures on this site. It won't be good for digestion.

The story starts out simple enough. The gang from Sesame Street is taking some kids to the Metropolitan museum for the day. They all giggle and laugh and point at the impressionist pictures. Bert gets his jollies staring at a cement pigeon and then whisks Ernie away to a closed off display for some hot homuppet sex. Or so one would assume. Before long the museum closes, but where is Big Bird? He's gone off to look for his imaginary friend, Mr. Snuffalupagus! I guess we should all look at him. Oh no! We're locked in! We'll have to spend the night. 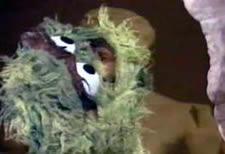 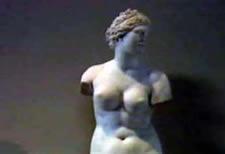 "Bit cold up there?"
Oscar found the room meant just for him -- the broken statue room. It just so happens a majority of these statues are also completely nekkid. Unless Oscar enjoyed this one so much he ripper her apart! Nothing warms ya up like some hot, trashy sex. Har har har! 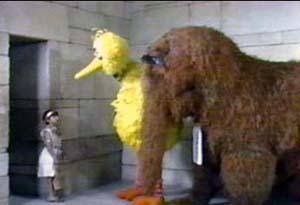 Meanwhile, Big Bird finally finds Snuffy AND a new "imaginary" friend. He's an Egyptian Prince named Taho who has spent thousands of years under a terrible curse. His cat is invisible and he can't join his mother and father in the sky until he answers the riddle "Where does today meet yesterday?" Although Snuffy does try to help, saying answers like, "At the Teddy Bear Picnic" aren't really helping very much. But then again, perhaps his brain is also imaginary. 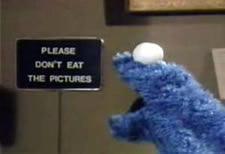 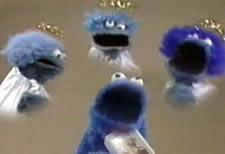 AND THE SINGING INSUES!!! Made for TV kids specials always have the greatest songs imaginable. Cookie monster is accompanied by three Cookie Angels in the chorus of "Don't Eat the Pictures." Instead of eating the almond eyes of the statues and tasting the delicately aged flavors of the mummies, Cookie Monster settles for the museum brochure instead. 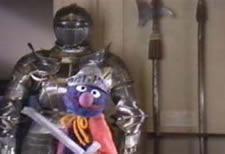 AND YET MORE SINGING ENSUES!!!! In Grover's search for Big Bird, he asks the local suit of armor if he has seen his tall yellow friend. Having no response, he assumes the suit to be shy and transforms into SUPERGROVER to make him less apprehensive. And if that weren't enough, he strikes a few melodies about how much he wants to befriend him and go... yes.... bowling. Mad crazy medieval bowling. 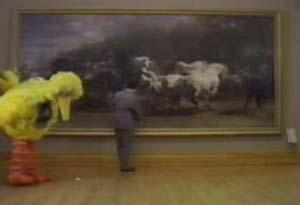 I hope they fired the watchman for this one. 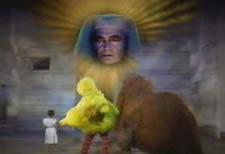 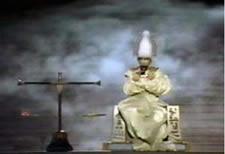 Eventually Prince solves the riddle. "Where does today meet yesterday?" And finally he responds "In a museum!" Now comes the hard part, Osiris must weigh his heart with a feather. But being the lord of the underworld doesn't allow much time for plucking feathers, and Prince can not take the test for no feather appears. Thank the stars for Big Bird, who offers one of his own. The weighing begins and Prince actually FAILS!!! But when Big Bird offers to let him live with him on Sesame Street, his heart finally lifts and he can go to be a star with his parents and his now visible cat. 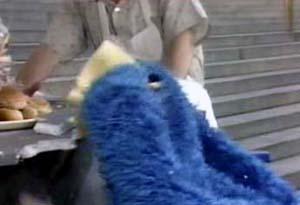 Then cookies monster eats and entire hot dog stand. Uhm yum yum yum yum!!!! So what did our friends from Sesame Street think of this little adventure? 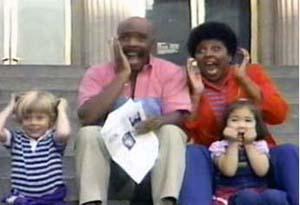 5
Mystie
Get in Shape Girl
Get in Shape Girl is back for another 10 laps around the back yard.
5
Mystie
Bugs Bunny's Thanksgiving Diet
I'd like to give Thanks to this bountiful clip show that the WB has bestowed upon us.

8
Quote O' Matic
youngest girl: "hold on to your hats cause here they are. The fantastic Delights! -youngest girl"
Added By: System
Rags to Riches
Related Articles 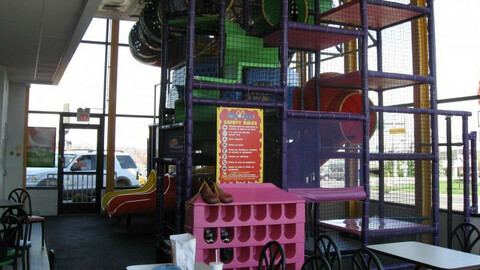 33
90skid555
Favorite Places of my Youth
My favorite places to go as a kid.