Everyone's mad for Madballs!
By System
On As children we all had one. A certain toy that we absolutely had to have. One we wanted to get our hands on so bad that would be willing to promise the moon to our parents in exchange for it. Whether it be a months worth of chores, two weeks of yard duty, or perhaps even a simple vow to lay off beating up on our younger brother, no cost was to high to pay for that toy!

For me that I wanted a Madball so bad I could taste it.

For those of you unfamiliar with them, Madballs were produced in 1985 by a subsidary of the American Greeting Corporation known as AmToy. Madballs were an attempt by AmToy to capitilize on the gross-out boom that was created in the wake of the Garbage Pail Kids trading cards craze. They were simple rubber bouncing balls that were designed to resemble scary, grotesque and sometimes humurous looking heads.

Each individual Madball design had a unique character backstory and name. The most iconic of the Madballs were arguably Screaming Meenie, a baseball looking Madball with an angry face, and the giant eyeball Oculus Orbus. 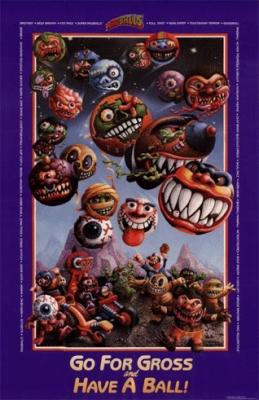 AmToy procuded only two waves of the original Madballs, with each wave containing eight unique designs.

Wave 1 consisted of Screamin Meemie, a baseball with a screaming face; Slobulus, a monster with a hanging eyeball; Aargh, a blue monster with Frankenstein like stitching across his head; Hornhead, a purple cyclops with a nose ring and horn; Dustbrain, a mummy; Oculus Orbus, an eyeball complete with veins; Skull Face, a giant evil looking skull; Crack Head; a head with the brain partially visible.

(According to Wikipedia Crack Head was later renamed to Bash Brain "...due to the unpleasant connotations of 'crack head'.")

Wave 2 consisted of Snake Bait, a head getting crushed in a snake's coil; Freaky Fullback, a pale looking football player; Splitting Headache, a grotesque face with half the skin peeled away; Bruise Brother, a biker looking madball; Wolf Breath, a werewolf; Fist Face, a hand clinching an eyeball; Swine Sucker, a mean looking pig with tusks; Lock Lips, a green face with a padlock on his lips.

Although there were only two waves of the original Madballs produced, a whole slew of spin-off items trickled onto store shelves over the following years.

My memory is a little hazy, but I remember playing with a Touchdown Terror (the football) my friend owned. It worked fine to throw, but trying to catch it could be quite a painful experience thanks to a plastic tip on the nose.

Sadly the Super Madballs failed to catch on, and years after they were produced you could still find the one in the discount bin at the odd store. 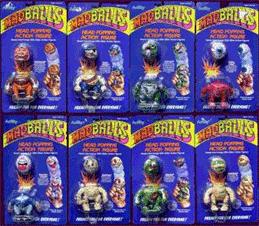 In late 1986 AmToy produced a line of 4-inch figures known as Head-Popping Madballs. The toys had a spring-loaded trigger on the back of each figure that you could pull down to 'launch' the Madball head off of the body. A single wave of eight individual Head-Popping Madballs was produced -- Screamin Meemie, Oculus Orbus, Slobulus, Skull Face, Bruise Brother, Wolf Breath, Dust Brain and Lock Lips. What line of action figures would be complete though without at least one accessory? A Mad Rollercycle complete with Horn Head figure was also produced.

I had the entire line of Head-Popping Madballs sans Mad Rollercycle. What I recall most about these things was the force in which the heads were launched off the bodies. Man, these things could really hurt! I remember screwing around once, acting dumb, and shooting myself in the eye on accident. It felt as though one of my older brothers had walked in the room and just straight up hauled off and punched me in the eye. Madballs eventually received their own cartoon series in the fall of 1987. The plot centered around a group of Madballs that flee their home planet of Orb for Earth after the Badballs, and their ruthless leader Commander Wolf Breath, outlaw rock music. The Madballs meet up with a man-dork from Earth named Skip, who politely agrees to manage the Madball band and....you know the rest.

I honestly could not do justice to how bad this series actually was. I have heard it called the worst Saturday morning cartoon show ever produced quite a few times. If you'd like to read more on how bad this show was, I'd suggest taking a look at Jason43's Madball: The Series review right here at RetroJunk. You can find it in the article archives.

Tried as I might, I could not track down accurate information on how many of these episodes of the series were produced, and out of those how many actually made it to air, but I think it would be safe to say the show only aired for one season - if that.

Under the Star Comic imprint, Marvel Comics printed a total of ten Madballs comic books. The first three issues were part of a mini-series, with a monthly release schedule starting at issue #4. Alas, the comic went the way of the Madball cartoon series, and was cancelled after issue #10. 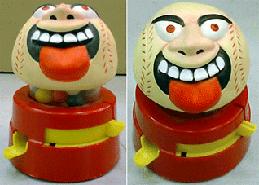 It's truly amazing that such a diverse line of products were made, and continued to be made for several years, for a toy with a shelf-life of only a few months. Over time we have been graced with Madball pencil toppers, coffee mugs, piggy banks and silly string guns to name just a few. And it doesn't stop there...

Earlier this year toy company Art Asylum in had come to an agreement with American Greeting Corp. to revive the Madballs. The first wave of 6 Madballs includes Bash Brain, Dust Brain, Horn Head, Skull Face, Slobulus and Repvile (an entirely new Madball design). The figures are tentatively scheduled for release December 2006, with a suggested retail price ranging from $4.99 - $5.99 per. I never did get my Madball. I ended up with several of the spin-off products and the entire line of Head-Poppers, but never did get my little hands on that Oculus Orbus I wanted so desperately. Oh well, maybe with this retro line I'll finally get another crack at one.
7
Login To Vote!
More Articles From System

I had a Screaming Meemie, and I remember renting a video of he animated series when I was about 10. There were 3 episodes on the video. The cartoon was never on TV in Australia though...Thank God!

There were a lot of imitation Madball's too. You are right, cranium_bear. The imitation ones I got when I was about 10 came from slot machines...But that was before 1990.

I had a lot of the crappy pencil topper ones too...I'm pretty sure one of them was Aargh...except he was purple, not blue.

Only problem with the toppers was that they were so heavy that it made the pencil completely unbalanced and impossible to write with. Stupid idea^^;


Are you sure you want to delete this comment?
Great article! When I look at that artwork it brings back memories...

I had a Screaming Meemie, and I remember renting a video of he animated series when I was about 10. There were 3 episodes on the video. The cartoon was never on TV in Australia though...Thank God!

There were a lot of imitation Madball's too. You are right, cranium_bear. The imitation ones I got when I was about 10 came from slot machines...But that was before 1990.

I had a lot of the crappy pencil topper ones too...I'm pretty sure one of them was Aargh...except he was purple, not blue.

Only problem with the toppers was that they were so heavy that it made the pencil completely unbalanced and impossible to write with. Stupid idea^^;