My personal 10 weirdest toys I had as a child.
By Grumble
On
We have fond memories of certain toys that we as kids use to play with. Some of us had Teenage Mutant Ninja Turtle action figures or Transformers, but what about some of the weirder toys out there? I will say there were some odd toys back in the 80s and 90s, so I thought I would highlight some weird toys that I use to enjoy! This is my personal top ten oddest toys! 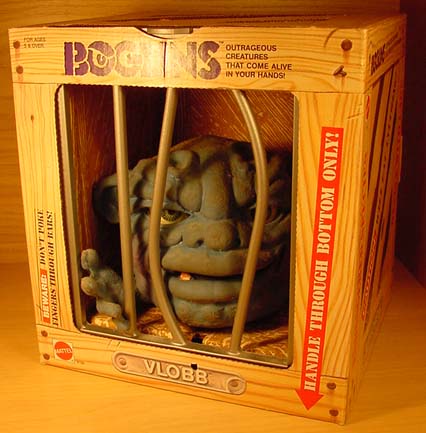 What boy doesn't want a "pet" that will kiss their aunts, eat yucky vegetables, and harass their sister? Boglins were puppet monsters distributed by Mattel in the late 1980s and appeared to be cashing in on the small monster craze, which was sparked by Gremlins and Ghoulies. These puppets had movable eyes that would glow in the dark and a box that acts as its cage. This toy was strange, but it was one of my favorite bizarre toys! 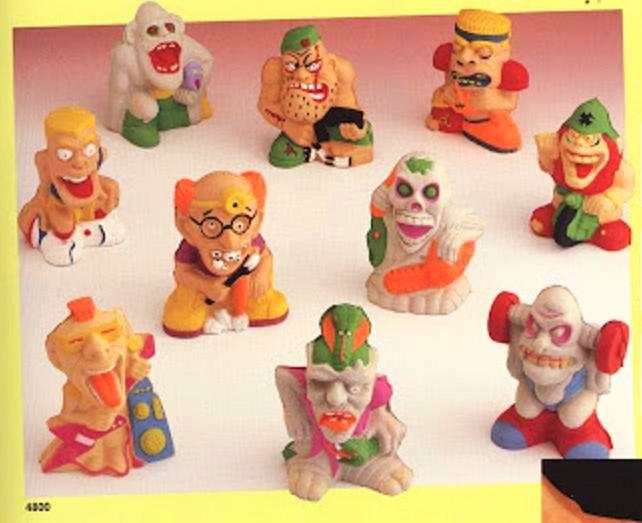 The toy that you can squash, press, etc. and they keep coming back for more! This toy was made in 1987 by Coleco. Even though this was a fairly simple toy, it was still fun for boys to crush something that wouldn't break! They had some odd characters from a crazed heavy metal rocker to a mad scientist! These to me were a blast and always have a spot in my heart! 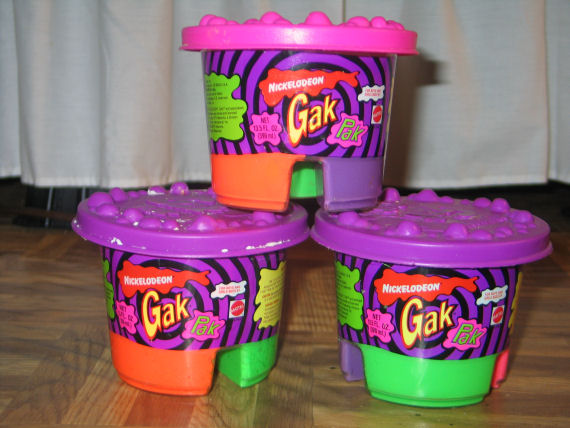 What can be said about Gak? It was just basically a blob of green, blue, etc. goo, but us kids loved them! A "toy" that was manufactured by Mattel in 1992 due to the popularity of Nickelodeon's slime. You can make fart noises and stretch it.....that was about it. If you had the Gak Vac and Gak Copier, you had tons of more fun right there! I remember asking my father for one and the look of confusion was priceless! I know Gak has made a comeback, but it was always a 90s thing. 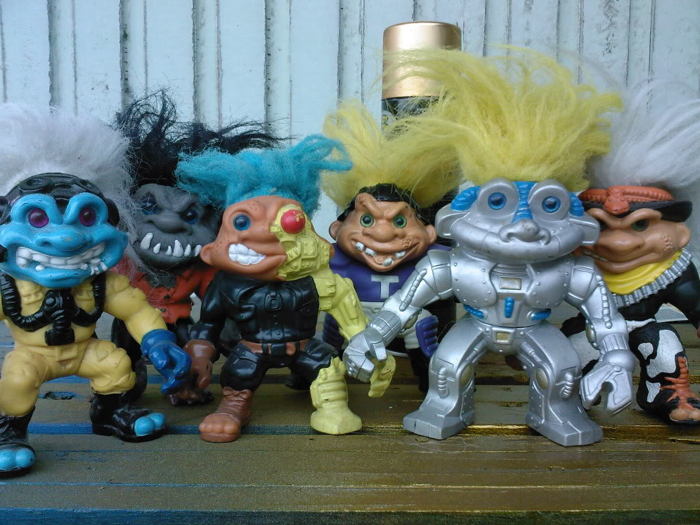 The girls had their cute little trolls, so the boys had their own version! These trolls on steroids were made by Hasbro around either 92-93. Battle Trolls were like the most bad-ass (cute) toy for boys! They had spoofs of Dracula, Terminator, Superman, etc. and these were awesome! These toys did not make you feel less than a man even though they have colorful hair and base on a girls toy. 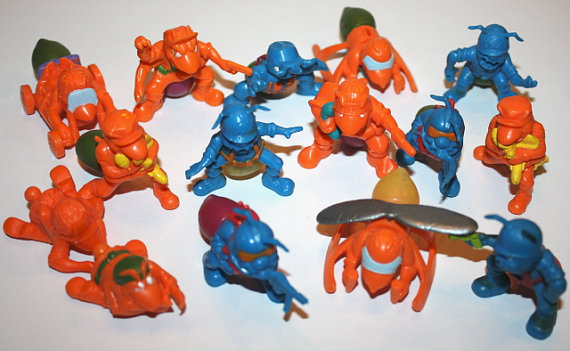 Almost every child had the green army men and play fictitious wars on their living room floor. How did Hasbro decide to spruce up the idea? By making them ants with guns! These ants were broken down into two factions: the Blue Army (commanded by General Mc-Anther) and the Orange Army (ordered by General Patant). It was always fun doing battle with my older brother to see who side was more supreme!
5. Pillow People 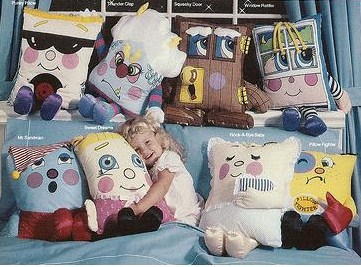 Did you ever want to play with your pillows? No? Well in 1986 someone decided that pillows should become people. These are technically not toys, but I feel these should be thrown in because I did enjoy them as a kid. So not only can you sleep on these you can have fun! You can watch TV with them, go for a walk, and whatever else you like! I use to own Mr. Thunderclap and we use to have a blast together! I get the sense that pillow pets may have been inspired by these guys. 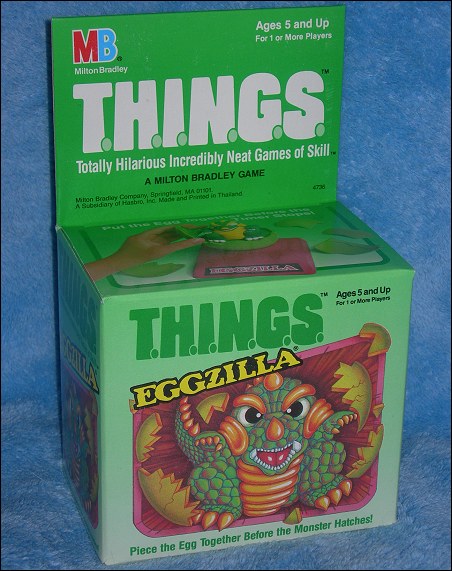 One of the most fun and oddest games of skill I ever came across, ladies and gentleman....T.H.I.N.G.S. Produced by Milton Bradley in 1986, T.H.I.N.G.S. (“Totally Hilarious Incredibly Neat Games of Skill”) were able to cash in on the odd toys being released around the 80s. There were many different type of T.H.I.N.G.S. released with colorful box art that grab our attention! These games were mostly timed/motorized games such as Eggzilla, in which you must rebuild the dino's egg before it explodes, and Sir Rings Alot, a knight who collects rings, to name a few. These games of skills were always a blast and always kept me busy 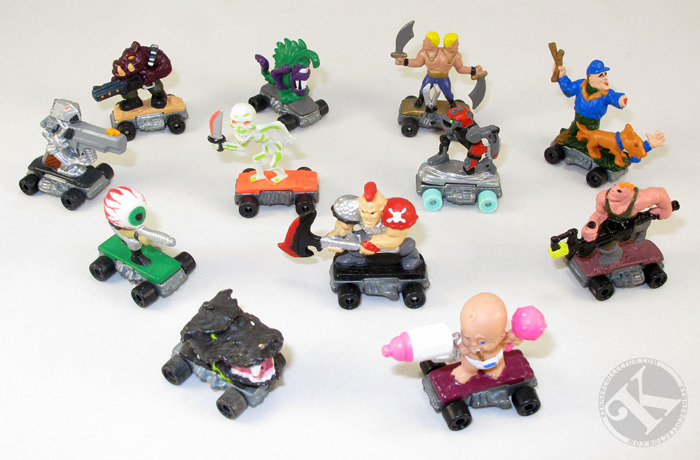 These to me were one of the coolest, and weirdest, toy lines in the early 90s! The toy line that cause several complaints by parents was Savage Mondo Blitzers! In 1991, Kenner released these 1.5 skateboarder figures and I thought they were insane, but in a fun way. There were 40 Blitzers in all and were in ten separate 4 packs, each pack representing a different gang. They had unique gang names like Concrete Breakfast Gang and The Butt Kickers. Each individual character was even more interesting like Cleat Meat the football player to Roach Kill the giant cockroach. I wish they could of had a second series, but sadly they never got any bigger than the first. 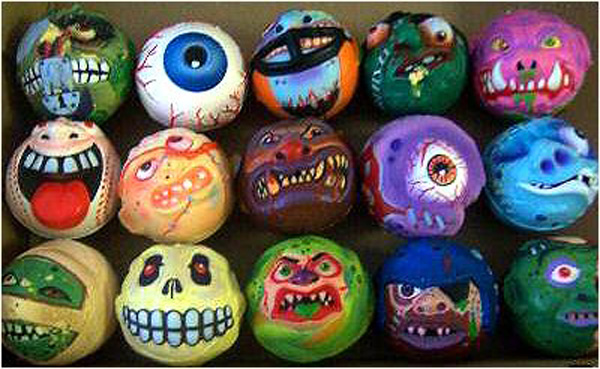 This to me was one of the most popular toy lines in the 1980s. In 1987, AmToy appeared to jump on the gross out bandwagon like Wacky Packages and Garbage Pail Kids. These toys were basically tennis size rubber balls with the most grotesque faces that us boys had to get them! Madballs included characters like Screamin Meemie, the baseball with a large tongue, and Slobulus, a monster with his eye hanging out, were some of the gross characters created. The success also spawned Super Madballs and Head Popping Madballs, but the original will always go down as one of the most infamous toy lines as a kid. 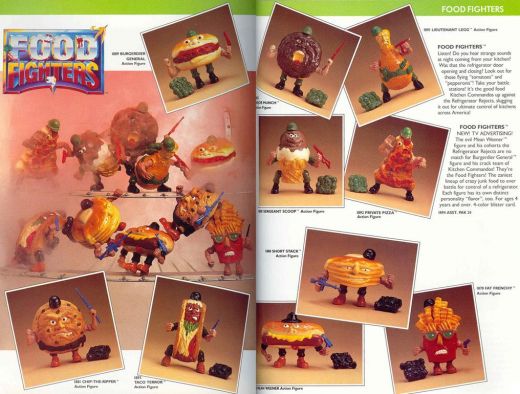 This to me was my all time favorite weird toy line ever as a kid! We kids loved playing with our food, so Mattel decided to really let us play with our food! This toy was released in 1988, and these were literally walking food in military gear. The characters were divided into two armies: Kitchen Commandos (the good guys led by Burgerdier General, a cheeseburger) and Refrigerator Rejects (the bad guys led by Mean Weener, a hot dog). They also had characters based on doughnuts and tacos as well! Not only figures, they had vehicles as well, such as The Fry Chopper and The BBQ Bomber! I had the whole line and use to play with them for hours. I truly miss these figures and always bring back great memories when I see them.


This was my personal list of weird toys that I loved as a kid. I am sure I left out a few, but again these were by personal favorite ten. I am sure you guys remember some of these and had fun, but I bet you recall others. If you remember any other odd toys you use to love, then by all means share! I hope you enjoyed reading this as I did writing this.
33
Login To Vote!
More Articles From Grumble 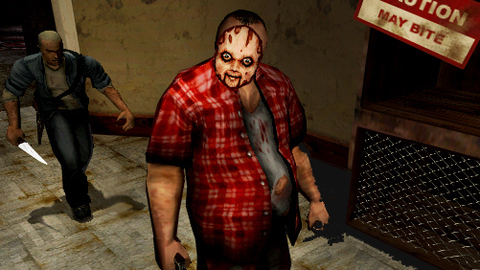 11
Grumble
Manhunt: Most Disturbing Video Game Ever?
A look into the controversial Rockstar title.

26
Quote O' Matic
Lewis Rothschild: "You have a deeper love of this country than any man I've ever known. And I want to know what it says to you that in the past seven weeks, 59% of Americans have begun to question your patriotism. -Lewis Rothschild"
The American President