CC: A Wish For Wings That Work 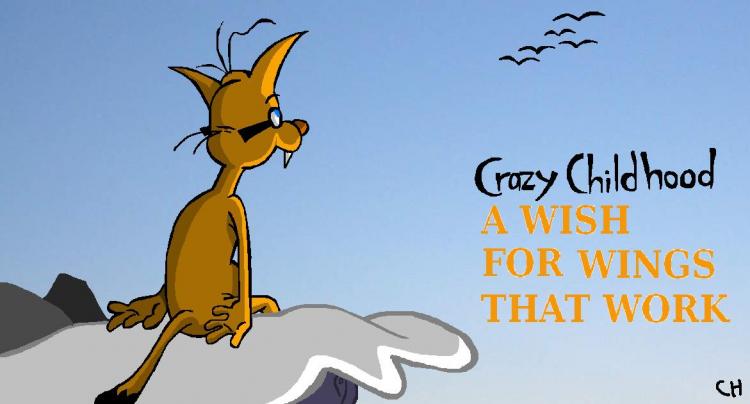 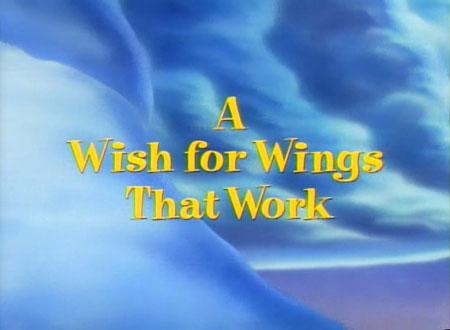 Winner of the Forgettable Book Of The Year award!

Comic strips like Garfield and The Far Side have always been favorites of mine. They don't go too much into social commentary or politics, which makes fun to read for both kids and adults. But one comic strip that has been sorta growing onto me was the Opus series created by Berkley Breathed. 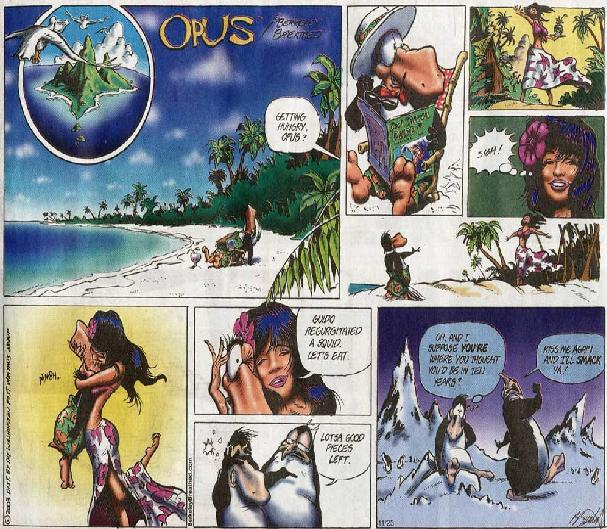 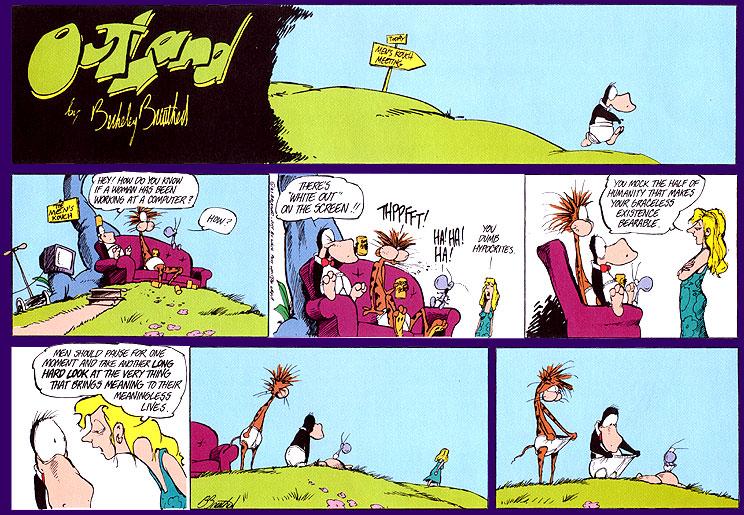 Starring in 3 seperate comic strips spanning throughout the 80's to the 00's, the penguin Opus and his wacky sidekick Bill The Cat have been familiar to me since I was little, but the comics never struck me until years later, seeing how while the characters were likable in their own way, the comics were more along the lines of a political cartoon with a running storyline, parodying such subjects like pop culture, politics, and the list goes on and on.

Though I still love the simplicity and often-surrealness of Garfield and The Far Side, the Opus series is starting to become a close favorite, though it will never replace what I've grown up with since my childhood. When the second comic Outland came out, Breathed experimented with children's books and created one featuring his cast of weirdos. The result was A Wish for Wings That Work, the story of how our favorite comic penguin wished to fly. 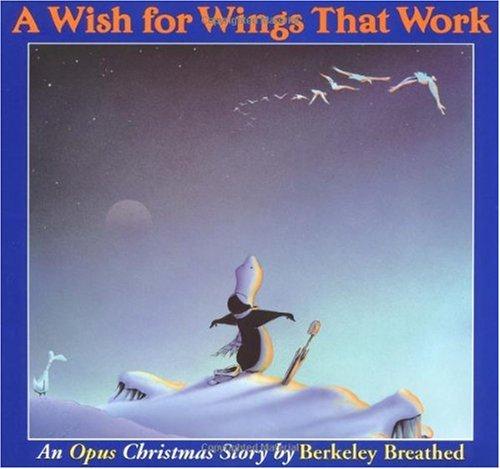 Have I read it? No. However, I have seen the TV special that aired just months after the book's release. Despite mediocre ratings and, surprisingly, the disapproval of Breathed, it still managed to get itself a small audience over the years, which I am a part of. I don't care what Breathed or anyone say about this special: it's probably the best "penguin-trying-to-fly" cartoon of all time, unlike SOME others (I'm looking at you, Pebble & The Penguin). 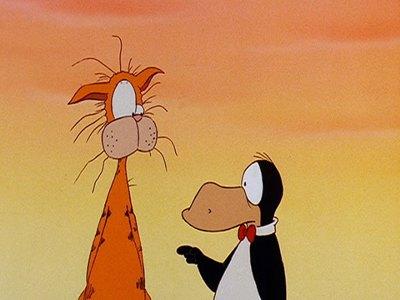 "Ummmm...don't look now, but the mediocre ratings are right on our tail."

Opus the Penguin (Bell) struggles to achieve his seemingly impossible dream to be able to fly. His last resort is writing a letter to Santa (Welker), wishing for the ability to fly. Opus soon realizes that maybe his wings are good for something after all.... 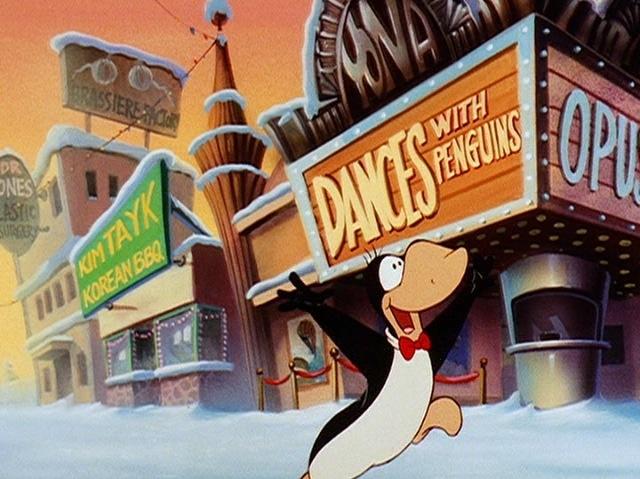 Dances With Penguins: Kevin Costner's biggest bomb since The Postdog.

The animation values are pretty good here, for televison at least. It's no surprise, considering that the company who made this were the same ones who created such classic shows like Tiny Toons and Animaniacs. I especially like the backgrounds, which capture the essence of watercolour paintings that you would usually see in children's books.

A lot of people say that the one thing that they hate about this special is Opus' voice, provided by Michael Bell (Chuckie's dad from Rugrats). I'm not exactly sure why. I think Bell does the character well. He really brings out the true dweeb in Opus. But maybe that's because I haven't read the comics as a kid, and fans who do read them probably have a good idea who the voice should be. But in my opinion, the voice isn't bad. 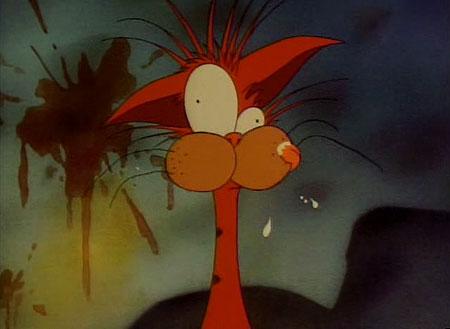 
It's been said by Breathed that he wanted Sterling Holloway (Winnie The Pooh) to do the voice of Opus. Considering that we only know of Holloway as the voice of the bear with very little brain and Kaa from The Jungle Book, it's kinda hard to see him do a penguin with more of a bolder voice than the soft-voiced bear and snake. 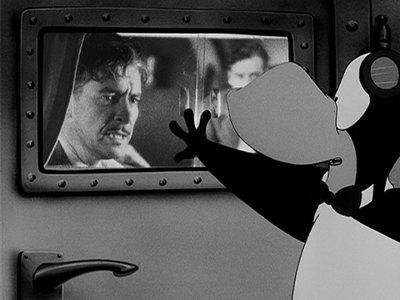 "Pay no attention to the penguin in the cockpit!"


There are two hilarious scenes in the special that stand out: one is a dream sequence where Opus dreams himself in the 1937 film Lost Horizon. It's funny because it fits in with the story and motivation of the main character so well. Sure, it doesn't really move the story forward, but it sure is fun filler. The other is a quick one where we hear Robin Williams as a pissed-off kiwi who's angry at her wife for running off with an... ALBATROSS!!!!! 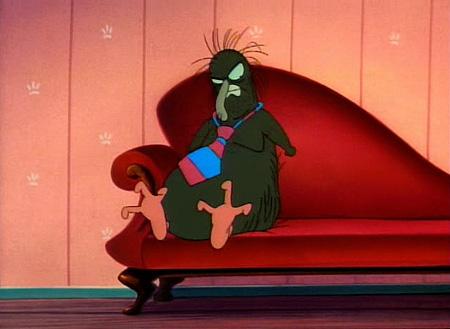 Nothing much, really, aside from the fact that Berkely himself dislikes this special? This has always puzzled me, seeing how he was not only the writer of the special, but executive producer, which means that everything must go his way. How could this special could've possibly gone wrong?

Our first clue of Breathed's inner hatred for the special was in this Washington Post interview from a few years back:

QUESTION:I need a copy of "A Wish for Wings That Work" either VHS or DVD. Where can it be found?

Berkeley Breathed: Hopefully in the rubbish pail. We can do better than that and we will with an eventual Opus film.. but I'm glad you enjoyed it. I presume your family was on speed when they watched it. I would imagine it helps. 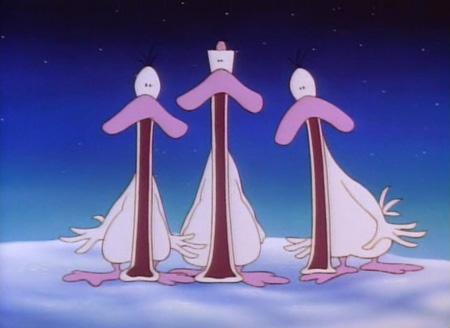 
That's...pretty harsh. That may show his disdain for the special, but was there ever a reason why? It just so happens that I actually found what I needed not too long ago. Here's his response from an online interview that clears up everything:

What was the development process for A Wish for Wings That Work as an animated special? I remember it airing one year, then disappearing quickly. Even the VHS of Wings is out of print. I'm actually quite a fan of the special, but I know you weren't terribly happy with the outcome. What happened, exactly?

BREATHED: Unspectacular ratings. Simple as that. My humor wasn't meant for network television, even when the show is done right, which that one was not.

What was the development process like for the special? What, in your view, were the stumbling blocks towards it falling short of what you wanted it to be?

BREATHED: In my case, lack of writing experience, as I wrote the script. And the director was way over his head. 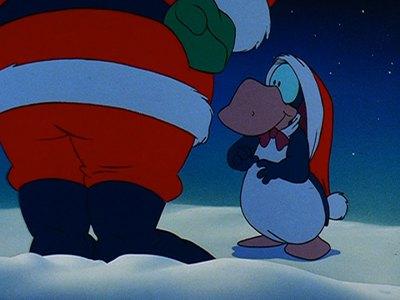 Looking at Santa's area really gives everyone a tingly feeling inside! 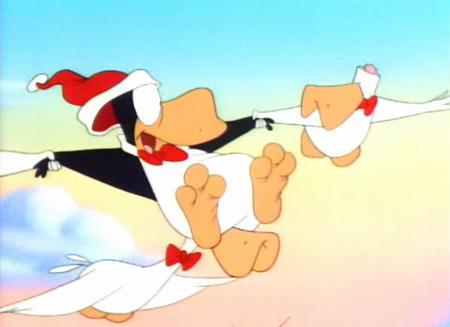 "Hey! What happened to the top of your head? Did Jason Voorhees slice it in half or something?"

It may not be the greatest Christmas special, but it's entertaining enough. It doesn't matter if it doesn't have the right voice for Opus, or if Breathed hates it with all his heart, it's a well-animated, sentimental piece that teaches the lesson of being yourself. But let me assure you, it's no A Garfield Christmas.

4
Quote O' Matic
Officer Red Riding Hood: "Why Jackman, What big teeth you have."
Jackman Wolf: "Well, You know it. Say, About Little Jerry and the Monotones, They were supposed to be on my show. Do you know where they are?"
Officer Red Riding Hood: "Nope. But I like to take two requests, "Cooperation" by The Cobble Stones, And "Hand Talk.""
Jackman Wolf: "Baby, You say it. And we play it. (Chuckles as he starts The Cooble Stones "(I Can't Get No) Cooperation" music video)"
Added By: BuddyBoy600alt
Sesame Street