C.C. : Happily Ever After

The final Filmation project and let's hope it stays that way.
By Nails105
On 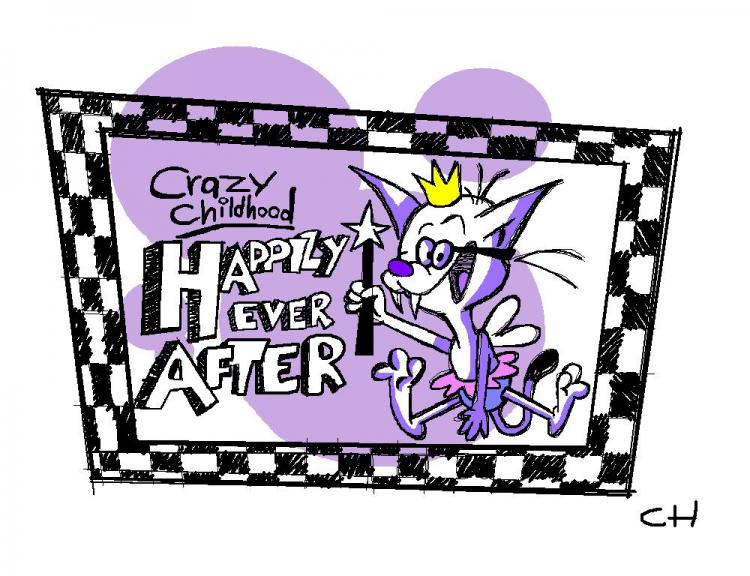 For more pictures by yours truly, check out Cartoonlover16's accoount on Deviantart.com. 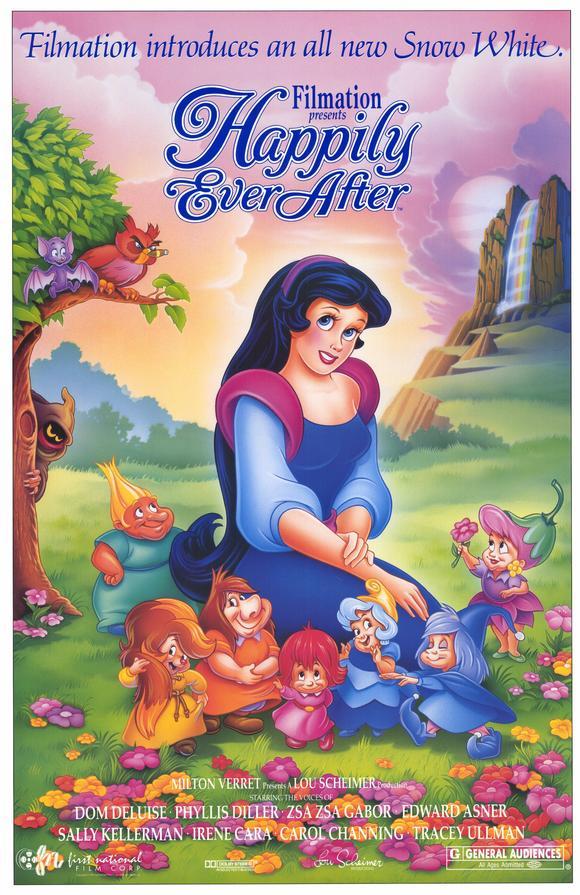 As a 90's kid, I grew up with cartoons that really captured the true essence of what cartoons were supposed to be - chaotic, free-flowing, and of cousrse, hilarious. Even after that glorious decade, cartoons continue to follow the same formula and even try to take it to the next level. Whether you care for the cartoons for today or you don't we can all agree that it's all better than the animated atrocities of....Filmation. 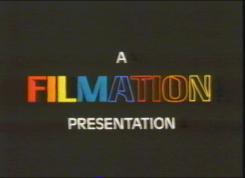 
I can't STAND the lifeless crap from the now-defunct studio Filmation. There are some OK moments in the animation here and there, but it's mostly choppy, worse than 70's Hanna-Barbera, and it nearly drove all the animators that worked there insane. Sure, it may have spawned the He-Man series, but do you really remember anything from that cartoon aside from the characters? 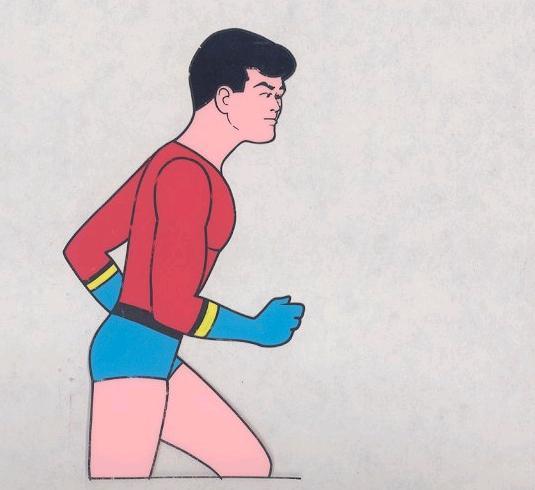 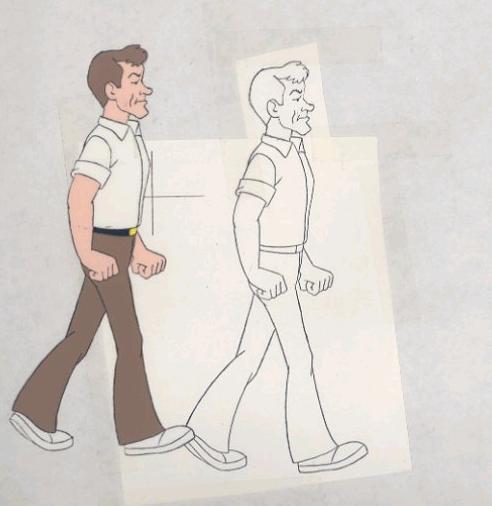 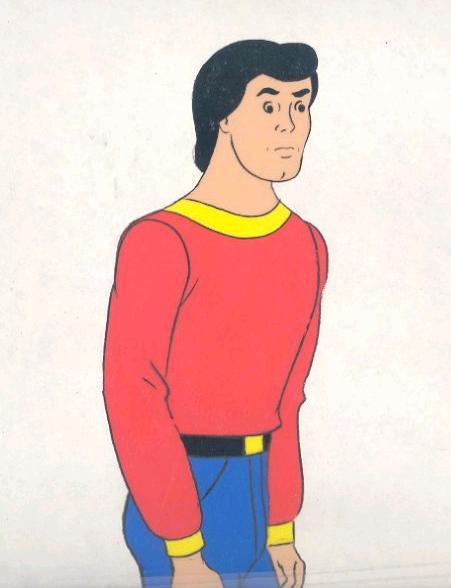 
For some demented reason, the studio's works seemed to have dominated the world of television up until the late 80's, when cartoons started to become what they were truly supposed to be. But before the house of horrors offically bit the dust, they released one last theatrical outing. Yeah, after looking at the previous pics above, you instantly think "Yeah! They should really make a movie!"

Actually, they did make a few films which were supposed to be "unoffical" sequels to better films, like the 1972 film Journey Back To Oz, 1985's Pinocchio and the Emperor of the Night, and 1993's Happily Ever After, which is the subject of my review today. 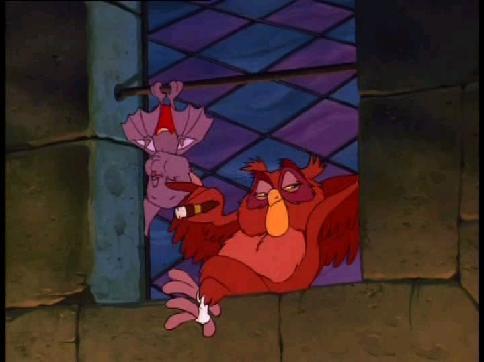 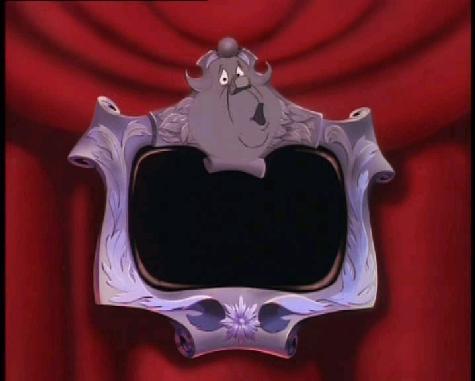 "Well, you're certainly not the fairest of them all." 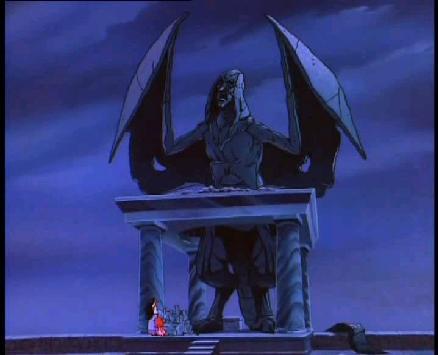 Wow, the newest work of art from Michelangelo really sucks.

In Fairy Tale Land, all is right once again. The Evil Queen is dead and the kingdom celebrates. However, the Queen's brother Lord Maliss (McDowell) hears about his sister's death and plans to avenge her by ruling over the kingdom and destroying the ones responsible for the Queen's demise-- Snow White (Cara) and Prince Charming (Horton).

Maliss manages to kidnap the Prince, but Snow White escapes into the woods, and even bumps into the Dwarfelles, the 7 dwarves' cousins that control all of the elements of the earth (Not too late to back out now, folks). Together, they set out to stop Lord Maliss and his evil magic. 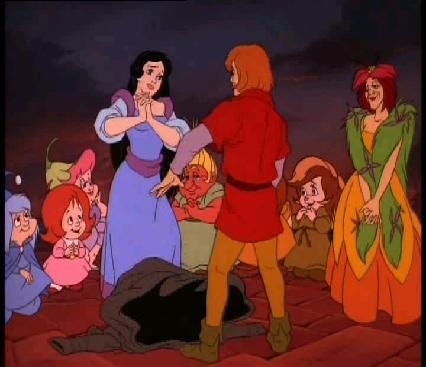 I will admit, the animation is surprisingly better than Filmation's saturday-morning tripe. The characters do more than bob their heads up and down and stand motionless while doing it, but at times, it even looks like something Disney would do. But sometimes, when it tries to look good, it's like someone came in and bashed the animator's head with a baseball bat and knocked out the creativity out of him. So whenever you see some good animation, it then ends with emptiness in the movement of the character. 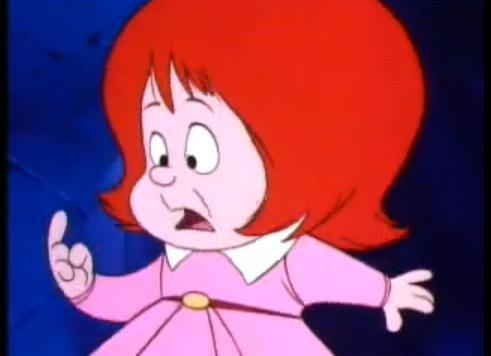 The first one is Thunderella (Ullman), who's supposed to control the powers of thunder and lightning. Are you kidding me? She looks like Strawberry Shortcake if she were drawn by Eric Goldberg! And how can such a tiny and helpless creature possibly control lightning? 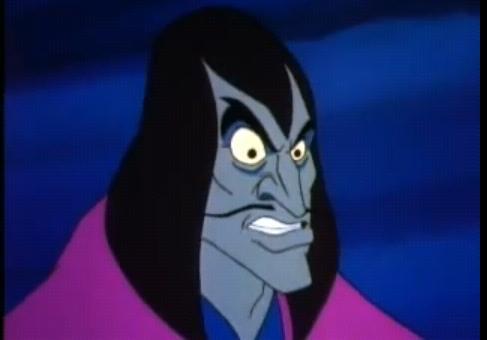 The second character is Lord Maliss, the supposed "brother" of the evil Queen from the first Snow White movie. Like he really looks like he would be related to royalty. He looks more a sleazy huntsman rather than the brother of a friggin' queen. I guess you can say he looks like this so can he be more of an active character instead of the standard villian that just stays in his lair and plots. But you can be active in a movie and dress like royalty, like Merlock from the DuckTales movie. Though to be honest, I guess I would go for the huntsman look instead of wearing a hot and sweaty robe all day.

Like any Disney knock-off, there's the funny sidekick to keep the kid's attention. At least in a Disney movie, the sidekick can be funny and serve to the story as well. Here, we got a red, cigar-chomping owl named Scowl (Asner) and a timid, goody-two-shoes blue bat named Batso (Welker). Though Batso is cute, and some of the jokes they spew are a little funny, they serve no purpose to the story whatsoever. Their subplot is to prove that they can be bad for Maliss, but that quickly fades away into nothingness and is replaced by them simply hiding from Maliss. It's like they want to hide from the whole movie! I wouldn't blame them.

Finally, the songs. There's only 3 (I don't count the pop ballad that plays at the end, because I turned off the movie by the time the end credits started to roll), but they're pretty short and forgettable. You know you're in for a bad movie when the first song is a RAP SONG sung by a OWL about being bad. Yeah, I want my money back. The second song is sung by Thunderella, and call me crazy....but is it me, or does the song sound like I Wanna Know What Love Is by Foreigner? As for the third song, by Mother Nature, there's not much to write home about. They all try to sound modern for their times, but it just comes off now as embarassing and campy. Imagine if a Disney song used rap songs.....shudder... 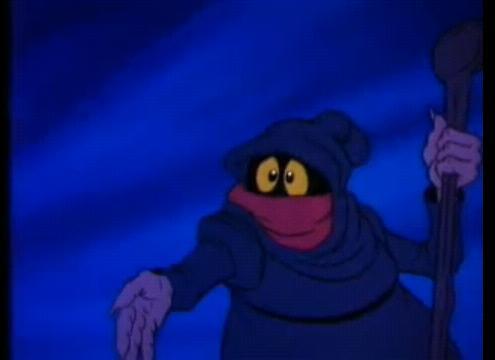 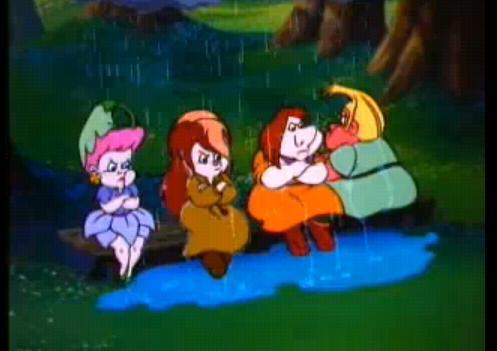 The film's negative reception rains onto our heroes. 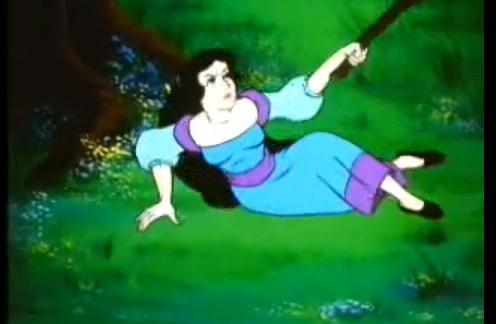 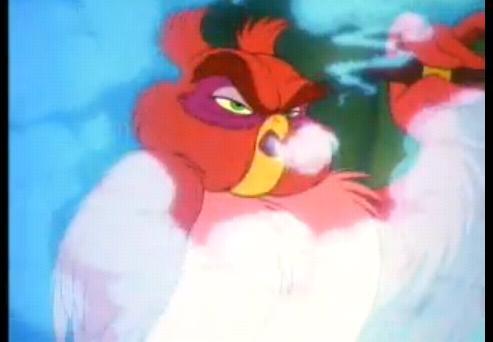 God, even Cyril Sneer would tell you to tone down the smoking!

I will say that by Filmation standards, this isn't the worst thing I've ever seen. The animation is fine, it's short and inoffensive, and the plot is kinda clever for very small children. It's just the uninspired characters, the forgettable songs, and overall blandness that brings the movie down to rainy-day viewings only. If you like it or even express interest in seeing it, that's fine, but with other films like...y'know, Snow White, you can do a whole lot better.