Jon Lovitz's Annoying Man is proof that if you push hard enough to get someone to write for you, it CAN happen.
By Allison_SNLKid
On
One of the most consistent (and my favorite) segment on "Saturday Night Live" is "Weekend Update." You always know when its coming--the musical guest is on stage for their first performance. It's several minutes after midnight. When the show comes back from a station break (usually around twelve-fifteen), the familiar "Weekend Update" music and opening montage begins, drawing you into the world of "current events with a spin." 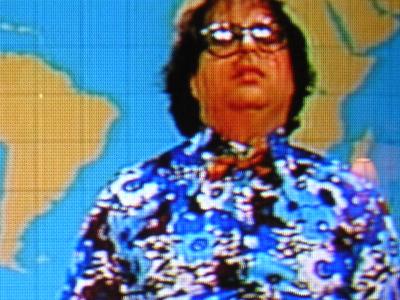 Meet "Annoying Man." Say "hi" to "Annoying Man." But, don't shake his hand. Please. Just don't. Chances are it's either sticky, or he's concealing a joy buzzer. Jon Lovitz plays "Annoying Man," and his premise is simple--annoy the bejsus out of Dennis Miller.

Before I delve into the character of Annoying Man, I shall give you some background on Annoying Man. The character was created by a then-unknown writer named Conan O'Brien, who joined "Saturday Night Live" as a writer in 1988. O'Brien was inspired to write this sketch after Jon Lovitz, a popular cast member since 1985, asked (actually, I think Conan emphasized the word "beg") O'Brien to write a sketch for him.

Writer Conan O'Brien circa 1988. It's hard to tell when this photo was taken, since his hair has always looked like that.

Conan O'Brien on "Annoying Man"
"You know, some people were a... Lovitz would sort of come around sometimes. 'Why don't you write something for me? Come on, write me a sketch.' Hence, "Annoying Man." Now, when you see Conan O'Brien on television, you can think, "Wow. Now I can see the resemblence to anything Conan does." I know I do. 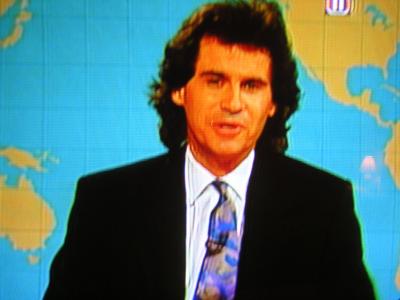 "Annoying Man" served one purpose...and did he ever serve it. In fact, in no less than seven appearances, "Annoying Man" achieved some of the following annoyances:
1. Whining (He would often start off whining, and any time he spoke it would come across as whiny)
2. He would scratch a fork on a chalkboard.
3. He would scrape a knife across a plate.
4. He imitated the Enegizer Bunny.
5. He gave Dennis Miller a "haircut."
6. He made Dennis Miller brownies (which Miller refused), and then ate them...with his mouth wide open while making loud chewing sounds.
7. He chewed tinfoil (much to audiences' horror).

And his worst offense...

Dennis Miller: You're a freak! Get out of here, and take that big zit with you!
Annoying Man: what zit?
Dennis Miller: That zit! The one on your face?
Annoying Man: Oh, this one? (Pops zit on his cheek, which in turn squirts goo; the audience shrieks) 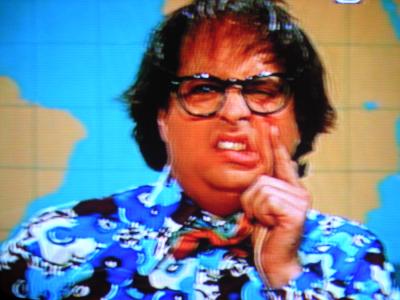 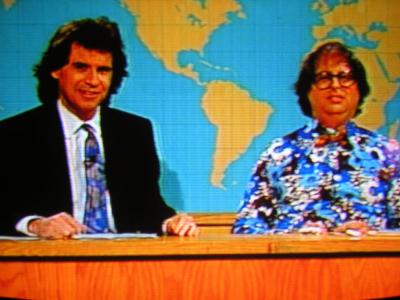 Miller calls him a "freak" everytime, and when he asks why he does all this, Annoying Man's response is... 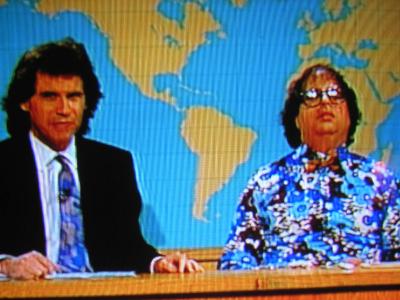 I think the expression says it all, don't you?

Well, there you have it. A tribute to "Saturday Night Live's" most annoying character, literally. and you thought I was going to discuss Ed Grimley. Shame on you. I like Ed Grimley! 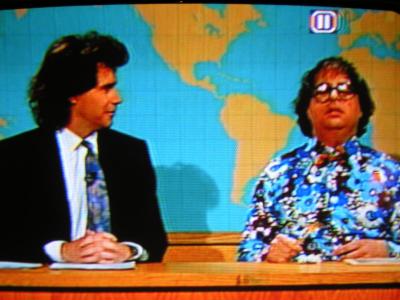 3
Quote O' Matic
Lucas: "There are many strange legends in the Amazon. Even I, Lucas, have heard the legend of a man-fish."
Creature from the Black Lagoon