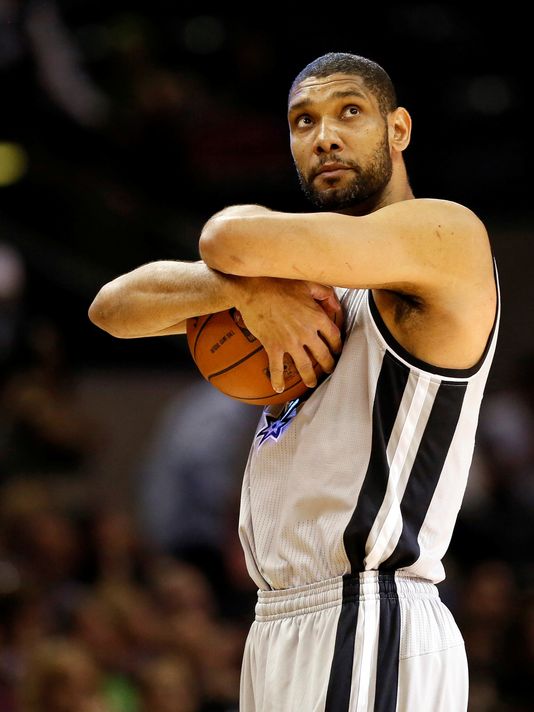 This man is the very definition of greatness. Tim Duncan is the picture of the perfect player. The epitome of respect, Duncan never talks, never shouts, and never complains, he just plays basketball, and plays it beautifully. Duncan roared into the NBA in 1997 already billed as one of the greatest big men to have ever played, so when drafted by the San Antonio Spurs perhaps the most formidable twin towers assembly was formed in Duncan and David Robinson. Duncan served as that perfect partner Robinson so desperately needed to succeed. An excellent rebounder, fine shooter, and stout defender, while all this describe Duncan to a tee, there's another word that defines Duncan's greatness, leader. While Duncan and Robinson would serve as the centerpieces of the first two championship teams for the Spurs, it would be after the Admiral bid farewell and promoted his commodore to full fledged admiral, from there Duncan steered his newly acquired ship to even greater success, leading his crew to two more championships, and just a few days ago, led the destruction of the two time defending champion Miami Heat, earning him is much deserved fifth title that was stolen from him and the Spurs last year. Whether you find him boring, uninteresting, and unemotional, you are not a true basketball fan if you do not believe he is respected, adored, beloved, and more importantly, fundamental. 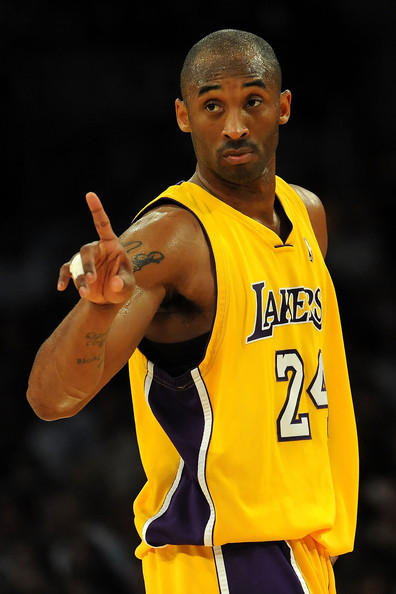 This is a player that truly has venom in his veins. Billed as the next "you know who", Bryant possessed all the qualities of his predecessor, lethal shooting, killer mentality, relentless defense, and most of all, dangerous competitiveness. Bryant was all these and then some, younger, stronger, faster, and scarier. In his first few years in the league, Bryant served as the sidekick to Shaq, to form one of the deadliest NBA duos of all time and created another Laker dynasty, winning a threepeat and welcoming the NBA into the dawn of a new millennium. Labeled as the second greatest shooting guard of all time, Bryant had a falling out with Shaq which led to the big man's departure and leaving the black mamba all alone. Bryant however remained loyal to the iconic purple and gold and stayed put as the dark days arrived. Those days would soon vanish as Bryant would find himself being reunited with Phil Jackson, the greatest NBA Coach of all time and the architect of Bryant's previous threepeat. With his mentor firmly back on the bench, Bryant would put the team on his shoulders and lead them to back to back titles, finally shaking off the mantra of "can't win without Shaq". No matter what you think of Kobe Bean's attitude or actions, there is little to doubt that this man has truly cemented himself into the top ten greatest players of all time lists. 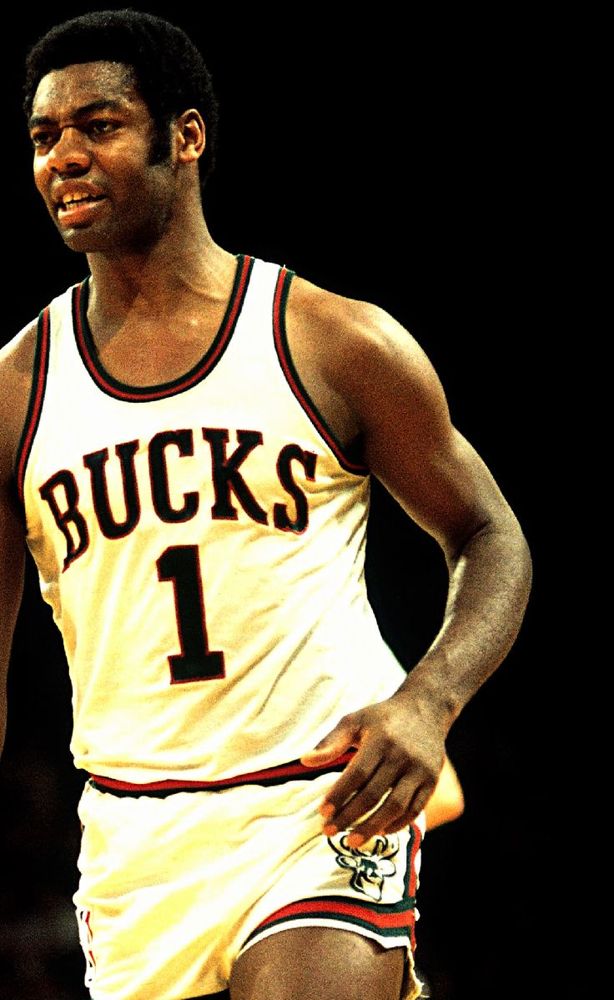 This man is the greatest all around point guard of all time, hell he may even be the best guard of all time. The Big O was an offensive tour de force that tore the entire league apart. In the entire history of the NBA, only one player and one player only has ever averaged a triple double, and this was that one player. Able to score at will, outrebound even the tallest players, and dish out multiple assists with his eyes closed. While defense was a liability to Oscar, he made up for with spectacular offense that ramrodded even the best defenders. Oscar's career wasn't always met with spectacular awe and widespread praise. Throughout his career, Robertson faced disgusting and horrid racism particulary during his high school and college years. Perhaps Robertson's greatest accomplishment however was off the court in the form of the Oscar Robertson Suit, a lawsuit filed by then President of the National Players Association Robertson against the NBA that resulted in the free agency rules we see today, greatly affecting a player's free agency rights. Whether on or off the court, The Big O will always have a significant place in NBA history and his name will always be among the small list of greatest NBA player that has ever lived. 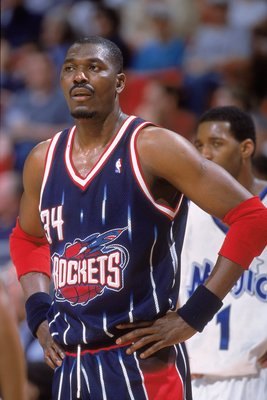 7. Hakeem Olajuwon
Sweet dreams are made of this, and this man was the sweetest dream in NBA history. The argument can be made that Hakeem the Dream is the greatest center that has ever lived. Easily the greatest offensive big man in the history of the game. No big man in the history of the game of basketball possessed the footwork that Hakeem possessed. Credited by the man himself to playing soccer in his youth, Hakeem's footwork was a sight to behold, the man could play the game on ice, he was so good. Hakeem created the greatest offensive move for a center of all time in the form of the Dream Shake, a move that consisted of Hakeem ball faking the defender, causing him to jump in the air, which enabled Hakeem to spin on his heel and drop in a sweet layup. Since then nearly every player no matter the position has tried the Dream Shake at some point, some even taught by the man himself. If that wasn't enough, Hakeem was also one of the greatest defensive big men to have ever played, leading the league in blocks 3 times and winning the Defensive Player of the Year award in back to back seasons. If that weren't enough, Hakeem also sits high atop of the list of most blocked shots in NBA history. While he was a nightmare to opposing centers and teams, there's no question that Hakeem Olajuwon firmly belongs on the top 10 list of greatest NBA players of all time. 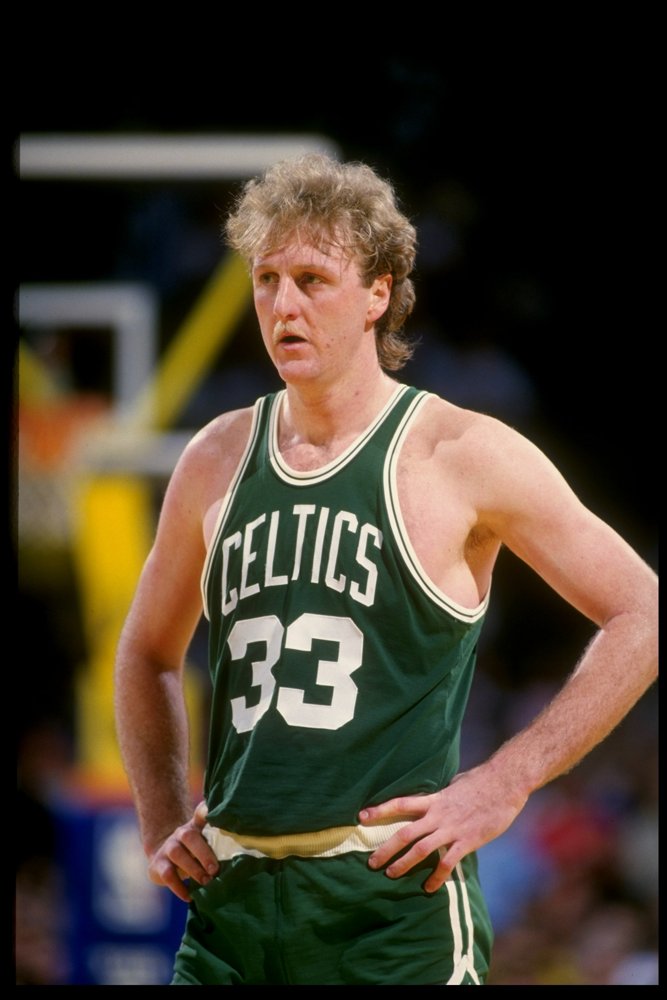 I know what you were thinking, "how in the hell do you leave Bird out of the top 5?". Trust me this was a very difficult choice as Larry Legend is always unanimously among everyone's top 5 greatest players of all time, if not top 3 even. I truly wished I would have included this man in the top 5, but I just couldn't rank him above the most dominant player in NBA history (you'll discover that player's identity in the top 5 list). Larry Bird is without doubt one of the greatest players that has ever lived, perhaps the greatest pure shooter of all time. Bird was lethal, dangerous, deadly, and cold blooded. Bird was also one of the most fierce competitors that has ever played, also not one to shy away from trash talk, Bird's trash talk is almost as legendary as the man himself. Bird is also the only player in NBA history to win MVP, Coach of the Year, and Executive of the Year. While he may be 6th on my top 10 greatest player list, he's firmly number one on the greatest white players in NBA history list. If that wasn't enough, Bird is also without doubt the greatest small forward to have ever played. Whenever you watch the NBA today, you can thank this man for helping to resurrect the once almost forgotten and dead league, albeit with the aid of his magical and fierce rival and later best friend as the feud between Bird's Blue Collar Celtics and his rival's Showtime Lakers rose the league into unprecedented heights of popularity. Now President of the Indiana Pacers, there will never be as great a player as the Legend himself, and that Bird is the word.

The time for the top 5 is edging closer and closer, I know what you're thinking, "who could possibly top Larry Bird?". You'll find out in the next and final article in my series of the 50 Greatest NBA Players of All Time. Right now I'd like to present a small list of players that just missed the mark and fell into the honorable mention list.

Clyde Drexler: Drexler could fly with the best of them, and is arguably one of the greatest offensive players in NBA history, but playing in the wrong era and having to piggyback on the back of Olajuwon to win a title just shoved Drexler off the list by a hair.

Reggie Miller: The greatest three point shooter of all time...if Ray Allen didn't exist. Clearly one of the greatest clutch shooters of all time, Miller was a pest, and wasn't afraid to show it, however a lack of a title (again wrong place, wrong era) and being knocked off the top of the most three pointers made list knocks Miller down to honorable mentions. Spike Lee Approved.

Dkembe Mutumbo: Another great center that dominated in the greatest NBA era of all time, but again playing in the wrong era meant no championship, but that didn't stop Mutumbo from winning an unprecedented 4 Defensive Player of the Year awards as he swatted balls out of the sky like King Kong on top of the Empire State Building swatting planes, only followed with an immortal finger wag and a boastful "Not in my house!!".

Rick Barry: One of the greatest small forwards of all time. Able to shoot from anywhere on the floor and defend like a pitbull. Barry was the greatest white NBA player of all time until Larry Bird arrived.

Dominique Wilkins: Another player that had the same misfortune of playing in the wrong era at the wrong time (notice a theme here?). Nique was a human highlight reel that regularly dazzled audiences with his high flying dunking and sharp shooting. His legendary duel with Larry Bird in game 7 of the 1988 Eastern Conference Semifinals is cited today as the greatest duel of all time.

If you can think of anymore that belong on the honorable mentions list, feel free to list them below on the comments section. Until then stay tuned and stay glued as I finally reveal the Top 5 Greatest NBA Players of All Time in the next article. Believe me you won't wanna miss this, unless of course you've already figured it out and if that's the case....please read it anyway lol. Until next time, keep your feet on the ground and keep reaching for the stars (RIP Casey Kasem).
-1
Login To Vote!
More Articles From luv90s