Barnyard Commandos!! Taking over your TV with extreme prejudice

The cartoon show that pitted hoof against hoof stink against stink, today we look at the episode "Apple-Calypse Now", it's the P.O.R.K.S. Vs the R.A.M
By Byrd_man
On 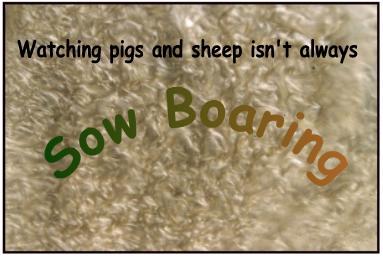 Back when I was about 3-5 years of age there was a store called McFrugals, some of you may remember this place and some may know it's now called Big Lots!. My mom would take me shopping at McFrugals almost on a weekly basis, we weren't poor or anything, but my mom is a deal hunter, she hits yard sales and checks Sunday ads every week. Anyways on my visits to this store I would always head straight to the toy section, and one of my favorite toy lines to buy was Barnyard Commandos. These toys were very limited as far as play value and were alot like Food Fighters(another toy line I bought a lot of) minus the detachable arms and legs, but what they lacked in play value they made up for in appeal, they were even made into a Burger King Promo back when Wiz Kid still made appearances. The Barnyard commandos were the most bloodthirsty, vicious, and insane looking toys I've ever owned, every tattoo bearing nose ringed figure looked pissed off and wielded some sort of rocket launcer or machine gun Turret, these guys meant business, just look at the desperation on thier faces. 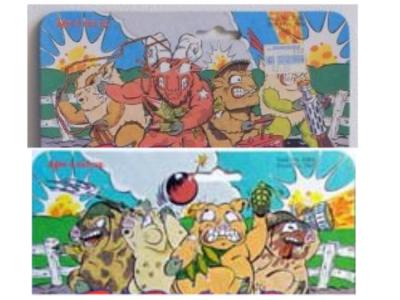 The badass image was what made them a winner in my book, but unfortunately they flopped and that's probably why they ended up at McFrugals in the first place. Unknown to me at the time of my toy purchases, there was a cartoon show which probably initiated the toy line, unknown that is until about 5 years ago. A local video store was having a going out of business sale and was selling all of there rental videos at slightly cheap prices, among these videos was the classic M.C. Hammer hit "Hammerman" and a few other childhood favorites that brought back good memories but hardly seemed worth buying with my allowance being so small. When I saw Barnyard Commandos sitting on the shelf I was flabbergasted in the words of Frankie Howerd never had my flabber been so gasted, I siezed the video and vowed to never put it down, I also bought Pokemom the Movie, yes I jumped aboard the Pokemon Frenzy, but come on we all make mistakes right? I really wish I would have ditched the pokemon flick and snagged Hammerman instead, but hey live and learn. before your read my review here's a random thought, food for thought if you will; why the heck did the creators name the sheep after thier alpha male name, and the pigs after thier dinner menu name?! 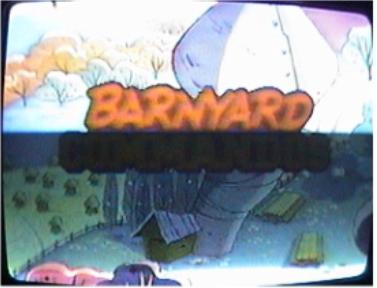 The episode starts out with the two four-hoofed teams harvesting all the appples in a rather large orchard, they are doing quite well and by the end of their labors have gathered enough apples to fill Bill Gates' swimming pool, we see some shots of the different characters acting in their usual manners, there's a brainiac sheep doing complicated math for his all brawn no brain captain who in a funny scene tries to figure how many baskets apples they have gathered (sounds like an old 3rd grade math equation) the captain says something like "Let's see here... 650 apples plus...mumble mumble... carry the basket" anyway there's a fat pig leader who busies himself eating most of what his commrades have gathered. They are nearly finished and ready to call it a day when one of the Porks spots one last rather delicious looking apple in a secluded tree, one of the Rams comments on its appeal and decides to eat it, the Pork says he saw it first and an argument breaks out, Boss Hog (the fat head pig, it's not really his name, but oh well) says in almost an every episode type of way "there's only one way to settle this... we'll have a war" and in two seconds flat both sides are decked out in weapons that look like they could do some serious damage to a house's paint job, most of the weapons rapidly shoot piles of what looks like feces and yellow feces (with the sound effect that Garfield had when he threw lasagna in his mouth) this is where my problem with the show came in, I expected this to be not a blood-bath so much, but at least have some close calls involving fires and explosions, and a few extremely pissed off adversaries, the forementioned toys came with stuff you don't even get to see in the cartoon and the few bombs and grenades youdo see are for display purposes only, I expected to see much higher military intelligence then this!! 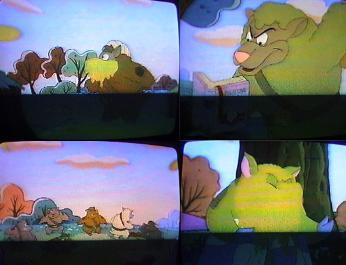 The two sides fight for a while only breaking for lunch, and even then they plan thier next strategic attack and spy on eachother while they eat. 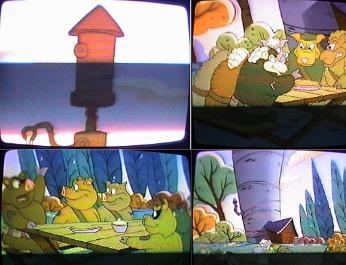 After the fighting goes on for a while a couple of them are carried off on a rocket that is bound to explode at any moment, so they leap off and tumble down a hillside into a canyon. The two see a stone tablet poking up out of the ground and begin to dig it out, once it's out however they begin to fight over it as well. The others gather around and spur them on in thier battle of tug-a-war and the tablet splits into two halves. 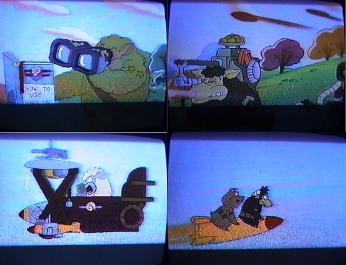 The Rams and Porks retreat to their respective bases eager to decipher the encryptions before the other side does (after each posts someone to guard the apple), the Rams first learn what their's says using "Baaa-write" and after a Pork spy learns of theirs, the smart Pork using "pork latin" explains to the others what his piece says: "Way back in the time of our ancestors they lived in harmony with eachother, they weren't as highly advanced as us and didn't fight at the time. One day Gengas Chicken and his Mongolian hoard and some duck guy came riding into the land with intentions to do bad things, the farm animals therefore hid thier ancient treasure as to keep the Mongals from getting it." The others decide there's no reason this treasure shouldn't belong to them and so they decide to find it, meanwhile the Rams have already started thier search and are stuck without a clue, Boss Hog figures it's no use trying to figure this out because it's all a bunch of hogwash and there is no treasure. The Porks throw their piece of the tablet away and it shatters revealing a large piece of gold, a great treasure indeed, but wait the Rams pick it up and find it's a map that points them to the mountain, so they begin to head eagerly in that direction. 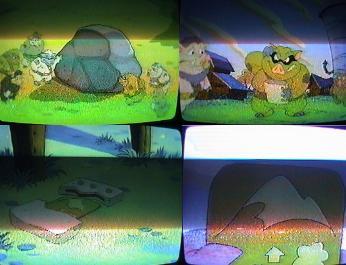 The Porks seeing the rams hurry off figure they must know something and decide to secretly follow them. Once the sheep reach the mountain they find they are stuck again and decide the Porks were right and the treasure is non-existant one Ram kicks a bolder in disappointment setting off a chain reaction that cause the mountain to split revealing a hollow center. The stunned Rams quickly rush in with the Porks close behind, but the door closes just as they get in and the Porks are left to find a doggy door that they are able to gain entrance through. 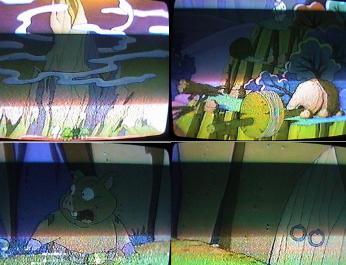 Inside and seperate the two squads befin to exlpore the inner cave searching for the treasure of thier long lost ancestors. They all become very frightened by a haunting ghostly noise and the substantial amount of bats within. 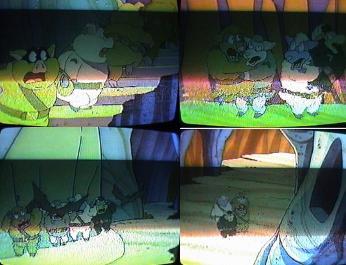 The Rams discover the strange noises are coming from wind blowing through some hollowed out rocks set up to scare away intruders, the Porks however discover a gold/diamond treasure that sits in the center of the mountain; before the Porks can sieze it however the Rams begin making howling noises that scare them away, the Rams then slide down and take the treasure themselves. 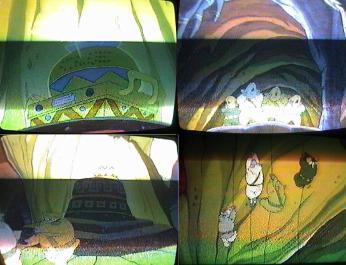 Once outside the Porks realize they'd been had and call in some air support to distract the Rams while they steal the treasure back, another battle breaks out and in the midst of all the calamity Boss Hog gets a hold of the treasure. 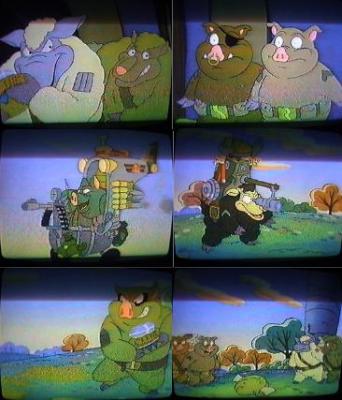 Boss Hog slips however in the slop the two sides are slinging back and forth and the treasure falls to the ground revealing inside the world's largest fortune cookie. Everybody gathers around the cookie and Boss Hog pulls out the paper inside and says "It's a fortune!!" with such surprise in his voice you'd think that he expect to find the lost evidence that proves what started the Great Chicago Fire. A ram snatches the fortune from his hooves and claims it's no fortune, it's the next clue (and I thought the gold/diamond thing was the treasure!!??) 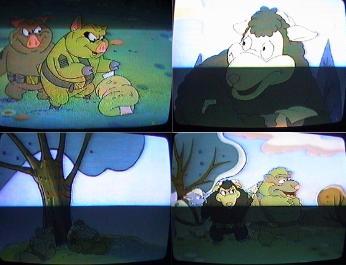 The Ram goes on to explain that they must now travel to a jungle for the next clue, but as they're running they notice the guards by the tree have fallen asleep and the apple is still there. So they give up on the treasure and begin to race up the tree, a Pork and Ram make it to the branch but slip off slinging the apple into a waiting cow's mouth. Boss Hog angrily says "That was the last apple in the orchard!" and instead of attacking the menacing cow they begin another battle with eachother, now we'll never know what the treasure was humph. The end. This is a pretty cool cartoon for what it is, the commando hardly fits in the title since they fight more like we did back in elementary with boys against girls kind of stuff. Voices were pretty good and fitting, Boss Hog quickly established himself as my favorite just because of his. If you haven't seen it too bad, I doubt you'll have much luck finding one, but hey at least you'll have my great review of it right? Drop me a line guys let me know what you thought, thanks for reading and those of you who voted thank you for that as well.

The Porks rule!!
4
Login To Vote!
More Articles From Byrd_man

10
Byrd_man
Subliminal advertising of SMB3 exposed
Ever been playing Super Mario 3 and had the strangest urge to have 8 bowls of cereal? Yeah, I thought so...

My favorite character was Rambaba (I think that was his name), who was some kind of Rambo sheep wo flew around in a fighter jet...

Come to think of it, man that sounds retarded...

Are you sure you want to delete this comment?
I remember seeing it when I was a kid ^^

My favorite character was Rambaba (I think that was his name), who was some kind of Rambo sheep wo flew around in a fighter jet...

Come to think of it, man that sounds retarded...