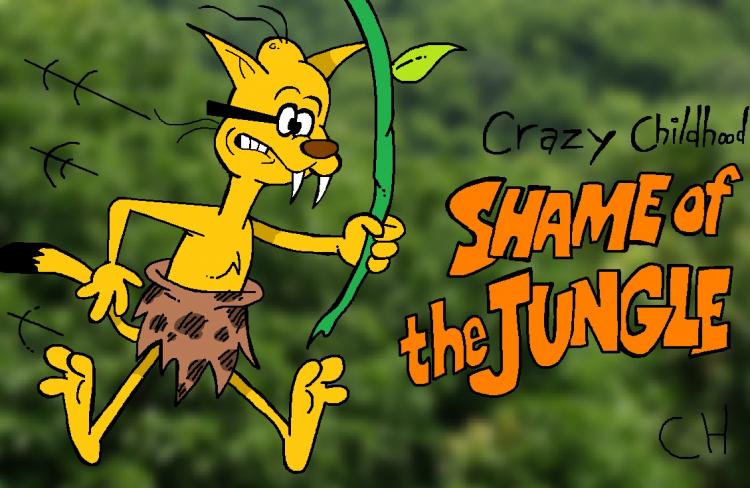 For more pics by yours truly, visit Cartoonlover16's account at Deviantart.com. 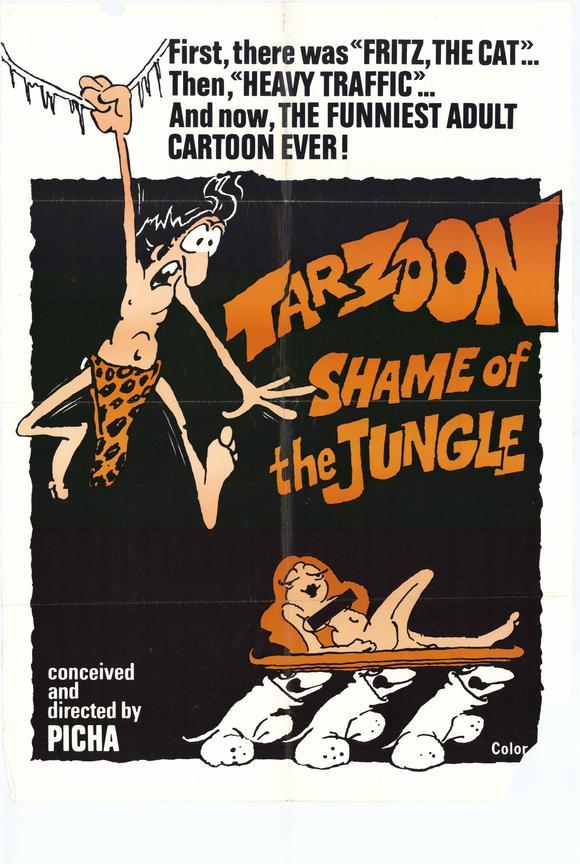 Trust me, you'll be WISHING those censor bars were there.

What do you say we play a quick game of "pretend"? OK, I want you to pretend that you're a young animator who just got out of animation school and are ready to tackle ANY project. While reading the classifieds, you find an ad saying that a small animation studio needs young animators for a low-budget animated film. Jackpot! Not only do you get to work, but seeing how the film is low-budget, you don't have to animate anything THAT difficult, and you can hopefully learn some new things along the way. So you go to the studio and you get the job. So you ask the director, "what is it you need me to animate?" The director replies, "I need you to animate WALKING, TALKING, PENIS SOLIDERS." 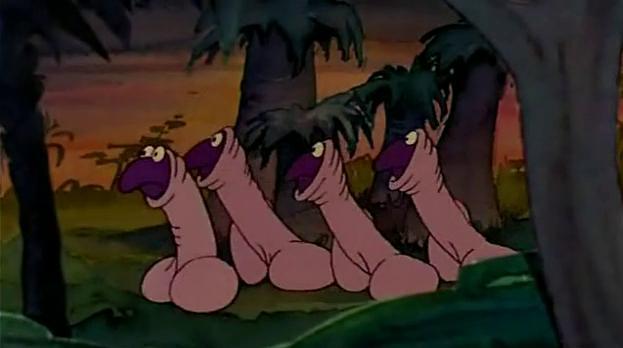 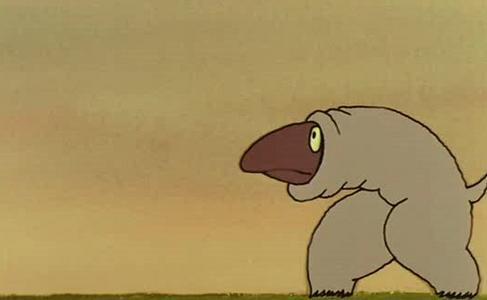 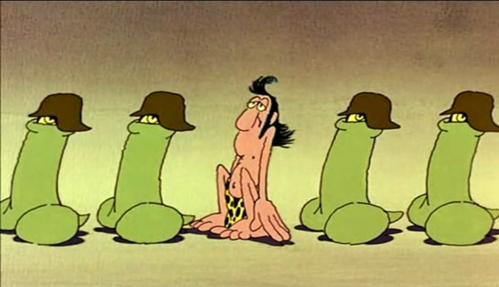 Now I ask you this: Would you accept this perverted challenge or do you run like hell?


OK, the game of "pretend" is over. Time for a history lesson.


The subject of my review originated as a 15-minute short film created by Belgian cartoonist Picha (The Missing Link), and was a huge hit at the 1975 Cannes Film Festival. Due to it's success, an X-Rated film was created only one year later. In it's home country of Belgium, it was known as Tarzoon, la honta de la jungle. However, the Edgar RIce Burroughs estate (the owners of the Tarzan franchise), sued the makers of the film for plagarism. Luckily, the estate lost the case, seeing how it WAS a parody.

Well, that's what you get when you judge your facts about the movie based on the poster instead of actually watching the movie. 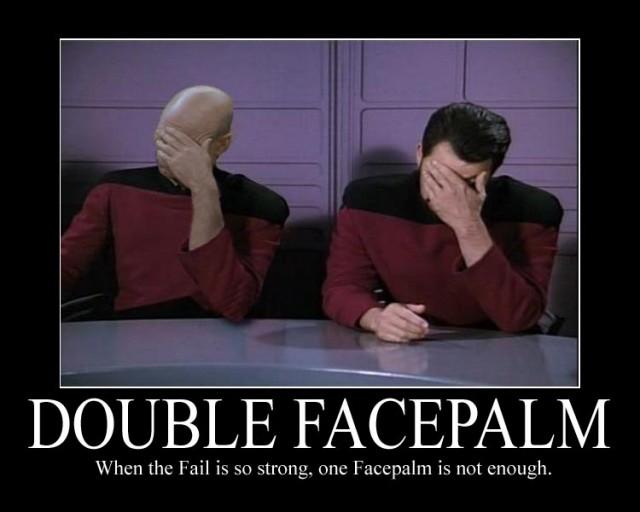 Anyways, when the film was imported to the U.S., the X-rated version was largely unsuccessful in most cities, and theaters were scared to show the darn thing (Just look at some pictures of the movie and you'll see why.). And to make things worse, the Edgar Rice Burroughs estate urged that the "Tarzoon" name be dropped, so the good name of Tarzan would not be humiliated.

So, the film was re-rated to an R, and the film was now known as Shame Of The Jungle. This version was re-written by Saturday Night Live writers Michael O' Donoghue and Anne Beatts and even cast members of the show did some of the voices, and even got the son of the original Tarzan from the 1930's to do the voice of our hero. Now that's dedication to your work!


But was it all worth the effort to get this "beauty" on the big screen? Well, it was a flop at the box office and recieved negative reviews, but has eventually became a minor classic by stoner fans and obscure animation fans. But is it a classic in this animation fan's eyes? Well, it's from the director of The Missing Link, so how bad could it be? 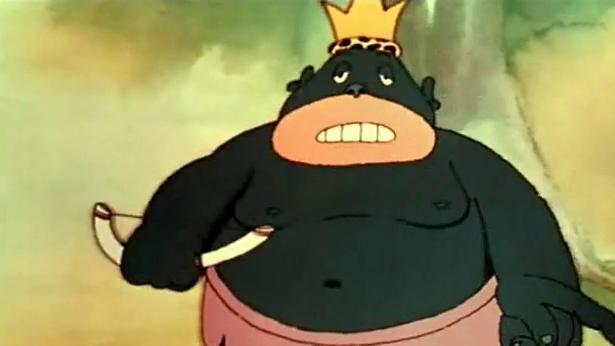 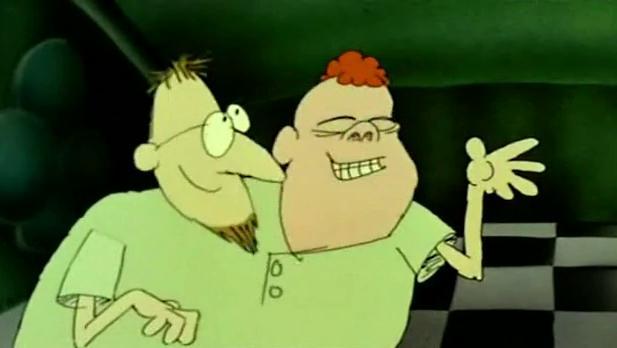 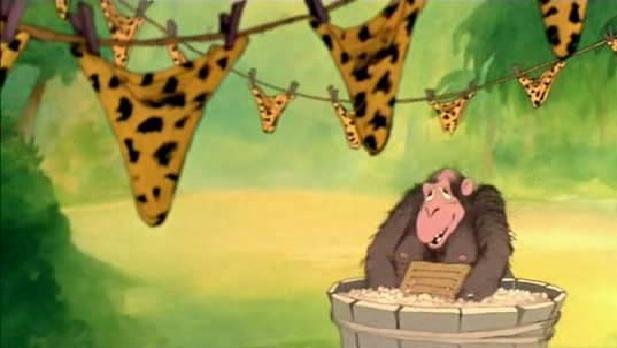 "Wash this, wash that, I'll make them all pay!"

An evil, bald, and multi-breasted queen named Bazonga (Bright) wants to rule the world, but in order for people to take her seriously, she must have a full set of hair (Because the first priority in world domination is vanity, I guess). So she wants the hair of June (Prager), the maid of Shame (Weismuller, Jr.), king of the jungle.

And no, I didn't smoke anything. This is all part of the film.

Though it appears and cheap and crude to the umpth degree, the animation and designs are nice to look at. It's not Disney quality or even Bakshi quality, but much like Rocky & Bullwinkle, it's made up for it's occasionally-ingenious writing and sight gags that do get a chuckle from me every now and then, especially the TinTin joke. 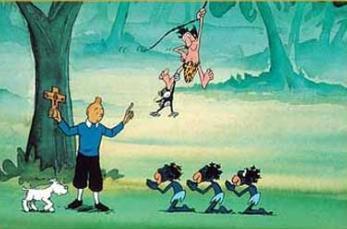 That would've made for an interesting after-credits scene for the TinTin movie.


If you can believe it, the late-great John Belushi has a cameo as a beer-guzzling "perfect master" who flys across the jungle on a carpet run by a flock of birds. Shame eventually comes across this character and hangs out with him for about 6 minutes, the guy gets drunk and falls off the carpet and leaves Shame by himself. There is no point to this scene, it doesn't move the story forward at all, but it's still fun to listen to if you're a fan of Belushi. It's said in the end credits that this character was created by Belushi himself, but considering the film's origins, I find that hard to believe.

Weismuller, Jr. does a great job as the clueless king of the jungle. He manages to keep the minimal dialogue and grunty voice in place, and whenever he does his own Tarzan yell, he takes it seriously. The yell has been made fun of for countless years, so it's lost some of it's lustre. But when this guy does it, it has a primal feel to it and never does any unnecessary changes to it. 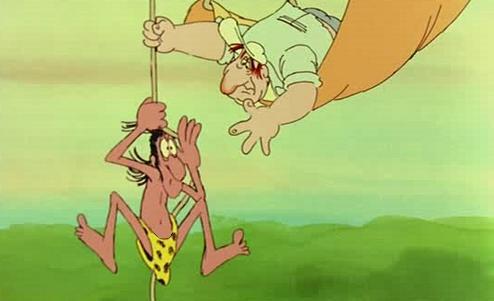 "Just a quick high-five or I'll drop you!"

Well, lemme say that the film ISN'T for everybody. For example, the first minute Shame and Flicka are on their quest, you see Flicka using Shame's penis as a vine to swing on.

Well, you can plainly see that Africa is shaped like a large naked lady and her "obvious location" is "bush county".

Hey, you're lucky you only get to READ what happens. I had to WATCH it!


But seriously, there's more raunchiness to come in this movie. This is humiliating to watch at times, considering that Picha has went on to make two really great films with a message behind it. They had characters doing raunchy things to be sure, but they can make you think, as well. In Missing Link, the film was centered around Man's and his savage and barabaric ways, and Picha's 1987 film The Big Bang showed how war can lead to humanity's demise.

This movie just has a villian with 14 breasts. But hey, that alone could get a man thinking...but I wouldn't get into it. 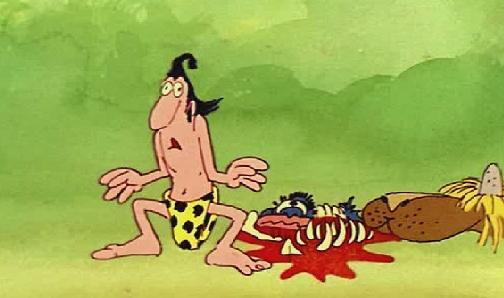 I'd never thought I'd say this, but..where's Miles O'Keeffe when you need him? 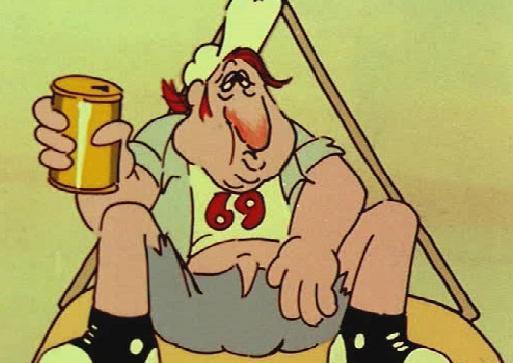 Boy, Wayne from Wayne's World has really let himself go, hasn't he?"

Considering how the director and the stars of this film have moved on to better things, this movie is pretty dated at times. But much like The Nine Lives Of Fritz The Cat, it has a certain charm to it. Looking at it now in a time when animated films are now soccer-mom safe, this is certainly something Hollywood wouldn't dare of releasing, unless if they took that risk.

The film has nice (if crude) animation, the choice to cast Weismuller Jr. was inspired, and the writing can be fun at times. It's definately raunchier than Bakshi's work, so I can't say that it is for everyone.

See ya!
2
Login To Vote!
More Articles From Nails105 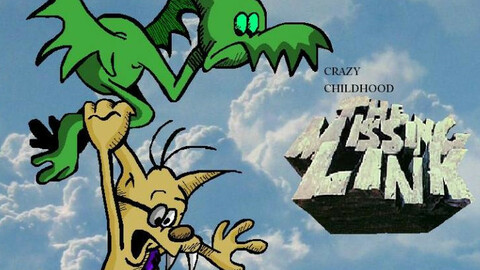 5
Caps_2-0
Sayonara, Karaoke, Or: The Songs That Got Away
You know I love karaoke, but unfortunately, it's no longer a happening thing.
An unhandled error has occurred. Reload Dismiss