In this review we take a look into some of Nintendo's odd commercials from the past.
By Vertex
On 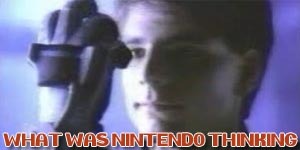 By looking at today's reasonably tame, bland, and wholly uninteresting Nintendo commercials, one thing that does not come into mind is outrageously weird. That however is exactly what they were. At least back in the glory days of the NES and to a lesser extent the SNES. I think Nintendo could really shake up the console wars if they would bring back their old commercial style. I think that even if it was for the sheer "what the hell did I just watch" factor of a weird guy dressed in black shouting out names of characters in odd ways, could really boost sales. Get ready for a wild ride through commercialville, as we delve deep into Nintendo's dark and dirty TV past. 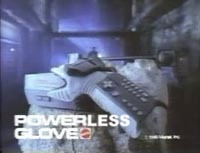 This is the commercial for probably the single crappiest product Nintendo ever put out… No I don't mean the Virtual Boy, I am talking about the Power Glove. This thing never really worked to any degree that would justify the price, and your hand always got really sweaty, but damn it they sure as hell did make it look cool to a nine year old. I mean really though, who did not want to be that Power Glove toting badass Lucas from the movie The Wizard? Answer NO ONE! The commercial starts off with a jean jacket wearing badass, emerging from his foggy domain of cool, so as to totally dominate the NES with his newfound tool of supremacy. I think towards the end he even manages to blow up the TV on one particularly intense Punch-Out match. 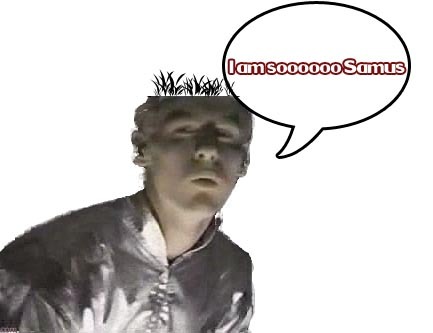 Here we have a combo commercial for Metroid, and Rad Racer. Because there is one thing Nintendo knows, and that is saving money. Cheapness aside, the Metroid segment starts off with a kid who I can only assume is on some kind of hallucinogenic substance, because for a reason beyond my grasp he spontaneously decides to do jumps, and flips. I can only guess they are trying to portray the boy as Samus, but since he looks absolutely nothing like Samus in his gay silver jumpsuit we are left with no other choice but to guess. We are then smoothly transitioned into the Rad Racer spot. If you happen to recall, Rad Racers claim to fame was its ability to utilize the space age effect of 3D glasses. I unfortunately never had a pair of them to play the game with. Which should explain why I do not ever recall finding myself seemingly in a race car as this kid seems to. 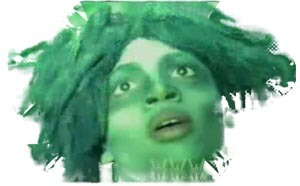 The Virtual Boy was to be the Game Boys successor, but a load of problems kept it from reaching Game Boy like success. The first thing was that there was no real way to promote a 3D product in the 2D world of commercials, It was also not nearly as portable as the Game Boy, and the media was going crazy over how it could damage kids eyes. Which would explain why it gave you a wicked bad headache after playing it for five minutes. In this commercial they are forced to get pretty creative, since it is pretty hard to show a 3D game on a 2D TV. It starts off very Star Warsish, as a mysterious dread-locked figure strides down a corridor towards a menacing Virtual Boy waiting with unknown intentions. The infamous movie announcer voice guy then comes on and proclaims the man we are watching "has it all". He apparently had "the moves", "the punches", the "FIRE", but there was one thing he would never have… "A WAY OUT!" Right then the Virtual Boy stares strait at him with its glowing red eyes, and begins to suck him in, and not even a water spigot can hold him back from its fury. This commercial really reminds me how much the Virtual Boy sucked… I mean who the hell wants to sit and play a game made up of a bunch of red lines anyway. The Virtual Boy was pretty much Nintendo's only system that did so horrible, they just said screw it and gave up on it. 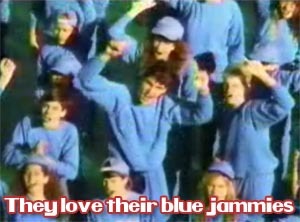 This commercial, is an all purpose NES Mario spot. By once again combining game commercials, Nintendo could save a little money, while promoting some of the older Mario titles. It starts with an extreme close-up, of a guy shouting Mario for no readily apparent reason, and then begins to zooms out to reveal more, and then more people, until it is discovered that apparently the entire world is chanting Mario in unison… Has our carnal love for all that is Mario driven us all mad? If we all loved Mario this much, would we all not be inside PLAYING IT? By the time this commercial aired SMB and SMB2 were pretty old so I guess Nintendo was still trying to squeeze every last ounce out of their two older titles. This commercial was one of the less weird of the bunch, and was actually pretty cool. 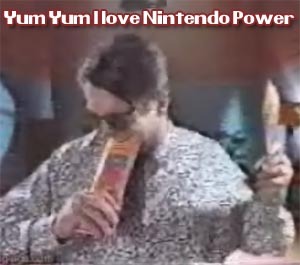 If there was one thing every TRUE Nintendo fan just HAD to have, it was a subscription to Nintendo Power. Sure they never had any "reviews," or ever said anything bad about the games, (even if they were garbage) but somehow they made that magazine look like it was the fucking greatest thing on the planet. How could you live without it!!! What they did have though were lots of pictures. And really when your target demo are a bunch of nine and ten year olds that's all you really need. This TV spot is for that legendary magazine, but you sure wouldn't know it if it were not for the guy yelling Nintendo Power over and over. The heavy guitar riff, and exploding things, don't really help to inform the viewer on what the hell the TV is trying to make them buy. Someone even EATS a Nintendo Power magazine. What this is trying to represent is lost on me. I guess if there is one thing to be taken away from these commercials, it is don't expect anything to make sense. Also just as a note, don't bother calling the 1-800 number. I already did and there was no answer… DAMN! 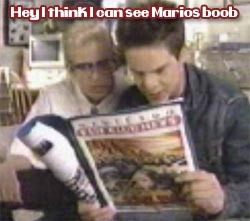 Ok here is where things start to get really weird… The Zelda commercials. I think the people at Nintendo just told whoever their advertising people were (who must have been lunatics themselves), to just make the weirdest freaking thing, in the hopes that it would make their product stand out just enough so that when little Johnny looks at the rack of games he would no doubt remember the freaky assed commercial, and buy that one. Well, that's the best explanation I could come up with anyway. The first Zelda commercial defies all explanation and really is a must see. You have two dorks sitting on a couch drooling over "the latest Nintendo Newsletter", like it was the latest issue of Swank. But this is the best part, this is when they… START RAPPING! Bwahahaha. "It's The Ledged Of Zelda and it's really rad. Those creatures from Gondorf are pretty bad." That is just a snippet from the rhyming prodigy's in this commercial. I don't really know what Nintendo was thinking when they thought up the idea for portraying their customers as hopeless dorks, but this is by far my favorite Nintendo commercial. 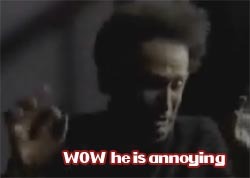 This Zelda commercial was all about just a weird guy, dressed in black, sticking his head into the camera frame and yelling the Zelda character names in obnoxious ways. It really made almost no sense… And really by the time this commercial is over, you really just want to grab that turtle neck wearing assclown, and bludgeon him with a toilet plunger. Were they really this low on ideas? I can see the meeting now... It is 1987 and Nintendo's head honchos are all sitting around a big table trying to think of the next big marketing gimmick for their newest title… One hour goes by… Two… Then three, Bob recommends they blow things up and yell Zelda… No that simply won't do, we already did that for Nintendo Power… Then Rufus, the janitor who scoops out cigarette butts from the ash try chimes in. Hey how about you guys have a nut job dressed in black, jump around and yell character names? You are a genius Rufus! How would you like a real job? Now I don't have any inside info or anything, but I am pretty sure that is how it all went down

Well this concludes our look into Nintendo's dark commercial past. I think it was about when the SNES hit, that the big N must have fired their current Ad staff, because from then on out I think things started to take on a much more down to earth approach. The commercials began to make sense, and the customers knew what they were selling. All jokes aside, considering overall the time and age of gamers back then, I think the commercials were pretty good. Back then, video games had not been around for very long and the majority of the commercials were geared to younger kids. Nowadays the average gamer is in their 20's and it's just no longer wise to have wacky zany commercials anymore.

11
Quote O' Matic
Swat the Fly: "Hey, Boss! You wouldn't hit a little guy with glasses on, would you?"
Added By: Clint_Olson
Mr. Bug Goes to Town
Related Articles