The Wacky World Of Comic Ads.

A look at the sometimes strange, always amusing world of comic book advertising.
By Daniel85
On
One of my favourite things about reading old comics as a kid was seeing all the crazy shit advertised in between the four-colour fisticuffs. Remember the Amazing Live Sea Monkeys? The Charles Atlas body-building regime (are you a 90-pound weakling?)? Those X-Ray Specs which always promised sheer awesomeness, but never delivered? Of course you do!

So, in tribute to that power of imagination (or is it gullibility?) which enables a child to look at a full-page illustration of a bunch o' naked, humanoid fish-freaks and believe that's what they'll get when they just-add-water, I welcome you to the Wacky World of Comic Book Ads! 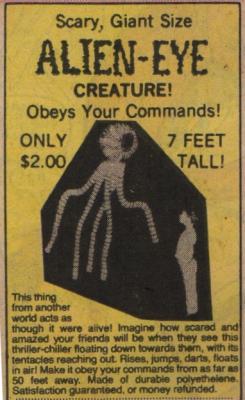 At first sight, this thing looks incredible. What kid wouldn't want a 7 feet tall floating alien orb that they could scare the living shit out of their friends with?

The claim that it 'obeys your commands' makes it seem as if there's some kinda telepathic rapport thing going on. Not for two bucks, kid. I bet it's controlled by some unwieldy puppeteering mechanism that totally kills the effect, and makes all the neighbourhood kids laugh at you instead of fleeing in terror.

Notice how the copy-writer on this ad throws in a Michael Jackson reference with the 'thriller-chiller' line. 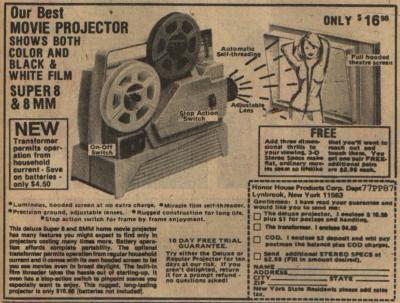 This one seems harmless enough. A film projector for your very own living room, just what you need to show those home movies and vacation reels. But take a closer look at what they're suggesting you might want to do with it... 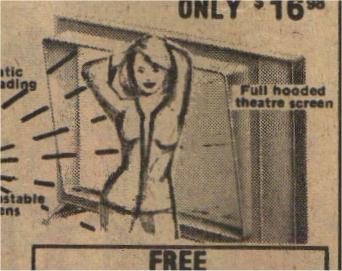 A rather nice looking lady, could be an air hostess, in what appears to be the early stages of a strip tease. Yep, that's the real reason to pick up your own film projector: pornography. 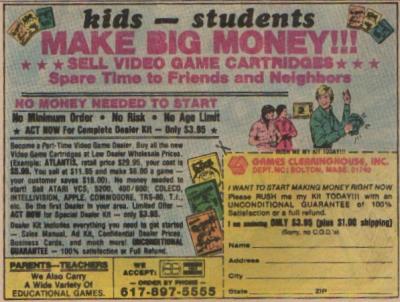 I was always intrigued by the sales clubs advertised in comics, mostly because of the cool swag they offered in lieu of actual monetary payment for the exhausting labour they subjected kids to. Sure, while pounding the pavement to sell Grit subscriptions, Billy got bitten by a rabid dog, swooped by nesting birds, and was kidnapped for three weeks of brutal torture by the neighbourhood pederast, but he finally managed to get enough points for a one-man inflatable raft! Won't Billy's next camping trip be FUN?!

Ahem. Yeah, anyway, this sales club actually sounds pretty cool. This was around the time of the great video game market crash, pre-Nintendo, so I guess the 'Games Clearinghouse' outfit must have had bajillions of copies of Pac-Man for Atari they wanted to get rid of. 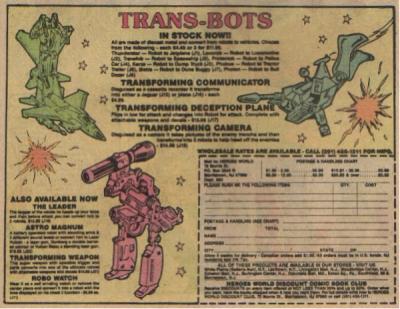 You really have to admire the entrepeneurial spirit which led to these Transformers knock-offs, the "Trans-Bots". I think my favourite Trans-Bot is the "Transforming Deception Plane". Oh there's some deception going on here, that's for sure.

Pale imitation or not; I dig the space motif. You throw a couple of stars and maybe a crescent moon on something, and I'll fucking buy it. 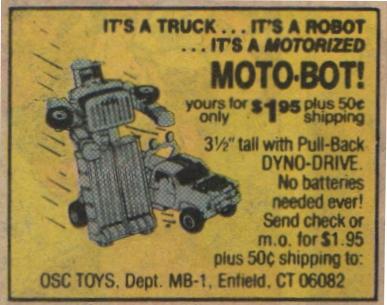 And from that same comic, another Transformers rip-off, only this one sounds like it was copy-written by a ten-year old from the Sixties. "No batteries needed ever!" "Really, no foolin'?" 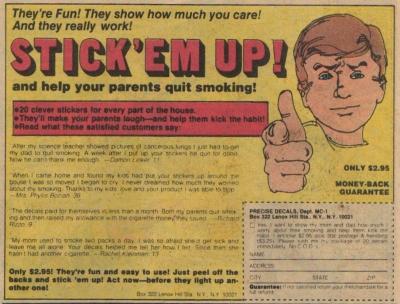 I love this. It's a pack of stickers which kids can put in hotspots all around the house to teach their pack-a-day parents that smoking is not cool.

The idea is that: "They'll make your parents laugh - and help them kick the habit!". So the common wisdom of 'smoking these things will fuck up your internal organs and make you die' doesn't work, but a couple of knock-knock jokes will have them off the fags faster than you can say 'Joe Camel'? Come on!

The sense of urgency and complicity with which the ad closes is somewhat disturbing. "Act now - before they light up another one!"
I'm also kinda weirded out by the kid in the ad. Smug bastard. Still, it's hard to be too critical of him, when you consider what he's in for--

- "Junior, can you come into the den for a minute?"

- "What the hell are these stickers you've been putting up all over my house?"

- "Oh, those. I just thought I could maybe help you quit smoking..." 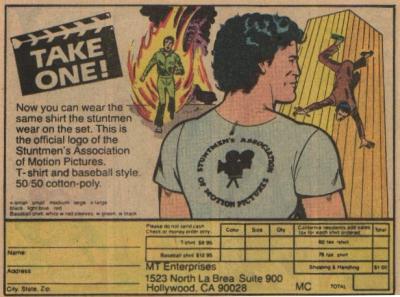 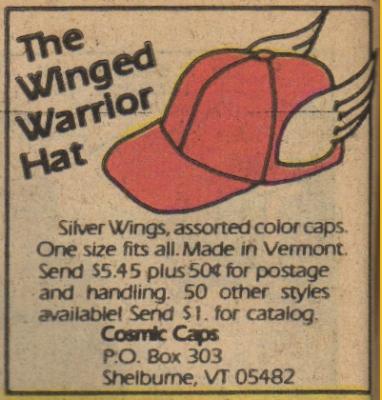 Why is "Made In Vermont" a selling point?! You have 25 words to sell as many of these hideous things as possible, and you're talking about its manufacturing location?!

Furthermore, I can't imagine anyone other than die-hard Thor or Philly Flyers fans buying one of these. (And I'm one of 'em-- can you guess which?!) 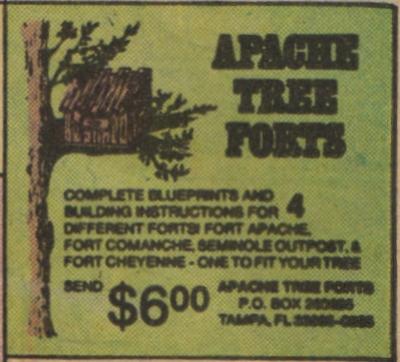 I'm going to go out on a limb here (get it?!) and suggest that Return of the Jedi and the subsequent Ewoks telemovies and cartoon series probably led to a direct rise in the number of kids who wanted tree houses. Hell, I didn't even give a crap about the outdoors until I saw The Battle For Endor. To this day the smell of pine needles makes me think about Wilford Brimley.

Gotta love the art in this ad, which depicts the tree fort perched precariously about twenty feet up, with no visible method of ascension.

Okay, I'll admit it- some of the ads up to this point haven't been that weird or funny. But believe me when I tell you, folks, that I've saved the best till last. Behold: the T-Rex T-Shirt! 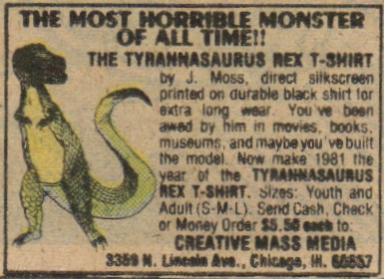 I don't know what I like most about this ad; the fact that these people (Creative Mass Media) seem absolutely convinced that they have come up with the greatest product ever, or that they haven't even bothered to spell Tyrannosaurus correctly.

You have to love the conversational tone: "Maybe you've built the model...", but even with that seemingly surefire method of acting all buddy-buddy with the consumer, I can't imagine that they would've sold too many of these. Creative Mass Media was simply ahead of its time. If they'd just come out with this eight years later, they surely would've made billions riding the wave of Jurassic Park fever. Back in 1985, though, I can only conclude that the visionaries behind Creative Mass Media gambled everything on T-Rex, and just like the dinosaurs themselves, lost big time.

Well, that about does it for this article. I'll be doing more of these as I come across amusing ads (and hey, this is a very small selection from a very limited time period. You should see some of the insane ads in 60s comics!), so that's good news if you enjoyed the article. And if you didn't? That hurts, man. That hurts.