A Tribute To John Williams, King Of Movie Score Composers
By Nightwatcher
On
In my travels (patrols?) I have seen some great movies with great soundtracks to match. Some would say that the list of vocal songs for a soundtrack are the proverbial "glue" that holds the movie together. I disagree with that, the true soundtrack is the score, the music we hear in the background that gives atmosphere to certain scenes. This music sounds great in the movie, but can also be enjoyable by itself. I think a lot of people out there would agree that no one makes a better movie score than the man himself, John Williams, of whom I happen to be a huge admirer (as well as Steven Spielberg). I've made a list of some (if not most) of his best movie themes from the 1970's, 80's and 90's so grab your best earphones and get ready for the ultimate roller coaster ride! (And tell me you won't tear up a little while listening to some of these). 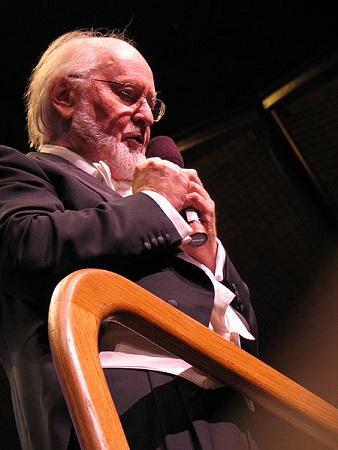 Just when you thought it was safe to go in the water. Based on the book by Peter Benchley (R.I.P.), this is easily one of our most famous fish stories (get it?). A quaint seaside resort town called Amity (gee, I wonder what town it was named for), is terrorized by an overgrown Great White Shark (25 meters in length to be exact). The theme music offers the perfect feeling of dread and peril. I would also like to give a credit to actor Roy Scheider (also R.I.P.) for his role as the main protagonist Cheif Brodey. "We're gonna need a bigger boat".

A long time ago in a galaxy far, far away... A young farm boy on a desert covered planet must learn to become a powerful warrior and save the universe. What better theme to go with such a story than something with alot of action. No opening theme in the Star Wars saga is more recognizable than that of A New Hope (aside from the fact that it is the only Star Wars main theme that youtube seems to have right now). What little kid didn't want to be like Luke Skywalker and wield their own lightsaber? I did, I did! May the Force be with you.

Look, up in the sky! It's a bird! It's a plane! It's a smudge on my eyeglass lens! It's Superman! Faster than a speeding bullet! More powerful than a locomotive! Able to leap tall buildings in a single bound! Superman, aka Superman: The Movie, is considered a landmark in motion pictures as the first comic book super hero movie to hit the big screen. It's no surprise, therefore, that it should be accompanied by such a triumphant sounding theme. Imagine my joy at hearing a new rendition of this same theme music in the new movie Superman Returns (2006). I don't know about you but this theme song makes me want to do muscular, super hero-like poses. Whatever you do, just make sure you hide the kryptonite. "Up, up and away"! (R.I.P. Christopher Reeve).

I haven't kept track of all the Dracula remakes and sequels there have been, but this is the only one to be graced with a score by John Williams. This is a kind of spooky theme that also fits the decade of the movie's release. Apparently the king of vampires refuses to stay dead. "Blood, I vant blood! Bwaahh"! Note: I'm sorry the playback for this is so long. Apparently the person who posted this decided to include three tracks instead of just one. You don't have to listen to the whole thing of course, some of you may not have the time. Also note: This movie stars a very young Frank Langella as Dracula. Most of us 80's babies may remember him as Skeletor from Masters of the Universe. He was also the voice of Archer in Small Soldiers.

Three years after A New Hope became a motion picture legend, George Lucas made a follow up to fill us in on what had happened after the Battle of Yaven (the battle against the first Death Star at the end of A New Hope). Entitled The Empire Strikes Back this new chapter took on a much darker tone than the last and actually shows the Empire gaining the upper hand, thus leading up to an open end. The story would be completed in the final installment Return of the Jedi (1983). What better theme than one that both incorporates a marching element and ties into one of the main villains, and hearing the piece in it's entirety is quite exhilarating. One would almost expect to hear Vader breathing in the background of the piece. "If you only knew the power of the dark side"! *Vader's mechanical breathing*

Indiana Jones (The Raider's March, theme from Raiders of the Lost Ark) - 1981

As a kid Indiana Jones was one of my heroes, as an adult I've pretty much adopted his look for Autumn, with a long sleeved button shirt, brown leather jacket and a cool looking hat (it's not quite a fedora, but it's pretty close). I've even collected the 3 3/4 inch action figure I always wanted now that they have finally been released (he stands watch on my computer desk). The movies were appropriately accompanied by an adventurous music theme. I know it's sad but it now pops into my head every time I think of the Ark of the Covenant or the Holy Grail. Let the adventure live on.

Now usually a touching kiddy story would revolve around a boy and his dog but in this case it's about a boy and his alien. Accidentally stranded on Earth by his family, a little brown alien befriends a ten-year-old boy named Elliot and even forms an emotional bond with him (literally). But between being tailed by the government and our atmosphere not exactly being kind to him, E.T. races against time to contact his family and get himself home. (I like how he uses a Speak And Spell to type in the message to his family. I also start to cry during the goodbye scene at the end. Then again, who doesn't?) "E.T. phone home". Note: This movie features a very young Drew Barrimore in her first big screen role.

Kevin McAllister is accidentally left home by his family when they go off on a trip to Paris France for Christmas (?) and must defend his house from Harry and Marv, a pair of bumbling crooks who have been ripping off vacationing families. Kevin teaches them a lesson by making them set off a series of booby traps that he set up in his house. It also doesn't hurt to make friends with the creepy old man next door. This theme starts out sounding sort of mischievous but ends on a lighter note with two verses from the vocal theme "Somewhere In My Memory". Kevin may start out kind of horrid but he gets better toward the end and this is a nice festive movie for the holidays that teaches us to be grateful for what we have in life. I reviewed it in Nightwatcher's Christmas Part 2. Note: this one is kind of low for some reason so you may have to crank the volume for it.

What happens when you play God by messing with nature? Total disaster of course. John Hammond and his genetics research company, InGen clone dinosaurs and place them in a special compound on an island to creat a "sort of biological park" where people can see these great beasts alive and up close. Unfortunately, anything that can go wrong does go wrong and the survivors of the island's disaster race to find a way to escape with their lives. In my personal opinion the movie was good but the book is better. The movie's theme, on the other hand, is unforgettable. A brilliant and beautiful intro to a movie of the same qualities. There is only one word that can accurately describe this theme: amazing, like the movie itself. Welcome, to Jurassic Park.

What could be worse than a dino island disaster? How about a second one. Dr. Ian Malcolm from the first story stars as the main protagonist of this first sequel set a few years later. It is here that we find out about a second dinosaur infested island called Isla Sorna, aka Site B, where the animals are bred before being shipped to Isla Nublar (the first island) for exhibit. The facilities here were shut down shortly after the failure of Jurassic Park (as well as it's destruction in the book). As the subtitle suggests however, "something has survived". The theme for this movie sounds like a good piece of music to back up an expedition, or in this case, a rescue mission. It should be noted that the movie version of The Lost World is even less accurate to it's book than the first movie. In fact, Spielberg made so many changes to this one that it's almost an entirely different story all together. Oh well, I guess we shouldn't hold it against him. After all, if he had followed the books exactly the movies would have been about four hours long...each. (R.I.P. Micheal Crichton).

Close Encounters of the Third Kind - 1977

I figured alot of retrojunkers out there would want to have me drawn and quartered if I didn't include this one. Before E.T. Steven Spielberg made this, his very first big screen movie. Close Encounters takes place out in the desert of the American west and revolves around the question of whether or not we are alone in the universe (I don't think we are). The real kicker here is that the location from the end of the movie really exists. It's Devil's Tower in Wyoming. I couldn't get a score theme from YouTube because the movie doesn't really have a main theme per se and plus, the only one I could find that was remotely close was over ten minutes long! At least it makes the list though. The score, by the way, is a nice mix of thriller and mystery which fits this movie like a glove. 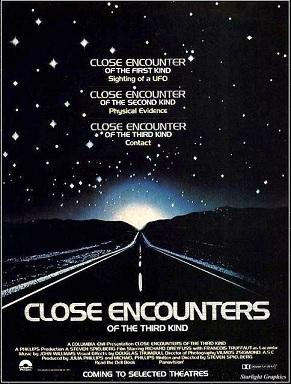 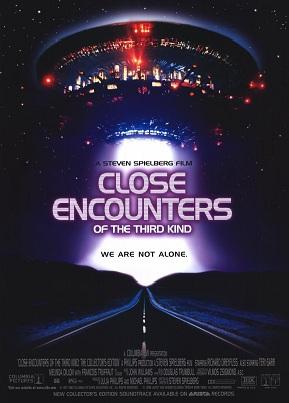 Well this is the end of the ride, I hope everyone enjoyed it. John Williams is well renowned for his movie scores and has quite a history with them. But wait, it's not over yet, Mr. Williams is still in the business as it were, working on yet more scores for our listening pleasure. There are at least three more Steven Spielberg movies coming out that will be accompanied by John Williams' scores, so keep an eye out. And of course he has Harry Potter under his belt too. I'll see you guys next time with a little surprise. Until then, here's to our fondest adventurous memories.


Special thanks to the YouTube users who posted the above "videos" so that we can listen to this awesome music. And, incidentally, to fellow retrojunker 92DreamMaster. Your previous article about the saddest songs from animated movies inspired me. I hope you enjoy.
9
Login To Vote!
More Articles From Nightwatcher