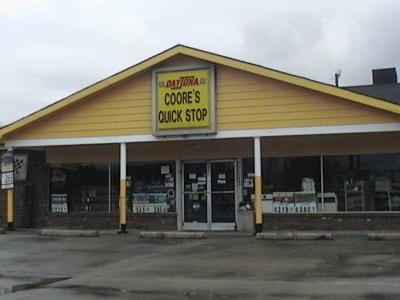 One week before I was born in 1989, my dad bought and opened a convenience store. For 14 years that was his job. He owned the Coore’s Daytona Citgo Gas Station (AKA Coore's Quick Stop). Sorry, no 7-11’s in Greensboro. That was such an amazing store. In the ‘90s, my dad’s main routine was this. For seven days a week, he’d go to the store and do some work. The interesting thing was that he didn’t really work very long in the mornings. Around 10:00 AM, he’d come back home and would usually take me somewhere (Usually Carolina Circle Mall). Occasionally, he’d go in the afternoons to check on things during the second shift. I’d sometimes tag along with him. I’d always get a Slush Puppy there at the store (They were good too). One time in I think 1995; I dropped a Slush Puppy in the deli section of the store. Man was he mad at me! Also in 1995, I started to occasionally go with him on his main morning work. Sadly, he closed the store in December of 2003. I guess it was a smart move because the store would always get broken into at night. The above picture is a picture I took on Christmas Eve 2003 one week after the store closed. 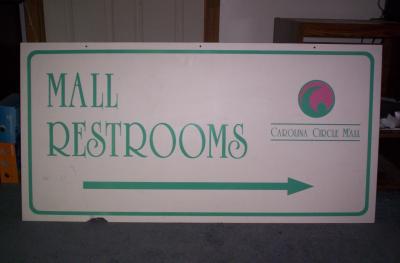 Let’s talk a little more about Carolina Circle Mall. I gave some pretty good information on it in my first article, but let’s go deeper. Carolina Circle Mall opened on Wednesday, August 4, 1976. In the beginning, its main feature was an Ice Chalet instead of the carousel. In 1988, the mall completed its renovation. It now had a lime green-pink color scheme, new emblem, and the famous carousel. I think I started going to Carolina Circle Mall sometime around 1990ish. I’ve always loved that mall. Of course, my favorite years of the mall were 1994-1995. At that time, the mall was still alive, kicking, and doing great business. Even today, I still love that mall. I spend a lot of my time working on my Carolina Circle Mall weblog and telling the world about the mall’s greatness. In fact, I recently bought an original post-renovation restroom sign from the mall. Its picture is above.

1994-1995 were the years I began watching the first sitcom I ever enjoyed. It was the famous sitcom Home Improvement. I think one reason I liked it was because Tim Taylor a lot of times reminded me of my dad because he likes tools as well. However, my dad is able to use them correctly. Also, I think Al reminded me of the other bearded guy on This Old House.

I also enjoyed several movies when I was a 4-5 year old. I’ve always been a fan of the Home Alone movies. In fact, when I was 2 or 3 in 1992, Home Alone 2 was the first movie I ever saw at a theater. Of course, it was at Carolina Circle Mall. I even had a talking Kevin doll. It said things like “I made my family disappear” and “You guys give up or are you thirsty for more”. 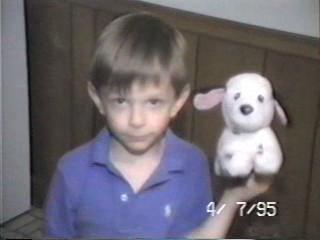 There was one other movie that I absolutely loved. I was a huge fan of the original 1960’s 101 Dalmatians. I collected stuffed animals of the Dalmatians like the ones I got for Christmas of 1994. I probably wore out the video tape of the movie because I watched it so many times. The top picture is of me holding a Dalmatian toy. 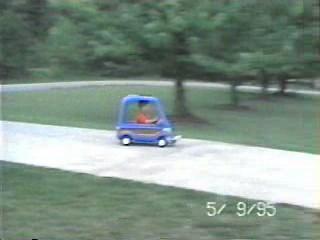 Alright, let’s talk toys. Being a 4-5 year old middle-class American, you must have a good amount of toys. I used to love toy cars especially Hot Wheels. I used to step on them a lot of times. And that hurts! I also had means of transportation. My favorite one was my Power Wheels Jeep. I drove that thing everywhere. Even inside the house! The only thing I didn’t like about it was that it didn’t have a tape deck so I could play my Peter, Paul & Mary tapes. I also had one of those Little Tykes Cozy Coupes, a Little Tykes Station-wagon, and a Little Tykes truck. Sadly, I’ve outgrown those and now I have no means of self-transportation. I can’t drive a car yet. The top picture is me driving my Little Tykes Station-wagon. 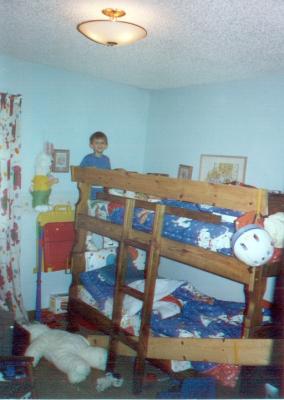 In late 1994, my parents bought me a bunk-bed. Besides the fact that I had two very older half-brothers, I was technically an only-child. I had no need for a bunk-bed, but I thought they were neat. I rarely slept on top, but when I did, it sure was a cool feeling. By the way, I called it a “bump-bed” for some reason. The top picture was taken in July of 1995. 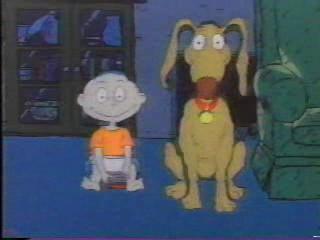 In 1994-1995, my favorite cartoon was the Rugrats. If you remember in my second article, I recorded an 8-hour marathon of the Rugrats on November 27, 1994. I remember my favorite episodes were “Beauty Contest”, “Stu-Makers’ Elves”, and “Kid TV”. Remember, if you want to see the original commercials that aired during that 8-hour marathon in 1994, go to http://roadgeek.zippyvideos.com.

Want to take a look at my retro room? Let me tell you a little story about it. My dad built our house sometime around 1978 or 1979 within walking distance of my grandmother’s house. Well in the early ‘80s, he left the house and moved to neighboring city Winston-Salem where he met my mom. They got married in November of 1985 and moved back in the house. At that time, my room was nothing more than a storage room. I was conceived in the summer of 1989. Until I was born, they thought I was going to be a girl. They bought all kinds of dresses and pink colored things. However when they redid my room in 1989, they painted it baby blue with a little horse border in the center of the walls. Boy they were surprised in November of 1989 when I was born and I turned out to be a boy! As of 2006, I still live in the same room. Although it’s been repainted and a computer is right near where my bunk-bed used to be.

In 1994-1995, I was a big fan of Thomas the Tank-Engine. I started watching him on the famous Shining Time Station. I would collect the little train toys and play with them a lot.

In this period, I also enjoyed some older shows that were before my time. I used to always watch Rocky & Bullwinkle, The Alvin Show (Original early ‘60s Alvin & the Chipmunks), and George of the Jungle. 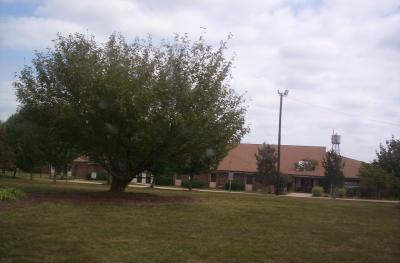 Alright, as promised, we’re going to set the Wayback Machine to a different era. On August 23, 1995, I began Kindergarten at Madison Elementary School. Months before, I began visiting the school with my parents. I even got in trouble one time for messing up a Lego set. And I wasn’t even a student yet! On my first day, my behavior was excellent. And it still is to this day. I’ve very rarely gotten in trouble. On my first day, I actually thought that there would be more fun and less work at school. Boy was I wrong. In September or October of 1995, I went through my first fire drill. To this day, I’ve always hated them! I’m not real good with sudden loud noises. I attended Madison from 1995-2001. The top picture is of Madison Elementary School as of October 2005. 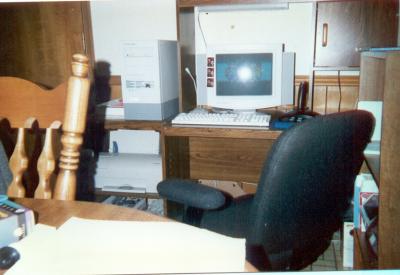 December of 1995 was a wonderful month. One day, my dad decided to buy our first computer. Sadly, I was in bed sick the day he got it. It was a Windows 95 Packard Bell computer. I had previous experience with computers because in late 1995, I would play on my aunt’s Windows 3.11 computer. 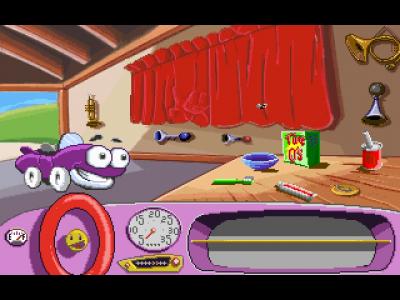 My first beach trip was also in 1996. My mom’s family and I went to Kure Beach, North Carolina. I thought the beach would just be on the other side of town. I was wrong. Instead of a 20 mile trip, it was a 200 mile trip to the Atlantic Ocean. I got bored, but enjoyed the roads at the same time. Unfortunately, the famous Kure Beach Fishing Pier had been blown away by Hurricane Bertha before we got there. I remember seeing big sticks sticking out of the ocean. It was rebuilt in 1997 better and stronger than ever.

Well, that’s it for now. I’m sort of scratching the bottom of the barrel right now, so until I find some more memories for Part 4, remember these words of wisdom. 10, 11, and 12 years might not seem like a long time for most people. But, 1994, 1995, and 1996 contains as much nostalgia as any other year. Anything that includes your past is nostalgic. Please hold on to your past. This is Roadgeek signing off until next time.
6
Login To Vote!
More Articles From Roadgeek

10
Quote O' Matic
Conan: "I am not as think as you drunk I am -Conan"
Conan the Destroyer