The Sweet Return
By Klaymen
On
Sony must have been pissed at 989 Studios for ruining Twisted Metal, so they got the original SingleTrac team, now known as Incognito, to make a new game for the PS2. Instead of making a new sequel, David Jaffe took a different approach... 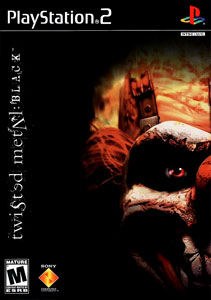 In June 18, 2001, we were given the awesomeness that was Twisted Metal: Black. Such a nice thing done by Incognito after 989's crap that they pulled (I'm looking at you, Twisted Metal III.). However, Incognito also decided to provide more stuff like new characters (Junkyard Dog, Brimstone, Crazy 8, and Manslaughter were newcomers) and practically EVERY vehicle had a new driver (barring Sweet Tooth, as Needles Kane still drove that, Axel was different, and Charlie Kane, the pilot of Yellow Jacket, was a zombie controlled by his own son [it makes sense in context]). They also brought back Darkside (and upgraded Darkside by giving it a new special, which I dub as "The Darkside Ram". A much better special than that puny Death Blast from the first game), Yellow Jacket (and gave Yellow Jacket spike projectiles this time as opposed to the Molitov Cocktails from the first game), and Shadow (which retains the special from World Tour).
Some existing vehicles were redesigned however, for example, here is Warthog: 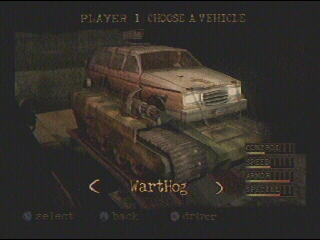 I wanna point out however was the different approach they made would be easy to identify if one saw the rating. This is the first Twisted Metal game to receive the M Rating, and no it's not because of the vehicular combat. The reason why is because of how dark this game is compared to the previous entries. The stories were very graphic, edgy, and flat out unsettling, ESPECIALLY Sweet Tooth's. However, the question is were they good stories? YES! After 989's "Stories" for Twisted Metal 3 & 4, Incognito made very well written stories. The only downside is that if you lived in the PAL regions. When the game came out in the PAL regions, the game was heavily censored and the stories were removed (that was only one of the removals, I'll talk about another important one soon).

Another added thing was the fact you could interact with the environment a little bit more with it, meaning you could destroy more minor stuff, very notable in the Downtown level. However, there was another form of censorship (albeit with a good reason) which was in the Junkyard level. Keep in mind, this game came out back in 2001. In the Junkyard level you would see a 747 plane circle around the arena. In order to unlock Yellow Jacket, you had to shoot down the plane to reveal a secret passage. Talk about being too soon, because that same year, the infamous 9/11 attacks happened, causing the plane being censored in the PAL version and possibly the Greatest Hits edition (I have the original version, not that I'm proud of shooting down the plane to get a character). However, the game was still very fun.

Now let's talk about the bosses:

See this guy, he's Minion. Minion once again is a mid-boss, but is not the demon this time (SPOILER ALERT: It's Marcus Kane, translate Minion's code to figure it out along with the secret of the game. SPOILER ALERT: The game takes place in Sweet Tooth's mind). However, compared to Minion's previous renditions, this guy is almost impossible. In order to actually be able to actually damage Minion, you have to disable his shield be destroying 4 plates on his exterior. How hard is destroying the plates you may ask. It's hard. VERY HARD! It also doesn't help that Minion also has a flamethrower for his special weapon that has improbable accuracy and is the most devastating weapon in the game. You wanna keep your distance from him. Once you destroy his shield however, unleash all of your weapons on him and he's finished. Minion is an unlockable character in this game, but to unlock him, you have to beat the game with everyone, including Manslaughter, Yellow Jacket, Axel, and Warthog. Minion now has his own stage where you take him on, Minion's Stadium (excluding The Maze from 4, what I mean is this is the first stage in the series where you fight the boss only)

Now for the final boss: 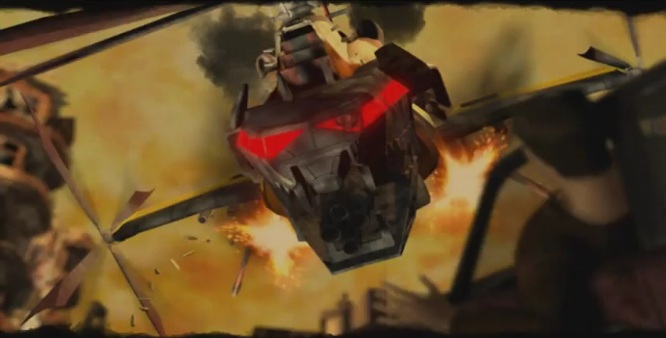 See this, this is Warhawk, your final challenge. Before I talk about Warhawk, I wanna point out that Warhawk was intended to be playable, but that was scrapped once he was found to be way too powerful for multiplayer. Now then, you fight him at the Abandoned Skyscrapers at one particular skyscraper. Warhawk also has a shield, but in order to destroy it, you have to detonate 4 Tanker trucks near it (it's easier said than done). Warhawk has got to be the cheapest boss in any Twisted Metal game, EVER! Warhawk likes to use missiles a lot, so take advantage of the shields there. Warhawk will attempt to destroy them however.

Now let's talk multiplayer, this was one of the first games for the PS2 to have online functionality (if you had Twisted Metal: Black online, that is. The servers are now shut down for TM: Black Online) It's still fun with a friend.

For this game, I will not post the stories for like I did with the other games, the reason being is that they aren't just simple endings and I'd suggest you buy the game yourself to see them.

After Twisted Metal: Black set the series back on track, we couldn't wait to see what's next: 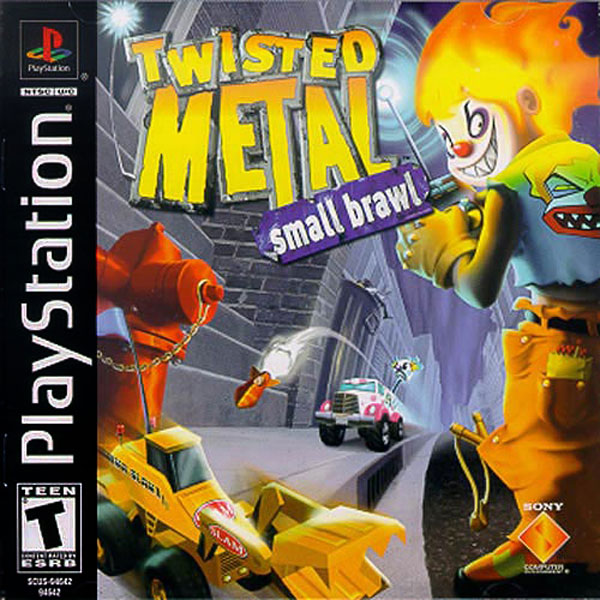 What we got was an unexpected entry aimed for kids known as Twisted Metal: Small Brawl. It's still car combat, BUT WITH RC CARS! Anyways, they used Twisted Metal 2: World Tour's engine once again for this game and it was pretty fun to play. The game was comical as well, but it worked for this game (I am aware that David Jaffe did put some dark comedy in the other entries also, but 989 just made everything way too silly). They also remixed several tracks like Los Angeles: Quake Zone Rumble (Playground Peril), Cyburb slide [used in Twisted Metal for Warehouse District Warfare](Easy Death Oven), Moscow: Suicide Slide (Gridiron Gore), Holland: Field of Screams (Tree Top Rumble), Dark Tooth's theme (Shock Therapy), and Stalk N Roll [original Twisted Metal, used when you weren't fighting enemies] (Holiday Havoc).

I'll now talk about the bosses. 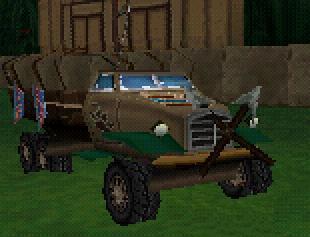 See this guy, this is Trapper. He replaced Minion in this game, but is still a very difficult boss to fight. You fight Trapper in the 4th stage of the game, Minigolf Mayhem. Trapper's special weapon is a red monkey (from the game, Barrel of Monkeys)that fired like a ricochet bomb, only difference is that it would multiply if the attack were to collide with anything, thus giving a very annoying special weapon. The other reason why the fight was difficult was that the battlefield would decrease in size when Trapper appeared. It doesn't help that Trapper had the second highest armor in the entire game (Trapper's armor was 8, Darkside had the best armor in the entire game, Darkside's armor was 10). In order to unlock Trapper, you must beat the game with everyone (Darkside, Axel, and Mime included. In order to get Darkside, shoot the plumbers rear with napalm or a roman candle to reveal a secret. In order to get Axel, shoot the swings in Playground Peril. In order to unlock Mime, you first need to get Holiday Havoc by getting 30 kills in endurance mode. Then go to Holiday Havoc on Endurance mode and shoot down all of the stockings). 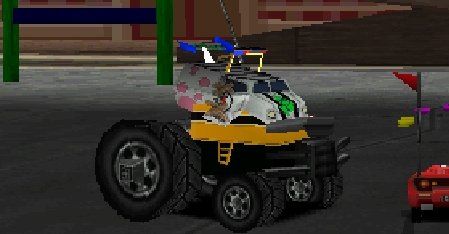 This here is Piecemeal, he is the final boss of the game. You fight him in Now Slaying, a movie theater. Piecemeal's special weapon is that he has access to every special weapon in the game, but it is situational as it depends on the enemies on the level (to put it in English, he can only access weapons of enemies that are on that stage, except for Sweet Tooth's for some reason) but he will always have Darkside's, Outlaw's, and Hammerhead's special no matter what. As opposed to other final bosses in past Twisted Metal games, Piecemeal behaves very differently. In order to summon Piecemeal, you must take out one out of the 4 enemies you are fighting. Then, once you take out 25% of Piecemeal's health, he will retreat. You must destroy another enemy in order to bring him back. Compared to past final bosses, Piecemeal was quite easy for me. In order to unlock Piecemeal, you have to beat the game with Trapper on Hard mode.

As usual, here are the endings(before you click on the video, this contains Axel's cut ending, so before you complain, you have been warned):

In 2005, development on a sequel of Twisted Metal: Black was in development, but they canned it. But what we got next instead was:
(Broken YouTube Link Removed)

This game was really fun! In 2008, I got to play this because of the PS2 port released since I never had a PSP. Now then let's begin. It's a direct sequel to Twisted Metal 2: World Tour, so this game removes Twisted Metal 3 and Twisted Metal 4 from the canon (Thank God). Story is once again the same, Calypso holds tournament like always. Blah Blah Blah. They also brought back every character from Twisted Metal 2, except for Minion, which reminds me:

Time to talk about the bosses again: 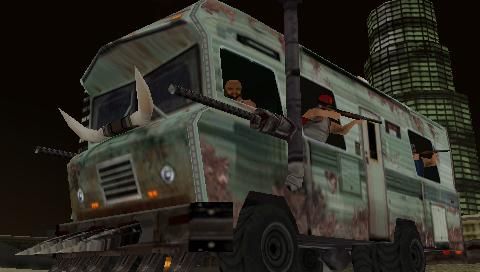 This here is Cousin Eddy, the replacement for Minion. Cousin Eddy's special is a ram similar to Darkside's. You fight him at LA (not the 2nd stage, LA-Cousin Eddy is the stage). He fights similar to Minion from Twisted Metal: Black except he deploys 4 ATV's at the start. Destroy them in order for Cousin Eddy to be active. In order to unlock Cousin Eddy and ATV, you just need to defeat Cousin Eddy. ATV sucks by the way, he has the worst armor and attack in the game. 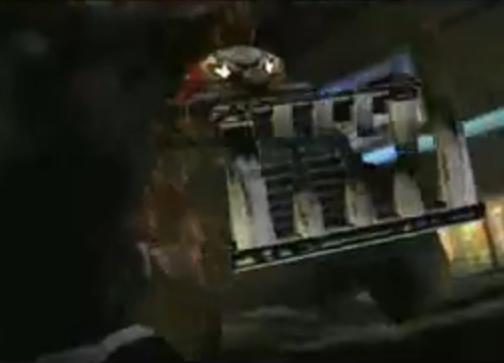 Guess who this is, it's Dark Tooth. He is the penultimate boss, and his battleground his Tokyo. The driver of the vehicle is Marcus Kane and Needles Kane, which are revealed to be the same person, just different personalities. Dark Tooth fights very aggressively (but not as aggressive as the one from Twisted Metal 2. Thank God). Dark Tooth's special is similar to Mr. Slam. Dark Tooth's stats are maxed out. In order to unlock Dark Tooth, beat the game just once. Now for the final boss:

Meet Tower Tooth, the final boss. Tower Tooth's special is a very omnipotent tazer that is potentially the most destructive weapon in the game. Tower Tooth, stat-wise, is the best character in the game, but then again, so is Dark Tooth. Tower Tooth in order to beat him, a good strategy would be to gather plenty of Swarmer missiles and have at him! In order to unlock Tower Tooth (he's only playable on challenge mode however), beat the game with 5 characters.

Here are the endings to Twisted Metal: Head-On:

If you had the PS2 port of Twisted Metal: Head-On, you also got this with it:

I remember seeing that trailer back on E3, and my reacion...
TWISTED METAL IS COMING BACK, BABY! 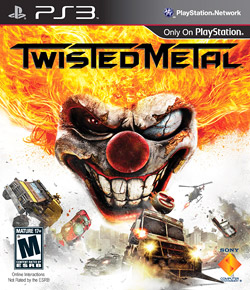 And no, I'm not going to talk about this one. Why? Because it just came out last year on Valentines Day.

Anyways, that's the end of my retrospective. 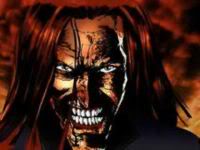 "I am Calypso, and I thank you for reading this retrospective on Twisted Metal..."

This is Klaymen, and I'll see you next time.
2
Login To Vote!
More Articles From Klaymen 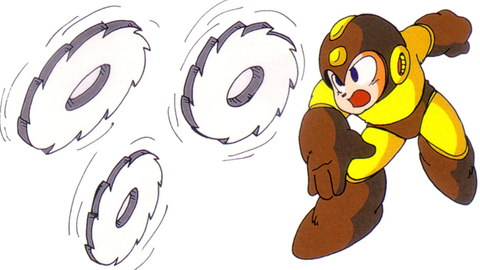 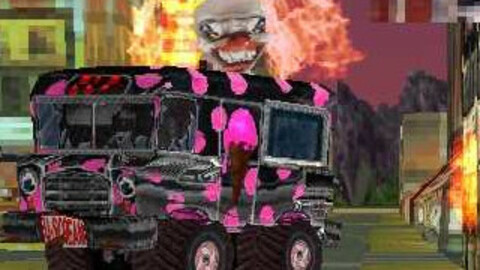 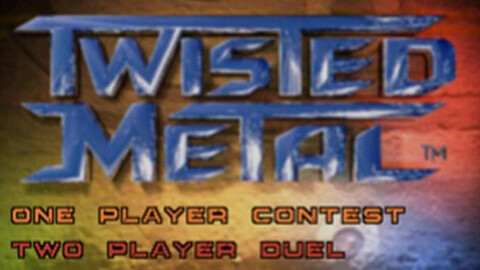 8
Jason43
Top Ten 1980s Board Games
Your X-box ain’t got nothin’ on my Pop-O-Matic Bubble.
An unhandled error has occurred. Reload Dismiss