Your X-box ain’t got nothin’ on my Pop-O-Matic Bubble.
By Jason43
On 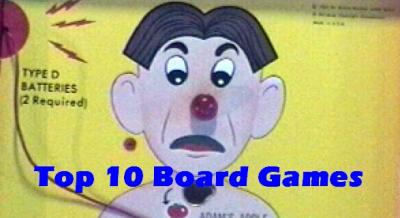 It’s hard to believe that there was a time not that long ago, when there wasn’t 943 satellite channels to sway our boredom, we didn’t have 18 video game systems for each TV in the house and the only thing we knew about computers was that Mathew Broderick could change his grades with one. Yes, it may seem like the dark ages compared to today, but there was always one thing that we could depend on to ease the pain of our primitive existence… the board game. Granted, the board game was not a tool you used often. In fact, it may have only been a weapon of last resort saved only for that grim time in between after school cartoons and Knight Rider. They may not have seen a lot of action, but they did their job well, keeping you occupied for a solid 27 minutes until you completely lost interest. But the 80’s board game specifically was a thing of beauty; you didn’t just have a board, a few game pieces and a couple dice, you had electronics, mechanical devices and 3-dimensional structures. They were indeed magical creations packed neatly in a flat cardboard box. So enough of my pointless rambling, here’s my top 10 1980’s board games. 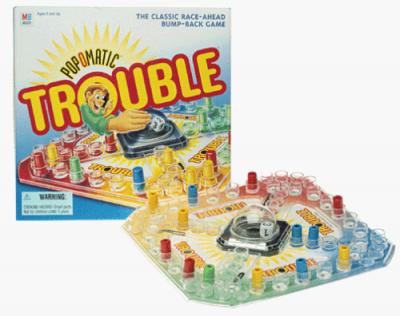 10. Pop-O-Matic Trouble – Now, I know there are a few other games to feature the ol’ Pop-O-Matic, but no other game whored it on TV like Trouble did. I have to admit, my fascination with this game as a child revolved solely around that little plastic dice filled dome. It took playing craps to a whole new level. Actually, I never played Trouble, but the commercials always made it look so damn cool. What can I say, I was easily impressed. Because it’s fun getting into trouble, with the Pop-O-Matic Bubble. Indeed. 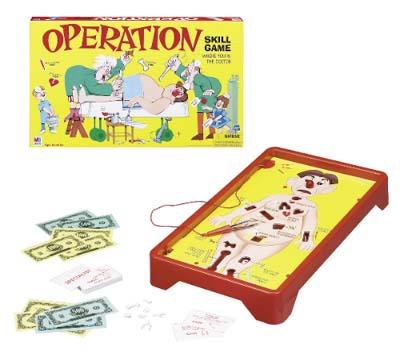 9. Operation – For the aspiring surgeon in the family. You guys know the drill…remove the pieces using the little metal tweezers without touching the sides. If you do, there will be hell to pay in the form of the most annoying sound ever invented. To be honest, I can’t believe that this game has made it all these years more or less unchanged. It’s surprising that a kid hasn’t gouged an eye out with the tweezers, or electrocuted himself on the massive D battery, or that a concerned, overly religious parent hasn’t spawned a letter writing campaign about the naked dude plastered on top of the thing. So for the sake of sheer longevity, Operation earns the number nine spot. BUZZZZZZZZ! 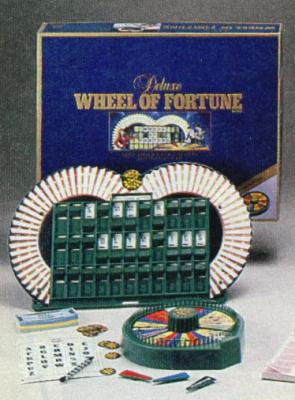 8. Deluxe Wheel of Fortune – It’s just like having Pat and Vanna in a two-foot wide cardboard box you can store under your bed. I was never much into game shows as a kid and definitely didn’t care for their board game counterparts, but this game was just cool. It featured a pretty damn good reproduction of “the wheel” and was actually fun to play for a suped-up hangman game. Granted, it wasn't a game made for an only child, which I was. Needless to say, my games didn't last that long. 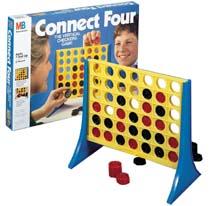 7. Connect Four – All of you should remember Connect Four. It was the glorified tic-tac-toe game in which you had to, you guessed it, connect four checker pieces horizontally, vertically or diagonally. It had significantly less flair then the other entries on the list, but it was a damn fun game nonetheless. The winner earned the right to flip the little switch on the bottom of the plastic rack, dumping the pieces all over the floor. The loser had to sort the red pieces from the black. That’s a fate I surely didn’t want.

6. I Vant to Bite Your Finger –Without a doubt the most obscure entry on the list. This is another one I never played, but always wanted to. Players would take turns sticking their finger into Dracula’s mouth with the possibility of him biting you every time you did it. In retrospect, that doesn’t sound that great, but I always had visions of the game taking off one of my friends fingers in a vicious board game battle royal. Looking back, I doubt the game would have lived up to my five-year-old mind’s twisted expectations. In fact, what kind of five-year-old wants his friend to loose a finger? I must have been a sick little shit. 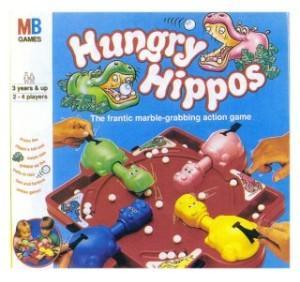 5. Hungry Hungry Hippos – This is a game even the slowest of children could enjoy. It required absolutely no strategy or skill on the kids part. They only needed to beat the living shit out it and collect the most plastic balls. And what six-year-old doesn’t love beating the living hell out of a little plastic hippos ass? Not this little tyke. 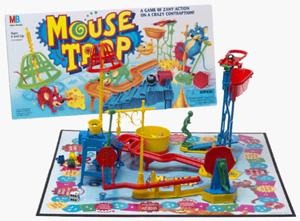 4. Mouse Trap – I know it(as well as a couple other games on the list) pre-dates the 80’s, but I spent countless hours with this game as a child, never once actually playing it. I mean, after you spend all that time setting it up, balancing the cage on top of that pole, setting the diver on his platform, putting the ball in the bucket etc etc, who actually has time to play the damn thing. To be honest, they didn’t even have to make the thing a game for it to sell. It was a great toy on its own. I was more than happy just watching the chain reaction that took place from turning the little crank at the beginning of it. Who wants to go and ruin that by playing a game with it? 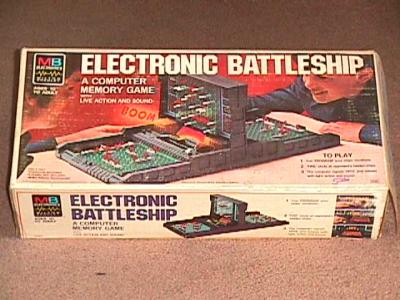 3. Electronic Battleship – I know this is stretching it for a board game, but Electronic Battleship was too damn popular not to include. Basically, it was the same old Battleship game only with pointless flashing lights and sounds. And pointless flashing lights and sounds make everything better. Hell, they could have put out a version of checkers with some LEDs and electronic explosions, thrown a $30 price tag on it and had the hottest Christmas item that year. It didn’t matter that Battleship was possibly one of the most boring games ever created, if it could induce a seizure, kids loved it. 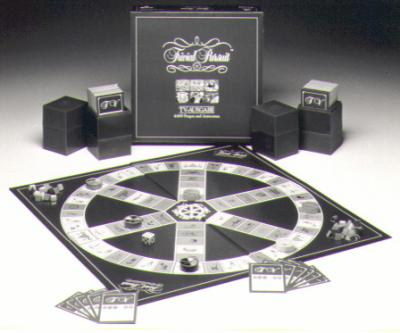 2. Trivial Pursuit – You know, I never really cared for this game. In fact, I downright despised it. My grandmother went through a brief phase where the immediate family had to come out every Saturday night and play Trivial Pursuit. I tried my best to participate. I really did. But the fact is, my seven-year-old mind just couldn’t compete on a professional trivia level. I usually lasted about ten minutes or so until the adults gave me the boot. Luckily, my grandmother lost interest after she realized everyone else in the family had lost interest long before her. And with that, my sad, sad Trivial Pursuit career came to an end. As much as I hate this game, even I have to admit it’s probably the most well known 80’s staple on this list, thus earning it the number two spot. My grandmother would be proud. 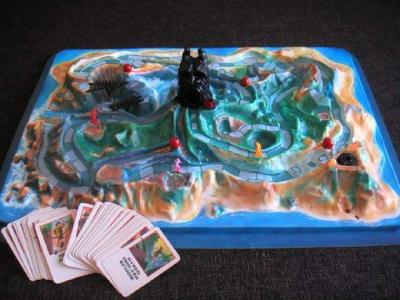 1. Fireball Island – Now this was a board game. It had it all; a giant plastic island, bridges, traps, treasure and a fireball spitting island god to name some of the key features. If you wanted to be Indiana Jones, this game was a step in the right direction. Long story short, you took turns making your way around the island, avoiding plastic fireballs that the little plastic god would hurl at you and try to collect the gem to win. For some reason, this game wasn’t around long. I can’t imagine why any kid wouldn’t want it. Seriously, if this game didn’t appeal to you, there was something wrong. They made special classes in school for the kids who didn’t want to own Fireball Island.

There they are, the top ten 1980’s board games. I know there are several othergames like Crossfire and Clue that should be on the list, but whatcha you gonna do. There's something you guys can discuss in the talkback section...how I fucked up this article and didn't put _______ on the list. You know you want to. So until next time, don't get your battleship sunk.
8
Login To Vote!
More Articles From Jason43 19
Quote O' Matic
Marcy: "All I know is I woke up this morning with a man in my bed. I don't even know who he is."
Al: "Well, that's easy, he slept with you, he's the stupidest man on Earth."
Peggy: "Al, we're talking about sex, leave it to those who do it."
Married ... with Children 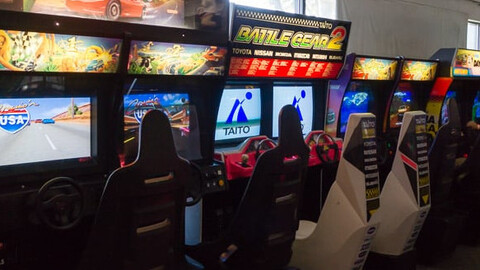 53
Zen_Champion
The Most Underrated Sequels
Does part two really have to mean part awful?
An unhandled error has occurred. Reload Dismiss