Only the best of the biggest toys!
By Jason43
On 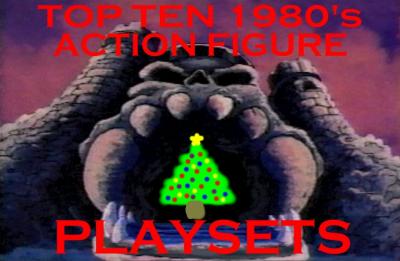 Since my last top ten list seemed to get a lot more feedback than my other articles (what, you people don’t like Madballs?), I’ve decided to repeat what works. Some of you may have had a few of these. Some of you may not have had any of them. Some of you may have been spoiled shits and had all of them. But enough beating around the bush. Here’s THE TOP TEN 1980’s ACTION FIGURE PLAYSETS! Just in time for Christmas too! Feel free to print this out and mail it Santa. 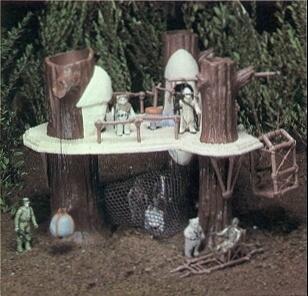 10. Ewok Village (Star Wars) – A.K.A the ultimate tree house. It’s somehow ironic that the Ewoks, the weakest creation of the Star Wars universe (not counting the prequels), got the best playset. If you ask me, it should have been the Wookie Village. Not that an army of midgets in Muppet suits isn’t a site to see, it just would have been even more impressive with an army of eight foot tall dudes in Muppet suits. Regardless, Ewok Village was a damn nice toy. A working elevator, a net trap, swinging boulders and an actual rotisserie were just some of the features. Not to mention some of the unnamed features. Han met his fate many times via tree branch hanging. Leia, depressed by the fact that she made out with her brother, many times took a suicide leap off the edge of the village. Let’s face it; death by rotisserie gets old quick. Now that I think about it, I was one disturbed little bastard. 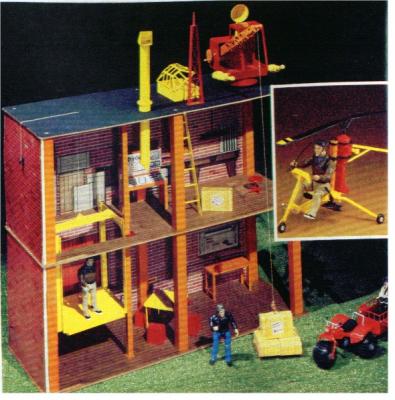 9. A-team Command Center (A-Team) – I pity the fool that didn’t have the A-team Command Center. Sorry, I couldn’t resist. This was the secret warehouse hideout of the rogue military squad. Packed with all sorts of nifty features such as an elevator, a working crane, escape hatches and a gold chain polishing station, the A-team Command Center was ready for action. It was also a pretty good-sized playset, which came in handy when you wanted to play a nice game of “the A-team avoids Mr. T”. I’m sure the real actors played that game many times on the A-team set. Hey, I think getting an idea for Fox’s newest reality show: 3 white dudes and Mr. T living in a warehouse. Damn I’m clever. 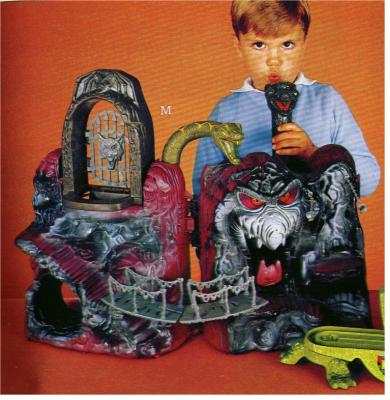 8. Snake Mountain (Masters of the Universe) – Castle Grayskull for the bad guys. While Snake Mountain is evil in its own right, I think the bad guys got the short end of the stick here. He-Man’s fortress of solitude, Castle Grayskull(see below), was way more wicked. But why should the bastard of the Masters of the Universe playsets get placement on the list? Because it came with a microphone, that’s why. I know it’s not that impressive by today’s standards, but in 1984, it was a cool feature. Just look at the kid in the picture, all rockin’ the mike and shizzle. That kid actually went on to become Eminem. 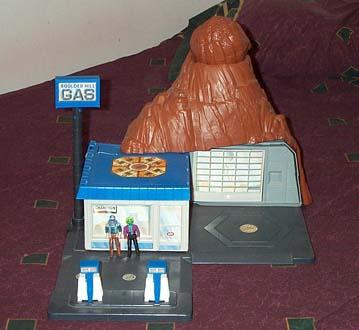 7. Boulder Hill (M.A.S.K.)- M.A.S.K. was without a doubt one of the coolest toy lines of the time. With many of the toy companies trying to get in on the transforming robots action, Kenner took the idea to a different level with a line of cars, planes, motorcycles et cetera that transformed into different, battle ready vehicles. Boulder Hill followed that same principal. Its gimmick was that it changed from an innocent gas station, to the heavily armed M.A.S.K. headquarters. Sorry, no smart-ass comment about this one. It’s just too good of a toy. 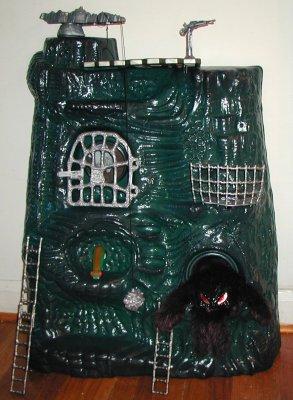 6. The Hyve (Sectaurs) – Most of you probably don’t remember Sectaurs. They were a short-lived figure series in the mid 80’s along the same line as He-Man. Their main gimmick was that the insect themed figures flew around on giant bug puppets. You heard me…. puppets. They were a lot cooler than they sound on paper. Well, as cool as they could be considering you have to shove your hand up their asses. The coolest thing produced under the Sectaurs name by far would have to be the Hyve playset. Basically, it was a Castle Grayskull rip-off to the tee. Only this had puppets. Because everything’s better with puppets. Plus, it earns points for be frickin’ huge. And speaking of Castle Grayskull… 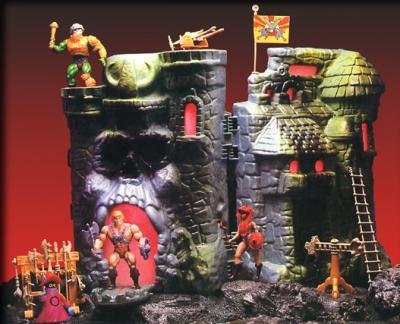 5. Castle Grayskull (Masters of the Universe) – The most evil looking playset in the universe. Look at it… it could double for a stage prop at an Iron Maiden concert. In fact, I don’t think this thing could look more evil. Maybe if you stamped the number of the beast across the front of it, but that’s a big maybe. This is the toy you stowed in the closet when Grandma came over. If anything was going to set off one of her God this, Bible that rants, Castle Grayskull was it. It had its share of gimmicks; an elevator, trap door, draw bridge et cetera. To be honest, it could have just been an empty plastic shell and I would have still loved it. Its evil appearance alone would have easily made up for it. 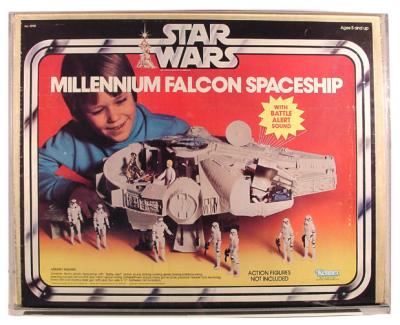 4. Millennium Falcon (Star Wars) – I know this thing was technically a vehicle instead of a playset, but anyone who’s actually held one would agree with me on this. The Millennium Falcon was damn big, thus qualifying it as a playset. All right, understand that to find ten playsets from twenty years ago, I have to pull something out of my ass. And here it is. But even with its questionable status as a playset, this is one damn cool toy. It’s Han Solos spaceship for crying out loud. It had all the normal toy spaceship features; working landing gear, opening cockpit and a cheesy battery operated ‘laser’ sound. On top of that it had a storage compartment with its very own, get this, storage compartment. Perfect for all the would-be stoners looking to hide their stash from the Galactic Empire. 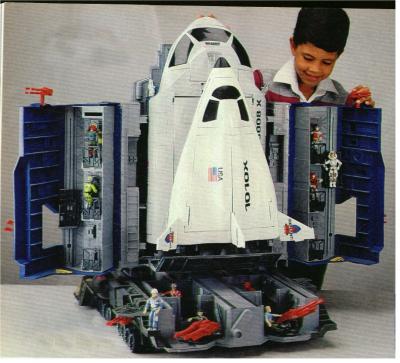 3. Defiant Space Shuttle (G.I. Joe) – G.I. Joe had some quality playsets and this is no exception. Unfortunately they also had some of the more expensive playsets and this was also no exception. Because of this, I doubt many kids got to enjoy it. It’s a shame too, because it was one cool toy. Not only was it a space shuttle, but a space station and a rolling gantry as well. If any toy was a worthy accessory to your Sgt. Saughter action figure, this was it. At ease, disease. 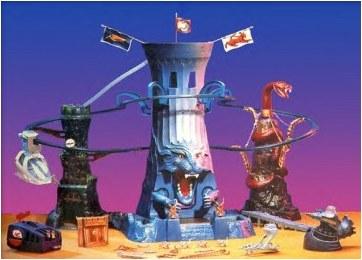 2. Eternia (Masters of the Universe) - This is basically the Holy Grail of He-Man collecting. Super rare and bringing huge dollar amounts on ebay for a complete set, Eternia is definately one nice playset. It consisted of one large castle, with a scalled down Castle Grayskull on one side, and a scaled down Snake Mountain on the other, with a working mono rail system connecting all three buildings. I'm not sure why He-Man would need to take the mono rail over to his arch enemies place, but it was a neat feature none the less. It also kept with the theme that dying toylines had to bring out a giant toy at the end of their run. If you happen to have one of these still sitting in you mom's basement, tell her not to sell it at her next yardsale. You'll probably be able to put your kids through college with it. 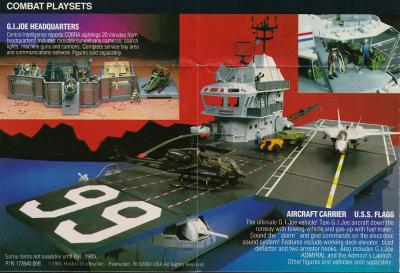 1. U.S.S. Flagg (G.I. Joe) - Not just any hunk of plastic was going to get the number one spot on this list; just the most impressive playset, and this is it. The seven-and-a-half foot long G.I. Joe aircraft carrier. This thing was a monster. While it had many cool features that I’m not going to mention, this thing had one feature that no kid could resist. It was HUGE! I think you could stand every G.I. Joe figure ever made on the deck, and still have room to take a nap on it. It's that big. And on top of that, it actually floated. So not only was it a playset, but a bathtub accessory as well. What, you guys didn’t have a twenty-foot bathtub? Losers.

There it is everyone, the ten best playsets of the decade, also known as the top ten toys my parents were too cheap to buy me. Hope you like it and enjoy the Christmakwanzikah season, yadda yadda.
9
Login To Vote!
More Articles From Jason43