Welcome to the Trump Castle...
By McTom
On
== Introduction ==
It wish it was a joke, but Donald Trump is now almost officially running as Republic candidate for the next American presidential election in November 2016. But I am not here to talk about politics. Instead I want to focus on Trump's video game legacy - because there have been quite a few officially licensed video games featuring the megalomanical and narcissistic billionaire. Let's have a look at them! 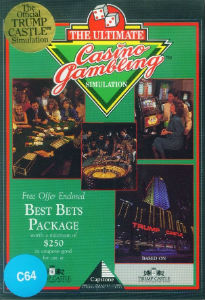 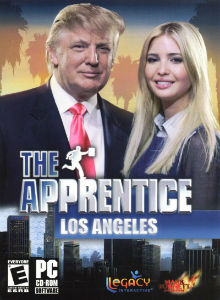 == Trump Castle series ==
From 1988 to 1993 Capstone Sofware published the Trump Castle series, basic gambling simulation games. The first game, officially entitled Trump Castle: The Ultimate Casino Gambling Simulation (1988), was released for Atari ST, Amiga, Commodore 64 and DOS. In this game you can play six different casino games (BlackJack, Craps, Keno, Poker, Roulette, and Slots) in the so-called Trump Castle casino-hotel. Only real goal seems to get in a high score table. On the box of the game there's a picture from an actual Trump Castle and some photos from people gambling in the casino.

Trump Castle II (1991) offers also six casino games (Roulette, Blackjack, Baccarat, Slots, Poker, and Craps), but adds the possibility to 'explore' the Trump Castle (however this is not available in the CGA edition). You can have a look at the hotel's apartments in pixelated 90s images, 'talk' with the people in the hotel or check out the newspaper of the hotel, the so-called 'Castle Courier'. This game was available for DOS and Amiga.

Trump Castle 3 (1993), only available for DOS, offers the same six games as the previous game, but with more variations. This time you can explore the casino in a cheesy third-person view. However, the casino games are still played in a first person mode or in a above-the-table mode. 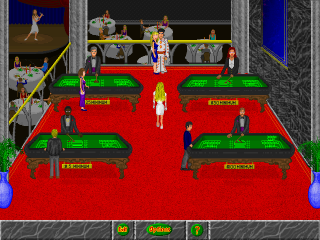 == Donald Trump's Real Estate Tycoon! ==
In 2002 Activision published Donald Trump's Real Estate Tycoon! for Windows. (Yes, the title is written with an exclamation mark - however only on the box, not on the title screen). Trump's head is on the front on the box and the package of the game has the slogan "Take on the king!" written on it. (Also a Trump helicopter is shown, flying between the towers). The graphics of this business simulation game are decent (somewhat like SimCity 3000) and the goal of the game is mainly to accumulate money and construct building on empty slots, while managing some details (like rents and loans) and competing with AI players. If you manage to get far enough, the game lets you compete with Donald Trump himself. 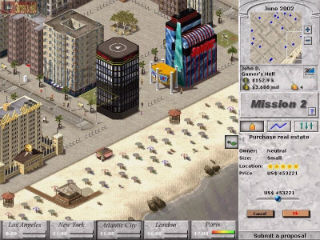 == The Apprentice: Los Angeles ==
In 2007 Legacy Interactive developed and released The Apprentice: Los Angeles for Windows. The package of the box shows a very large photo of Donald Trump and his daughter, Ivanka Trump. This simulation game is based on Donald Trump's U.S. television show The Apprentice, that he co-hosted with his daughter for some seasons. Like the show, the goal in the game is to find a new 'business star'. To this purpose you have to manage stores like a sushi bar and a boutique.

The Apprentice: Los Angeles for Windows (2007) 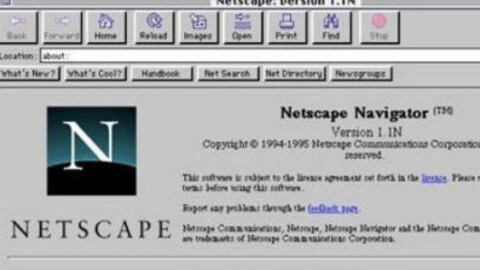