Green Jellö - Not the Food!

The greatest band out of Buffalo, NY. Or anywhere else actually.
By System
On 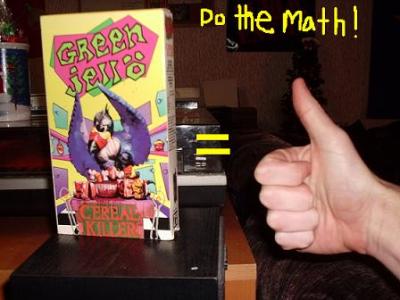 It was around 1994 and my uncle was moving out of my grandparents. He had left a bunch of unwanted swag that I could have. What did I find? The greatest VHS tape I would ever own. It was title "Cereal Killer", by the band Green Jellö. This tape had some of the funniest songs and accompanying videos I had ever heard/seen.

I'm sure most people reading this have already realized I'm writing about the band who created the beauty claymation music video "Three Little Pigs". This band quickly became popular in the mid-90's, however their popularity dwindled into "cult classic" famehood. Let us learn more about this fantastic group that is, for me at least, reminiscent of a time when music videos were cheap, cheesy and freakin' sweet.

As for the girls in the pic, not sure of their names, but they play bongos with their "bongos". Sweeeeeet!
There were also a few guitarists that featured on some of their tracks. 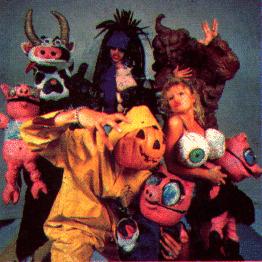 Now for a brief history of the band:

Green Jellö formed in the early 1980's in Buffalo, NY. With the intention of being the worst band in history, they hit the club scene. After being, almost ritually, booed and pelted by their audience they caught a break. They opened for the Ramones 1984. Just as usual they were the targets of beer, jello, pudding and other confections. The Ramones were displeased to say the least.

After releasing an EP and creating a shocking stage show, the band decided to make a change in direction. They donned large costumes, resembling the infamous GWAR dressings. In 1991 Green Jellö had their big break. They were signed to a company called Zoo Entertainment and instead of releasing an album they released a video tape (see picture at top of article). The tape entitled "Cereal Killer" had some of the funniest material seen on TV. The video contains 11 songs/videos and a behind-the-scenes featurette. The most famous being "Three Little Pigs", you know....the one with a pot-smoking pig and a wolf-slaughtering Rambo. They also introduced great characters such as: Shitman, The Cow God and The Skajaquada (named after New York State Route 198 - The Scajaquada). Anyways, the video became so popular that the band released all of the songs on a CD called "Cereal Killer Soundtrack". 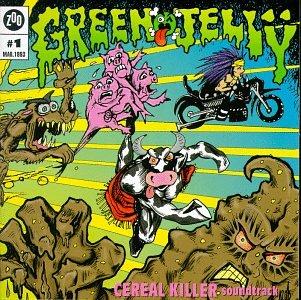 The band became quite successful and toured around the globe. Later the band released a second album called "333". 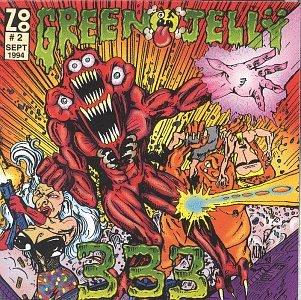 Hey I know what! I'll give you some cool facts you may not know about Green Jellö:

1. In 1992 Green Jellö was sued by Kraft and had to change their name to Green Jelly.
2. In 1992 Green Jellö was sued by General Foods because their sweet-ass video cover portrayed Toucan Sam towering over the mutilated bodies of Snap, Crackle and Pop. He truly was a Cereal Killer.
3. "The Bear Song" is featured in Dumb and Dumber.
4. For all you gamers, Green Jellö recorded the soundtrack for SNES' Maximum Carnage.
5. As of 2006 the band has had over 200 members.
6. The drummer, Danny Carey, is now the drummer for Tool!!
7. Speaking of Tool, the voice of the pigs in "Three Little Pigs" saying "not by the hairs of my chinny chin chin" is actually Maynard James Keenan, the singer for Tool!
8. "Cereal Killer" has a parody of The Sex Pistols hit "Anarchy in the UK". It's based on the Flintstones, called "Anarchy in Bedrock"
9. Green Jellö appeared on the Gong Show in 1987.....they were gonged.

To conclude, there is a lack of pictures of this band and their videos on the web. I'm also incapable of taking screenshots from the tape as I do not have a TV in card. So I'll leave you with links to their best, in my opinion, videos:

Cereal Killer (this song has a great guitar solo)
http://www.youtube.com/watch?v=B_8b9WvfL10

I hope you all enjoy...and are now jealous of anyone owning a copy of the tape, muuuahahahaha!
7
Login To Vote!
More Articles From System

12
Quote O' Matic
Iphigenia Poole: "Shouldn't we be doing something?"
Brisco: "Randolph's gonna be 50 feet down. What do you want me to do, go out there, and wrestle him in some underwater life and death struggle? Me desperate for air and him behind glass - smiling in an oxygen-rich environment? No thanks! I'll wait until they get back on shore; then I'll get Randolph and the plates."
Iphigenia Poole: "...seems sort of anti-climactic..."
Added By: System
The Adventures of Brisco County, Jr.
An unhandled error has occurred. Reload Dismiss