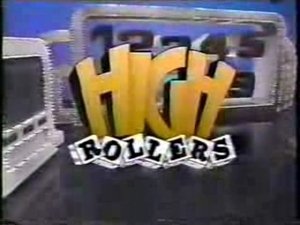 High Rollers is an American television game show based on the dice game Shut the Box which aired on NBC from July 1, 1974 to June 11, 1976 and again from April 24, 1978 to June 20, 1980. Two different syndicated versions were also produced: a weekly series in the 1975–76 season which ran concurrently with the daytime version, and a daily series in 1987–88. Heatter-Quigley Productions packaged all versions of the series except the 1987 revival, a co-production of Merrill Heatter Productions and Century Towers Productions. The game was very simple, a game show version of the board game "Shut The Box". Two contestants competed by rolling oversized dice to knock the number 1-9 off of a board. To determine who can control the dice, a simple question, typically a yes/no question was asked, with the winner getting control. The player could then remove any numbers that add up to the numbers on the dice. The game was over when the board was cleared. Originally, certain numbers has a prize under them and clearing the number made that player win the prize. Later on, the prizes were placed in columns and clearing the column won the prize. Hosted by Alex Trebek from 1974-1976 and 1978-1980 and Wink Martindale from 1987-1988.