Making Fiends is an American animated television series based on the web series of the same name. The series ran from October 4, 2008 to November 1, 2008 on Nicktoons Network. The series is Nickelodeon Animation Studio’s first animated series to be based on a web series, and follows the evil Vendetta and the new happy but dim-witted girl, Charlotte, at school in the gloomy town of Clamburg. Vendetta hates Charlotte and tries to destroy her in each and every episode. 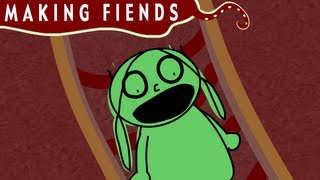 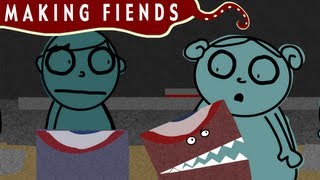 0
Quote O' Matic
Oolong: "Come on, Mao Mao, this is your chance to meet all the beautiful princesses!" Mao Mao (Oolong): "Ah! Yeah, maybe so, but what good that's gonna do me if it means getting myself killed?! -Oolong"
Added By: System
Dragon Ball
Related Articles

29
Nightwatcher
Nightwatcher's Patrol #1
A breif look back at the late Jim Varney and his title character Ernest.
More Articles
An unhandled error has occurred. Reload Dismiss