Dora The Explorer is a Nick Jr. show about young Dora Marquez. In each episode she goes out on an adventure to help someone in need. She always asks the viewers for help as well as her talking backpack which has all you'd ever need and her talking map which always knows the way. She values her family despite spending almost all of her time outside. Her best friend is an optimistic, hyper, and athletic monkey named Boots for the red boots he always wears. Other characters on the show include Swiper the Fox who is always stealing items from Dora's party and once stole Boots' boots(despite this, Dora and all the other characters on the show never hold a grudge on him), Isa the Iguana, Tico the Squirrel, and Benny the Bull.

4
Quote O' Matic
Hyacinth: "I'll invite them over for one of my candlelight suppers. -Hyacinth"
Added By: System
Keeping Up Appearances
Related Articles

-16
Celeste
Why Are We Brainless
For Talking About Groups Like The Backstreet Boys?

41
dalmatianlover
There's Nothing Good on TV!
Television used to be good, but now see how it changed and now sucks today.
-12
Retro4Everybody
Nicktoons Extravaganza(W/Pics.
Not Just Cartoons,Nicktoons!

28
mysticwryter
Board Games!
A look back into my closet.
More Articles
Related Commercials 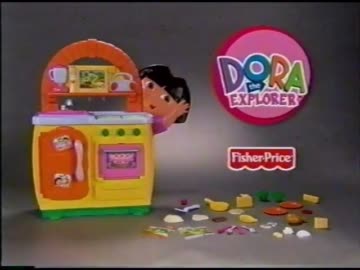