Cannibal Holocaust (1980) is a controversial exploitation film directed by Ruggero Deodato from a screenplay by Gianfranco Clerici. Filmed in the Amazon Rainforest, the movie tells the story of four documentarians who journey deep into the jungle to film indigenous tribes. Two months later, after they fail to return, famous anthropologist Harold Monroe travels on a rescue mission to find the group. Eventually, he recovers and views their lost cans of film, which reveal the missing filmmakers' fate. The film stars Robert Kerman as Monroe, Carl Gabriel Yorke as director Alan Yates, Francesca Ciardi as Alan's girlfriend Faye, Perry Pirkanen as cameraman Jack Anders, and Luca Barbareschi as fellow cameraman Mark Tomaso. Cannibal Holocaust is a well known exploitation film because of the controversy following its release. After premiering in Italy, the film was seized by a local magistrate, and Deodato was arrested on obscenity charges. He was later accused of making a snuff film due to rumors which claimed that certain actors were killed on camera. Although Deodato was later cleared of these charges, the film was banned in Italy, the UK, Australia, and several other countries due to its graphic depiction of gore, sexual violence, and because six animals were killed on camera. Many nations have since revoked the ban, yet the film is still barred in several countries. This notoriety notwithstanding, some critics see Cannibal Holocaust as a social commentary about civilized society.

This is a Blu-Ray/DVD trailer from Shameless Screen Entertainment circa 26....

This is the trailer without watermarks.

This trailer was originally posted to YouTube by giofre.
Posters Quotes
Alan Yates: "[while filming a burning hut full of terrified natives] It's beautiful!"
Added By: Clint_Olson
PABS Reporter: "[first lines] Man is omnipotent; nothing is impossible for him. What seemed like unthinkable undertakings yesterday are history today. The conquest of the moon for example: who talks about it anymore? Today we are already on the threshold of conquering our galaxy, and in a not too distant tomorrow, we'll be considering the conquest of the universe, and yet man seems to ignore the fact that on this very planet there are still people living in the stone age and practicing cannibalism."
Added By: Clint_Olson
Alan Yates: "[Faye, Alan's fiance, is being carried away by the Yanomanos] Faye! Faye!"
Mark Tomasso: "[Simultaneously screaming at each other] Did you see it, Alan? She's had it! We gotta think of ourselves!"
Alan Yates: "No! We gotta get her outta there! I want to save her!"
Mark Tomasso: "We gotta get the film back home, Alan!"
Alan Yates: "I wanna save her!"
Mark Tomasso: "Think of the film, Alan, think of the film!"
Alan Yates: "I don't give a shit about it! [cuts away]"
Added By: Clint_Olson
Chaco Losojos: "In there, the more you carry, the quicker you get tired, the sooner you die."
Added By: Clint_Olson
3rd Executive: "[while having lunch with Professor Monroe in Central Park] You must admit, it's exceptional footage. I - I didn't expect such impact, such authenticity!"
Professor Harold Monroe: "I don't know. I don't think exceptional's the right word."
3rd Executive: "You don't?"
Professor Harold Monroe: "No. I mean, what's exceptional about a primitive tribe like the Yacumo being... terrorized, and forced into doing something they don't... they don't normally do?"
3rd Executive: "Come on, Professor! Let's be realistic. Who knows anything about the Yacumo civilization? Today, people want sensationalism. The more you rape their senses, the happier they are."
Professor Harold Monroe: "Ah, yes, that's typical Western thought. Civilised, isn't it? That's what Alan thought and that's why he's dead. The Yacumo Indian is a primitive, and he has to be respected as such. You know, did you ever think of the Yacumo point of view, that we might be the ones who are savages?"
3rd Executive: "[chuckles] Well, I've never thought of it that way; but it's an interesting idea."
Professor Harold Monroe: "Yes. Let's say things were reversed, right? And the Yacumo attacked your house, defiled everything that you held holy. You know that pig that was killed? That was food for those people. Now, what'd happen if somebody went to your house when you were hungry, and... and took a little bit of food that you had in the refrigerator, and threw it down the toilet? Would you behave in a civilised way? [the Executive ponders this for some time] Would you like people to make money off your misery?"
Added By: Clint_Olson
Mark Tomasso: "[the group come across the impaled girl. Close-up of Alan smiling at the scene while Faye glares at him; off camera] Watch it, Alan, I'm shooting."
Alan Yates: "[feigns shock] Oh, good Lord! It's unbelievable. It's... it's horrible. I can't understand the reason for such cruelty. It must have something to do with some obscure sexual rite or with the almost profound respect these primitives have for virginity."
Added By: Clint_Olson
Professor Harold Monroe: "I wonder who the real cannibals are."
Added By: Clint_Olson
Are you sure you want to delete this movie?
Locate The Duplicate Entry For Cannibal Holocaust 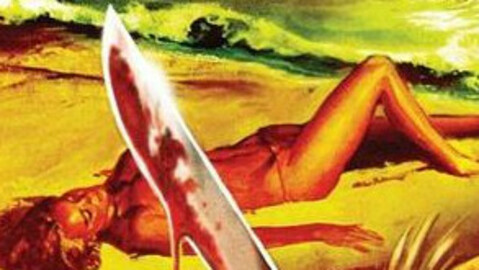