My take on the Italian Cannibal movies, reader discretion advised
By Hazer_Synn
On
A lot of people hate them for having animal killings for dramatic purposes, some hate them for their mysogynistic themes and treatment of female characters. Some even hate them for their often over the top violence and gore. But not me, for me they are the cinematic equivalent of a good orgasm, over blown,
sometimes over dramatized and in the end extremely satisfying, making me want more. For those whom are faint of heart, squeamish, and/or closed minded, thanks for checking this out and all but stop here. I am taking you from here to the emerald inferno, the more exploitive side of the late 70's and 80's cinema... The Italian Cannibal sub genre.

My first excursion into this genre was quite by accident, it was the early 2000's and I was in need of something a litte harder violence wise then say Friday The 13th or Halloween. For me violence in film is almost like a drug, it is an addiction of sorts, I guess you could say. So on a fateful day, with a litte more money than brains at the moment, I ventured to Cheapies, a downtown record and video store. Searching through the DVD's I came upon something I had never seen before, in all it's fake blood soaked glory, The Grindhouse Release of Cannibal Ferox. The warning on the cover edged well into my psyche, Banned in 31 countries. This is it, the next level I was craving. After some martial dispute over the price, a very hefty $49.99, I finally was able to buy it. Soon I was home and off into a whole new level of horror. The beginning of what has now become my favorite genre of all time. 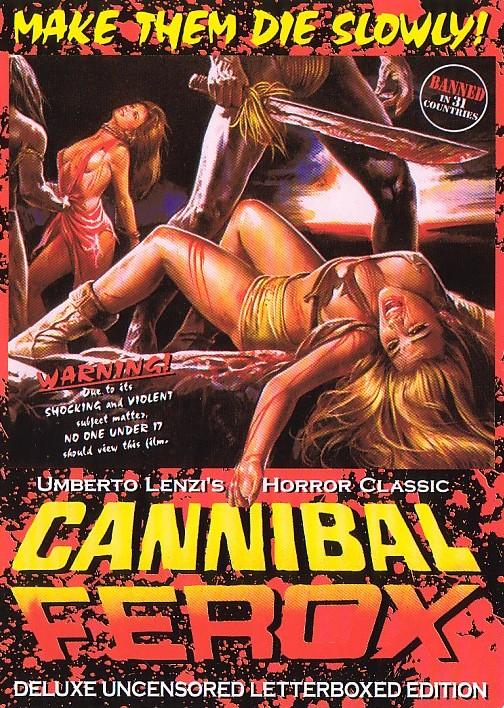 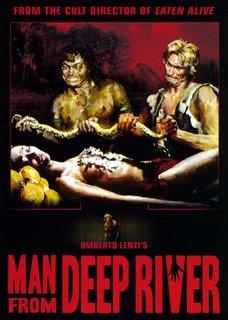 The Man from Deep River was released in 1972, inspired by both the Mondo Cane series and A Man Called Horse,
it followed a journalist from his assignment to photograph Thailands widerness, to an accidental killing and finally being captured by a local tribe of savages. I will not give away the story in anyway, but there is
several torture and a few gory scenes, the very beautiful Me Me Lai in various states of undress and some random real life animal killings. Since it is the 1st of the genre it is understandably less violent but
still is a very likeable movie. It was not a huge success financially but was the inspiration for the future. 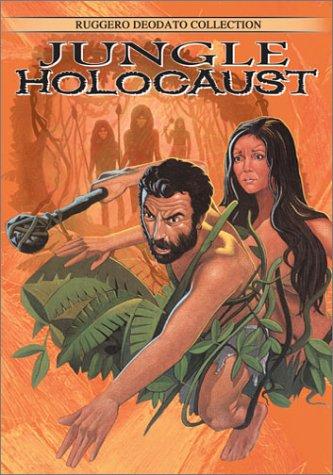 The first successful film of the genre was the 2nd major release, by Ruggero Deodato, in 1977, Ultimo Mondo
Cannibal or the english title Jungle Holocaust. Again this feature Me Me Lei and as well stared Ivan
Rassimov, and again has been clearly influenced by Mondo Cane. This one though, is more like a survival movie then a horror. It is about a rich American, whom is in search of further oil prospects, whom crash lands in a rain forest near the Philippines. After being separated from his party, he is captured and tortured by a cave dwelling tribe, who are apparently the last cannibal society in the world. This movie for me is the weakest of the genre, is not very gory and drags in places alot but was Deodatos first effort and again some Me Me Lai nudity is always a plus. But Deodato would have his day a few years later, with the most infamous of the entire genre. 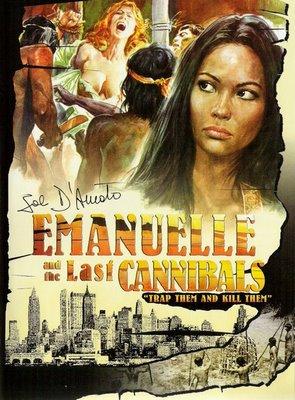 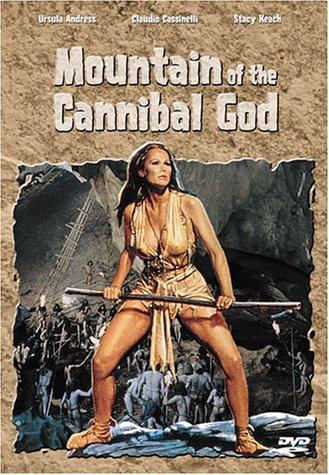 1978 brought Mountain of The Cannibal God, which had 2 legit actors from the time Stacy Keach and Ursula
Andress. It also brings animal killing back to the genre, with real life scenes of a lizard being gutted, a live monkey being eaten by a python. Again there is a lot of nudity and some fairly good gore scenes. This one is about a woman whom is attempting to track down her missing husband, whom was studying Amazonian tribes. Of course she and her party are soon captured and torture and mayhem ensue. For me this is one of the weaker movies, but still better than Jungle Holocaust. 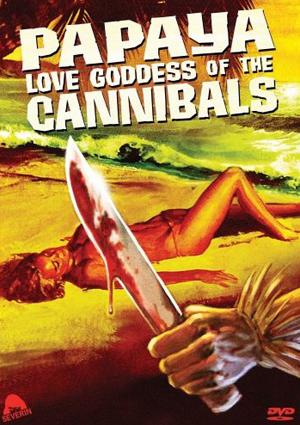 Also released in 1978 was Papaya: love goddess of the Cannibals but for time sakes and well the fact that it
is dull and in my opinion, irrelevant to the genre.There is no animal killing, very little violence, and a woman whom has sex with virtually everyone. 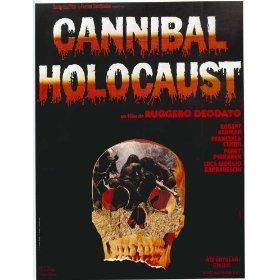 1980 was the begininng of the more extreme titles of the genre. The birth of a film with a huge amount of
infamy, in both Italy itself and the world. It's influence is clear in The Blair Witch Projects style, although never acknowledged. In 1980, Deodato returned, with the movie that made him known ...Cannibal Holocaust. Cannibal Holocaust starts as an apparent documentary about a film crew and their expedition into the Amazon, but whom have vanished. The movie essentially is shot as 2 films in one, the main film about the Professor whom finds the films, and then the footage themselves. Through viewing the footage, you discover how this award winning documentary team really got such violent and extreme shots and their fate as well. The footage has a more realistic shot style since most of it was shot on handhelds. As part of a gimmick to hype the film, Deodato had the cast sign contracts to disappear from all media for one year, in order to keep the facade that the footage was real. Due to some realistic looking gore scenes, one in particular of an impaled woman, some real life footage of real human executions, in the clips of the teams first film "The Last Road to Hell", the killing of a muskrat, a very large turtle, a snake, pig and monkey added to the overt sexual violence, the movie was seized and Deodato was forced to prove the movie was fake. Eventually he was cleared of the murder charges but the film was banned. Cannibal Holocaust is definitely an experience and even has several youtube videos showing people before they watch it and their reactions after. It is irresponsible, hauntingly beautiful, brutal and hateful but a master piece. It is a must see if you can handle it, however for me is the third best of the sub-genre.

So with that being said, what is my favorite of the sub-genre?

1980 also brought Lenzi's return, with Eaten Alive. Eaten Alive is about a woman searching for her sister,
whom was lured off into the rainforest but Jonah, a self proclaimed messiah, whom is very inspired by Rev Jim
Jones and his Jonestown cult. Along the way she meets a bad ass Viet Nam vet, and Me Me Lai, and they
eventually catch up with her brainwashed sister after encountering a tribe of cannibals. There is alot of
great gore scenes, although a lot of them are from previous Cannibal movies and editted in, as are the animal killing scenes. The story is what drew me and made this my #1 of the entire genre.

And finally back to where I started, I shall end...
In 1981, Cannibal Ferox finally made its debut, claiming to be the most violent movie ever made. Also titled
Make Them Die Slowly, it follows a student attempting to disprove the cannibal mythos, she hypothesises it is
a creation of colonialist racism and ventures into the jungle, where her party encounter two apparent emerald
smugglers whom claim to have been attacked by a savage tribe. There is plenty of violent scenes, that look great and are sometimes even innovative, animal killing again, but mostly reused footage and a really good theme music. Although the story, for me is not as strong as Eaten Alive, It looks much better. I actually
prefer this to Cannibal Holocaust. 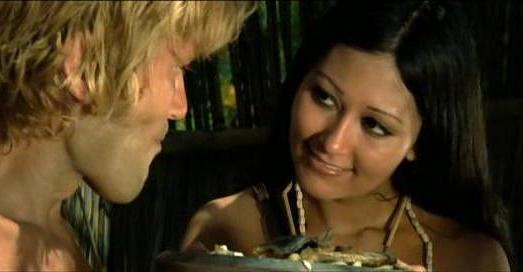 There are a few other notable entries in the sub genre, but these are the best known and the best.

Animal killings, sexual violence, heavy gore, harsh real jungle environments.. Things we may never experience
again in film, and sure you may not agree with their methods, hell I don't totally myself, but there is no
doubt they deserve a place in film history, if not for anything else but to remind us of irresponsible measure
some will take to make money.
9
Login To Vote!
More Articles From Hazer_Synn 13
Quote O' Matic
Double Trouble: "We're doin' the Jailhouse Rock, but it just isn't a party without Carmen Sandiego. You'll find her in Asia."
Where in the World Is Carmen Sandiego?