In this made for TV follow-up to the Tom Hanks/Daryl Hannah blockbuster SPLASH, Todd Waring (THE RETURN OF THE SHAGGY DOG) and Amy Yasbeck (PROBLEM CHILD, "Wings") take over the roles of Allen and Madison. The pair return from the sea and try to start a new life in suburbia, but when Madison catches wind that Allen's new boss is using dolphins for experimentation, she sets out to free the animals. The film originally aired over two weeks on ABC's "Disney Sunday Movie." The only cast member who returned from the first film was Dody Goodman, who reprised her role of loopy secretary Mrs. Stimler. Are you sure you want to delete this movie?
Locate The Duplicate Entry For Splash, Too

4
Quote O' Matic
Duo Maxwell: "Duo Maxwell. I may run and hide, but I never tell a lie. That's me in a nutshell! -Duo Maxwell"
Mobile Suit Gundam Wing 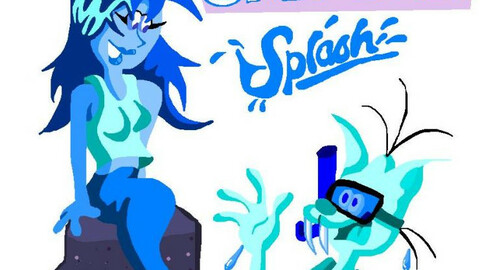 Creating a Mermaid for Splash

Splash '89 at the Riviera Hotel & Casino

New! V8 Splash in My Princess

V8 Splash in You're Hot