A recounting of my favorite childhood show: "The Adventures of Pete & Pete."
By DancePetunia
On
"Hey smilin' strange
You're looking happily deranged
Are you gonna shoot me?
Or have you picked your target, yet?
Hey, Sandy
Does your dog bite?
Hey, Sandy." 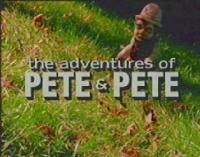 Ahh... Polaris. What a weird song to go with such a wonderfully weird show. The Adventures of Pete & Pete was one-of-a-kind, with such an odd surrealism, that, while watching it, you knew you were watching something that could never be re-created. Some people have described it as "The Wonder Years on acid" which, I can totally see.

So many outrageous things happened in Wellsville. There was a mysterious payphone that never stopped ringing, an ice cream man no one had seen without his costume, a rebellion against Algebra in the High School, a dodgeball war... and the great thing is, is that, like in real life, the mysteries weren't always solved.

The Adventures of Pete & Pete had some great characters. Of course there was Big Pete, our narrorator to the odd world of Wellsville, USA. Always extremely deadpan, and pretty normal, he didn't seem to notice what strange life he was leading. I mean, he almost died on a bus to a Milk Museum, had a bowling ball come between him and his brother, wore a bear suit while being pummeled with golf balls, and worked on a Secret Project for his one-handed shop teacher.

And, of course, there was Pete's little brother, Pete. Little Pete had a very rebellious nature and always "dared to be different." Little Pete had a strange facsination with power, and, for his first New Year's Resolution, he vowed to change the world. He also had a radio station (WART Radio), a love for scabs, two tattoos, and once he drained out Lake Superior. Here he is below, literally, "drying out his tongue in protest."

Pete & Pete's mom and dad (Judy and Don) were also great characters. Don was your stereotypical dad who loved his lawn, enjoyed fishing, took pride in "making good time on the road," and wanted to be his sons' hero. He also had deep respect and admiration for the Hoover Dam and once found a car buried at the beach. Judy was a sweet mother who had a metal plate in her head.

Pete & Pete had some pretty cool sidekicks. Big Pete's included: Ellen, Pete's friend who was a girl, but not a girlfriend, Bill Korn (who was obnoixous), and Teddy (who was nerdy and narotic). Little Pete had Clem (who would randomly grow facial hair), Monica (a Kreb Scout), Wayne the Pain, and Nona F. Mecklenberg... "F" stood for "Forklift," and her father was a suburban Iggy Pop. There was also my favorite Pete & Pete character Bus Driver: Stu Benedict. He was manic depressive, and possiblely sucidal, because his girlfriend Sally Knorp broke his poor, little heart. He had a master plan to tattoo Sally's name to his forehead, strap himself to an iceberg, and slowly drift off to sea...

Pete & Pete also had some fantastic villians on the show. There was Endless Mike, Pit Stain, Open-Face (a mutant who always ate open-faced sandwiches), Gravy Breath, and, my personal favorite, Papercut. He was a kid who was born in a copy place, and had no one to play with... but he did have paper. He became an oragami expert and made weapons out of paper. The coolest were the orgami Chinese Throwing Stars. They were pretty kick ass.

But the oddest of all the Pete & Pete characters would have to be Artie, The Strongest Man... In The World.

Artie was Little Pete's own personal superhero and best friend. Artie had super stregnth and, also, super sight. He saved Pete from a visicous dog, defeated a mind-controlling bowling ball, and helped Pete beat up the Atlantic Ocean. They were very close. Artie lived in a Porta-John, loved the smell of tire air, and, also, liked the sound of arm pit farts, because it reminded him of his mother. But... unfortuneately all things must come to and end, and in the second season of the show Artie left, saying Pete was older now, and didn't need him anymore. It was time for Pete to be his own hero. 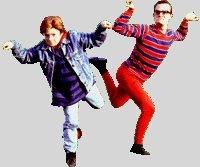 13
DancePetunia
Green Ranger: Friend or Foe?
A story about my friend losing his childhood innocence.

4
DancePetunia
Where Is Steve Guttenberg?
Me wondering what became of my favorite actor at the age of ten. 30
Quote O' Matic
Bill: "(Bill walks in and see Tim unconscious on the floor) What's a matter with him than?"
Grame: "I killed him!"
Bill: "You are careless, you really are! Honestly!"
The Goodies