In search of "retrojunk" at local flea markets.....yeah.
By Jason43
On 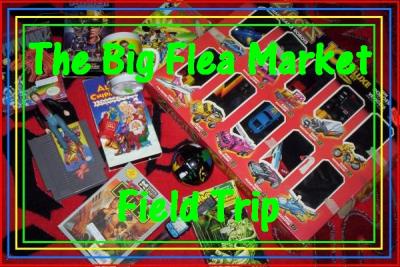 Anyone who’s ever read any of my previous articles knows I’m a sucker for 80's memorabilia, whether it be toys, videos, games or whatever. I just love collecting me all kinds of 80's crap. Collecting really isn't the word for it I guess. Hoarding's probably more like it. So for the compulsive retro hoarder like myself, there's no better place to feed the monkey than the local flea market. Yeah, there’s ebay and the good old fashioned yard sale, but anyone experienced with ebay knows how it feels to fight off other bidders only to be raped on shipping charges and God knows how long you’ll drive around looking for that one yard sale that has the big pay off. And if it rains, the whole day of yard sale surfing is ruined. So a while back, when faced with a rainy day off from work, I decided to make a day of it at the local flea markets. Armed only with petty cash in my wallet and a cell phone camera, I went to town. So what did I find on this little adventure spanning two states and three counties? Did I drive home empty handed, or with a trunk full of 80’s goodness? I haven’t felt this much anticipation since they opened up Capone’s vault. So here go the results… 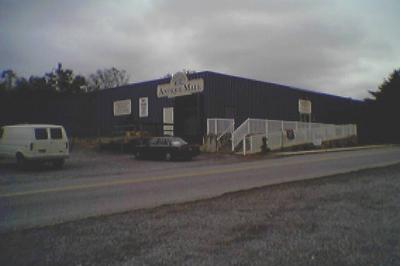 Hancock Antique Mall and Flea market, Hancock MD:
Now, there are five things that you can always count on finding in a flea market: knives/swords, cheap tools, assorted NASCAR crap, crafts/candles and old vhs tapes. I always pass right over the first four as fast as possible. They waste my time and I hate them for it. But then there’s the fifth flea market standard: old vhs tapes and this place never fails to please in this aspect. Whenever I visit, I make sure I leave with at least one old, obscure video, whether its something I want to see or not. So what tapes did I find this time? I’ll tell you in a second. This is actually one of the more upscale places I’ve visited. Not that it’s actually a nice place or anything, it’s just that the flea markets that have “antique mall” thrown in the title tend to be slightly less shitty. I‘ve had some luck here in the past. I found a boxed Lazer Tag set for two bucks and a boxed first series Zoid for a buck the last time I was here, so as you can expect I had high hopes when I walked through the door. 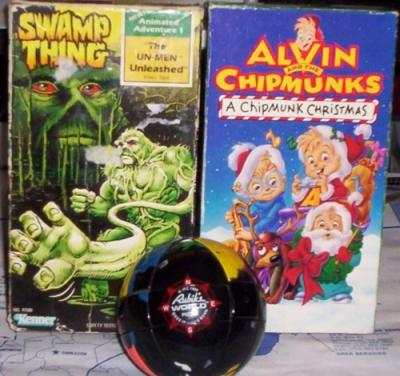 The Booty:
Well, not all that I had hoped for, but not that bad either. I didn’t really want the Swamp Thing cartoon, or the Chipmunks Christmas special, but like I said, I can’t leave empty handed. I found the Rubik’s World puzzle on the antique side of the place with a whopping $16 price tag. Luckily, the woman who ran the booth was there and after laying on the charm, she marked it down to $8. At least I think she owned the booth. You don’t ask questions at that point. They did have an old school Snoopy Snow cone maker for $1.50, but I passed because it was missing the shovel and the little snowman squeezy bottle. I can't pour super strength Flavor-aide on my snow cone without that little squeezy guy. Total spent: $12 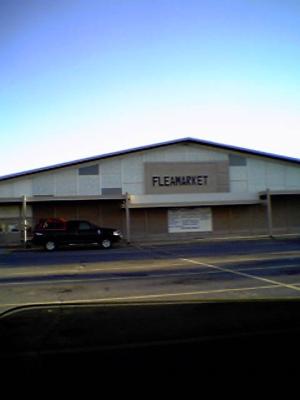 Berkeley Plaza Flea Market, Martinsburg WV:
The ol’ BPFM is by far the nastiest place on the list. You can feel the funk in the air when you walk in and it’s not the kind you dance to. A bare concrete floor, water dripping through the leaky roof and extremely shady looking people in every aisle…THIS is a flea market. I’ve never found much here, but for some reason I always come back every now and then. Maybe because it’s the only real flea market in my hometown and I’m hoping this will be the one with the big score. If memory serves, the only thing I’ve ever really found here was an old, old Crossfire board game. Not the really cool 80’s version, but the semi-cool 70’s version and the only reason I picked that up was because is was dirt cheap. So what’d I find? 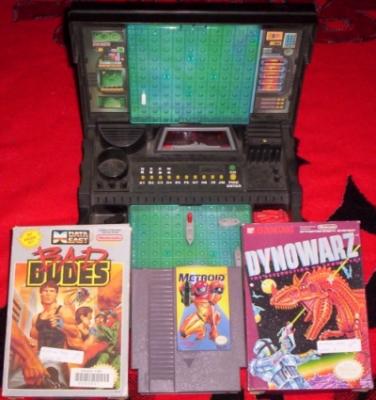 The Booty:
Three NES games and an Electronic Battleship. Not bad. Not bad at all. The old dive of a dirt mall actually came through this time. The boxed Dino Riders and Bad Dudes games were only $2.50 each. Metroid and Battleship were even less. Jesus loves non-ebay savvy flea market vendors. Total spent: $9 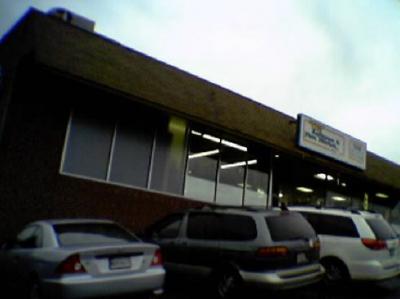 Dual Highway Antique Mall and Flea Market, Hagerstown MD:
This is another one I always try to hit, but have rarely walked away with anything good. The majority of the stuff in here is artsy, crafty, made to look antique little knick-knack thingies crafted by housewives with way too much time on their hands. That’s about the best I can describe the “country” garbage that has overrun this place. It does have one good quality and that’s the one legitimate vintage toy vendor in the place. He’s got some really great items, ranging from vintage boxed Star Wars toys, He-Man and GI Joe to stuff like 70’s-80’s board games and story books. And while he has tons of great stuff, he also seems to know his stuff, meaning said stuff is outrageously expensive. Jesus doesn’t love the ebay savvy flea market vendor. In the end, this guy single handedly takes the fun out of my visits to this place. Half of the experience is finding old stuff for dirt. If I want to get raped. I’ll get raped on the Internet, thank you. And the damage… 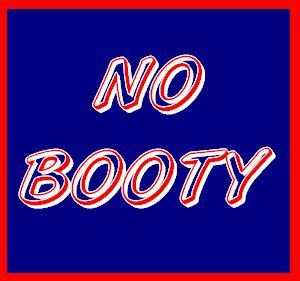 The Booty:
No booty. All of the 80’s goodies were in the guy’s booth with outrageous prices on them. If there was anything worth buying from any of the other vendors, this guy undoubtedly grabbed it and marked it up 500%. And I can’t help but to feel guilty walking away empty handed, but I just couldn’t dish out the cash this guy wanted. Curse you overpriced flea market guy…curse you. Total spent: $0 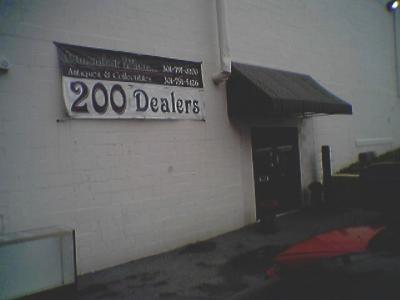 Memory Lane Flea Market, Hagerstown MD:
This is probably my favorite of the bunch. It’s small, dirty and unorganized, but I usually find something good there. The place is a mess. It’s not the worst I’ve seen in terms of cleanliness, it’s that everything is just thrown on the shelves and many times on the floors. You literally have to dig to find anything. It’s the K-Mart of the local flea markets. I really would expect more from it too, since it’s in the basement of a pretty nice antique mall, but as long they keep it stocked with great crap, I’m happy. I found the best items out of all the stops on my list at this one, although they almost lost the sale. I had spent most of my cash at the other places and had to use my debit card. But, my order was under $20 and the old lady at the counter felt the need to give me grief for paying for such a small order with plastic. I don’t need that. Despite the flea market cashier looking down her nose at me, I managed to come away with the best haul for the day… 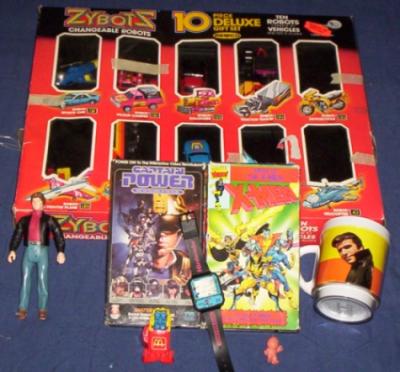 The Booty:
Look at it all. I hit the mother load here. I’ll start with the videos. First, we have two episodes of Captain Power, the old live action show that interacted with the toys of the same name. Second, we have Pryde of the X-Men, the pilot for the 80’s animated X-Men series that never was. Good stuff. Moving on, no home is complete without a David Hasselhoff figure. I can now say I have a little plastic Michael Knight gracing my shelves. Then, there’s the Nintendo Super Mario Brothers watch. I almost passed on it since it probably doesn’t work, but went ahead and dished out the five bucks they wanted for it. Sometimes I just gotta splurge. After that, there’s the largest find of the day, the Zybots gift set. Zybots were the typical cheap, Transformers knockoff and they are represented here in all they’re plastic glory. The set is complete except for one figure, but they made up for it by hiding a one armed McDonalds French fries Transformer and a one of those little M.U.S.C.L.E. guys in the box. That made the whole day worth it right there. And last, there’s what may be the new centerpiece of my whole collection, “The Fonz” plastic mug. What a sweet way drink your Sunny D in the morning. I’m not quite sure if I can ever bring myself to drink from a 30-year-old flea market mug, but if anything is going to change my mind, this is it. Total spent: $18. The mug alone was worth that in my book. Heeeey!!! 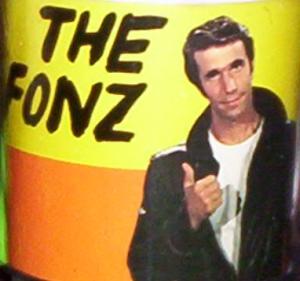 And with that, my day of flea market hopping is complete. On a side note, I went to the local Goodwill the next day and found a boxed Radio Shack Armatron and two boxed Phaser Force sets all for 10 bucks. 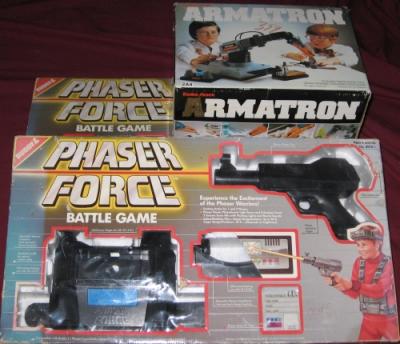 I didn’t really want either of them, but I had the Phaser Force/Lazer Tag rip-off set when I was a kid and couldn’t pass them up. And the Armatron is just damn cool considering it’s a plastic arm and it should come in handy if I ever have to handle plutonium or other dangerous materials. Anyways, make sure you get out and check those flea markets; you never know what you’ll find. Just stay away from the ones in my area. That’s my turf.
3
Login To Vote!
More Articles From Jason43

7
Quote O' Matic
Takato: "How could you? How could you do this horrible thing?! I'll make you hurt...I'LL MAKE YOU PAY!! -Takato"
Added By: System
Digimon: Digital Monsters
Related Articles