Life Ain't Easy on the Oregon Trail
By MelloMovieReview
On
You remember computer class in the early to mid-90s right? It was all “put your hands on the keyboard this way” and “we are going to learn typing skills” and “This is an application” … yeah right! Our generation learned how to use the computer by going on a pioneer adventure on the old west. That’s right boys and girls, saddle up the oxen, cover the wagon, gather your bullets and wagon tongues! We are about to embark on an Epic journey that would put Lewis and Clark to shame! It’s the ‘Oregon Trail’. 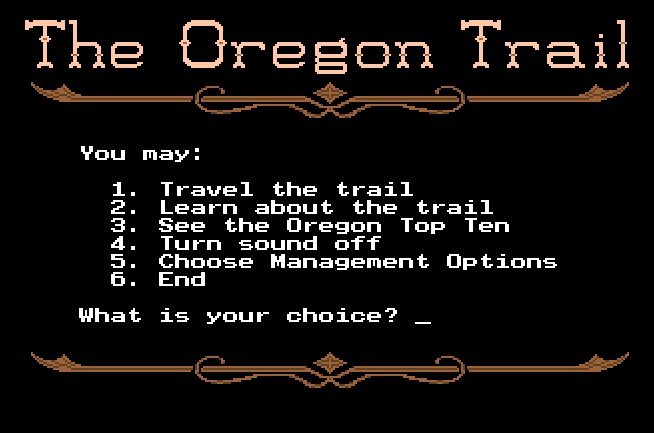 Want to travel the trail? y/n?

One of my first computer memories came from my school. We couldn’t afford a personal computer for our home in 1993. Our school had just transitioned from Apple II to Windows 3.1 version. I remember specifically because in Kindergarten and 1st grade we used Apple II and played “Lemonade Stand”. Shouldn’t we have used these computers to, I don’t know, learn how to type or format a floppy disc? No way, they are just kids. Pop in Lemonade Stand and let them figure it out. Sink or swim, but hey, we figured it out didn’t we? I’m sure Mark Zuckerberg was once a kid selling 8-bit lemonade on an Apple II at some point. 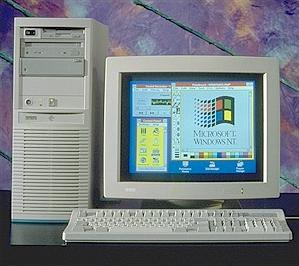 This was pretty close to what we used in second to fifth grade at my school.

Anyway, we aren’t here to talk about that. We are here to pay homage to the most iconic game ever put on a floppy disk, ‘The Oregon Trail’. 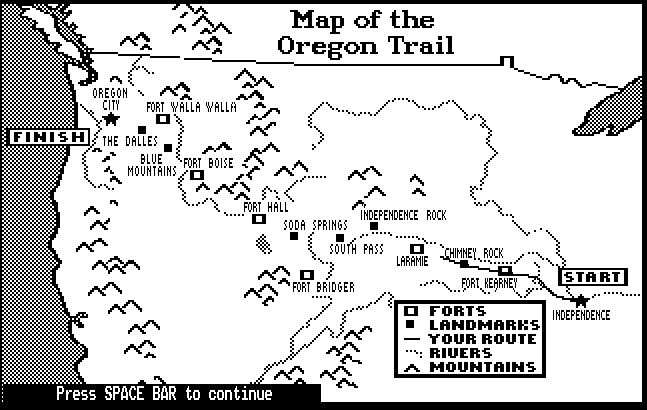 This is the iconic map that will turn novice computer users into pros.

Every kid who went to school between 1986 and 2000 probably remember playing ‘The Oregon Trail’. It was in developed in 1971 by by Don Rawitsch, Bill Heinemann, and Paul Dillenberger and produced by MECC. It played on Apple II and Windows DOS. It was branded an ‘educational’ game to teach children the woes and hard life of pioneers in the old west. The game is unique in the sense that it’s very addictive and fun for some unexplainable reason. It’s an 8 bit wagon game about a farmer, carpenter, or banker traveling with his family through Native American territory to settle in the west. It’s branded ‘educational’ and it’s a typing, reading game. It has all the ingredients for a snooze fest. However, it is still the most popular game made for computers in that era.

Let’s look at the design of this game. We have a simple y/n option with number choices. I love the screen where you decide to name your crew. We would always choose the names of friends and when they died, it was hilarious. “Hey everyone, Matt got Dysentery and pooped himself to death!” 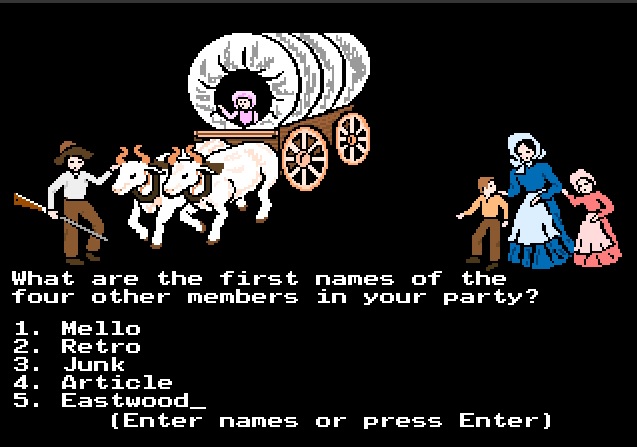 Yeah, just look at those graphics.
It looks like something I designed on Windows Paint.

One of the great features we had at our school was the game being connected to a network. That meant when you died and left an epitaph on your tombstone, other kids in your class could stumble across one and read it. We used to make the leader of our party the name of a kid we didn’t like and say something like “Here Lies Billy, I’m such a Loser” The name calling could get rough as we learned this skill later. I'd look at the screen, see a gravesite and say, "Okay, who said I was a dog licker? Seriously?" Followed by the roar of laughter.

You know you got excited when this random message popped up on you Computer Screen... 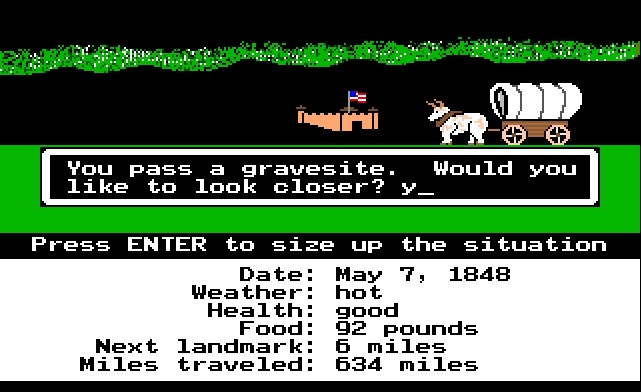 Heck yeah I'm choosing 'y'! What do you think? 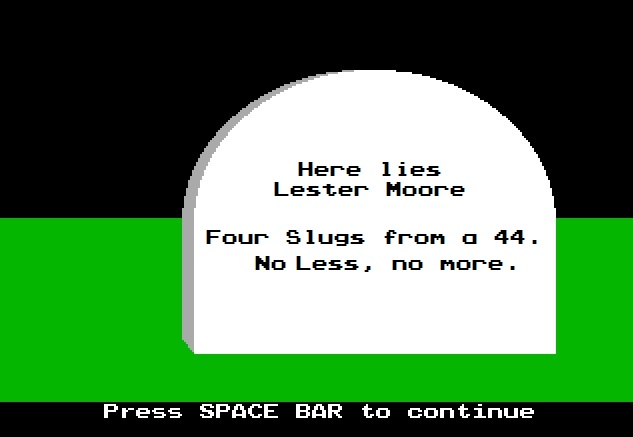 An example of a Tombstone. I thought a reference from the movie "Tombstone" (1993) was perfect.

Speaking of death, there were some crazy ways to die in the old west. I can’t help but think Seth MacFarlane got his idea for ‘A Million Ways to Die in the West” from this game. Here is a list of all the ways you can die.
1. Dysentery
2. Typhoid
3. Snakebite
4. Measles
5. Fever
6. Cholera
7. A Broken Leg
8. A Broken Arm
9. Drowning
10. And of course EXAUSTION

That’s right folks, you can die from exhaustion. What kind of pioneer setting out to settle some wild territory dies from ‘exhaustion’? Don’t look up these diseases on WebMD. They all pretty much end with you dying from diarrhea. Basically in the Old West, you died of intestinal infections. Could you imagine the wagon stink? I'm surprised 'fumes' isn't a cause of death. 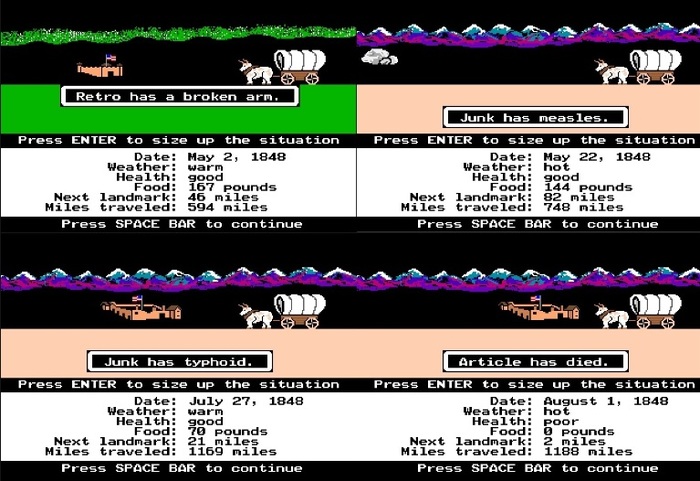 So to start, you have a choice between a Banker from Boston, a Carpenter from Ohio, or a Farmer from Illinois. If you chose a Banker, you get the lowest score because you can literally BUY anything you want. Seriously, you can pay for ferries, buy thousands of pounds of food, tons of sets of clothing, and all the spare parts you need. No need for skills. A carpenter is a little more advanced, but you haven’t played the REAL Oregon Trail until you choose a Farmer. My favorite way to play was choosing a farmer. Go ahead, use the banker. What use is a banker in the wilderness? 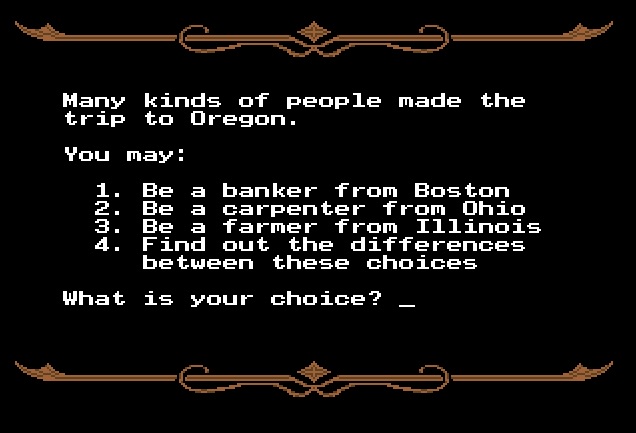 I’d go to Matt’s General Store and buy 3 spare parts for everything, 10 sets of clothes, pretty much everything he suggests EXCEPT food. Oh no, I’m not buying food. I stock up on 35 boxes of bullets and hunt. That leaves you with 20 dollars. All you need is a few dollars for a ferry later when the river is wide and deep.

Hunting was my favorite part of Oregon Trail. You have an Atari looking guy (looks more like 4 bits than 8) shooting Buffalo, Deer, Squirrels, or Rabbits. Later in the game you hunt bears as you pass through the mountains. My biggest gripe is that you can only carry 100 lbs of food back with you. Seriously? Why not make a few trips back and forth to your wagon? I killed 1,400 pounds of Buffalo and I only get 100 lbs? It’s not like that wagon can’t hold over 1,000 pounds of food! 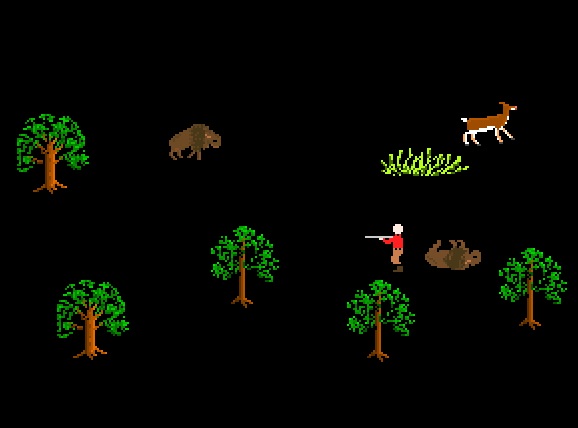 Look at all that wasted meat.
It's a shame four others in your party can't help you carry it back.
Seriously, does my 4-bit hunter have to do EVERYTHING himself? 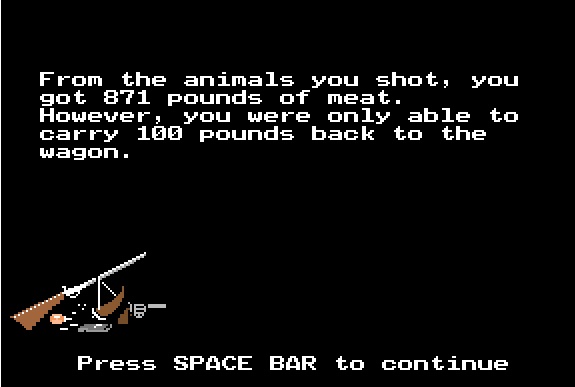 See what I mean?
The landmarks are hilarious. Would you like to view "The Snake River crossing"? y/n? ... I made it here without getting Typhoid, of course I want to see it. 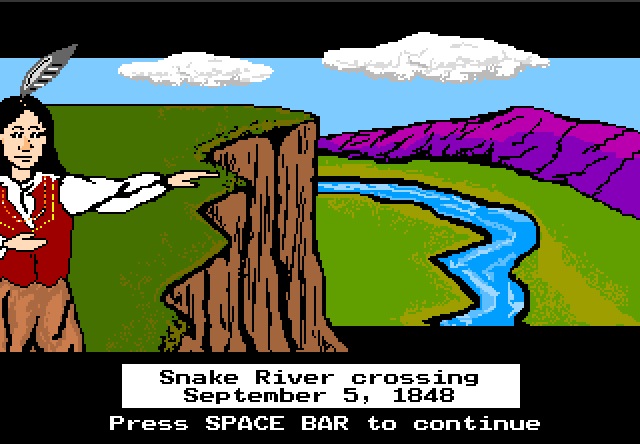 Some of the ‘talk to people’ choices are obviously before ‘politically correct’ became a term. It’s funny in the sense that it’s so innocent and naive. It’s not mean spirited, so feel free to laugh at the parts where Indians say “We only war with the other Indians, we have no problem with the White Man.” 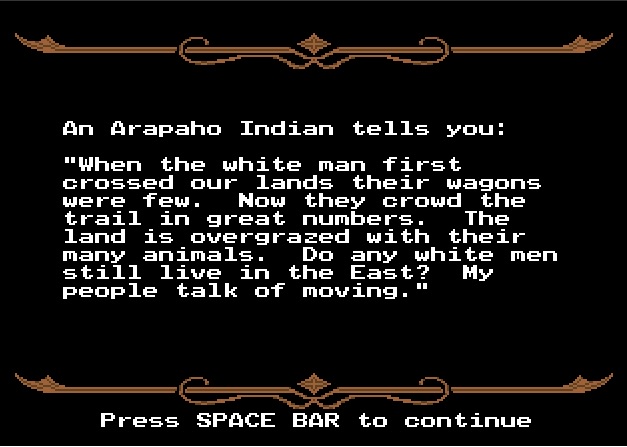 Some of the people give you advice in a not so subtle way, “My dad had a broken leg, we had to go at a slower pace for a few days until he got better.” This is how the game explains you should keep your party alive. The more people you keep alive, the more points you get. If you are a banker, you get the exact amount of points earned at the end. If you are a carpenter, it doubles your points, and if you are a farmer, it triples your points.

Here are some other examples of landmarks, in all their 8-bit glory! When you were a kid, it was exciting to live until the next place was discovered! 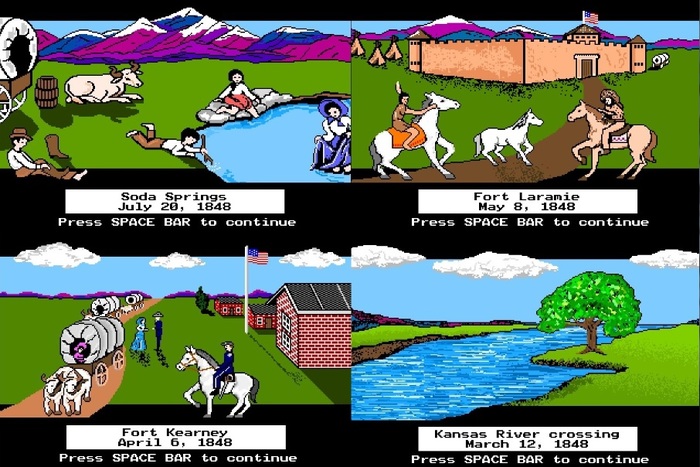 Even the Oxen look relaxed at Soda Springs. Though, I'm pretty sure something shady is going down at Ft. Laramie.

You cross a lot of rivers. I mean, geez Tom Sawyer and Huck Finn never saw so many streams of water. It's like Michael Bay made a Mark Twain novel into a movie/game. 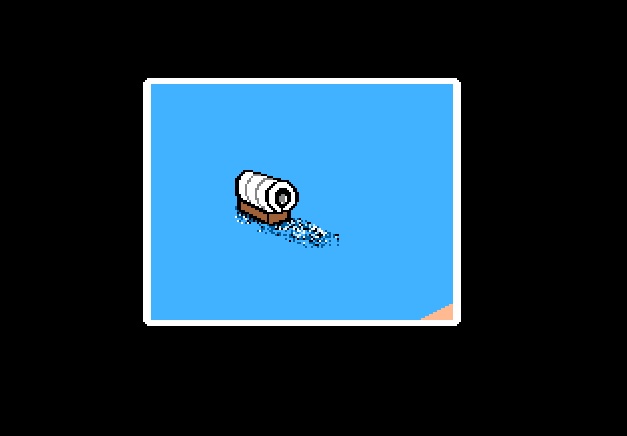 Just caulk it a float baby. Can't go wrong. By the way, where are my 6 Oxen?


Usually you have the choice to caulk and float the wagon or just walk across. Why chance walking across and someone drowning? Just caulk it and float. Sometimes you have to pay emigrant settlers for a ferry, or trade clothing with an Indian guide to help you cross.


Another thing I find funny is the random thieves that come in the middle of the night to take things. I have had a thief steal 25 bullets, and sometimes they take 8 sets of clothing. You need clothing in the winter months. Nothing grinded my nuggets more when I was a kid than having all five members of my party alive at ‘Blue Mountains’ (Which is right before the Dalles ending) and having a thief steal 8 sets of clothing in the middle of DECEMBER! Sure enough, two space bar taps later, and old Jacob is dead from Fever. I covet that HIGH SCORE. 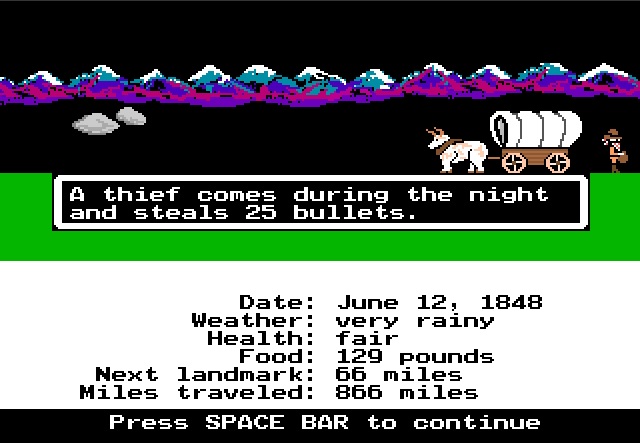 If enduring DISEASE, THIEVES, RIVER CROSSINGS, and FINGER CRAMPS weren't enough, then you have to worry about the WEATHER. 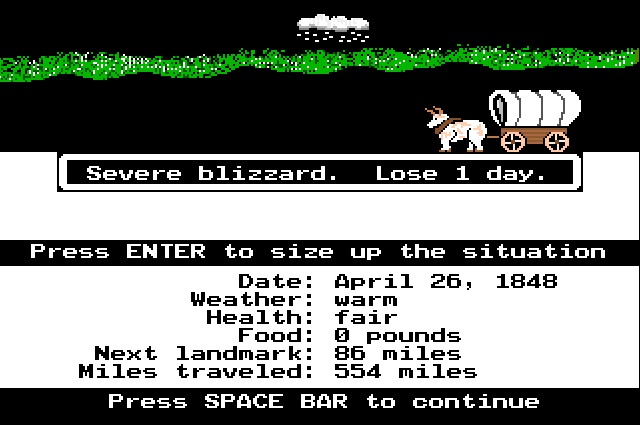 Seriously, a Blizzard on April 26th? Where are we?


Sometimes it's 'Very Hot' and you have 'Very Little Water'. Sometimes it's a blizzard. There is nothing worse than being less than 20 miles from your next landmark and it takes 10 clicks of your space bar to get there because you lose day after day due to blizzard. Oh, and don't get me started on 'lose trail, lose 3 days'. Seriously, you have a map and a beaten trail. How do you lose the trail?

I remember when I got to the "Dalles" for the first time. I probably got more excited that I should have. I never chose "Walla Walla" I don't know why. 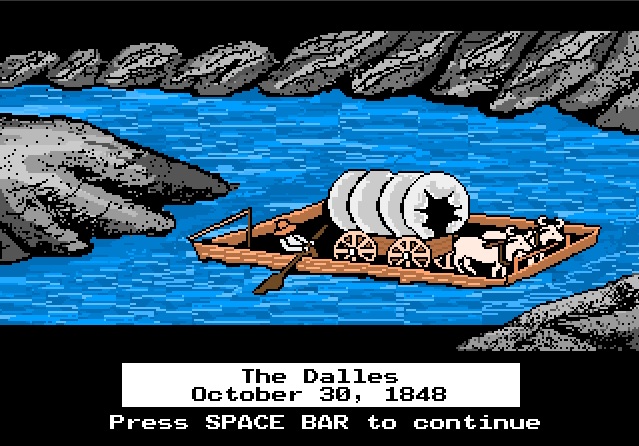 Oh boy, the Dalles. You know what time it is fool!

You know when you got to the end you floated down the Columbia River. Who took the toll road? The most exciting part of the game was making it to the river part and floating your raft to that exact location where you had to dock your raft. 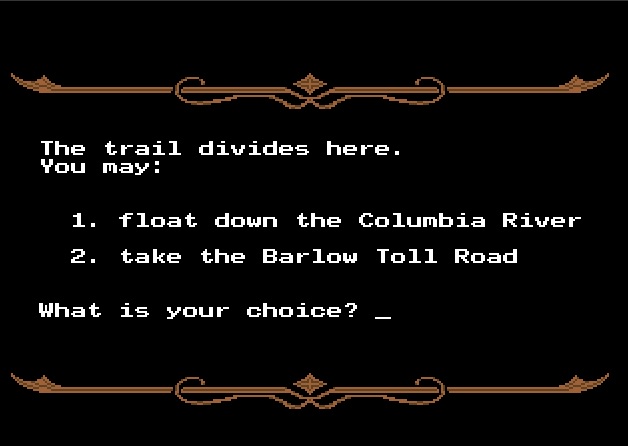 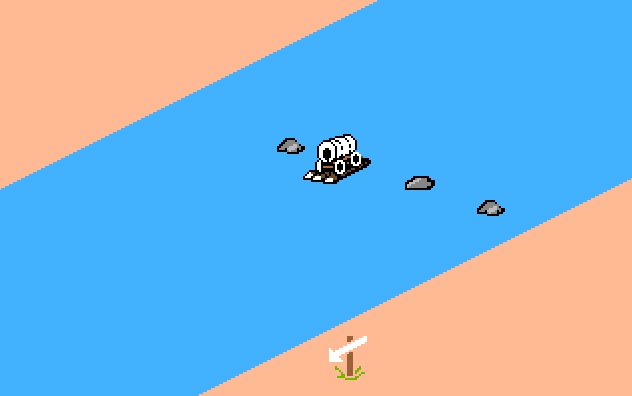 Don't hit a rock! I didn't come all this way to drown and lose all my items in 1 second.

Finally, we conquered the Oregon Trail. We can put our name in the Top Ten! We are etched in 8-bit history next to the likes of Lewis and Clark, the creators of the Transcontinental Railroad, and Leslie Edwards and Bartholomew Hunt. (Sorry, had to get an "Almost Heroes" reference in there). 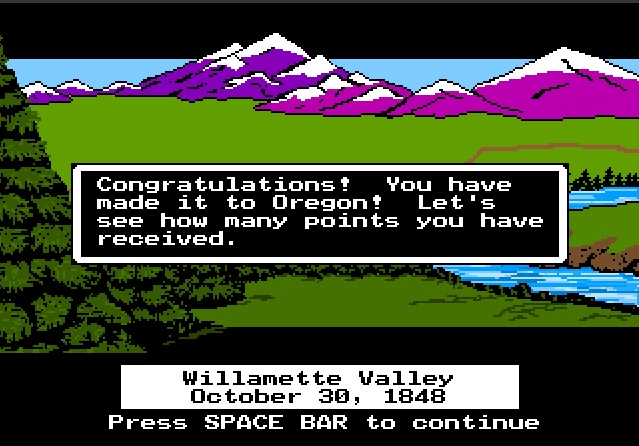 This is what you spent all those hours in Computer Class for, this moment. This screen. That MiDi music and 'congratulations'.


There you have it folks. Today we play 'Minecraft' or "World of Tanks" or whatever on a PC or MAC. Most people play games from the 'app' store. However, there was a time in the old days when conquering the wilderness of Fort Kearny or hunting bears outside of the Blue Mountains was all we had. Just like the history of America, we had to conquer the old west before we could pioneer into the likes of PC games we love today. This game not only taught us the woes of pioneers, but how to use a computer. For that, we salute you "The Oregon Trail".

The End
7
Login To Vote!
More Articles From MelloMovieReview