The overlooked heros of marvel

while were busy going crazy over spiderman we forget about these other hard working heroes
By BATTLESTAR100
On
spider man, the hulk ,thor ,daredevil ,and capatin america marvels great superheores with big movie deals, toys ,cartoons, hats, socks, underwear,and cereal these guys are the big ones marvels top money makers ask any kid (or adult) about them and thell now exactly who your talking about...but if your a comic fan like me you take time to appreciate the other guys that fit into the skin tight suits and risk there necks to keep us safe with little to no reward they are ...THE OVER LOOKED UNDERAPRECIATED HEROES OF MARVEL COMICS...

Now without further to do lets introduce our first hero 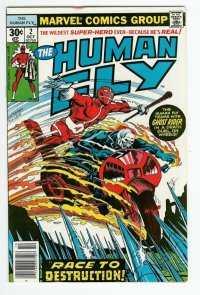 the human fly the most daring superhero of all because hes real!... real? well at least thats what the comics cover claimed. when i did some further reaserch on him i figured out the human fly was actually a real person who was from canada who did actuall stunts. there is a great deal of mystery surrounding the human fly. considering i could only find one web site in the internet that acctually proved his ecxistence.wikipedia didnt list him either. starnge but i did find a web site witha picture and an account of meeting the human fly ... 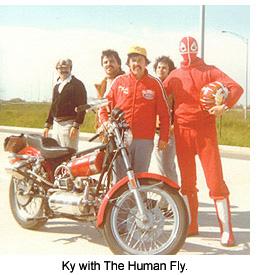 they siad that he would never took his mask on but reveld the human fly to be a canadian stunt man named rick rojjat.his name was never revealed in the comics but in issue 16 they showed a special page that featured the human fly at the marvel bullpen shaking hands with stan lee and the artsit and writter of his comic.he also had a guy with him in a wierd costume called lightning boy who was his "sidekick" no info on him on the web either now i found it sort of starnge that a carachter who stood on top of a commercial jetliner as it was taking of(yah he really did that!) 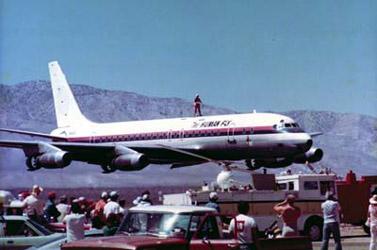 and wore a costume everywere and would not reveal his true identity is very starnge considering now one remembers him i would think more people would know who he was!and he would be more in the mainstream pop culture circle. in the human fly comic book it says that the human fly broke every bone in his body in a car accident and had them replaced with steel bones and able to do braeth taking stunts. though te steel bones part is incorrect rick rojjat actually did breack every bone in his body in a car crash.what happend to the human fly? by issue 20 or so he was canceld and never was heard from agian.
2.overlooked hero number two!
machine man! 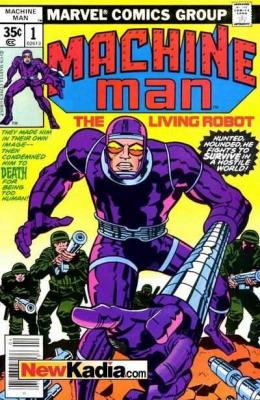 poor arron stack, confused...livivng in a world he does not undertsand.why? he is a robot, a robot created by jack kirby after his return to marvel in the mid 70s after trying his hand at dc comics. the position did not suit him well and he returnd to marvel and created many new heores... the eterrnals and more that has slipped my mind but one other was machime man.a purple robot drwn by jack kirby and written by him until about the tenth issue when steve ditko took over for art. arron stack lived a boring life other than his job at an inshurance company and annoying co worker errnie and being a crazy crime fighting robot i dont know why he never really took of after that his shortlived comic book except for guest star status...in the 90s he disapeared until now he is in nexwave agents of hate. and still doesnt get the respect a half human half robot "cyborg" should get. 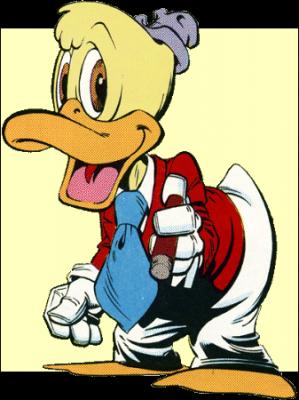 now i some of you will know that howard was originaly a marvel comics superhero but some of you will just recognize him from a movie and not know of his background in the comics field he first appered as a dream of the man thing in fear 19 in 1972 steve gerbers little joke around the office howard from an alternate reality were ducks rule but soon howard the duck got his own comic book.

which ran for ameasley run of a bout 30 issues before being cancelled.
THE MOVIE
one of the worst movies of all time (or so ive herd ive never acctually seen it my self)it proved that even high and mighty george lucas in his prime could produce a flop so big it would make movie fans cringe when ever they heard the name howard the duck.the movie was probobly essential to the ducks downfall.history of the howard the duck movie george lucas had always been a fan of marvel comics and loved howard and when an old college buddy of his wanted to put howard on the big screen lucas was in and threw a bunch of his indianna jhones and star wars money at the howard movie producing it with an iron fist! it was the first movie to have phone line to call into and get info on the movie it also had a giant billbord with a cigar coming out of an egg it was hugely anticipatted and when it finaly hit thaerters!...it raked in less than i made on a lemonadide stand(well more than that but you get my point) howard was shunned from popular culture and never quacked agian...why did the howard movie flop? simple howard was cute in the comics he was mean cinical and unimpolyed not a cute little duck in rock band... if howard new what they did to him in his movie hed cough up his feathers...one day soon there has been discussion of a new howard movie were howard will be computer animated and more to the roots of the comic book(and no making out with a human)though howard cant nessaceraily be billed(no pun intended) as a super hero he has accasionaly fought villans and had many jobs including running for presedint,learning kung fu and being a cab driver.

well thats it for the overlooked heores of marvel. if you liked it ill considermaking a part two theres a lot more heroes that need love to.
(and dont complain if my spelling isnt perfect give me a breack)
6
Login To Vote!
More Articles From BATTLESTAR100 17
Keiichi77
Great Video Games Based on Movies
Yes, they do exist!
An unhandled error has occurred. Reload Dismiss