A review at the retro EarthBound games.
By MoranisFan1991
On
In 1989, a Japanese celebrity by the name of Shigesato Itoi came up with a video game for the NES that satirized Dragon Quest. It was called MOTHER, named after a John Lennon song. 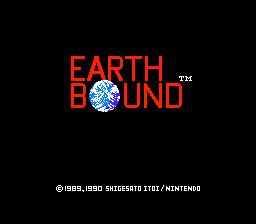 The game was translated and re-named Earth Bound in 1990, and was planned to come out in September 1991, but it never got to be released due to the SNES's rise in popularity, which is strange because all NES Mega Man games after Mega Man 3 got to have a North American release, and the over-priced NES failure Action 52 came out on the date that Earth Bound was intended to be released in.

However, near the end of the 1990's (!!!), Earth Bound did get to be converted into a ROM file available for download, with a title change to Earth Bound ZERO.

The Setting: America in 1988 (the exact year according to the Japanese version's prologue). 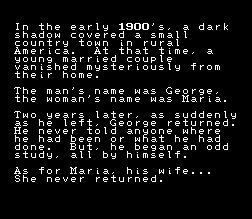 The Plot: In 1908, a young married couple by the name of George and Maria get abducted by aliens. George is taken to the ends of the universe, where he studies PSI and came back 2 years later. Maria, meanwhile, hasn't come back for some reason, adopts an alien infant named Gyiyg (pronounced "geeg" and called Giygas in the sequel) and raised him as if he was her own child. 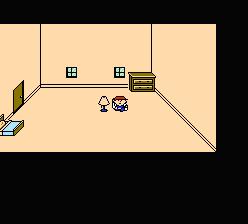 80 years after the alien invasion, a boy named Ninten finds his house under attack by a poltergeist, and after defeating the source, which was found in Mimmie's doll, Ninten discovers a melody. Not much later, he finds himself in another dimension called Magicant, where Queen Mary, the fair ruler of the fluffy cloud/seashell world asks Ninten to find 8 melodies throughout the United States. He's not alone, though; he's accompanied by a nerdy boy named Lloyd and a sweet girl named Ana. 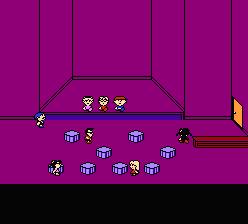 Pros: This game is probably one of the most nostalgic things you'll ever play. The music is nice, too. Is it any wonder why a Japanese magazine rated it #9 on the list of greatest Famicom (Japanese NES) games? 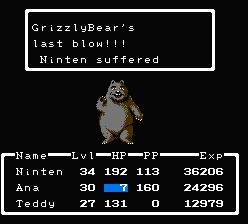 Cons: The level grinding. The worst example is near the end on Mt. Itoi (Holy Rolly Mountain in the Japanese version). My suggestion to make it fast is to kill nothing but Oh-Mooks until your party is at a decent level, but their PSI is troublesome. At least it's better than fighting Grizzly Bears and Titanians, which are hard due to their respective traits of Last Blow!!! and high defense with status effects that cause petrification and absent-minded-ness.

There's also this strange glitch where the game freezes while you fight a Hippie, an automobile, or a member of Teddy's gang. Why them specifically? Because they all have the same battle theme. Unfortunately, I don't have any screenshots of those for proof and I don't have the patience to wait for the glitch to show up, but it's mentioned in this link:

...
Bottom line, it's a great game, but like most NES games to my knowledge, it goes between fun and addictive to difficult and tedious. I am dead serious; the first time I played this game, it took me a month to beat it, mainly because of the the final area.
~~~~~~~~
The second game, MOTHER 2, officially called EarthBound in the United States, came out 5 years after the first game in Japan. Over in the Land of the Rising Sun, the sequel didn't sell as many copies as the original (over 400,000 for MOTHER and at least 280,000 for MOTHER 2), but it was an improvement from the first game, positively well-received, and a huge impact thanks to the Super Smash Bros. series.

However, this game is almost always the first game that fans have played, including me. 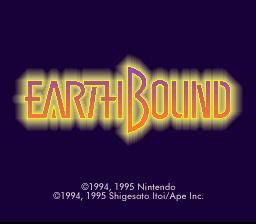 The Setting: Eagleland in 199X, most likely 1994, the year of its initial release. 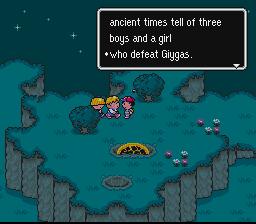 The Plot: One night, a meteor crashes into Onett, and a psychic boy named Ness checks it out. A creature named Buzz-Buzz comes out and tells Ness of a prophecy that Giygas will take over the world, and only he, two other boys, and a girl can stop him. The boys in question are geeky Jeff from Winters, Foggyland, and Poo, a young psychic prince from Dalaam in Chommo. The girl is Paula from the neighboring town of Twoson, who also has psychic powers. Ness also has to journey into his mind and memories, and the only way to do that is collect 8 melodies with the Sound Stone. 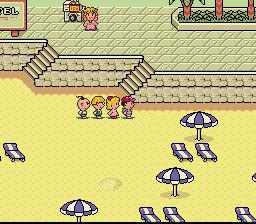 Pros: The game itself is quite addictive. Catchy and unforgettable music, wittier dialogue than the first game, and nice colors. Some features get updated such as the phone, where you can call both of your parents rather than just your father. 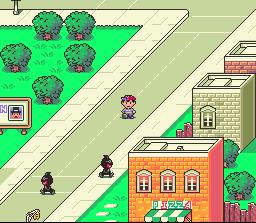 You can also see any enemies coming right for you unlike the first game where you just randomly run into a monster like most RPG games. 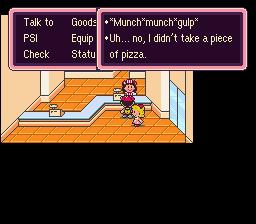 And, in my personal opinion for any other pros, you get to eat Pizza that you order over the phone in this game, and I really like pizza, despite that they cost between $48 and $238 in the game (that's insane!) 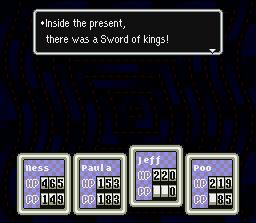 Cons: The 1/128 Item Drop system is a real pain. There are some nice items that enemies are holding that are to die for (no pun intended), such as the Sword of Kings (Poo's only weapon), the Star Pendant (the best Body armor in the game), and the Goddess Ribbon (Paula's best Other armor), but all that effort is really irritating, especially if the enemies manage to inflict major damage.

It really is an improvement from the first game. But, wow, can the A.I. in it be random!
~~~~~~~~
And that's the end of my review. And no, I'm not reviewing MOTHER 3; it came out 6 years too late to be reviewed on RetroJunk. But try out these other 2 games; they're quite addictive. See ya!
12
Login To Vote!
More Articles From MoranisFan1991 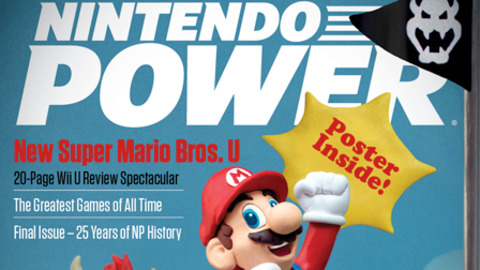 19
Nickstalgia
A belated RIP to Nintendo Power
A long overdue goodybe to my favorite childhood periodical.
An unhandled error has occurred. Reload Dismiss