A look back at the film and attraction that remains a great memory from my childhood.
By cgimovieman
On
It's 1986, Michael Jackson is in the absolute peak of his fame, cable TV and Nintendo are big deals, George Lucas and Steven Speilberg have made 2 of the 3 (soon to be 4, which I'm writing about as we speak) Indiana Jones films, and a new attraction is opening at Disney World's Epcot Center as well as Disneyland in California. 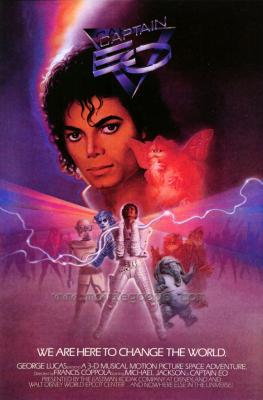 I'm speaking of course of Captain EO. A film and attraction that I think much of the world has now forgotten. Point of fact I had too until something sparked it in the back of my memory a few days ago. Up until now with the age of Google, YouTube, and just the internet in general, I think I had put to rest looking for remnants of the film after it left Epcot in 1994. But now you can find scattered bits of video from the film as well as the entire piece, in albeit low resolution, online. 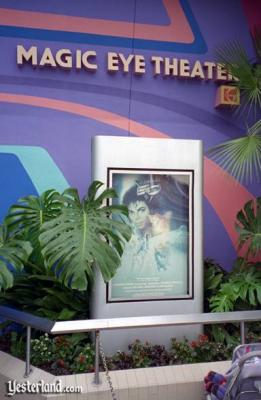 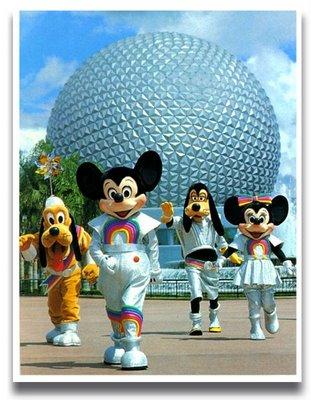 When Captain EO came out in September of 1986 I was 7 years old. I had barely ever been out of my home state of Michigan much less anywhere as incredibly cool as Disney World. So when my parents told my sister and I that we were going to take a vacation there in January of 1987...well, I was pretty much beside myself with excitement. To say the very least! Epcot was only a little over 4 years old when Captain EO premiered and still very much in it's prime as Disney's newest theme park. I think we can all relate to being at least a little of a Michael Jackson fan at the time. Michael has always been a bit strange, especially today in which he's downright looney, but I don't think anyone can deny that the man can sing and dance like no other. So of course I liked him at the time of our first trip to Disney that year. I can remember walking into the cue and waiting areas for EO. It was so exciting! I had never seen a 3D movie before and this was to be with Michael Jackson in a space epic. We went in, the lights dimmed and were given the standard pre-show speech by the Disney team member about our 3D glasses and that we weren't allowed to take pictures. It probably wasn't that cut and dry though. Probably something more like "taking pictures will jeopardize Captain EO's mission". You know Disney and the theme parks. Always have to keep things in the moment. 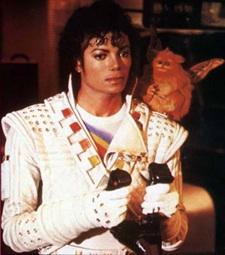 The film starts out in space as EO is flying off to a new set of coordinates after screwing up his last mission. He is accompanied by his strange crew of misfits. Hooter, an small elephant looking creature played by small person Tony Cox, who you might remember from more recent films like Bad Santa with Billy Bob Thornton. Major and Minor Domo are EO's two robot friends who later transform to help out. Then there's the sometimes annoying Muppet like character with three heads called Geex. And finally rounding out the crew is Fuzzball. A cut little character that plays more of a role as 3D treat than anything else. 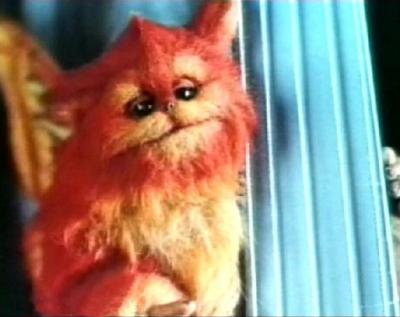 Captain EO's missions were too...well, it's a little vague on that, but basically to turn evil civilizations back to good through music. Yeah, it's a little corny and slightly gay I'll admit. But hey, when you think about it, no more so than a lot of musicals that are out today. So after getting his coordinates from command, the ship makes a crash landing. Somehow they manage to crash only inches from the beacon they were following. EO and the crew get out to explore only to immediately be captured by the evil forces of the planet and are taken into the evil queen's (called the Supreme Leader) chamber. After making no excuse for his actions, EO asks to be allowed to present the queen with one gift before they are taken away to the dungeon. 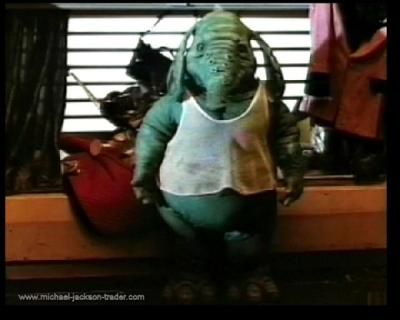 The robots transform into several instruments, Hooter mans the keyboard, Fuzzball a guitar, and Geex takes over the drums. This whole sequence looks incredibly stop motion by today's standards, a lot like Beetlejuice and Tim Burton to be honest, but back then you didn't care or even notice. I remember being like "Wow! Those are some neat effects!" The equipment turns on just in time instilling Captain EO with magical powers that transform the queen's minions into dancers. 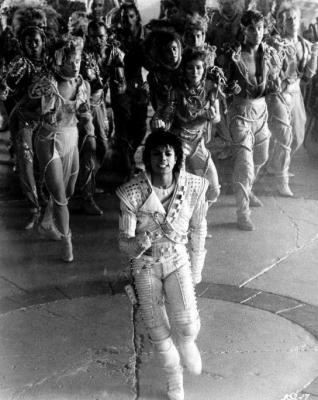 The whole musical sequence that follows is classic Michael Jackson a lot of fun to watch. In the end, Captain EO transforms the queen back to her original beautiful self and saves the planet.

I remember loving Captain EO as a kid and watching it again now it still holds up in my opinion. What a lot of people may have forgotten about the film and attraction is how strong a team put it together. First and foremost George Lucas produced the film. But also, Francis Ford Coppola directed, James Horner wrote and conducted some of score, Gary Rydstrom worked on the effects, Anjelica Huston played the evil queen, and then obviously Michael Jackson as EO. Whoopi Goldberg even hosted a short making of special on it. 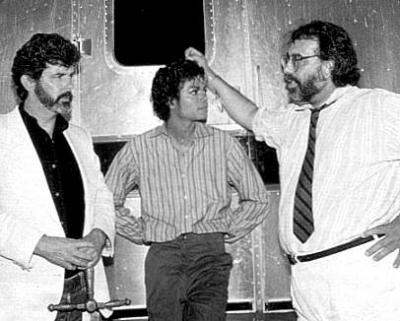 Surprisingly though, much of this film has been lost into history. It was never release on home format (to my knowledge anyway) and it's very hard to find any remnants of it's soundtrack or video around today. I did notice that you can still buy copies of it's original posters on moviegood.com. There is even an unofficial website for the film with petitions going to George Lucas to not only have it released for the home but also back into Imax 3D. I for one would love to see it again on the big screen and own a copy. If for nothing else simply nostalgia. 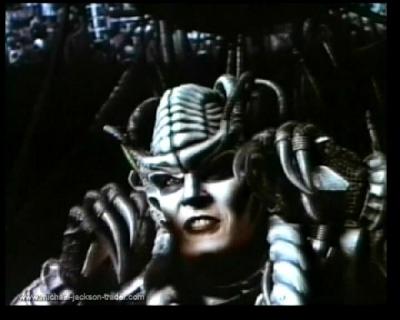 My best original memories of EO were the 3D elements of it. The queen's claws coming out into the audience really scared me at the time. And I loved seeing Fuzzball fly out over the crowd as everyone reached up to try to pet him! 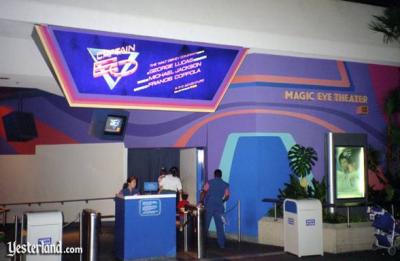 But I remember EO as being an Epcot attaction at Disney World. After all, it did play there the earliest and was set in the Future World area at Journey to Imagination which added to it's whole theme. It was replaced there with "Honey, I Shrunk The Audience", which is a good attraction, but I'm very surprised is still around. The "Honey, I Shrunk The Kids" films came out in the late 80's and early 90's. I'd guess that most any kids going through that show now have no idea that it's even based on those films. 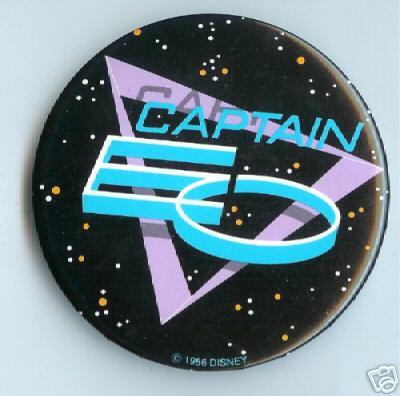 So I look forward to the day that a new generation might have a look at EO, but it seems unlikely. At least you can still find it online!
20
Login To Vote! 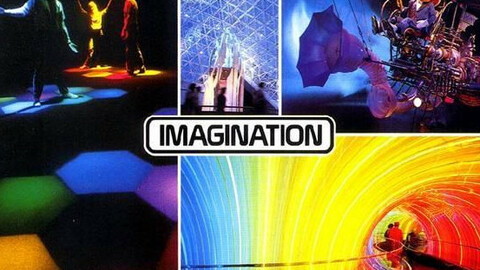 11
mcogfan
Journey into Imagination
My last Epcot attraction from the past. 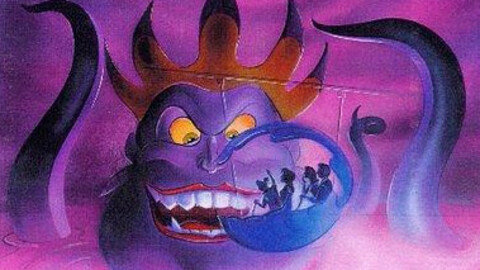 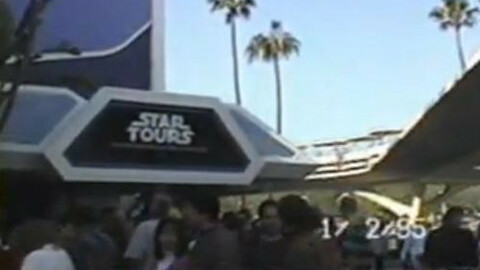