A Talk With Cindy Morgan

She was in Caddyshack and TRON...Now she is my newest interview.
By Caps_2-0
On
"Caddyshack" stands as one of my favorite 80s comedies, and "TRON" also occupies a place in my pop-cultural heart as well. Two disparate entities, they nevertheless share a connection. The two of them are united by my newest interview subject, Cindy Morgan. 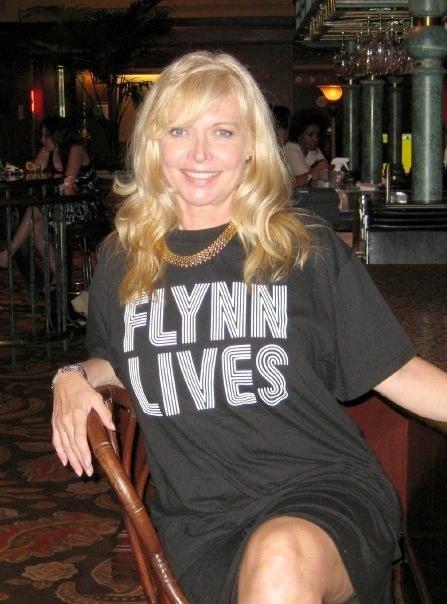 Both of those movies are frequently discussed on this website. One needs only take a look at the quote box at the top of the page to see proof of that. I recently had the opportunity to interview Cindy, and I hope that you'll enjoy it.

The RetroJunk Interview With Cindy Morgan!

Caps: What were your pop-cultural likes growing up (favorite movies, music, books, TV)?

Cindy: I was a big fan of both science-fiction movies and television comedy. I was a big Jules Verne fan. When I was a disc jockey, I played rock, jazz, everything from adult contemporary to classical.

Cindy: Twelve years of Catholic school with nuns. It was like Hogan's Heroes; at least we had a chance against the guards. In high school I had four years of Latin, two years of French. A lot of language and math, lots of studying...which, I admit came in handy later.

Cindy: I sort of fell into it. My first college of choice was the Illinois Institute of Technology. At the open house, there were four girls. It was all guys. Coming from an all girls Catholic High School, I found all the male companionship intimidating, so I chose a Liberal Arts college, Northern Illinois University instead. Even there, I was so shy that I had a stutter. I was enrolled in a speech class. I was not a good speaker, but a fairly good writer. My professor suggested communication as a major, and that got me into broadcasting. I was making a $135 dollars a week doing morning drive in a major market, and when nobody would let me do commercials I said, "I'm going to LA." And I did and got an Irish Spring commercial about the time I got out of my car. 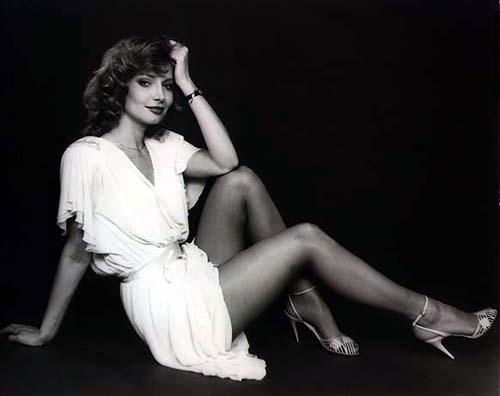 Cindy: I was always in a version of the entertainment business from college on. Before that I wired and soldered circuit boards for Arctic Cat Snowmobiles. My father, a plant manager at Stewart-Warner in Chicago, got me the job.

Caps: Many of our readers are familiar with you from the movie "Caddyshack". It was one of the first R-rated movies I ever saw. Was it as fun to be filming it as it ended up being on-screen?

Cindy: We were absolutely having the best time possible. It was a challenge certainly working with four of the funniest men on the planet, and there was quite of bit of improvisation. It was the longest and best party I've ever attended. 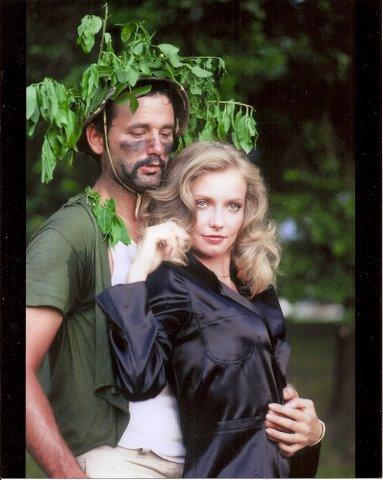 Caps: I've heard a lot of stories about Jon Peters and Peter Guber, and not all of them have been flattering. What were your experiences in working with them?

Cindy: I worked with Jon Peters, one of the producers of "Caddyshack". My Daddy always told me that if I "...have nothing nice to say, don't say anything at all." Peter Guber I never met.

Caps: Did any of your scenes end up on the cutting room floor?

Cindy: Probably, I'm guessing. A lot was shot and often when we didn't even know we were filming. The piano scene for example, I didn't know the camera was rolling
until I saw the light on the camera out of the corner of my eye. That simple improvisation that was suggested by Harold Ramis and turned out to be one of the funniest scenes I did in the film.

Caps: You guest-starred on several episodes of "CHiPS", one of the most notable shows produced by MGM Television. The studio itself was in turmoil for much of the 80s. Did you sense any of the tension during the
episodes you filmed?

Cindy: Not from MGM. I sensed tension among the actors, but that's the usual "who's in charge" kind of tension. The studio heads didn't discuss their business with actors on the set. Doing "Chips" was a challenge. I was doing a lot of very physical stunts. For example, in one episode I chased a speeding car, leapt onto the roof and wrestled the keys out of the ignition through the sun roof. That's not something I do every day.

Caps: In 1982, you starred in "TRON", one of Disney's earliest attempts to change their image. What are the biggest memories you carry from filming that movie?

Cindy: We knew at the time that it was so groundbreaking, that much of what we did was experimental. People often assumed it was shot green screen or blue screen. It was not. In the TRON world scenes we were shot in black and white in very uncomfortable and I felt unflattering costumes. I found it challenging to make something that was so highly conceptual REAL for me, or otherwise it wouldn't read well on the screen. Side not: There were video games on the set to inspire us. 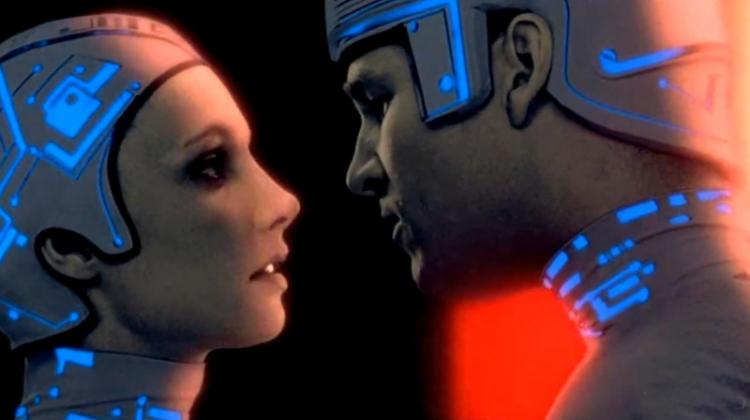 Caps: Between Ron Miller's managing and the takeover attempt on the studio by Saul Steinberg, Disney had a lot of trouble in the 80s, too. What was the atmosphere at Disney like during the filming of "TRON"?

Cindy: Well again studio executives never discuss their business with actors on the set of a film. We would occasionally see the "studio suits" when they would come down and visit the set or in the commissary. Studio Execs do not discuss their business with actors working on the front lines of the film. It's just not done. The only way I found out about decisions and executive decisions, the only time I had a glimpse into what went on in the minds of the executives is when I worked as an Associate Producer.

Caps: You had a recurring role as Gabrielle Short on "Falcon Crest". When prime-time soaps of the 80s are discussed, it's usually "Dallas" and "Dynasty" that are most acknowledged. Why is "Falcon Crest" not noted as
much as the others?

Cindy: It depends on the audience and who you ask. "Falcon Crest" is extremely big in Europe. My understanding is its being released in several countries,
either Spain or Germany before it gets to us here in the US.

Cindy: I remember it was down to Linda Hamilton and I on "Terminator". I was offered a role in "Police Academy", but I was between two agencies at the time, and somebody dropped the ball. I auditioned for Michael
Crichton's movie "Looker".

Caps: How good is your golf game in real life?

Cindy: Not very good, but I have my one big golf trophy. That's because I was playing with a pro at one tournament, and he walked with me and showed me what to do the whole time. Like any good actor I paid attention and took direction. 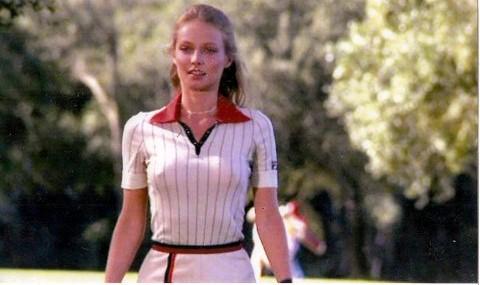 Caps: Are there any big plans for the 30th anniversary of "Caddyshack"?

Cindy: I'm sure Warner Brothers has many plans. The Blu-Ray just came out.

Caps: What's the farthest location you've ever traveled to shoot a movie?

Cindy: The island of Kauai for the "Bring Em Back Alive" pilot. I also shot "Hawaiian Heat" on Oahu. and Vancouver, Canada for "Return of the Shaggy Dog". I love Vancouver and jogging in Stanley Park. 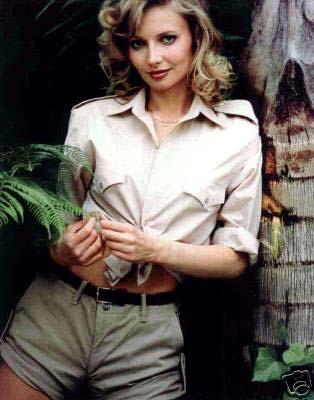 Caps: You've been active in the entertainment industry for over 3 decades now, so what would be your idea of the perfect day off?

Cindy: I enjoy very simple things: Cooking a great meal, and hanging out with friends here on the beach.

Caps: What are your feelings about shows like "Dancing With The Stars"?

Caps: How has the entertainment industry changed from then to now?

Cindy: A lot more information is decimated rapidly via the internet, and decisions are based more on the reactions of the public. The public is less controlled, and has more choice I believe. The "Boys Upstairs" are
paying attention to what people are saying.

Caps: What advice would you offer to those who hope to become actors and actresses?

Cindy: Good luck, first of all! Secondly, please employ business sense, common sense, sense of humor, and never forget who you are.

Cindy: I would listen more to my heart and pay absolutely no attention to what agents and managers say. 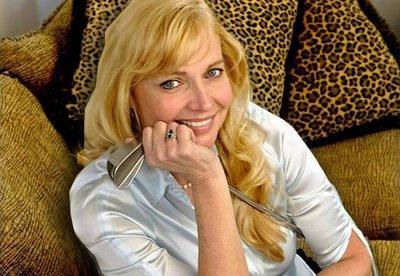 21
933planetx
13 things about an Aging Gamer
13 Ways To tell if you are a True Aging Gamer
An unhandled error has occurred. Reload Dismiss