More books from the 80's and 90's that I, and hopefully others, enjoyed in days past.
By DigiDestined
On
I’d like to start by thanking everyone again for the great response to my first article. For the follow up, I’ve decide to focus on three essential series that, as a pre-teen bibliophile in the 90’s, you couldn’t possibly miss. Then I threw in one obscure series just for the hell of it (and because I'm nuts for it). Enjoy! 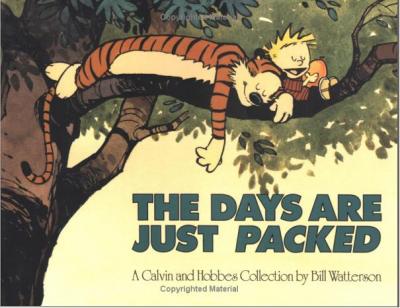 While not exactly a book per se, the comic strip was regularly bundled up in anthologies and sold in my school’s book order catalogue (for more information on book orders, you can check out an excellent article here on Retrojunk “Ordering Scholastic: A Memory“ by Wooster). The adventures of 6 year old Calvin and his stuffed tiger Hobbes were written by now-retired Bill Watterson partly in response to how lousy he felt modern comic strips had gotten. While his opinion is debatable, it’s undeniable that there’s been a sort of “emptiness” to the funny pages ever since the strip was cancelled in 1995.
The strips usually centered on Calvin in Hobbes having some kind of adventure. They ranged from the fantastic (a trip to Mars), to the everyday (hitting Suzie Derkins with a water balloon). The interesting thing about the fantastic adventures was that, although logically they only happen in Calvin’s imagination, there would usually be some tangible evidence to suggest they really occurred. For example, Calvin tries to ride his bike, but sees it turn into a monster and attack him. In the final panel of the strip he walks into the house, covered in scratches, where his dad congratulates him on building “character”. Did Calvin get the scratches from the bike attack, or did he just fall off a lot? Which brings us to the enigma of Hobbes…
I don’t believe any question ever asked about any character in any comic has been so persistent: is Hobbes real? Whenever asked, Watterson refuses to answer one way or the other. For the uninitiated, whenever the strip is drawn from Calvin’s point of view, Hobbes is a humanoid talking tiger. Whenever anyone else’s view is shown, Hobbes appears as a stuffed toy. Like the bike incident above, there’s some debatable evidence for either viewpoint. If I ever get a chance to talk to Guillermo del Toro, I’d love to ask him whether the nature of the faun in “Pan’s Labyrinth” was inspired by the Hobbes paradox. Here’s my own two cents on the issue. I’ve always believed that Hobbes is real, but that only Calvin can see him.
It’s really amazing how many people, no matter how polite or boring they actually were as a child, say they identify with Calvin. He speaks with the vocabulary of an English Major, probably has ADD (thankfully he lived in the pre-Ritalin era), and hangs out with a walking-talking tiger. Watterson himself stated in an interview that Calvin was never meant to be a real six year old. I have this theory that Calvin, in a way, is sympathetic because he represents how we all see ourselves at six. Someone who’s more intelligent than the world gives us credit, is talked down to by those who don’t recognize our creativity, has the energy to do anything and the imagination to see everything. Or maybe that’s just how we always see ourselves. Peace out C & H. 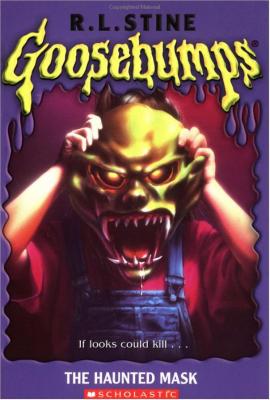 In the time before M. Night Shyamalan, there was the original master of the twist ending, R.L. Stine. Stine once mentioned in an interview that his method for writing the Goosebumps books was to write the ending first, and then come up with ways to try and trick the reader into thinking down a different path. Most of these endings did come completely out of left field and were one of the more enjoyable things about the books.
I still remember the first Goosebumps book I read, “The Horror at Camp Jellyjam”. I was only 9 or 10, and at the time the book actually scared me a bit. But like the song goes, “life’s no fun without a good scare”. I was hooked. I slowly worked my way through most of the series, either buying the books or borrowing them from the library. Curly the skeleton had a powerful hold on me.
Looking back now, many of these books aren’t quite as terrifying as I remember. While some truly scary concepts popped up in books like “Night of the Living Dummy” and “Say Cheese and Die”, some were just plain weird. Was anyone actually scared by “Chicken Chicken”? Nonetheless, the quality of the writing never really dipped, despite all 62 books, including spin-offs, being written from 1992-1997 (over a book a month)! This, along with the macabre aspect of his writing, earned R.L. Stine the moniker of the “Stephen King” of children’s literature.
The reason for the series’ cancellation was simple, declining sales. The crowd that grew up with Goosebumps moved on to other book series, and the next generation was busy being captivated by the next big book event. Fans of the series though, will be glad to know that Goosebumps is undergoing a bit of a revival. Scholastic’s “Graphix” imprint is working on releasing several of the titles in graphic novel form, and R.L. Stine has stated on his website that he’ll be writing several new Goosebumps books based around the “Horrorland” amusement park. Long live the Retro-lit!

Choose Your Own Adventure 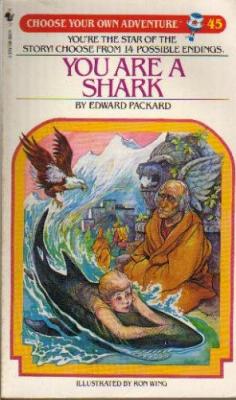 How often have you been reading a book and come to the conclusion that the main character must be a complete idiot? Were you convinced that, given the same circumstances, you could do better? Well, here was a chance to put your money where your mouth was (sort of), the “Chose Your own Adventure Series”.
For those of you like myself that didn’t really have access to computer text adventuring, these books represented a great alternative. Like any other book you start off on page one, and keep reading like a normal book until you reached a branching point in the story. The book, being written in the second-person, would ask you what you wanted to do next. Do you want to trust the Russian double agent? Then turn to page 10. Prefer to hunt robotic trout in Lake Michigan? Turn to page 47. This wasn’t exactly sandbox gaming, but it was still a nice break from always following the same path.
My school had a whole library shelf devoted to these books. My personal favorite was “You are a Shark”, but I also enjoyed other titles like “Invaders of Planet Earth”, or “Master of Martial Arts”. My one guilty shame with these books was how rampantly I cheated at them. Officially, the rule with these books was that when you reached an ending, no matter how much it sucked, you were supposed to start over on page 1. I used to hold the page I made the decision on with my finger, check out where the decision led me, and if it was really bad and arbitrary (how was I supposed to know that cupcake had a grenade in it?) I’d go back to the decision page and take the other path. If anyone ever calls me out for it, I’ll just say that my character was secretly clairvoyant. Or, if I was lazy, I’d just flip through the book and start a story thread at random. There was actually one book, “Inside UFO 54-40”, whose best ending could only be found by doing this (none of the decisions you make in the story actually lead to that page).
Although these books weren’t the first or last of their kind, it was sad to hear the original Bantam Books series ended in 1998. Luckily though, a company called “Chooseco” has bought the rights to the series, and has begun republishing many of the classic books as well as new ones. While it’s great to hear a new generation will be exposed to this great series, I’m going to miss the cheesy art of the originals they’ve replaced. 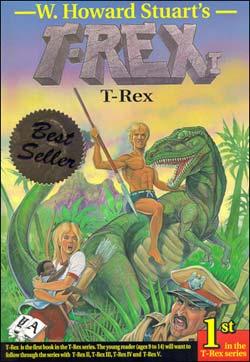 In this era of skepticism, even sensationalist stories are expected to contain some facsimile of scientific truth or organization. Maybe that’s why a series like “T-Rex” is so refreshing, the science behind it makes absolutely no sense. For those of you who don’t know (and I suspect there are many) the titular Tyrannosaurus is brought into the present via an egg in an Antarctic iceberg. It’s crazy I know, a plot device straight out of a 1930’s Superman cartoon. But when you get right down to it, who cares? The book was about a kid and his pet T-Rex. As a dinosaur-crazy kid (see my previous article’s entry on Dinotopia) this was like manna from heaven when I found it at my local library.
The basic premise is this (my memory’s a little fuzzy, so I may get some points wrong), a family is yachting in the south pacific. Unknown to them an iceberg has broken off of Antartica and is bearing down on them. The result of the collision is predictable, but the family manages to climb on the iceberg. While on it the boy, Alex, finds a thawing Tyrannosaurus egg, which promptly hatches. The bouncing baby T-Rex imprints him as his mother and soon becomes a loyal companion. Long story short, the iceberg reaches a tropical island; adventures ensue.
This is the kind of story I could see Edgar Rice Burroughs or maybe Gary Paulson writing. There’s a lot of emphasis on the brutality of wilderness survival, and travel from one fantastic location to another (lost civilizations in the Amazon anyone?). I remember being disappointed that the fifth book ended in a cliffhanger, and no subsequent books were published. While researching this article though, I found that a sixth book was written, it just never had wide distribution. I’m going to go see if I can hunt down a copy.

Thanks for reading my second stab at an article here on Retrojunk. I’m debating whether or not to write a part three and turn this into a nice little trilogy. The big decision is what books to include. Let me know what you guys think. Take ‘er easy!

Choose Your Own Adventure:
http://www.gamebooks.org/cyoalist.htm

17
DigiDestined
Lowly Bookworms, Hear my Cry
Who else was a bibliophile growing up?