90's memories of music, wrestling and fiendish fun with a punk rock twist
By Hoju_Koolander
On 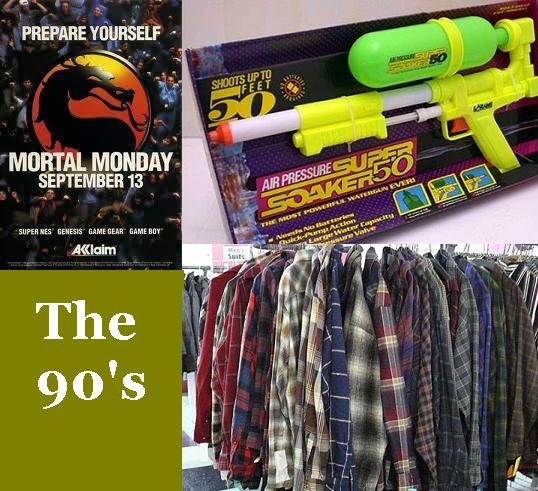 The 90’s are often remembered for such moments as the rise of the Super Soaker, the release of Mooortaaal Kombaaaaat on “Mortal Monday” and Flannel (so much flannel). Now all that excitement that was going down in the first half of the decade, but the latter half of the 90’s had a more terrifying climax. One in which caused this chubby, white kid from suburbia to get as close to punk as he would ever be. Yes my dear fiends, I’m talking about the return of The Misfits or more officially, Misfits. 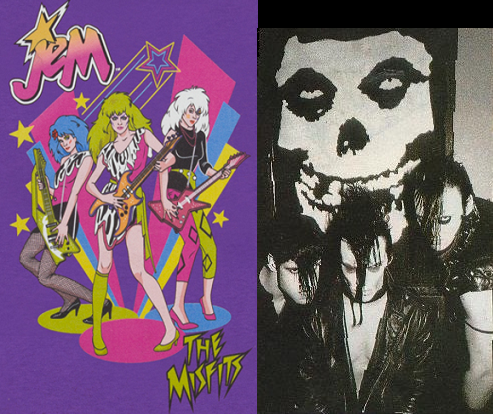 No, I’m not talking about the neon-haired rivals of Jem and The Holograms from the fondly remembered 80’s cartoon, but the devilish punk band that influenced a generation of kids who couldn’t play a guitar to save their life, to give it a shot anyway. Still not quite sure who I’m talking about? Allow me to present you with this memory jogging image… 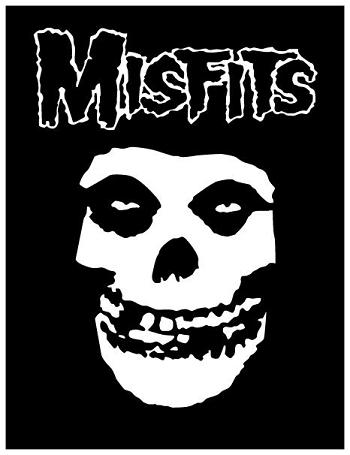 Without a doubt you’ve seen that logo before, but did you know that this band of…(naw,too easy)…made music, wrestled for WCW and had a career in movies? I did (obviously) and I got to experience their particular brand of musical madness up close and personal. But before we get to their 90’s resurrection, let me quickly catch you up on what went down during the first deadly decade of the band’s existence. 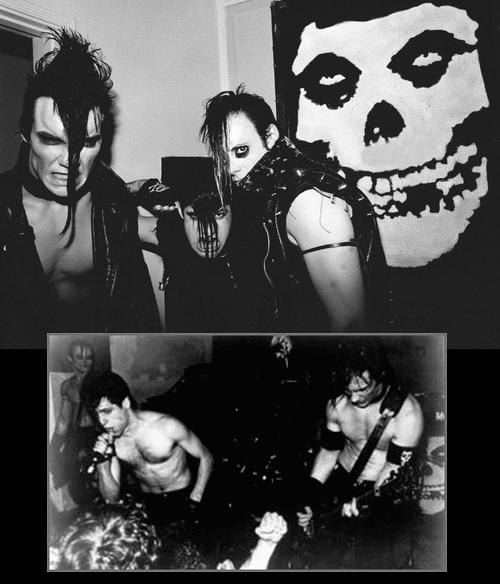 In the late 70’s a nerdy comic book fan in Lodi, New Jersey decided to literally sing the praises of his favorite horror and sci-fi movies with a 50’s rockabilly/punk rock edge, that man’s name was Glenn Danzig. Yes, he of “Mother” fame. Together with bassist Jerry Only and eventually Only’s younger brother Doyle Wolfgang Von Frankenstein, the trio (with various drummers) formed the classic line-up of The Misfits. Arguably the band was more popular for the novelty of their ghoulish stage attire and promotional materials than their contributions to the world of music at large. 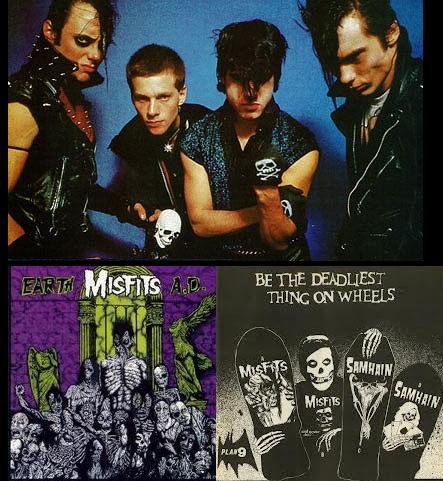 Regular use of profanity and dark themes reflected in lyrics like, “I got something to say, I killed your baby today” from the band’s signature tune “Last Caress” surely kept Danzig and the self-proclaimed “Twins of Evil” off the top 40 charts of the day, but endeared them to a rebellious sect of violent youth known as punks. But even with their loyal following the band eventually ceased making noise in 1983 after the release of their third and most aggressive album, Earth A.D. From then on The Misfits existed only in legend and the occasional skateboard design. Danzig went on to his own solo career and the rest of the band faded into relative obscurity. 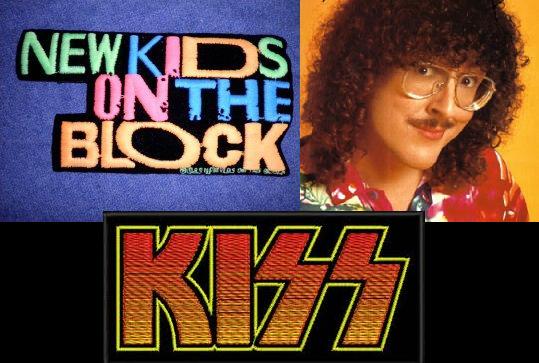 Now I grew up in Southern California listening to New Kids on the Block and “Weird” Al Yankovic, so making the jump to the macabre musical mayhem of The Misfits was a major leap for me. The short story is that a classmate in high school introduced me to the music of KISS and then invited me to be the singer in a garage band, where my musical horizons were expanded immensely during rehearsals. We even ended up adding a few Misfits tunes to our sets. But my love for horror started much earlier, in the elementary school library. Anybody remember these orange beauties? 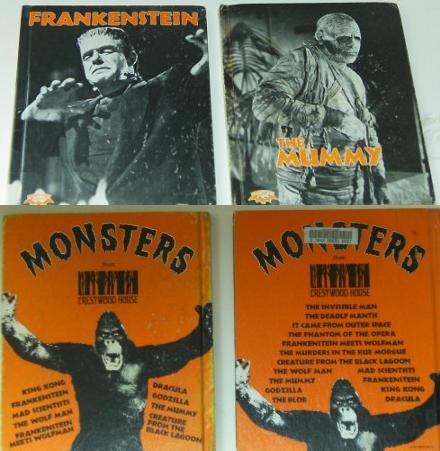 Basically a plot summary of old horror movies set to black and white photos from the films, these book were my number one check out item from the school library. I loved taking a peek at this forbidden world where murderous, often misunderstood monsters wreaked havoc. Knowing that my 8 year old self would never have the guts to watch that kind of “scary stuff” in motion, these books were a great compromise. My point being, the seed and secret desire for freakish fare was planted early. 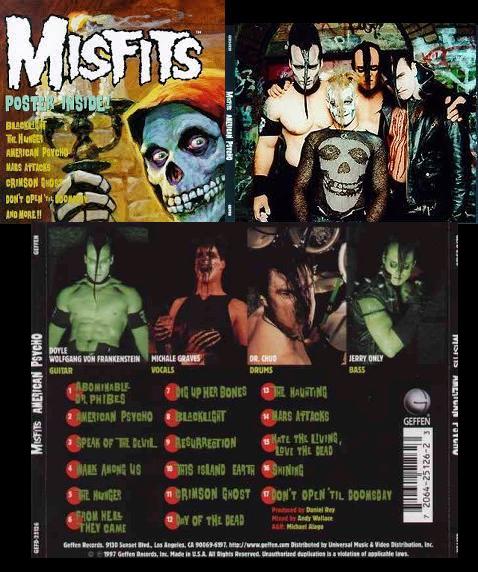 Now back to my Misfits Memories. In 1997 my bandmates showed me the cover of the Misfits American Psycho album and while it reminded me of those scary orange books of my youth, it wasn’t until I flipped the jewel case over and beheld the psychotic looking creatures bathed in colored lights that I decided to give it a listen. What kind of music could these madmen possibly create? Answer: Just the best ever! I have to confess that I never really appreciated the raw, offensive edge of the original band’s music. The new style retained the energy and horror themes without resorting to juvenile, shocking lyrics. 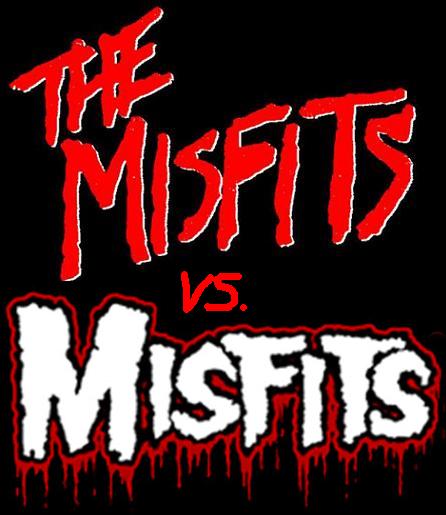 Now this band, called simply Misfits, was revived by Jerry and Doyle from THE Misfits after spending most of the 80’s in court with Danzig trying to get the rights to tour using name. Once the verdict was in they quickly recruited drummer Dr. Chud and vocalist, Michale Graves to bring new life to the Misfits legacy of brutality. Hitting the road and hitting the studio, they did just that. 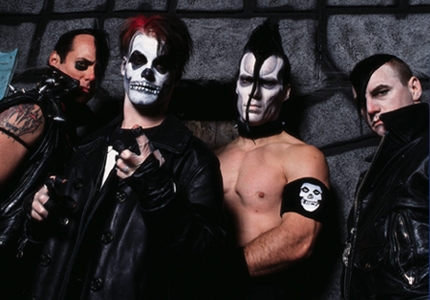 The guys in my band were anxiously awaiting their return, having heard about the Misfits from older siblings and they all went to see them at the House of Blues on Halloween night. I wouldn’t have my introduction to their live show until a year later on a double bill with the even more outrageous, G.W.A.R. (perhaps you’ve seen them being mocked by Beavis and Butthead). After witnessing cartoonish decapitations and being drenched in faux bodily fluids, I found myself ready to witness the horror. 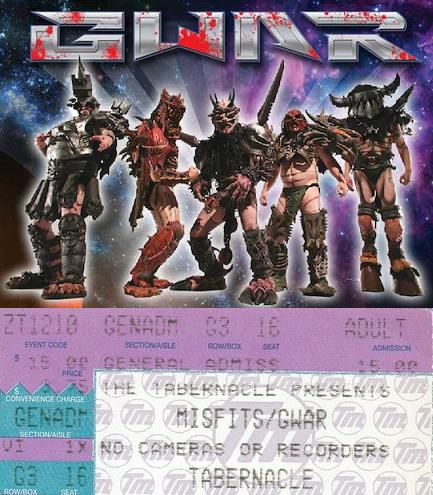 As the lights went out the skull-faced figure of the Crimson Ghost appeared carrying a flaming torch and skulked across the stage. Suddenly, out from under the drum kit slithered drummer , Dr. Chud, followed by a struggling, straight jacketed Michale Graves and finally the hulking mass of muscle and hair gel that are Jerry & Doyle, who stomped onto the stage and began the barrage of sonic slaughter. I’d never seen a musician punish their guitar the way Doyle did, he seem to be literally PUNCHING out each note and launching it into our ears. Graves convulsed and gyrated like a palsy patient as Jerry bashed his bass into submission. Yeah, I was hooked. 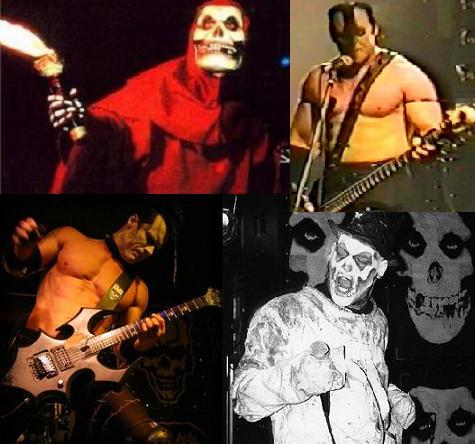 Over the next 3 years of high school I saw the ‘Fits live whenever they played within a 50 mile radius of my hometown. But the cool thing was that I also got to watch them during my weekly viewings of WCW Nitro. You read correctly, the Misfits wrestled for WCW! 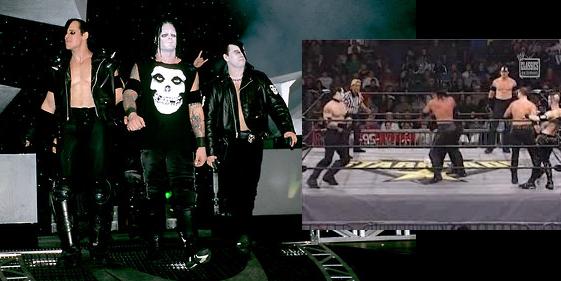 See, they got hooked up with a wrestler named Vampiro, who borrowed heavily from their stage look. Before long the band acted as a sort of posse for Vampiro during matches, providing the occasional outside interference in his favor and eventually Jerry Only himself entered the squared circle to mix it up! 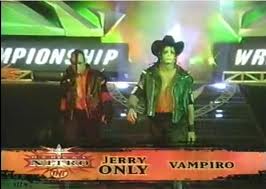 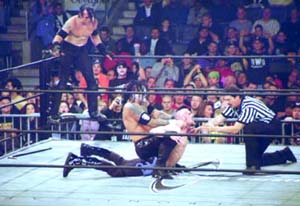 I can still remember the first time I saw the Misfits appearing backstage with a goth girl named Daphne trying to seduce Only before biting him on the nose(Danny DeVito Penguin style)drawing blood. It caught me totally off guard in the most awesome way. Jerry Only’s wrestling prowess, not so much. They even added a wrestling element to their stage show. 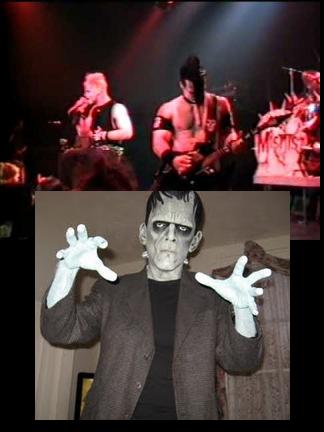 During a guitar solo at one show they had a giant guy in full Frankenstein garb attack the band. Graves gave him a chair shot to the back which enraged the beast and caused him to chock slam poor Michale onto the hard stage floor. Ultimately the Crimson Ghost returned with his torch aflame to scare off the beast. Soon the band disappeared from the Monday night program after a falling out with Vampiro and moved into the world of film with legendary Zombie film director, George Romero.

There’s no doubt that Night of the Living Dead had a huge influence on the band (they actually have a song named after the film), so it made sense that they offered to write a few songs for Romero’s upcoming film Bruiser, if he would direct a music video for the song “Scream” from their new album Famous Monsters. The band even got a cameo as the headlining act of Halloween party in the climactic final scene. 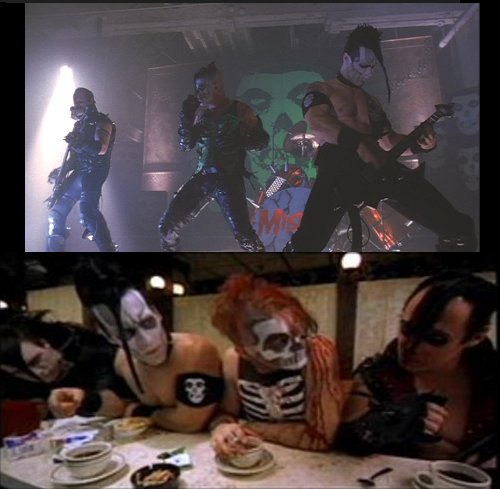 For the scene a stuntman was added to the band as an extra guitarist who tussles with a rowdy audience member, who ends up being smashed with a guitar. Graves also had a brief scene out of makeup as a police officer who sadly, smashes no one with musical instruments. They also appeared in a scene for the Insane Clown Posse movie Big Money Hustlas. The 90's were strange times indeed. 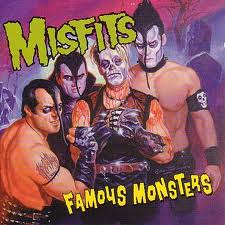 Famous Monsters would end up being the final, official album of this line-up which lasted just 5 years. But what a way to go out. Fantastically layered production and lots of feedback gave each song an eerie feeling that bled from one to the other like an opened jugular vein. My excitement for the release of the album resulted in my first experiences with online streaming music and video in the early days of the internet.

I remember a friend taking pity on my ancient desktop computer and setting me up with 486 to allow for Napster and RealPlayer to run. First up for download (besides the obvious choices...ahem) was the video for "Dig Up Her Bones" from American Psycho and the preview clips of songs like “Fiend Club” and “Scream” from Famous Monsters. I listened to those clips 100’s of time until the official release and yes, eventually bought the album (so there, Lars!). 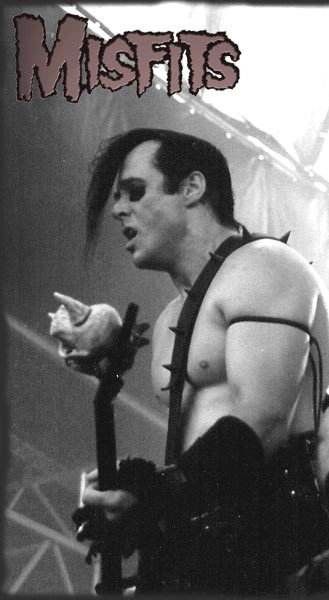 By 2002 all the members of the band had quit, leaving Jerry the ONLY one to carry on (zing!). My fandom limped through a few more albums, but no more live shows. There have been reunions by the defecting members featuring everyone except Jerry, but my excitement for the band had faded. There are so many more memories, but this article is dreadfully long already. So yes, the Misfits were a big part of the 90's for me, but lest you think this article has not been "retro" enough, allow me to leave you with this fantastic tidbit. 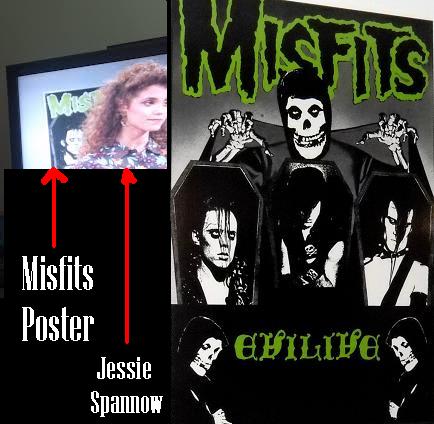 That's right, The Misfits actually appeared in an episode of Saved By The Bell! Jessie's snotty, new step-brother from the East coast decorated his newly acquired room with the poster for the band's Live album, Evilive and later got a knuckle sandwich from Jessica Myrtle Spannow herself. If that's not a retro mash-up made in heaven, er, hell, I don't know what is!
11
Login To Vote!
More Articles From Hoju_Koolander

9
Quote O' Matic
Tatsu: "I do not understand. Why do the Turtles trouble you, Master? They had not been seen for many days."
Shredder: "Something about the way you describe their fighting. Something familiar, something...from the past."
Added By: System
Teenage Mutant Ninja Turtles
Related Articles

11
Vertex
Battletoads Cartoon Madness
We take a look at the only episode of Battletoads ever aired.
An unhandled error has occurred. Reload Dismiss