An article about a 20+ year old cartoon starring Rick Moranis.
By MoranisFan1991
On
We here at Retro Junk come to this site to recharge our nostalgia through stuff we've seen before in the 20th century. However, others also check out what they missed, and sometimes, they would share that to those unfamiliar, such as myself.

But enough about that, shall we begin? 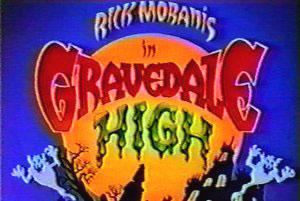 Gravedale High was an old cartoon from 1990. The cartoon is created by Hanna-Barbera, and starred my favourite comic actor, Rick Moranis, as Max Schneider, a human teacher who teaches a class of teenage monsters. The monsters at the school can't stand humans, but Schneider was an exception to most of them. 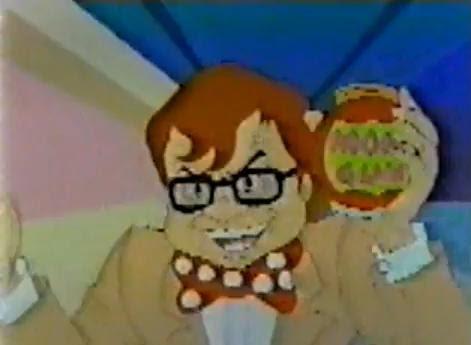 Mr. Schneider is the only human at the school. He is the teacher, and he tries his best to keep his students in line, especially Vinnie, Frankentyke, and Duzer. Schneider also helps them whenever one of them is in a pickle. If that's not enough to what he does, he occasionally takes them to human places on field trips. Schneider can be best described as fun, kooky, and kind-hearted, kind of like if he was one of the teens himself. 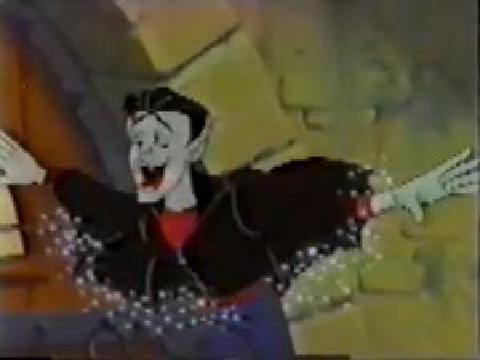 The cool vampire student. Vinnie often shows up late for class, but he doesn't care because he's a free spirit. Vinnie can make his wings appear by snapping his fingers. But one episode had him lose the confidence to fly after he got struck by lightning. 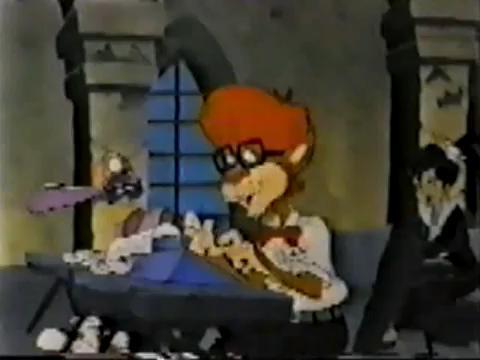 The geeky wolf boy. Reggie is pretty much the only student in Mr. Schneider's class that actually pays attention, the teacher's pet, as you would put it, no pun intended. Reggie often speaks in a Sesquipedalian manner, which means he uses big words like any stereotypical smart guy would on TV. He is often seen with Vinnie, which would imply that they're best friends. 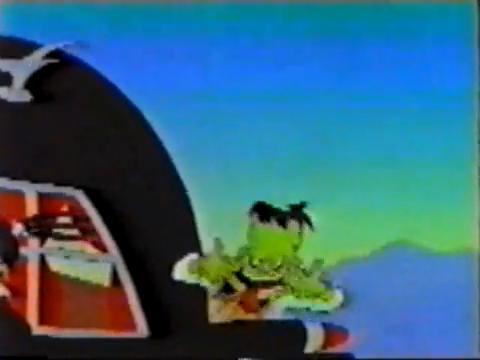 Basically the monster equivalent of Bart Simpson. Frankentyke is what you would consider a prankster. He has an older brother named Big Frankie, who used to attend Gravedale High, and Frankentyke felt left out when Big Frankie would rather date the girls than spend time with this little brother. 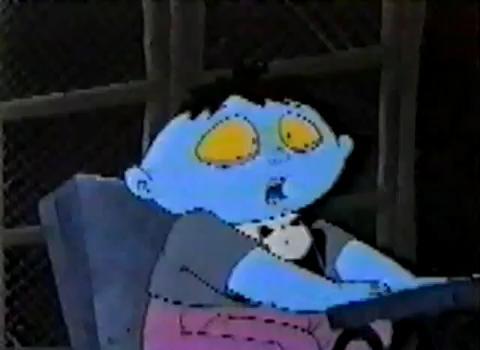 The pint-sized zombie who sounds a bit like Peter Lorre. There's not much known about J.P., but he has a jar full of pet leeches that are endearing to him. 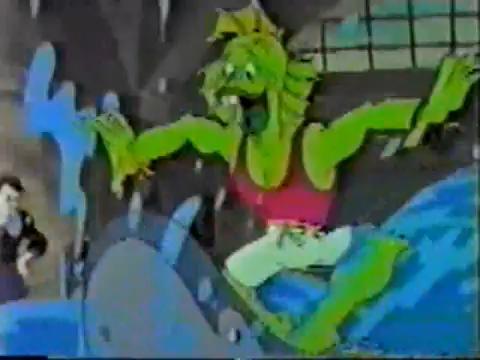 Gill Waterman
The radical lagoon creature. Gill loves to swim, surf, and among other things, eat pizza. He and Frankentyke are best friends, and their bond was tested when Gill started to practice for a surfing contest, which made him late for class and made Frankentyke upset. 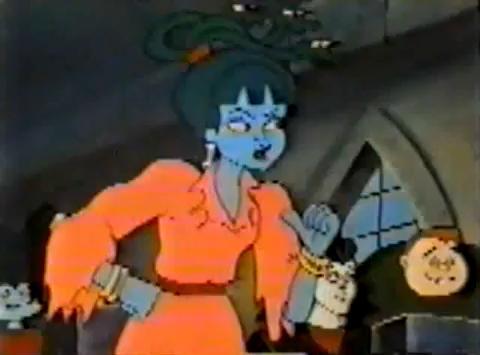 A gorgon with a bit of an attitude problem. Duzer's hair snakes have minds of their own, but she can command them if she wanted to. Duzer can be self-centered at times, but deep down, she still cares about her friends. 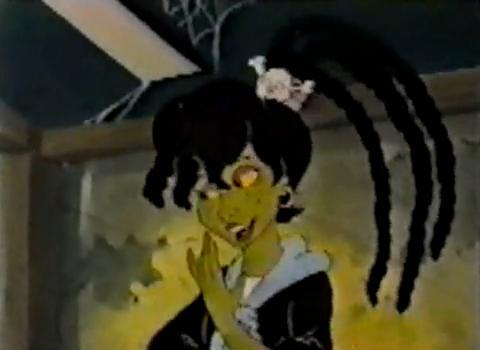 Blanche is a sweet, Southern Belle zombie girl. One episode revolved around her recipe for Monster Gumbo, and when Mr. Schneider's class thought of selling it in a chance to win an award, as expected, it went to her head and her classmates can't take her bossiness anymore, but given the nature of the show, things are okay in the end. 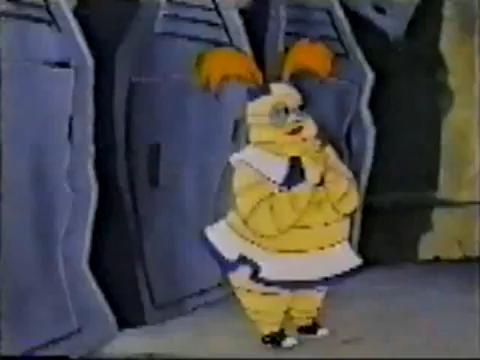 The chubby mummy girl. Cleofatra doesn't eat as much as Gill does, but it's close. She has a crush on wolfman soap opera star Billy Headstone, but was too shy to send him a picture of herself, so she used Duzer's picture instead, which wasn't a good idea because Billy took Duzer out instead. 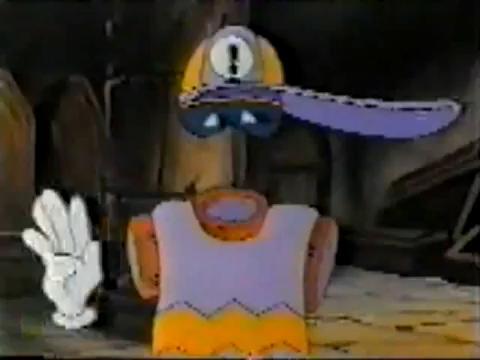 The invisible student, and the comic relief. Sid wears a baseball cap, sunglasses, a shirt, gloves, and shoes, but no pants, oddly enough. He would often use impressions, most often, that of Rodney Dangerfield. 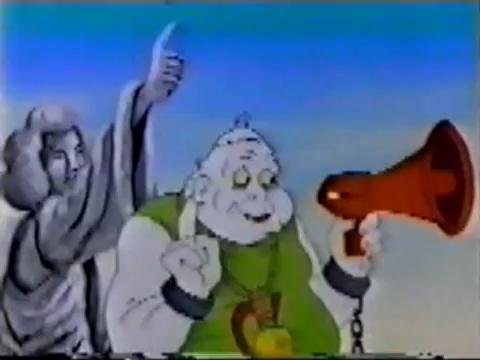 The coach for the sports team at the school. Cadaver doesn't really like Mr. Schneider due to him being a human. 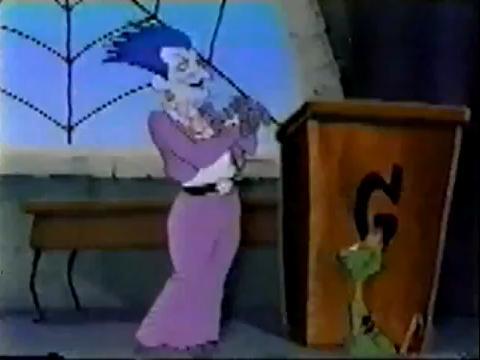 The headmistress of Gravedale High. The school has been passed down to her from her forefathers for hundreds of years. Crone has a detachable metal gauntlet she uses for a hand, and she also has a flattened green cat named Clawford, who would often chase a humpbacked mouse around the school.
~~~

The show lasted only 1 season on TV, and since then, people have been video-taping it. I didn't get to see it because I didn't grow up watching this show because I was born a year later, and my parents didn't video-tape it since my mom didn't watch a lot of TV. Luckily, a man by the name of theoriginalmistajonz has shared that along with other old cartoons with us, along with drawing tutorials and video game walkthroughs. I saw Gravedale High on Halloween weekend approximately 20 years after its first airing, and all I could say about it is this:

Due to the premise of the show, I thought it would be rather cheesy, but when I actually watched it the first time, it was really cool. The main characters are likable, especially Schneider, Vinnie, Frankentyke, JP, Gill... oh, who am I kidding? Mr. Schneider and all of his students are really likable! The plots of the episodes aren't too bad, but even though the animation can be off-model at times, at least it isn't as bad as that of what the Nostalgia Critic reviews.

Well, that's all I have to say for my review. I hope you're happy, since I have recharged your nostalgia through it. Have a nice day!
17
Login To Vote!
More Articles From MoranisFan1991