Unraveling the mystery of how Nickelodeon came to be what we know and love today.
By System
On

Have you ever wondered, "What are the origins of that channel Nickelodeon I used to love oh so much when i was younger?"? I know that you have! And that is why I am writing this, my first article, on the beginnings of that channel we used to lust for. This is the first of many parts, so bear with me. In April of 1977, a pay-per-view channel known as "Nick's Flick's" was broadcast in Columbus, Ohio. This was the main inspiration for what would become Nickelodeon. In 1979, The Pinwheel Networkdubuted in certain areas of the US. Broadcasting the show Pinwheel for up to 5 hours a day, it was catching on. In1981, it got some new, better shows, changed its name to Nickelodeon, and the rest is history....... 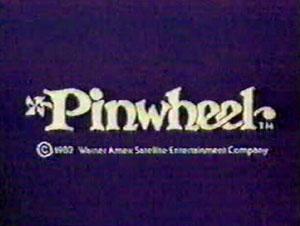 It is only fitting that we begin our journey with Pinwheel. There are probably some of you who do not remember this show. Tsk Tsk. Before Pinwheel, Nickelodeon was a nothing channel. It bombed in the ratings (as it should today, I might add)until Pinwheel came along, and it was this show which started Nick on its dominating run of the 80's and early 90's. It can be seen as a rip-off of Sesame Street, but thats only to those who did not know Pinwheel. 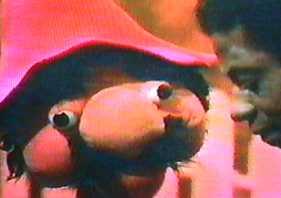 Now, Pinwheel had it's fair share of puppet characters, just like Sesame Street. There was Plus and Minus, best friends who were always competing with one another, a la Bert and Ernie. There was a grouchy guy who lived in a basement who never came out named Ebeneezer, who remind some of Oscar the Grouch. On top of that, Pinwheel aired several little cartoon shows which took up about 1/3 of the show, kinda like another kids show which was on PBS. Alright, maybe Pinwheel WAS a ripoff of Sesame street, but thats besides the point. It was a great show that aired on Nickelodeon until 1989 that paved the way for some of the best shows that have ever aired on television. 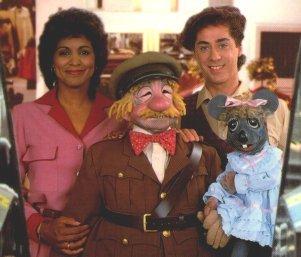 Ahh, Today's Special. The premise of the show is perfect: store closes, mannequin comes to life because he ahs a magic hat. Yeah, it was stupid, but we loved it, and we wouldn't have it any other way. The mannequin's name was Jeff, and although he was dressed like a war general from WWII, he was actually a pretty friendly guy. His best friend, Jodie, was a pretty young lady who was the display manager at the store. The other live action character on the show was Sam, a retired sailor who was now a night watchman who looks like Seinfeld. And if you can remember the show, then you surely remember Muffy the mouse. No? C'mon! She was that annoying little puppet who always had to talk in rhyme. Yeah, it was cute at first, but that wore off REAL fast. TXL was the computer who ran everything in the store, but TXL never worked right, and Sam spent a lot of his time on the show trying to fix it. There were other minor characters, such as Mrs. Pennypacker, Waldo the Magnificent, Mort, and the Mime, but they were only on the show from time to time. All in all, Today's Special was an excellent show, and if it aired tommorow, I would watch, and you would too, whether you like it or not. 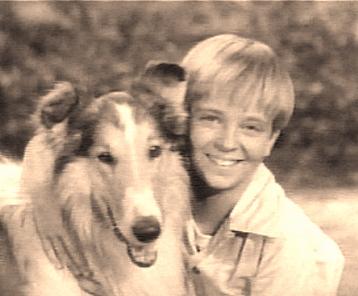 Just looking at this picture of young Timmy brings back memories of that theme song. Although Lassie was in black and white, it was defintely one of my favorite shows way back when. It showed a boy truly in love with his dog, and this dog could do some pretty amazing crap. Lassie (who was a male dog, I believe) could rip people out of burning buildings, sense when a stranger would turn into a burglar, as well a bunch of other stuff. You couldn't watch Lassie and NOT want to own a dog of this caliber. Lassie was pretty much the same show every time you watched it {"What Lassie? Father O'Leary is trapped under the pulpit in the burning Church 40 miles away!!! We gotta go save him")but when it came on, you didn't change the channel. Although it was taped in the the 1950's, it was a show that could appeal to all generations, as it probably still would it they were to air it today.

O.K. I'm sure there are some of you saying "What the hell is Turkey TV?" For those of you die-hard classic Nick fans (you know who you are) this show rings a bell. It was a sketch somedy show where the main character was an animated turkey named Thurman T. Turkey. It was this turkey's prerogative to go around to different nations, film shows from other countries, then "bringin' it home to Hollywood and puttin' it the air"(I think) Some of the more popular skits included "A Day in the Life of Food", "Hillary and Katie", and "Gramps and Sonny". If you REALLY remember this show, then you will remember that the actors who played in these skits were many of the same actors as You Can't Say That on Television. But more on that show later. Turkey TV, although maybe not as well known as some of the others, had a large part in the beginning success of Nickelodeon. Aren't you glad? 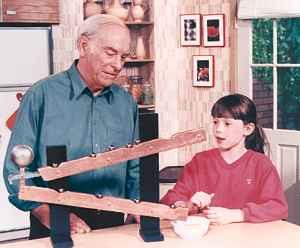 Do I even need to mention the name of the show in the above picture? If you don't know this one, you don't belong on Retro-Junk. Mr. Wizard's World is a classic show which paved the way for other shows such as Bill Bye the Science Guy and Beakman's World, both pretty good shows in my opinion. To its credit, it was the longest running show on Nickelodeon, clocking 78 episodes. Mr. Wizard appealed to everyone, because he sought to make science available to everyone(even though I never had the crap hew as working on the show at home), and he fostered a curiosity in children at a young age, and made them question their surroundings. While this probably pissed off a lot of parents, many people credit Mr. Wizard for helping them make their career choice. All of his experiments were interesting enough to watch for hours on end, but never too complicated to the point where you could not understand them. I'll admit, a fair share of my science projects came from his shows, and they never failed to get me a passing grade. Mr. Wizard was not only a good show, but an educational show which helped to encourage kids at a young age. Like R.Kelly...... 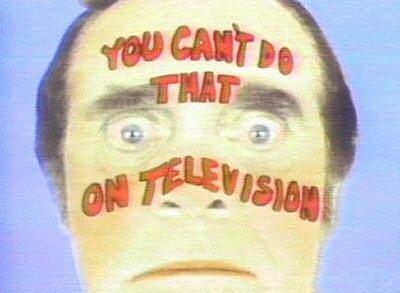 Ahh, nothing like being soaked with green oatmeal or water! You Can't Do That on Television is a cult favorite, and a popular topic here on Retro-Junk. It was the best sketch comedy show to ever air on Nick, in my opinion, and if Nick wanted to boost their ratings, all they would have to do is show YCDToTV once a day. But I diverge. What was it that made this show so special, and propelled Nick into the spotlight. 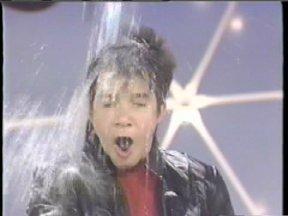 Airing in 1981, YCDToTV son became the highest rated show on Nickelodeon. Featuring a cast of children stars and Les Lye and Abby Hagyard, it was a show that proved to be not only an entertaining program, but what I feel is the most influential show in Nick's history. When you think of Nickelodeon, you think of slime. Where did this slime come from? YCDToTV! The giant geyser outside of Nick studios spews slime in all directions, and the Kids Choice awards slimes every chance it gets. Once again, YCDToTV is a prime player in the history of Nick. (And if you want to know something funny, Nickelodoen doesn't even own the rights to YCDToTV, but it still uses all fo these references. Shitty deal huh?)As far as the acting on the show, it wasn't too bad for kids. Many catch phrases can be remembered from the show, such as "Blue skies...Barthy Burgers...Girls", and my personal favorite "Who do you think's in the burger?". Aside form the "I Don't Know" slimings and the water soakings, YCDToTV is probably best known for its scenes, which included, but were not limited to: the bathroom, the bedroom, the living room, the kitchen, the front porch, the dining room, the classroom, detention, hallway, the locker room (where they told their jokes), the studio, the school bus, the firing squad, the dungeon, Barth's Burgery, the library, the basketball dugout, the doctor's office, the dentist's office, the car, the church, Blip's Arcade, and the summer camp. Thats a mouthful. YCDToTV was an incredible show, and although it will never happen, bringing that show back would be the best thing Nick could ever do for itself.

Well, this concludes the Part 1 of an ongoing saga. I know many of you are probably saying "What about Dennis the Menace/Picture Pages/David the Gnome/Double Dare, etc.?" Like I said, my Chronicles are far from over. If you want me to continue, rate this article well. If not, rate it bad. "I Don't Know" what to tell you.
17
Login To Vote!
More Articles From System

9
Quote O' Matic
Stewie: "You know what I do Meg? I spit in your mouth while you sleep. -Stewie"
Family Guy