A truly underappreciated game that isn't looked at enough.
By dalmatianlover
On
Hey, guys, it's me again, the famous and infamous dalmatianlover. To start things off, after reading NLogan's article about the McDonaldland playground, it reminded me of how awesome McDonalds' advertising campaigns used to be. Therefore, I was inspired to write an article somewhat related to that.

I remember one day in the early 90's I was visiting my cousin. We both had our own NES systems. We tried really hard to get the NES to work this day, but just couldn't get any of the games to work for some reason. We tried Mario, we tried Chip 'n' Dale, we tried Q-bert, but nothing seemed to work. 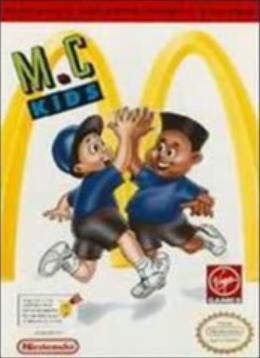 It was then when I saw this cartridge. It had a picture of two kids giving each other a high five, and behind them was the McDonald's logo. Looking at it, I grew curious and decided to check it out. I popped it into the system and turned it on and off a couple times to see if it would work. On my fourth try...BOOM, it worked! 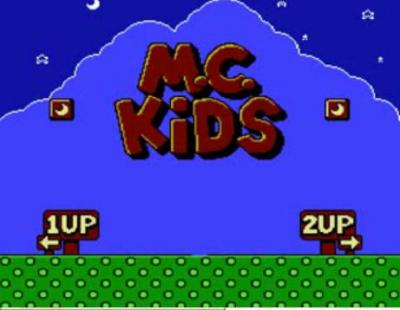 This game I'm talking about, of course, is MC Kids. Now, a lot of people know about this game. Some people like it, but others claim that it sucks. They say that it sucks because they find it to be a Super Mario Bros. 3 rip-off. Thank you for that stunning report, Captain Obvious! Just because a game rips off something from Mario doesn't necessarily mean that it's bad. I happen to like this game. In fact, it's one of my favorite games of all time. So, allow me to guide you through this game, if you haven't even bothered to play it. 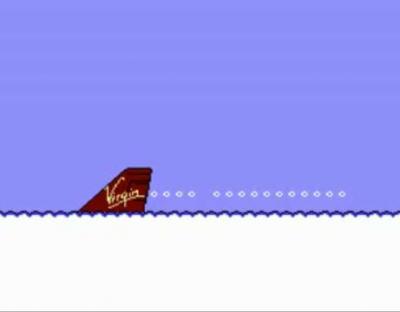 This game was developed by Virgin, which happens to be one of my favorite third party game developers. Originally, this game was released in the UK as "McDonaldland" in 1991, and it came to the US in 1992 as "MC Kids". Anyway, here's a little runthrough of the game. 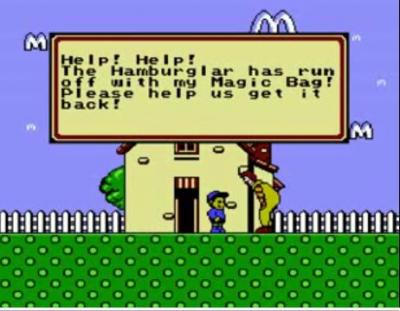 Ronald McDonald has been robbed by the Hamburglar. He stole his bag of magic, and is depending on these two kids named Mick and Mack to help get it back. He has you go through these levels around his clubhouse to find puzzle cards. 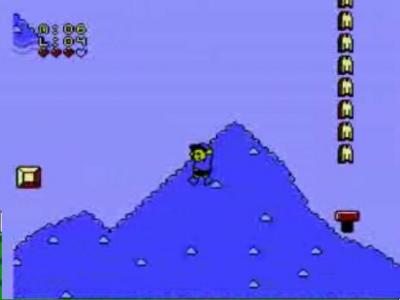 There are some twists about this game making it seem more original. Rather than just completing all the levels and then fighting a boss at the end like in Mario 3, your goal is to collect a certain amount of cards in a world before moving on in the game. Also, unlike in Mario, you can replay levels whenever you want. Collecting 100 arches will take you to a pointless bonus game rather than giving you an extra life (which this game delivers to you continuously since you're going to need them). Rather than jumping on enemies, they can only be killed by getting blocks thrown at them; sometimes, if your lucky, you can get health points from this. I should also let you know that I don't recall any jumping boards, magic zippers, line-up blocks, things that turn you upside-down, or blocks that send you back to the beginning of the level, so how is this related to Mario 3, hmmmm? Anyway, let's get back to the game. 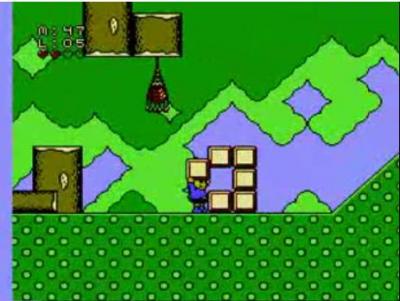 Ronald's world is full of forests and open fields. These levels are full of enemies like snails, birds, giant spiders and lots and lots of gophers. Each world has six puzzle cards that need to be found (when you find all six of them, something special will happen), Ronald tells you to find at least four cards from his world. When you do, he'll tell you that Hamburglar was last scene at Birdie's treehouse. 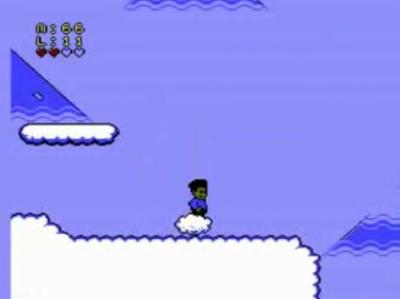 This is when we meet Birdie the Early Bird. She tells you to find five of her cards in her world. Birdie's world is up in the clouds, on icy mountains, or in icy caves. Enemies in this world include bears with shark fins, snow monsters and frozen gophers. Some of her cards are a little tricky to get. 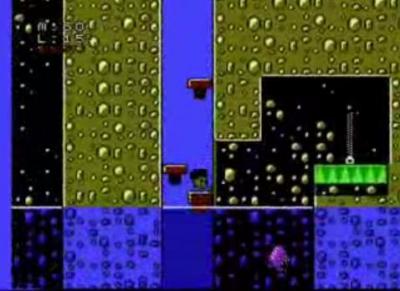 After collecting enough cards, Birdie sends you to Grimace's Highlands. Grimace saw Hamburglar run through and tells you to find three of his puzzle cards, and then later, two more. Grimace's world is up in the mountains and down in the lakes. The mountain levels have a bunch of gophers, moose and these whirly things that I have no idea what the hell they are. The lake levels are a nightmare! There's this pirahna who's always swimming underneath you; he's immune to blocks, and touching him is instant death! There are also these little fish who are not deadly and are vulnerable, but they're a lot worse because they're constantly jumping out of the water! If you haven't played this game before, it'll probably take you hours to find all of Grimace's cards because they're all extremely hard to find and hard to get to. One of the levels in this world is called Fry Kid Falls, which is disappointing knowing that the Fry Kids don't appear in this game. 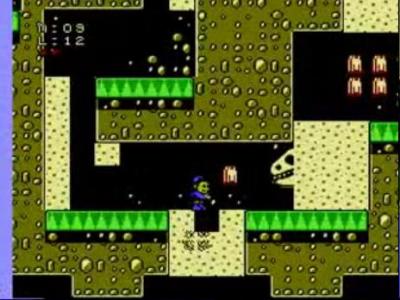 Next, you are taken to Professor's Workshop. If you're unfamiliar with Professor, he's a McDonaldland character who stopped showing up in commercials in like the early 80's sometime. Professor's world has a random layout of levels. One of them is a bridge level with these comets shooting down at you, another is a forest with a fake finish line, and another is a level called Captain's Ship, which I'm assuming belongs to Captain Crook. The rest of the levels involve digging in the sand, which a lot of people state is a rip-off of Super Mario Bros. 2 (which in it of itself is a clone of Doki Doki Panic). I don't know what else to say about this world because there's way too much to explain. 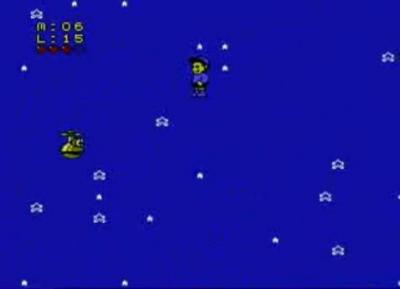 After you've collected five of Professor's cards, he would have by then finished a rocket he was working on, which blasts our heroes up to the moon. Here, they are taken to CosMc's Retreat. Now, I'm willing to bet that 98% of the people who have played this game have said, "Who the hell is CosMc?" Well, I've done some research on this game once, and I read that in the early 90's, there was a series of commercials where the McDonaldland characters went to the moon and met CosMc. I don't recall seeing those commercials, so they must have only been shown in the UK (afterall, that's where this game originated). Now, CosMc's world is on the moon, and it's pretty fun because there's very little gravity allowing you to jump really high, with the exception of one level, which is a cheese cave (As we all know, the moon is made of cheese). All the enemies in this world consist of strange moon monsters. After getting five of his cards, CosMc will tell you that the Hamburglar is hiding in a volcano. 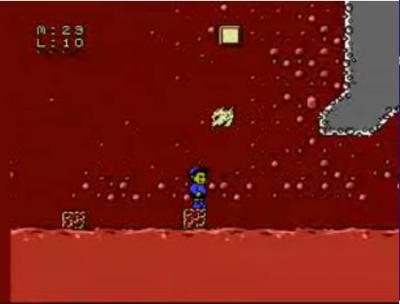 You get to Hamburglar's Hideout, and the magic bag has escaped from him. He tells you to find all six of his puzzle cards (half of them are in other worlds). This world is a nice breath of fresh air because up until now, all the levels have been using the same four musics, but here, we get to hear something different, but don't get me wrong, the music is awesome! Anyway, Hamburglar's world has levels all in volcanos full of burning bridges, lava pits, running belts and total chaos. The only enemies in this world are these lava faces that shoot out of the walls. 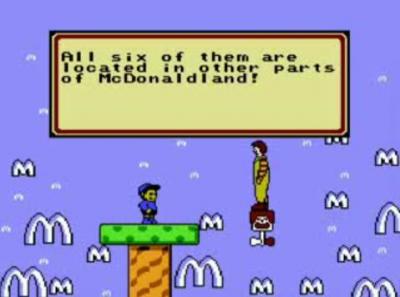 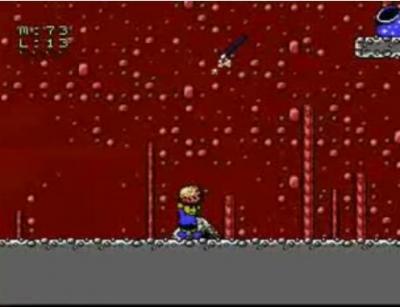 In the final level, the Magic Cave, believe it or not, this is where you fight a boss. Before I found out about this, I thought I was going to fight the Hamburglar at the end. Actually, this final battle is against the Magic Bag, and let me tell you, it is a chaotic battle!

Overall, I gotta be honest with you all. MC Kids is really not that bad of a game. As long as you know what you're doing, the game's really fun. Otherwise, it'll just be frustrating as hell. I really think they should rerelease this game and add some new features to it like a save feature, new mini games, and even more boss battles (that would be awesome fighting Captain Crook, Big Mac and the Fry Kids)! Or better yet, why not make a sequel to it? 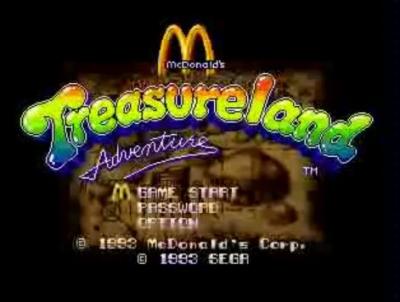 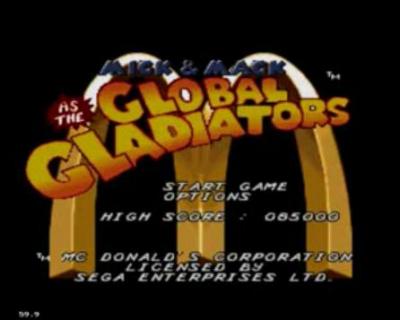 This was one of three games based off of McDonald's. At least as far as I know, there are only three. The other two, "McDonald's Treasure Land Adventure" and "Mick and Mack as the Global Gladiators" for the Sega Genesis, sucked really bad.

Well, there's your added value for you. You gotta look at the positives of these kinds of games and not so much on the negatives. It's hard and frustrating? Well, that's just because you suck at the game! Challenge is one of the many things that makes a game good. It's a Mario rip-off? So what? Pretty much every game in the Mario franchise is an influence on something. There's a lack of McDonaldland characters? Well, that's something you just gotta live with.

Okay, I'm done. I'll conclude by saying that when I play this game, I feel proud to say... 2
dalmatianlover
Video Games from the Vault!
Take a look at some of the greatest not-so-popular video games that I have played.
An unhandled error has occurred. Reload Dismiss