Every great character has a great story
By tbondrage99
On
THE BARE ESSENTIALS VOL. II

Every comic book character has a story that tells you just who they are and what they are about. These are the stories that define who that character is and make fans out of everyone. In this article I'll take a look at a few popular characters and the stories that can only be described as essential. 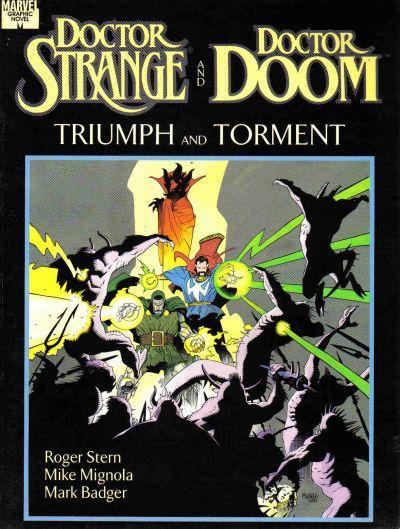 Without a doubt Dr. Doom is one of the greatest villains of all time, and although he has gotten his due several times over the years but stories tell the story of Dr. Doom as well as when he teamed up with Dr. Strange in Dr. Strange & Dr. Doom: Triumph & Torment. 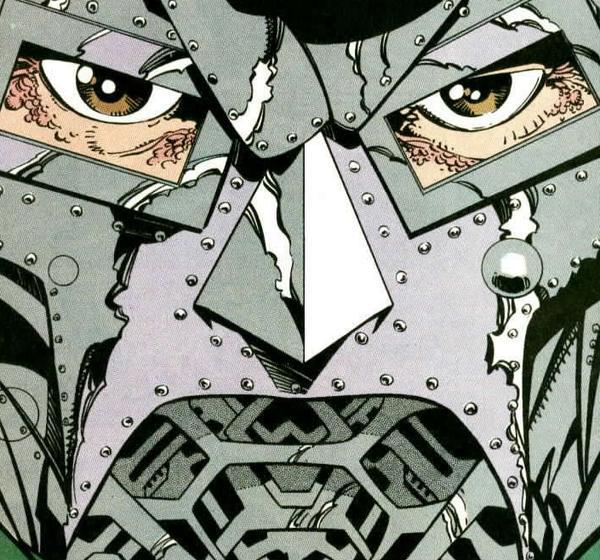 The face of Doom

After winning a contest of The Vishanti, Dr. Strange must help super villain extraordinaire Dr. Doom save his beloved mothers soul from Mephisto and the depths of hell. Dr. Strange and Dr. Doom both storm the gates of the hell battling the hordes of Mephisto's army and their own opposite natures. What this book does better then anything else is show the lengths that the evil Dr. Doom will go to in order to save someone he dearly loves while at the same time showing his absolute evil by trying to betray Dr. Strange the only man capable of helping him in with his task. 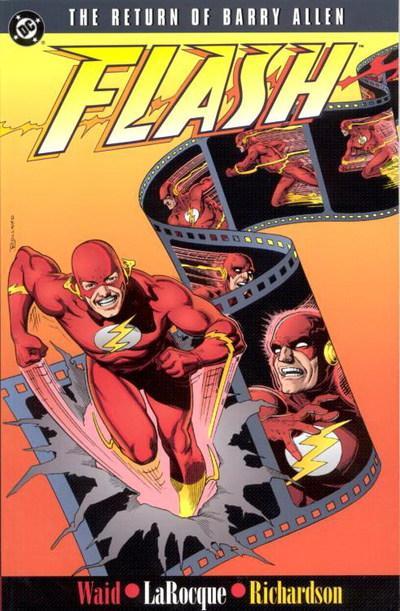 Cover of The Return of Barry Allen trade paperback

Wally West was always unsure of his place as The Flash. After all he was following in the foot steps of Barry Allen who had just sacrificed himself for the entire multiverse who wouldn't have trouble living up to the mantle after that. Eventually Wally started to come into his own as The Flash though and then Barry Allen returned. 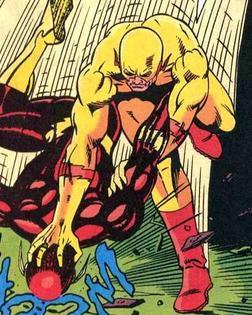 Zoom beats on The Flash

The story has Barry Allen seemingly returning from the grave, which lets face it isn't that uncommon of a thing to happen in comics. Wally of course is more then happy to have his mentor back and soon both Flash's are running together fighting crime. All isn't as it seems however as soon Barry's methods seem more vicious then they had been before and after one particular battle when he pummeled one of their villains all the while screaming "I'm The Flash" When Wally tries to confront Barry about it Barry went mad and started to fight Wally and other speedsters such as the golden age Flash Jay Garrick and Max Mercury. They tried to calm him but Barry kept attacking despite them not throwing a single punch. After the fight Wally became very sad and depressed about what had happened to his mentor and went home vowing never to be the Flash again. It was there however that he discovered Barry Allen wasn't actually Barry Allen but an impostor, Eobard Thawne, better known as The Reverse Flash or Professor Zoom. Wally enraged and with a new purpose quickly puts his Flash costume on once more and went out to fight Zoom. Thawne who was now in full Professor Zoom attire is fully capable of Wally's attack and gives him a beating. Wally knew that he could no longer hold back that he had to go full speed ahead, Barry Allen was dead and he was the heir to The Flash legacy and it was time he lived up to it. Wally started to take the fight back to Zoom and eventually tricked him onto the time treadmill and back into the future. It was here in this story that Wally finally fully embraced his legacy as THE Flash. It was also here that Wally had finally won over comic fans as before this they were calling for Barry Allen to return as The Flash however after wards Wally was embraced. 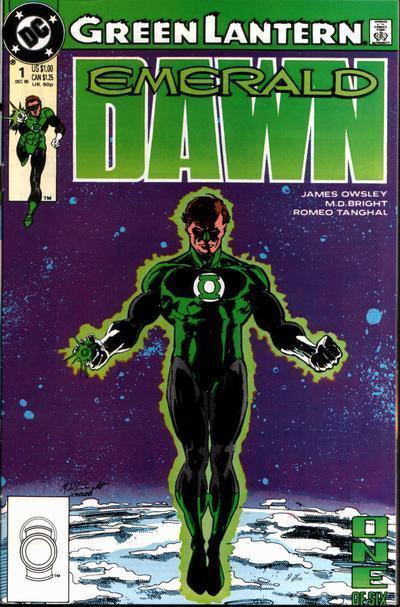 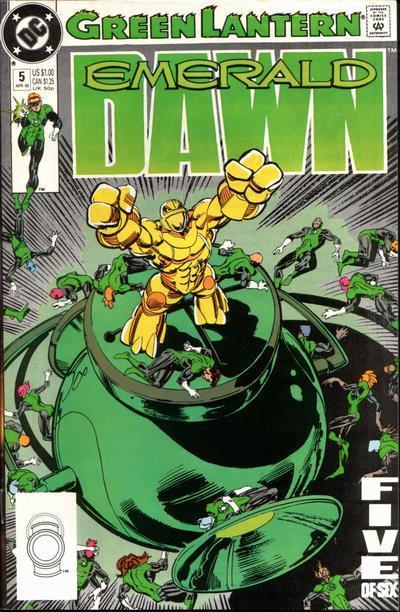 When Green Lantern Abin Sur crash lands on earth he knew that he didn't have much time left and that he had to pass on his power ring, the Green Lantern's powerful weapon that can only be wielded by the fearless, onto the next person. After scanning billions of humans the ring selected test pilot Hal Jordan, who at the time was making one mistake after another in his own life. However now gifted with a power ring Jordan gets a crash course in both how to use the ring and also on what it means to be a Green Lantern. All while this is happening Legion, the villain responsible for the death of Abin Sur and other Green Lanterns has arrived to hunt down Hal Jordan. Hal faces Legion learning the rules of a Green Lantern in battle and breaking every one of them all at the same time. 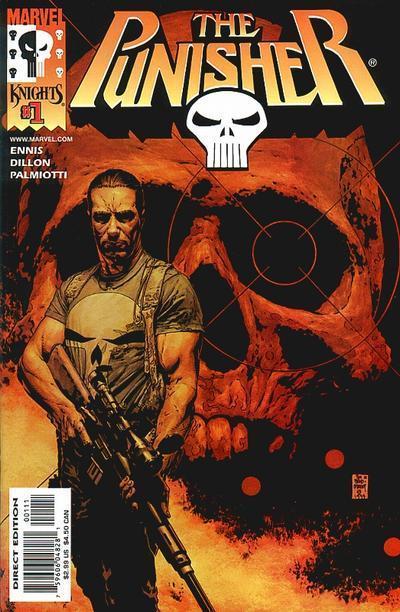 Cover to Punisher Vol. 4 #1
Although he is a popular character since his very first appearance in 1974, The Punisher had several comic series and was generally considered one of Marvels essential characters there was something that good old Frank Castle always lacked and that was a essential story that told everyone what he was all about, finally in April of 2000 The Punisher started a new 12 issue series that would finally deliver what Frank Castle needed. 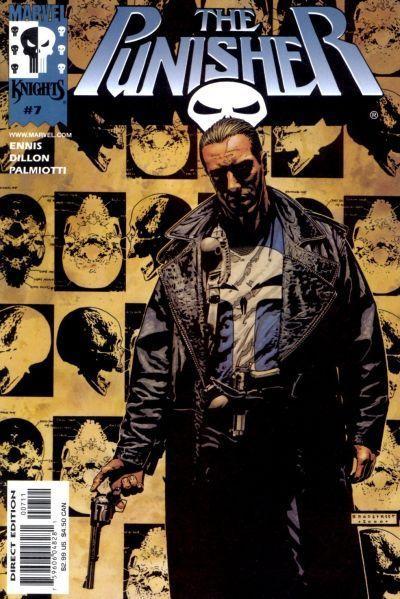 With The Punisher back in New York City he wastes no time in letting the criminal underworld know it by attacking the Gnucci family. All the while bumbling Detective Soap is assigned to find the Punisher and bring him in by the NYPD. This doesn't really work out for the NYPD however as The Punisher convinces Soap to see things his way and gets him to give him more information on The Gnucci family. Eventually after a long battle which saw some of the Punisher gain unwanted friends who are dragged into the fight by the Gnucci's and The Punisher's getting one of comic history's most violent beat downs by The Russian, The Punisher finally prevails and takes down The Gnucci's once and for all. Detective Soap receives a promotion and The Punisher's friends get the stolen Gnucci money. Content with a grueling job well done with several happy endings, a rarity in his life, The Punisher moves on. 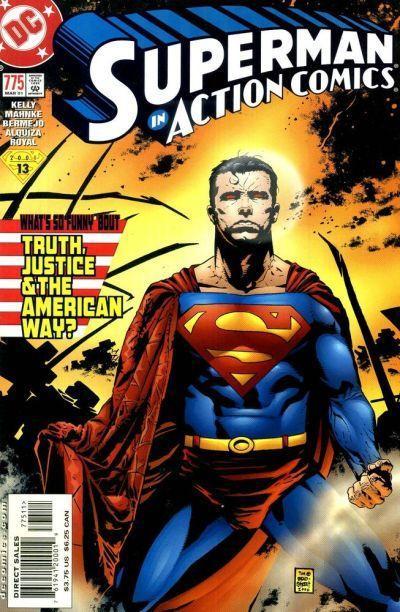 Its all been said before, Superman is old, outdated, boring, a boyscout and is just plain not relevant anymore. Every now and again though the big boy in blue proves that he will always be relevant and why he is one of the greatest super heroes off all time. 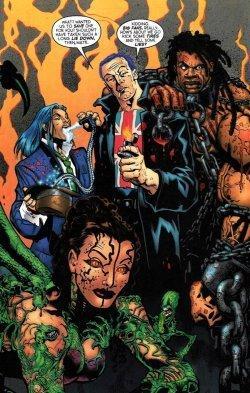 Action Comics #775 also marks the first appearance of a team called "The Elite" and their leader Manchester Black. The team had become incredibly popular by killing there super villain foes instead of merely defeating them throwing them in prison. They were a super hero team that speaks of today's generation of comic super heroes specifically "The Authority" where ultra violence is the more popular option. Of course their methods don't set well with the grand daddy of all super heroes himself, Superman. Superman tries to teach The Elite his approach to solving problems yet despite his track record they refuse. The public starts to side with The Elite. Yet when he is pushed without any choice with The Elite's actions Superman and The Elite face off with The Elite showing Superman who the top dogs now were. Eventually however the Man of Steel shows Manchester Black and the rest of The Elite what it takes to truly be a hero. 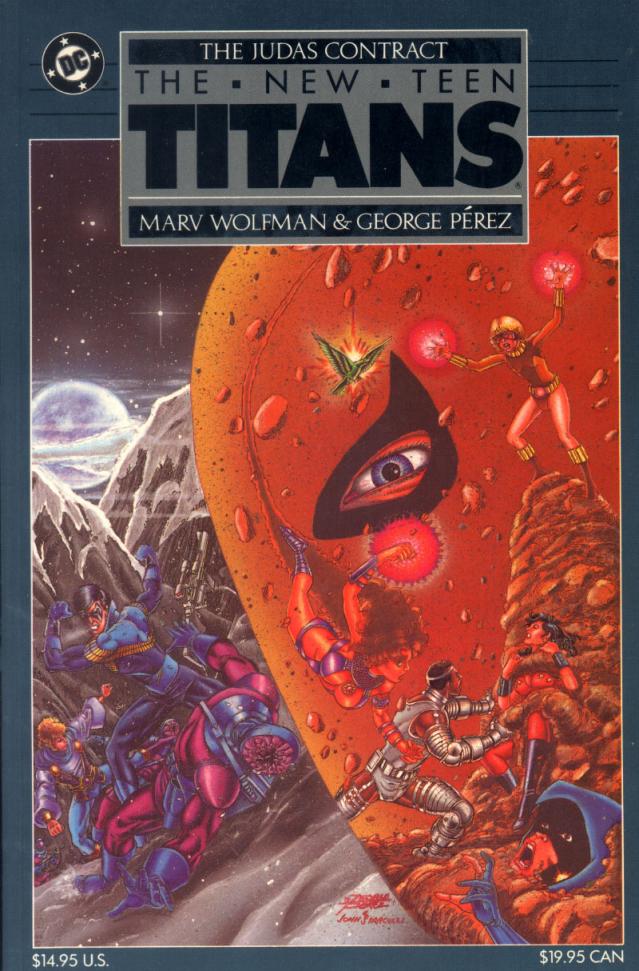 Back in the early 1980's The Teen Titans and The X-Men were usually the best selling books for there respective companies and often trading spots with each other for the top selling book in the industry. During this time everything happening in Teen Titans was leading up to their one defining moment. The Judas Contract. 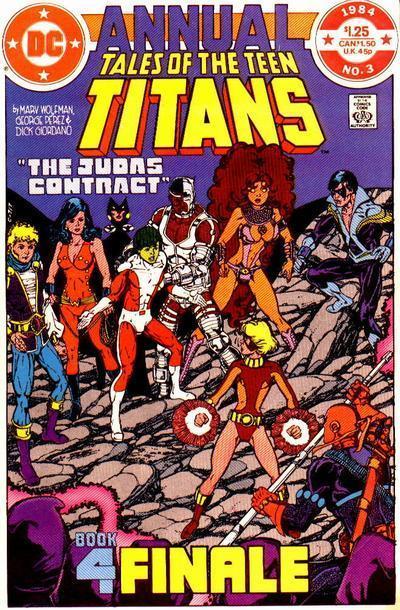 The seeds for this story were planted over a year before it even began, when the earth-manipulating Terra joined the team. She was a immediate hit with comic fans and the Teen Titans themselves. She had even become so popular in her brief stint that no one could of suspected what was going to happen next. While on the team Terra gathered information about each and every member, there strengths and weaknesses, there true identities and there day jobs. No stone (no pun intended) was left unturned. Has the storyline starts its revealed that Terra is a traitor to the team in cahoots with there arch enemy Deathstroke The Terminator. Now knowing exactly when, where and how to strike they make there move as they take out every Titan one by one save Dick Grayson who recently gave up the Robin mantle. After his attack he was from the danger presented by Deathstroke and Terra, Grayson makes plans to save his team mates and reinvents himself as he dons a new costumed identity, Nightwing. Eventually Nightwing saves the Titans and they defeat there adversaries but not before one of the Titans are killed and all are wounded both psychically and far worse emotionally epically Changeling (now Beast Boy) felling the sting the worse as he had been in love with Terra. At the end of the story The Teen Titans move on, they have no choice but to do so, but there innocence is forever lost. 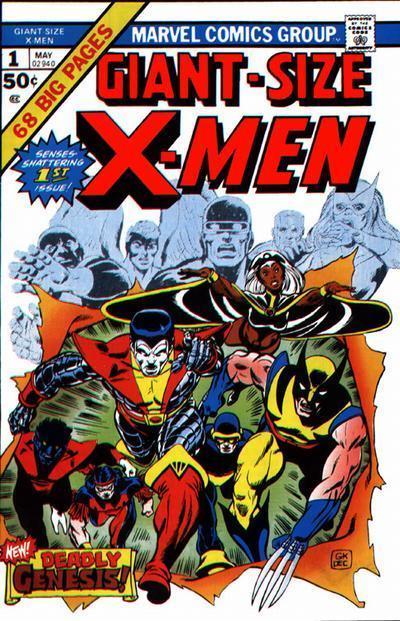 During Marvel's early days The X-Men weren't overly popular and their greatest enemy wasn't as much Magneto as it was the constant threat of cancellation. The book sold so poorly they even went into reprints. That all changed in 1971's Giant-Size X-Men #1. 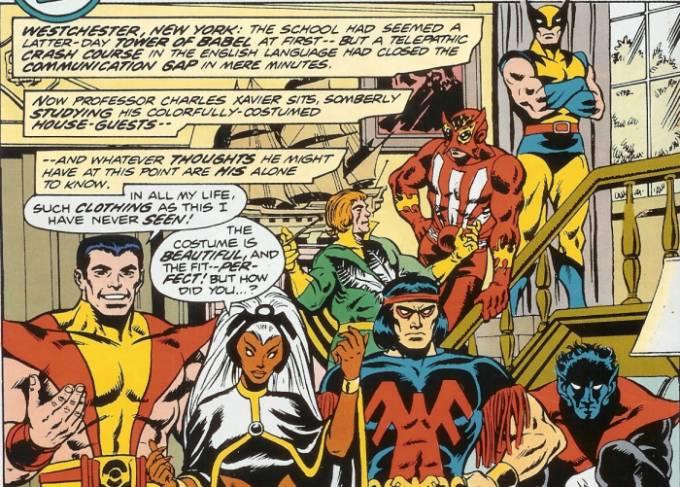 The X-Men's, who's roster now consists of Cyclops, Jean Grey, Angel, Iceman, Polaris and Havoc are captured on the island of Krakoa after a mission gone wrong. Only Cyclops is able to escape and returns to Professor X to inform him on what has happened. Professor X in turn quickly creates a new team to rescue the old one. The new team consisted of Banshee, Sunfire, Storm, Thunderbird, Colossus, Nightcrawler and Wolverine. Lead by Cyclops the new team make there way back to Krakoa and rescue the older team, after the rescue however the X-Men learn that the Island is actually a mutant. After defeating Krakoa the team destroys it by having Polaris shoot it off into space. The team then returns with the now thirteen members and questioning there futures with the team. 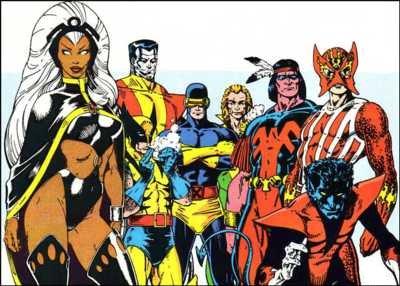 With those seven The Bare Essentials Vol. II has been completed. Of course as we should all know, these characters and the characters in Vol. I all have more than just one essential storyline otherwise they still wouldn't be so popular today. In Vol. III, which will come at a later non-set date when I'm bored much like the first two, I will revisit some of the characters in Vols. I and II as well as some more new ones. I haven't even touched a lot great characters yet. So until then have yourself a good one and in case you missed it check out Vol. 1, the link is provided below.

5
Quote O' Matic
Lloyd Dobler: "One question: do you need...someone or do you need me?...Forget it, I don't really care. -Lloyd Dobler"
Added By: System
Say Anything...
An unhandled error has occurred. Reload Dismiss