A look at two short-lived versions of a real American hero.
By Captain_Retrograde
On
For the subject of this second Also-Rans, we look at the two unsung incarnations of "America's movable fighting man" from the mid-1990's, known as, respectively, G.I. Joe: Sgt. Savage and the Screaming Eagles, and G.I. Joe Extreme.

As the saying goes, 'age before beauty'.

Part I: Sgt. Savage and the Screaming Eagles
In late 1994, after the 3-3/4" scale G.I. Joe: A Real American Hero line ended, Hasbro decided to try out a companion series to their previous hit. From yojoe.com:
"Set within the mythos of that existing toyline, this new 4" line introduced Sgt. Savage, a time-displaced World War II hero battling the evil General Blitz and his I.R.O.N. Army. With artwork by the inimitable Joe Kubert, and a half-hour cartoon episode packaged with a Sgt. Savage figure, this line was meant to open a new door into the universe of G.I. Joe." 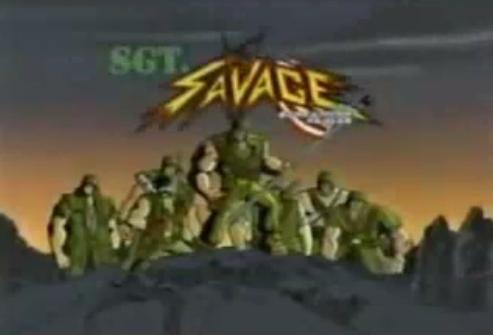 Said cartoon was titled 'Old Soldiers Never Die', was produced by Sunbow (who produced the 80's cartoon), animated by AKOM (which worked on early seasons of The Simpsons, Batman: The Animated Series, and X-Men: The Animated Series), and featured many of the voice actors who lent their talent to the early-90's DIC animated take on G.I. Joe. It also established a link to the prior Sunbow/DIC continuity via the inclusion of the characters General Hawk, Lady Jaye (a blonde in this take), Doc, and Cobra Commander (in a sequence reusing DIC footage). 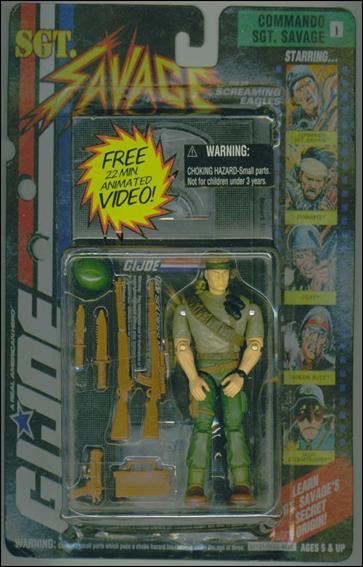 The toys themselves differed in construction from their smaller bretheren mainly in the replacement of the o-ring with a ball-and-socket system, and were now around 4.5" tall in height. The two only waves consisted of 13 single-carded figures (including four versions of Sgt. Savage and 3 of his archenemy General Blitz), one mail-away figure (a desert camo Sgt. Savage), three vehicles (two with drivers, one of which was a pilot Sgt. Savage), and one 12" Sgt. Savage figure compatible with Hasbro's Hall of Fame line. As mentioned before, the packaging art was done by legendary comic book illustrator Joe Kubert, who fittingly enough is well-known for his work on DC's war comics. 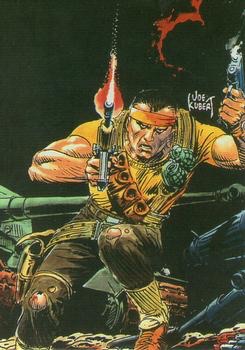 Part II: G.I. Joe Extreme
In 1995, Hasbro, in an attempt to revitalize the G.I. Joe brand--a veteran line in an increasingly-competitive boys toys market--handed the job to their then newly-acquired subsidiary, Kenner. The result was a new take on Joe as if Rob Liefeld (the Ed Wood of the comic book artist community) had redesigned it. The series saw a new team of Joes in the future put together by CIA agent Mr. Clancy in order to stop the machinations of the terrorist organization S.K.A.R. (Soldiers of Khaos, Anarchy, and Ruin).

The new Joes consisted of their field leader Lt. Stone; Sgt. Savage, the only connection to the Sunbow/DIC continuity and his one-shot video; Mayday, their helicopter pilot; Ballistic (later Eagle Eye), their sharpshooter; Freight, their demolitions expert; Harpoon, their Navy SEAL; Black Dragon, the token ninja; Metalhead, their communications and computer expert; and Quick Stryke, an ex-S.K.A.R. soldier who defected to the Joes. All their vehicles and equipment were designed by their resident scientist, Red McKnox. The comic books published by Dark Horse Comics also featured three additional Joes, in the form of Tracker, Short-Fuze, and Tall Sally.

S.K.A.R. was led by Iron Klaw, who in his secret identity is Count Von Rani, leader of the small Eastern European country of Kalistan. His top lieutenants are his right-hand woman Steel Raven; the pyromaniac Inferno; Wreckage, a former U.S. soldier turned into a hulking, rage-prone super soldier; and Rampage, an arms manufacturer/dealer who can turn into a green, grotesque creature. Aside from S.K.A.R., the Joes also went up against rogue marksman the Silencer and anti-globalist terrorist Red Scream.
The toyline consisted of seventeen figures and six vehicles/playsets, and the figures themselves were a radical departure from the norms of Joe. 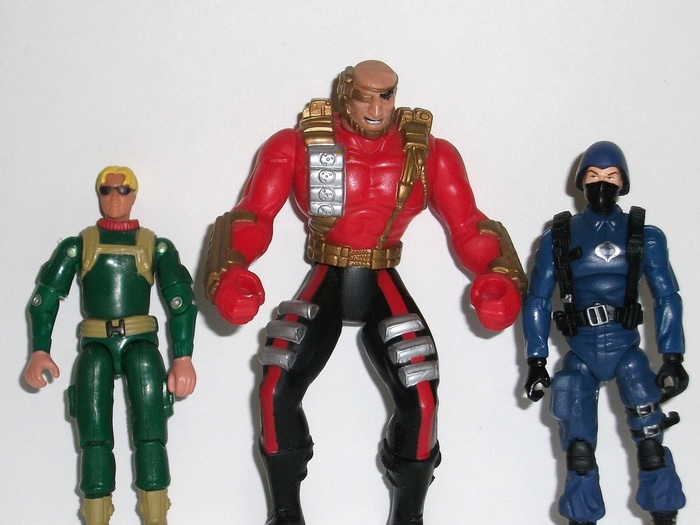 The figures were now 5" tall, which while allowing a greater level of detail sacrificed articulation for special gimmick features. Figures of Mayday, Rampage, Wreckage, and Quick Stryke were produced but never released, though carded samples of Wreckage and Mayday do exist. 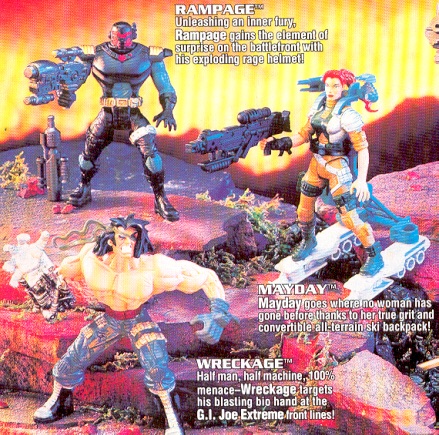 Additional media for the line included an animated television series, which lasted for 26 episodes from 1995-96 and featured more of the Ocean Group voice talent who lent their voices to the DIC cartoon and the Sgt. Savage special; and the two aforementioned comic book series published by Dark Horse, consisting of a four-issue miniseries written by veteran Batman writer Mike W. Barr and an ongoing series cancelled after four issues. 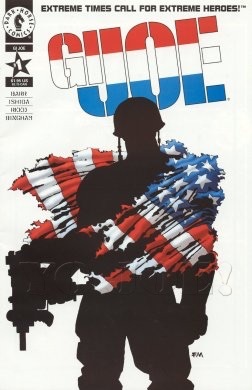 The cartoon, in additon to featuring live actors in parts of the opening sequence, also brought back the 'Knowing is Half the Battle' public service announcements at each episode's end.

Why Short-lived?
Ultimately, the real reasons for both lines floundering was a combination of fan apathy and the new figure scaling, which ensured that either line didn't live up to the success of A Real American Hero (and Hall of Fame to an extent). Sgt. Savage lasted only one wave, while Extreme lasted two--both however had miserable sales.

Both series do have their cult followings, and molds and characters from both have appeared in modern Joe lines:

1. The ski harness of Mayday ended up being used by Kenner for their Batman: The Animated Series line, as an accessory for their 'Ski Blast Robin' figure from the line's "Crime Solvers" subset. 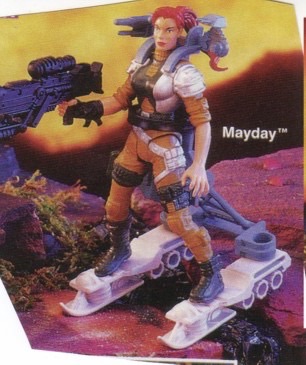 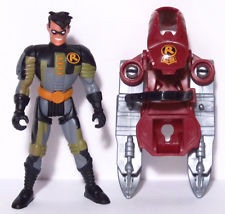 2. Accessory molds from the Sgt. Savage line turned up in the New Sculpt Era of the 3-3/4" G.I. Joe line, mainly in 2002's 'G.I. Joe vs. Cobra' (two of the Sound Attack weapons, which came with Shipwreck and Snake Eyes, respectively), and in the 2007 'Tanks for the Memories' exclusive figure set from the G.I. Joe Collectors Convention of that year.

3. Mouse, the codename for one of the Screaming Eagles from the one-shot cartoon, was given to a character in 2013's 'G.I. Joe: Retaliation' film, where he was portrayed by Joseph Mazzello.

4. Also in 2013, as part of the inaugural wave of the G.I. Joe Collectors Club's Figure Subscription Service, an Iron Klaw figure--based on an unreleased prototype from the 25th Anniversary G.I. Joe line--was released in the wave's fourth shipment. 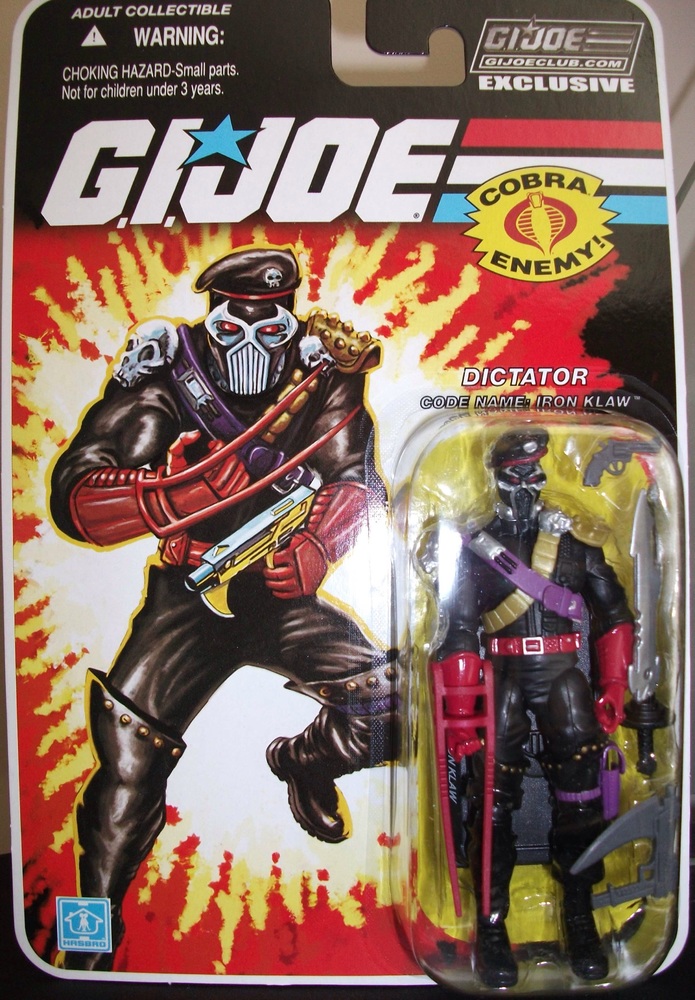 I never really owned a lot of either incarnation of Joe--none at all, actually--but I have been lately finding samples of each series as I go about my collecting. I have seen the Sgt. Savage special on Youtube, and I also plan to check out the G.I. Joe Extreme cartoon (which I have heard was decently-recieved by fans) as part of my second custom-made Saturday Morning cartoon block. Like many fans out there, I hope that the G.I. Joe Collectors Club will find a way to revisit either line. Me personally, I hope that Shout Factory, the current lisencers of GI Joe cartoon DVDs, finds a way to release all of Extreme in a 'complete series DVD set' format, preferably with the Sgt. Savage special included as an extra.

Both series should get a second look, one I encourage you all to give. To paraphrase General Douglas MacArthur, obscure soldiers never die--they just remain faded from view.
6
Login To Vote!
More Articles From Captain_Retrograde