Twisted Metal From 1 To Head On!
By ThatTaggerLoki
On
When the PS one first came out & the game boxes were big and tall, Sony Interactive Studios America / SingleTrac spawned a game called Twisted Metal! This game was originally going to be called Hi-Octane. They changed the name to Twisted Metal to avoid confusion from a game of the same name & type of game play released the same year. 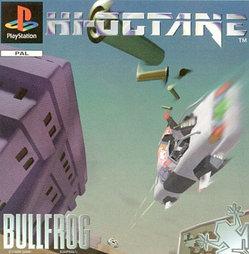 I first found out about this game when I skipped the first 2 classes in high school, we went to a friends house and I played Playstaion for the first time, and the second game I played was this game, and we played it most of the time! From then on I was hooked! This game was thought of wile the creators were sitting in traffic. 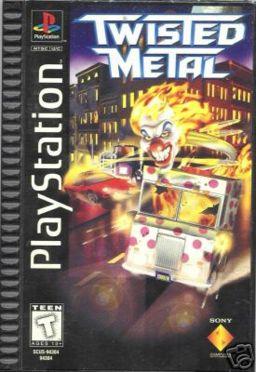 When done and sent to Sony they wanted it to be a pizza delivery game!The Creators were hard headed and told them no, and because of this Twisted Metal was made.
Originally the game was planned to feature live-action ending videos for the character's endings, but they were cut off midway through development and replaced by text-based endings. Mostly because Sony didn't like them and thought they were sexist and didn't work, even though most of the text endings remained faithful to the video endings, though a few are slightly different like Sweet Tooth's, while others portray even different motivations like Thumper's. The videos were included among the bonus features of the PlayStation 2 port of the original PSP game Twisted Metal: Head-On.

The game's plot centers around a man named Calypso, the host of a vehicular combat tournament called Twisted Metal. He promises to grant the winner of the tournament anything he or she desires, without any limit of availability or even reality. The game's story takes place on Christmas Eve, 2005 during the 10th annual running of Twisted Metal taking place in Los Angeles.

When turned in to Sony for the final approval, they wanted them to add better graphics, but the developer didn't have time to do so, so they can make the release date of November 5, 1995! They got horrible rating's from testers ( it may not have been testers, im not sure the exact name, but the people that demo the game ). They original target demographic was gamers that enjoyed fighting games. With all the bad reviews they thought it was a dud! To there surprise when it came out they ended up winning game of the year!

Now the game was composed of 12 Drivers, and 1 Boss.
The cars & drivers were as fallowed:

The Grim Reaper drove a black motorcycle with a sidecar named Mr. Grimm - Special Weapon was Death Spawn - screaming soul, most powerful attack in the game

the levels were fun, some were easy and some were not so easy! but the levels were the best part with health fillups that looked like a 2 sided ramp with 4 post and it sent bolts to your car and refilled it. the levels consisted of Arena, Warehouse District Warfare, Freeway Free For All, River Park Rumble, Assault on Cyburbia, Rooftop Battle where you fought Minion! 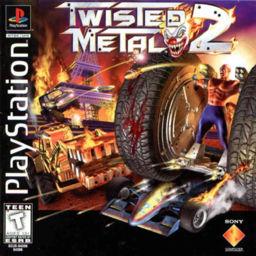 This time you went all over the world to fight. Places like Los Angeles "Quake Zone Rumble", Moscow "Suicide Slide", Paris "Monumental Disaster" ( where you could blow up the Eiffel Tower), Amazonia "Fire Walk" (where you fought minion),New York "The Big Leap", Antarctica "The Drop Zone", Holland "Field of Screams", Hong Kong "Hong Kong Krunch" (where you met the new boss Dark Tooth), along with these Bonus two player levels. Suicide Swamp taken from the other fun game JetMoto 2.. 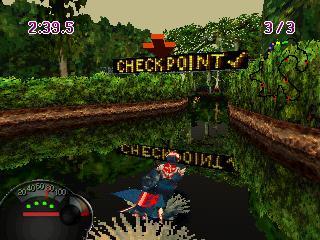 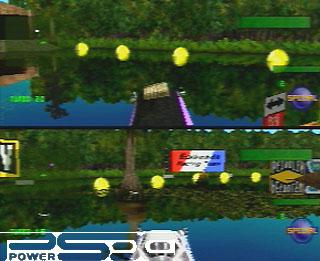 Also had Assault on Cyburbia & Rooftop Battle both levels from the first one. This one if a fan favorite as well as developers favorite. Also so with a new game came new players, Twister ( an Indy car that the special move was a Tornado), Shadow ( a hurst that the special move was a souls shadow that came out of the back), Mr. Slamm ( a front loader with the special move the grab and slam), This one also you could play as minion with a unlockable code. The Original thought for Twisted Metal 2 was to make them flying cars. Well it looks like this was a good thing they didn't! There also was another game that was released in 1998 Called Vigilante 8 witch was similar to the Twisted Metal series and also spanned a sequel a year later called Vigilante 8: Second Offense. but didn't take off as well, and ended its run there. 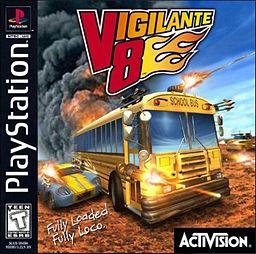 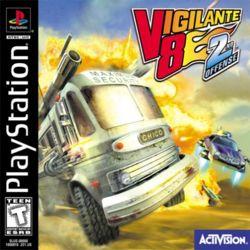 Safe to say Twisted Metal was here to stay. Now on October 31 1998 Twisted Metal 3 comes out, but this time it is put out by a different developer 989 Studios. 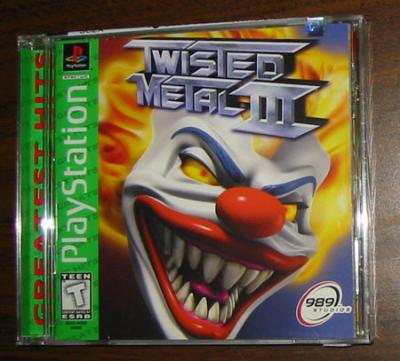 This one got totally done from the ground up, but the basics weapon pickups and advanced attacks were kept. This game is the one that got Twisted Metal in to the movies! In 1999 it was being played in Big Daddy, and in 2000 you can see it being played in the movie Bring It On. This game also introduced a couple of new contestants. Auger (a crane cab with oil drill at front), Club Kid (a smiley face covered Mini Cooper), Firestarter (a flame painted hotrod), Flower Power (a hippy Volvo PV544, looks like a VW bug but with a longer front), And the new head boss Being Primeval (a large off-road vehicle).

With keeping the idea of the "world tour" the levels were Hollywood, Washington,Hangar 18, North Pole, London, Tokyo, Egypt, Blimp. With this game came a rocking gameplay soundtrack! with Metallica Fuel, and 4 Rob Zombie/ White Zombie ( if you want to get technical 1 White Zombie and 3 Rob Zombie) songs! 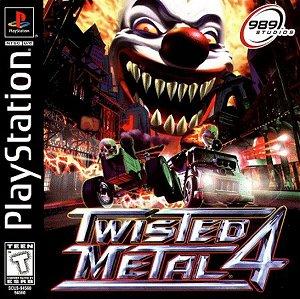 Twisted Metal 4 was overhauled completely, new vehicles. There was only a few that returned from the previous games. here is a list of the cars that appeared in Twisted Metal 4, Including Rob Zombie & Calypso (the de-throwned "creator" of twisted metal contest) as a playable characters.

The Joneses drove a Station wagon

TM4 was adjusted to be much quicker and flexible. It also introduced new features, most of which did not returned in following games like, Expanded weapon repertoire, Save game (TM4 discards the password system of its predecessors and instead allows players to save their progress in the Memory Card. The data allowed a total of 30 different campaigns to be saved, both single and co-op, Create-A-Car (A mode that allows players to create their own car to be used in the game. The mode includes 9 different vehicle types, each with different paint jobs and accessories to use, as well as an unique special attack and a war cry that'd activate when used. It remains to date the only home-console car combat game to use such mode).


Now with the PS2 still new on the market they return the Twisted Metal franchise back to the original developers, and they bring back all the favorite characters from the past. Of course they add some new one like, Brimstone (drove a white El Camino), Crazy-8 (drove a VW Beetle-like car),Junkyard Dog (drove a Tow truck ), Manslaughter (drove a Dump truck), and the final boss Warhawk (drove/flew Helicopter). 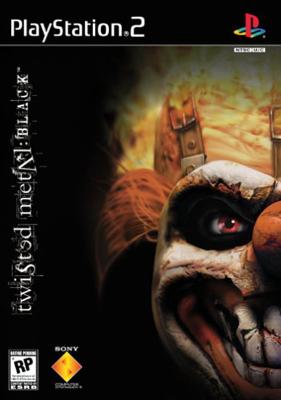 This game was a little different than any of the past games! This game was a Drak game it was stated to be inside of sweet tooth's mind, witch would be the reason everyone was in a mental hospital. Now only 4 months later they released a game for the PSone For more of a "kids" version of the game Called Twisted Metal Small Brawl. There was going to be a sequel to this game called Twisted Metal Harbor City, but they scraped that game when some of the developers died in a plan crash. but was later seen in the Twisted Metal Head on PS2 version. 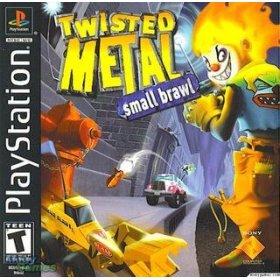 The levels were Playground Peril, Carn o'Maul, Easy Death Oven, MiniGolf Mayhem', Meat your Maker, Gridiron Gore, TreeTop Rumble, Now Slaying with Buster's Lanes, Shock Therapy, Holiday Havoc as unlockable levels! This was not that big of a hit with the fans. Now when the PS2 launched there network adaptor they included a game just of online play. That game Was Twisted Metal Black Online. 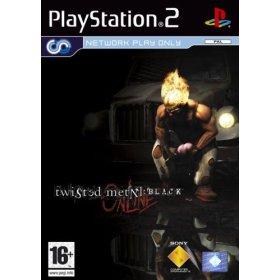 This is the same game as TM: Black with no story line or single player game! There was about 15 characters and only 4 types of ways to play online! Deathmatch, Last man standing, Collector, and Manhunt. In collector you had to go around looking for "artifacts" and at the end the player with the most wins. In Manhunt its one against all, one player would be the hunted and the rest the hunters.This game is a must for all TM collectors.

After TM Black came out there was costumes and toys! The only costume was Sweet Tooth. 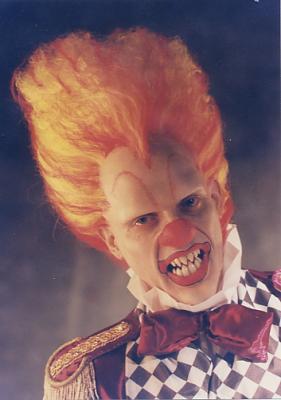 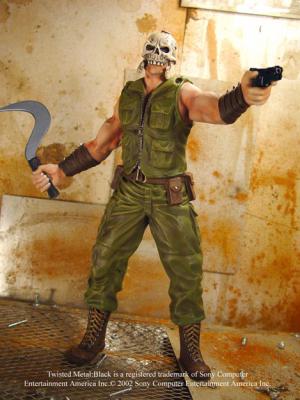 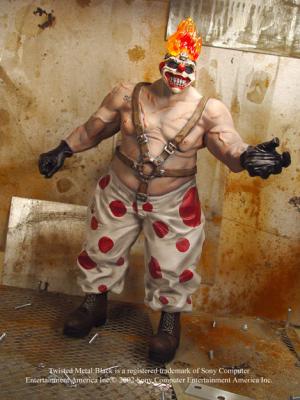 On March 24 2005 they released the PSP TM entitled Twisted Metal Head On. 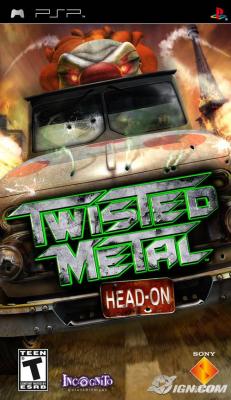 This game was a mix from the past games. It had all the past favorite characters, with the bosses being ATV & Cousin Eddy, Dark Tooth, & Tower Tooth. This game also had little side game during the game play. Three years later the game was re-released on the PS2. 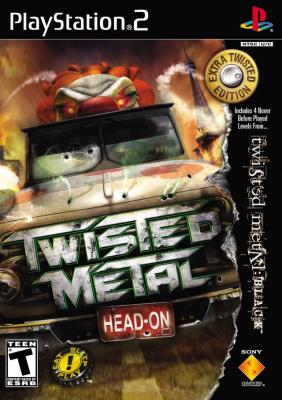 With quite a few extras. One of them being the Lost Levels to the sequel to TM: Black, with playable characters the same as in TMB but have added Manslaughter, 12-Pak, & Gold Tooth. One Being a little factoid hunt about the TM series where you are Sweet Tooth and your in the asylum walking/running around looking for the floating Sweet Tooth heads.One being the lost ending videos to TM1. The Last of the extras is Twisted Metal - The Dark Past witch is a video from the creators talking about the TM series up to Head On, and the things that happened and occurred during that process, and in the PS2 version of the game they say through code that there will be a new Twisted Metal for the PS3. So as far as Twisted Metal the story and legend is not over yet!
24
Login To Vote!
More Articles From ThatTaggerLoki

19
Quote O' Matic
Nancy: "We are the weirdos, mister -Nancy"
Added By: System
The Craft
An unhandled error has occurred. Reload Dismiss