The Games of Tim Schafer

A tribute to one of my favorite computer-game designers
By Borgem
On
Although I've seen many articles written about computer- or videogames on Retrojunk I have yet to see an article concerning the people behind the games. Thus, this article will pay hommage to one of the most brilliant and creative minds in the business: Tim Schafer and four of his best games. 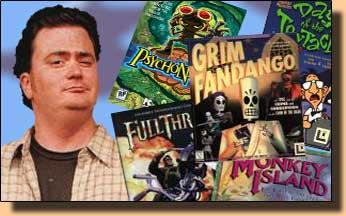 Now for the games (be warned that there are some spoilers here, though nothing that should ruin the games for you if you haven't already played them): 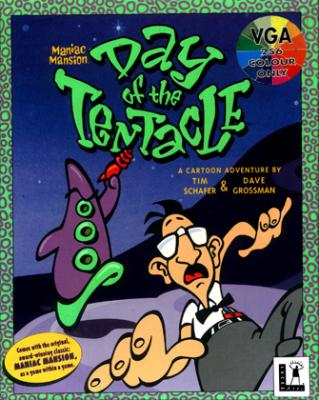 "Day of the Tentacle" (henceforth referred to as "DOTT") was the first game Schafer worked on as the lead designer (along with Dave Grossman). The game, which is a sequel to "LucasArts'" first adventure game, "Maniac Mansion" features caffeinated mad scientists, mutated tentacles, the founding fathers of the United States of America and much, much more. 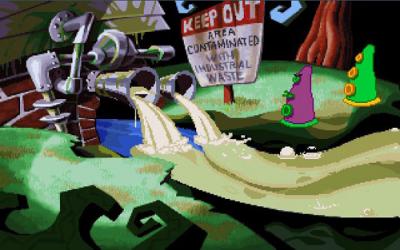 "DOTT" begins with Purple Tentacle, one of mad scientist Dr. Fred Edison's pets taking a sip from the polluted river outside Maniac Mansion (which in this game has been turned into a motel). Unfortunately, this causes Purple to grow small arms on the side of his body, proclaiming that he feels smarter and more agressive he sets out on his new mission to... 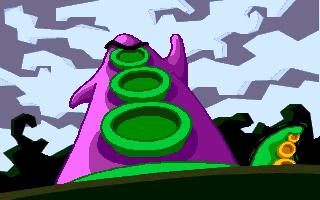 Dr. Fred manage to lock up both Purple Tentacle and his normal brethren Green Tentacle into the basement where his secret lab is, to stop Purple, Dr. Fred decides to kill them both. However, Green Tentacle isn't going to take this and sends his hamster friend with a note to his old pal, Bernard Bernouli (the only protagonist from the original "Maniac Mansion") telling everything that has occured since Purple drank the polluted water. 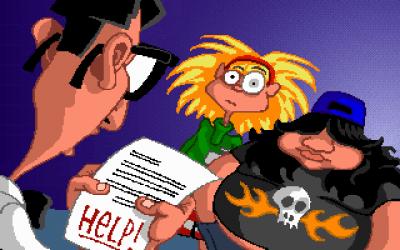 With his friends; spaced-out medical student Laverne and slow-witted rocker Hoagie in tow, Bernard returns to Dr. Fred's place ("Let's split up, commando style.") finds the entrance to the secret laboratory and set both Purple and Green free. 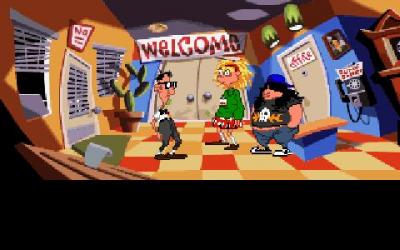 Chuckling evilly, Purple Tentacle jumps away, vowing to complete his quest for world domination. Bernard realises that he's done a terrible mistake and so together with Hoagie and Laverne he goes into Dr. Fred's time-machine; The Chron-o-John, in order to go back to yesterday and prevent Purple from drinking the water in the first place. 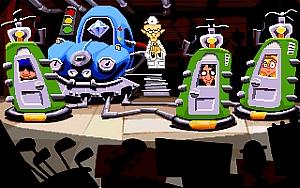 Unfortunately, the diamond Dr. Fred's been using to power The Chron-o-John turns out to be an imitation and so Bernard returns to present time while Hoagie gets stuck in the 18th century and Laverne in a future where Tentacle's have become the dominating life-form. So now, Bernard has to find a way to buy a real diamond while Hoagie and Laverne need to power-up their Chron-o-John units in order to get back home. 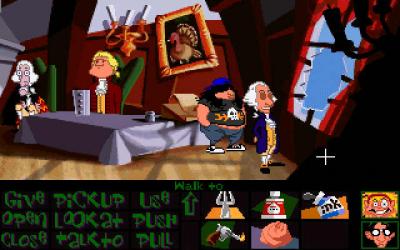 "DOTT" was the first adventure game I played and it's still one of my absolute favorites. The puzzles are well-integrated into the game itself and the time-traveling aspect gives a new dimension to them. Example: In order to get Laverne out from the quamquat tree she's been stuck into in the future, Hoagie will have to paint the quamquats red in order to convince George Washington that it's in fact a cherry tree. George will happily prove his manliness by chopping down the tree, thus freeing Laverne (who immediately ends up in the kennel). 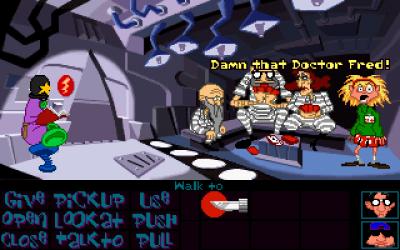 Of course, one can't write about "DOTT" without mentioning it's lead villain: Purple Tentacle is one of the all-time greatest game adversaries and can easily be compared favorably to more well-known bad guys such as Ganon or Bowser. 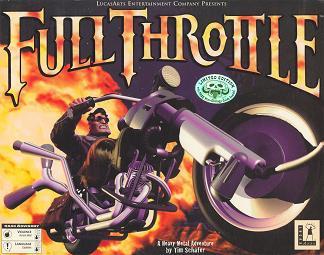 "Full Throttle" is the shortest and easiest of all the games Schafer created but on the other hand it's just so damn awesome that it's briefness really doesn't matter.

"Full Throttle" takes place sometime in the future. Here we meet Ben, leader of a biker-gang called The Polecats. When Malcolm Corley, one of Ben's friends and owner of Corley Motor's the last motorcycle factory in America is brutally murdered, Ben is accused of the crime. With his gang in jail, Ben has to find the real killer and clear his name. 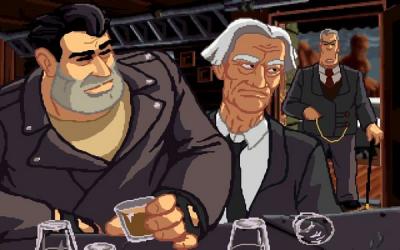 Ben is a different kind of "LucasArts" hero, he's not a goof like "Monkey Island's" Guybrush Threepwood, nor is he an ordinary guy like the main characters in "The Dig". No, Ben is tough and isn't afraid to use threats to get the information he needs.

There are several action-elements implanted in "Full Throttle", for example a huge part of the game takes place on an abandoned mine-road where Ben has to fight members from the other biker-gangs; The Rottwheelers, The Vultures and The Cave-Fish. 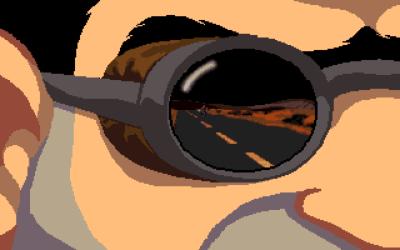 One of "Full Throttle's" greates assets is the sound; the soundtrack by "The Gone Jackals" fits the game perfectly and the voice-acting is nothing short of brilliant, the late Roy Conrad's voice makes Ben into one of the most badass game heroes ever created and Mark Hamill is appropriately slimy as the villainous Adrian Ripburger. In fact, when I first played "Full Throttle" I couldn't believe that the guy who played Luke Skywalker could sound so evil (keep in mind that at the time I wasn't aware that he had also voiced The Joker in the animated "Batman" series). The other voice-actor's are really good too but it's Conrad and Hamill who stand out. 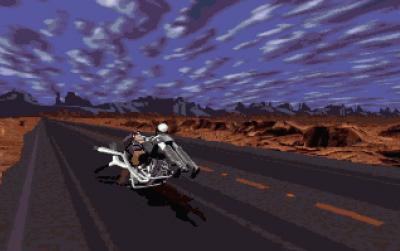 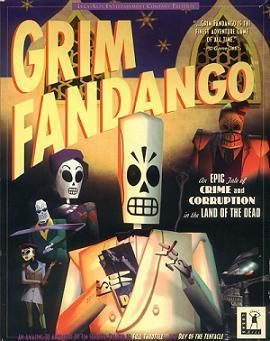 Schafer's last game for "LucasArts" was arguably his best, set in The Land of The Dead, Grim Fandango mixed a small dose of Aztec mythology with influences from noir movies like "The Maltese Falcon" and "Casablanca" the result is one of the most creative and lively settings for a game, despite the fact that basically all the people inhabitating it are dead. 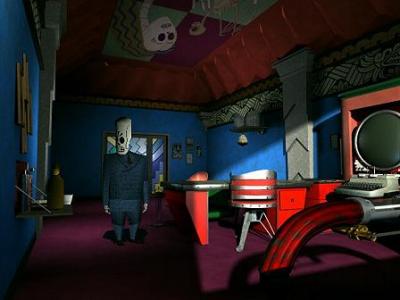 However, despite it's appeal, most of the dead wants to get out of The Land of The Dead and into Paradise. However, in order to do so you have to get a travel package from The Department of Death, what kind of travel package you get is all dependable on what kind of life you had. If you were, basically a saint you get to go straight to paradise on "The Number 9" expresstrain. However, if you were a really rotten bastard you have to stay at The Department of Death and work of your dept to the powers that be.

Manuel "Manny" Calavera is one of those poor unfortunate souls, once he was the department's top salesman, but know all the clients he gets are scumballs while the new hot-shot salesman, Domino Hurley gets the best clients. 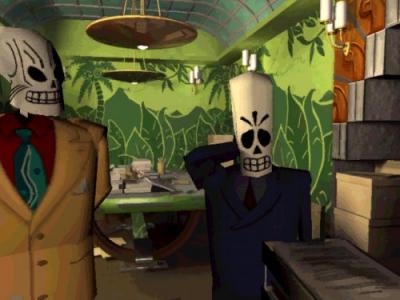 Determinded to get back on top, Manny decides to steal one of Domino's clients, the beautiful and saintly Mercedes "Meche" Colomar. However, when he tries to sell her a ticket on "The Number 9" her records show that she hasn't deserved it. Manny starts to think that there's something rotten at "The Department" and soon finds himself involved in a global death-conspiracy which will take him four years to resolve. 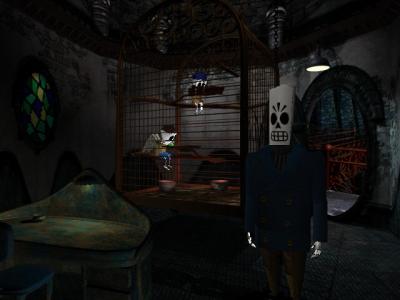 If you are only going to play one game by Schafer I think it should be "Grim Fandango". True, the third and fourth years aren't as funny as the first and the second and the plot does have some holes but otherwise "Grim" is a true masterpiece filled with intriguing characters, such as Glottis the huge demon who becomes Manny's chaffeur and best friend. 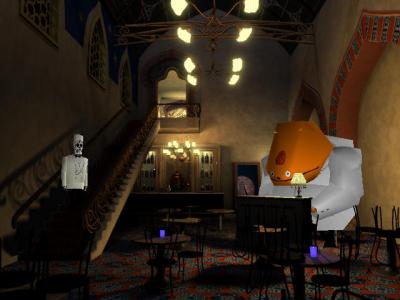 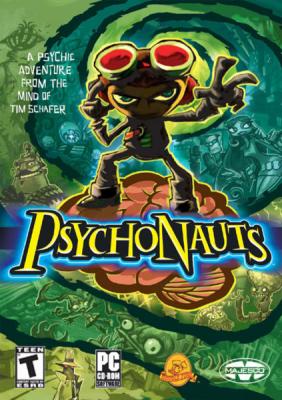 With "Psychonauts" Schafer proved that his talents weren't confined to one particular sort of game, giving us one of the best platform-games yours truly have had the pleasure to play in the recent years (not that I've played many).

"Psychonauts" takes place in a world much like our own except that some of it's inhabitants possess mental powers. Most of the game takes place at a training- camp for psychic children. The purpose of the camp is to teach these children how to use their powers for the greater good, or more precisely to become Psychonauts- agents who venture into the minds of people to battle their fears and traumas. 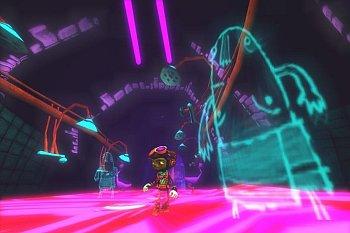 The main character, a ten-year old boy named Razputin (Raz for short) has run away from the circus he lived at previously to enroll in the camp. Soon, Raz discovers that something strange is going on at the camp, children have been found with their brains missing (though somehow still alive). Intrigued, Raz begins an inquiry of his own and soon discovers the horrible truth: The brains have been stolen by a mad dentist named Dr. Loboto, who, together with one of the camp's coaches are planning to use them to power their psychic death-tanks which they will use to conquer the world.

In order to retreive the missing brains and put a stop to Dr. Loboto's plans, Raz must enter the minds of the people he meets on his quest. As one should except these minds differ greatly from each other, one of my favorite's are the mind of the paranoid security guard Boyd which looks like a 1950's suburb drawn by artist M. C. Escher and populated by sneaky governemnt agents (who vainly tries to pass themselves of as grieving widows, construction workers and so on). 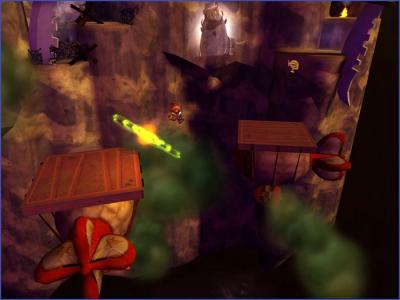 If there's a downside to "Psychonauts" it would be the final stage, which is just too damn hard (and not in an entertaining way) otherwise it's a great game.


Finally, I'd like to say "thank you" to Tim and hope that he'll create many more excellent games in the future.

And thanks to all of you who took your time reading this article.
7
Login To Vote!
More Articles From Borgem