Tales of the Schattenjäger

A look at the 'Gabriel Knight' games
By Borgem
On
Welcome, dear reader to my latest article. This time I thought that you and I should take a look at another one of my favorite adventure game series, namely 'Sierra Entertainment's' 'Gabriel Knight' trilogy.

Created by Jane Jensen, all three games in the 'Gabriel Knight' series features well-developed characters, great storylines and extensive research on a wide range of historical and religious topics.

"But, who is this Gabriel Knight fellow?" I can hear you ask. Do not worry, the answer to this question and many more will be revealed in this article. However, before we begin looking at the games, I'd like you to meet some of the characters. 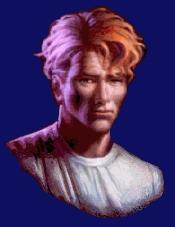 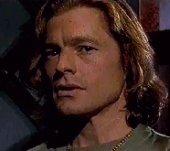 The main character (as if you hadn't figured that out already). Gabriel is the last of the Ritters a family of so-called Schattenjägers (that's 'Shadow Hunters' in english) holy warriors, destined to fight against supernatural evils such as vampires, werevolves and other monsters that threaten an unsuspecting humanity.

What about Gabriel as a person? He's quite a charmer and a ladies man and can occasionally come of as a huge ass. In the end he fulfills his duties as a Schattenjäger admirably and stays loyal to his friends no matter what.

Gabriel is voiced by Tim Curry in the first and third game and played by Dean Erickson in the second. 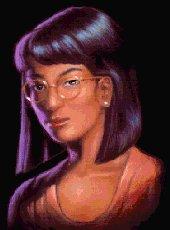 Grace is Gabriel's assistant and the more intellectual half of the duo. As such she is the one who handles all the resarch in the games. In addition to her fine mind, Grace is also armed with a sharp tongue, something that often enables her to leave the usual banter between her and Gabe as the undisputed victor.

Grace is voiced by Leah Remini in the first game, played by Joanne Takahashi in the second and voiced by Charity James in the third. 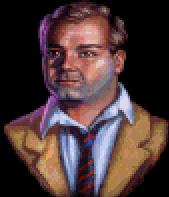 Detective Mosely of the New Orleans Police Department has been Gabriel's best friend since they both were kids (Gabe often calls Mosely 'Mostly' a nickname that irritates the detective greatly). Mosely is a good cop and while he sometimes may have a hard time understanding (or believing in) the things Gabriel goes up against, the Schattenjäger can still count on his help.

Mosely is voiced by Mark Hamill in the first game and by David Thomas in the third.

Now on to the games.


Gabriel Knight: Sins of the Fathers

I dreamt of blood upon the shore of eyes that spoke of sin, the lake was black and deep and smooth as was her scented skin... 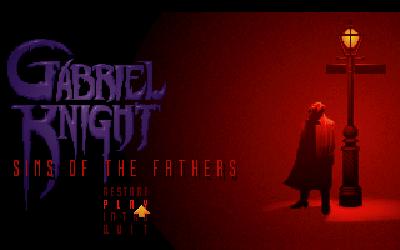 'Sins of the Fathers' takes place in New Orleans, here we meet Gabriel for the first time. He's a struggling young author who owns a (not very succesful) bookstore in the city's french quarters. For several months, New Orleans has been haunted by a mysterious Voodoo-cult that indulges in ritualistic killings, a cult that seems far too elusive and powerful for the police to catch.

Gabriel figures that the murders would be great stuff to base a best-seller on and starts to do some detective work of his own. He soon finds out that the Voodoo-cult is tied to his own family in a tale of forbidden love, betrayal and revenge.

'Sins of the Fathers' was released in 1993 and features gorgeous hand-drawn graphics and great voice-acting. What makes the game really shine though is it's plot. So well-told and fascinating is the story of Gabriel's first adventure that it ranks as one of the best plots ever told in any medium.
Curiously, 'Sins of the Fathers' isn't as plagued (or blessed depending on your point of view) by the so-called 'Sierra Sudden Death Syndrome' as many other of the company's adventure games. Yes, you can die in certain places but those places are few and far between compared to say, 'Space Quest' in which death seems to lurk in every corner.

'Sins of the Fathers' was paradoxically the last game I played in the series, the fact that I already knew about Gabriel's heritage when I started to play it and still got hooked should serve as a testament to what a masterpiece this game is. Definitely one of the best games ever made and one that deserves to be played by anyone with an interest in the adventure genre.


The Beast Within: A Gabriel Knight Mystery

'The Beast Within' was released two years after it's preceedor and featured live-actors, undoubtedly as a result of the whole 'interactive movie' era that was so prominent during the mid-90's. 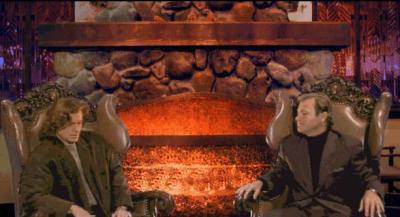 When 'The Beast Within' starts, we learn that Gabriel has moved from New Orleans to the family castle in Rittersberg, Germany to work on his new book (he left Grace behind to watch over the bookstore, though). One night a group of villagers demands to see the Schattenjäger, it turns out that one villager's daughter has been found dead in the woods. The local authorities suspects that it's the work of escaped zoo-wolves but the villagers are certain the girl was killed by nothing less than a werewolf. Although sceptical, Gabriel takes the case (a man has his duties after all) and is soon tangled up in another web of intrigues involving king Ludwig II of Bavaria, a lost Wagner-opera and a mysterious entity known only as 'The Black Wolf'.

In terms of storytelling and characterisation, 'The Beast Within' carries the first game's legacy with pride, all the actors do a good job with the exception of Peter Lucas as Gabriel's benefactor, baron Friedrich von Glower. Lucas is simply fantastic in the role and dominates every scene he's in, making Von Glower into, perhaps the most intriguing character in the trilogy. 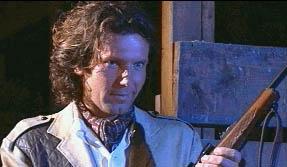 While Gerde, a minor character from 'Sins of the Fathers' returns for a greater role, other, more important characters from the first game are absent, such as Mosely (replaced by the 'amiable' criminal-kommisar Leber) and Gabriel's loving grand-mother (in fact, after the first game the old lady is never seen or heard from again).

In addition the second game is the first one which also let you take control of Grace as she decides to take interest in the case herself, despite Gabriel initially telling her to stay out of it. 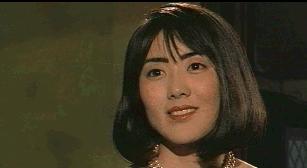 The reason why I don't hold 'The Beast Within' in quite as high regards as 'Sins of the Fathers' is because the gameplay tends to be rather tedious. No, the game is far from easy but there are a bit too many 'click on something and watch a movie' sequences for it to be a complete hit and the part where you have to visit all the museums is something of a drag. Despite these flaws, 'Beast' is still a great game and a worthy sequel to 'Sins of the Fathers'.

The final game in the trilogy and (unless I'm mistaken) the last adventure game released by 'Sierra Entertainment'. In 'Blood of the Sacred...' Gabe's been hired as the bodyguard for the exiled Prince James's of Albany infant son. It turns out that the prince is threatend by a group of supposed vampires that may come and kidnap his progenity.

Of course, Gabe screws up and has the kid nabbed right under his nose. Our hero still manages to be resourceful enough to follow the kidnappers to the remote french village Rennes-Le-Chateau and is soon mixed up in a two-thousand year old drama involving hidden treasures, ancient conspiracies, and much more.. 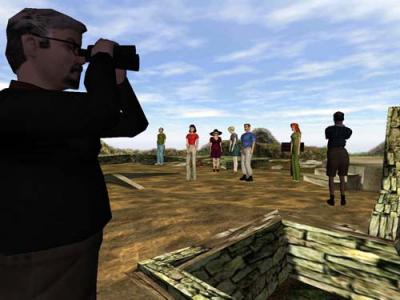 As I mentioned earlier, I played the games in reverse order, in other words, 'Blood of the Sacred...' was the first game I bought and played in the series (mainly because it was so much easier to get hold of than the other two). It's been a while since I played this game through but from what I can remember it was a pretty good game, that's worth getting if you can find it in a bargain bin somewhere. 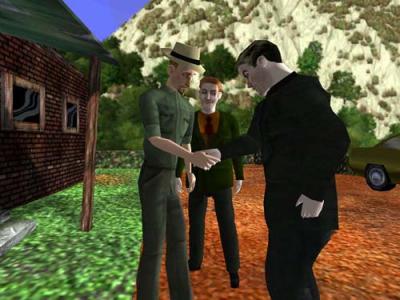 My only issues with 'Blood of the Sacred...' are first and foremost the action-sequences which takes up the entire final part of the game (it took me forever to get the past the chess-board and that damned pendulum). 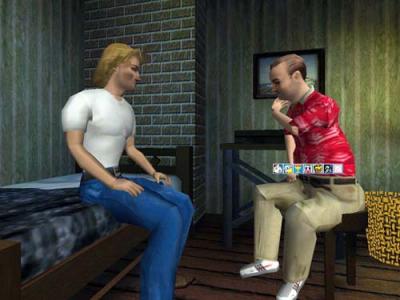 Another problem I have with this game is that the main villain is pretty bland, I didn't realise it then but compared to the sympathetic and three-dimensional antagonists of the previous games the big bad of Gabriel's final case isn't all that interesting and neither are the vampires, although I must admit that I liked the expository scene between Grace and the enigmatic Emilio Baza before the final battle.

Oh, and I won't even mention the infamous 'cat-mustasche' puzzle. In a comedy adventure like 'Day of the Tentacle' it would have worked but in this game it's just ridiculous.


Well, that pretty much all folks. Sadly the chances for a fourth 'Gabriel Knight' game seeing the light of day seems minimal at best. Anyway, thank you for taking your time reading this article, I hope that I've managed to get at least one of you interested in these amazing games.

Thank you, Mrs Jensen and long-live the Schattenjäger.
2
Login To Vote!
More Articles From Borgem

7
Quote O' Matic
Jack Napier: "Stop The Press, Who Is That?"
Added By: System
Batman
An unhandled error has occurred. Reload Dismiss