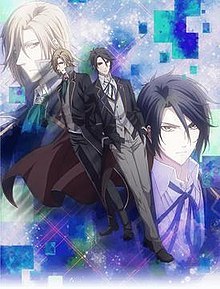 (Butlers～千年百年物語～, "Butlers: A Millennium Century Story") is a Japanese anime television series produced by Silver Link. The series aired from April 12 to June 28, 2018. A manga adaptation began serialization on the Comic Newtype website in January 2018.The anime series is directed by Ken Takahashi at Silver Link and written by Megumi Shimizu, with music produced by Lantis.[1] The series was originally scheduled to premiere in January 2018, but was delayed to an April 12, 2018 premiere due to "various circumstances".[4][5] The series' opening theme is "Growth Arrow" by Oldcodex,[6] and the ending theme is "Hidamari no Niwa (Eternal Garden)" (陽だまりの庭 ～Eternal Garden～) by Sachika Misawa.[2] The series ran for 12 episodes.[7] Crunchyroll streamed the series.[5] Edit A manga adaptation illustrated by Yukari Tōdō began serialization on Kadokawa's Comic Newtype magazine on January 23, 2018.