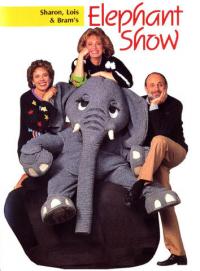 Sharron Hampson Lois Lilienstein and Bram Morrisson first formed their folk singing trio in 1978, after a few years of successful children's albums and touring throughout Canada and parts of the United States, they were given their own children's TV series called The Elephant Show in 1984. Bram's friend and children's entertianer Eric Naglar was also a series regular and Paula Gallivan portrayed the Elephant in the costume. Each episode ended with the song Skinnamarink It aired in the US on Nickelodeon from 1988 to 1996. Lois passed away on April 23 2015. Even though they've slowed down their touring in recent years, Sharon and Bram still occasionally perform as a duo.