The Charlie Horse Music Pizza was a show about music education that aired on PBS back in 1998. It was Shari Lewis's last acting appearence before her death later that year. Ray Charles who composed music that was played during that show had passed away in 2004. The show overall was a Daytime Emmy Award winner. This show was similar to Lamb Chops Play Along except it took place in a pizzeria and it had musical education for young children. Clown Dom Deluise played "Cookie" on the show.

Ending to "My Dog Has Fleas" 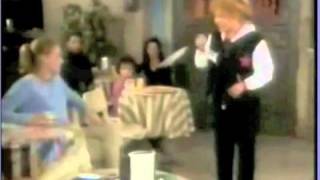 12
Quote O' Matic
George: "Maybe time's gone on strike."
Ringo: "What for?"
George: "Shorter hours."
Ringo: "I don't blame it. Must be very tiring being time, mustn't it?"
George, John, Paul: "Why?"
Ringo: "Well, it's a twenty-four hour day, isn't it?"
John: "You surprise me, Ringo."
Ringo: "Why?"
John: "Dealing in abstracts."
Added By: System
Yellow Submarine
Related Articles

17
MegaSonic
Animated Film Plot, 80s & 90s
why I think animated feature films of the 80s and 90s were good. An analysis of plot.
An unhandled error has occurred. Reload Dismiss